These photos launched the career of social documentary photographer Orin Langelle. Langelle who went on to study under Cornell Capa at the International Center of Photography, spent the next five decades traveling the globe to document peoples’ struggles against social, ecological and economic injustice, including photos from indigenous people’s communities where no other photographers were permitted.

Orin Langelle commented, “These photos from my first assignment reflect a place and time that can feel oddly contemporary yet unique in American history. As today we see the country split down the middle, my photos from 1972 reflect a very similar, yet also very different schism. In the 60s and 70s we saw a rising up of a radical left youth movement, not just in the U.S. but around the world. Today we see communities split due to rhetoric by politicians and their pundits. In a time of climate crisis that seems absurd to me.”  READ MORE after photo essay 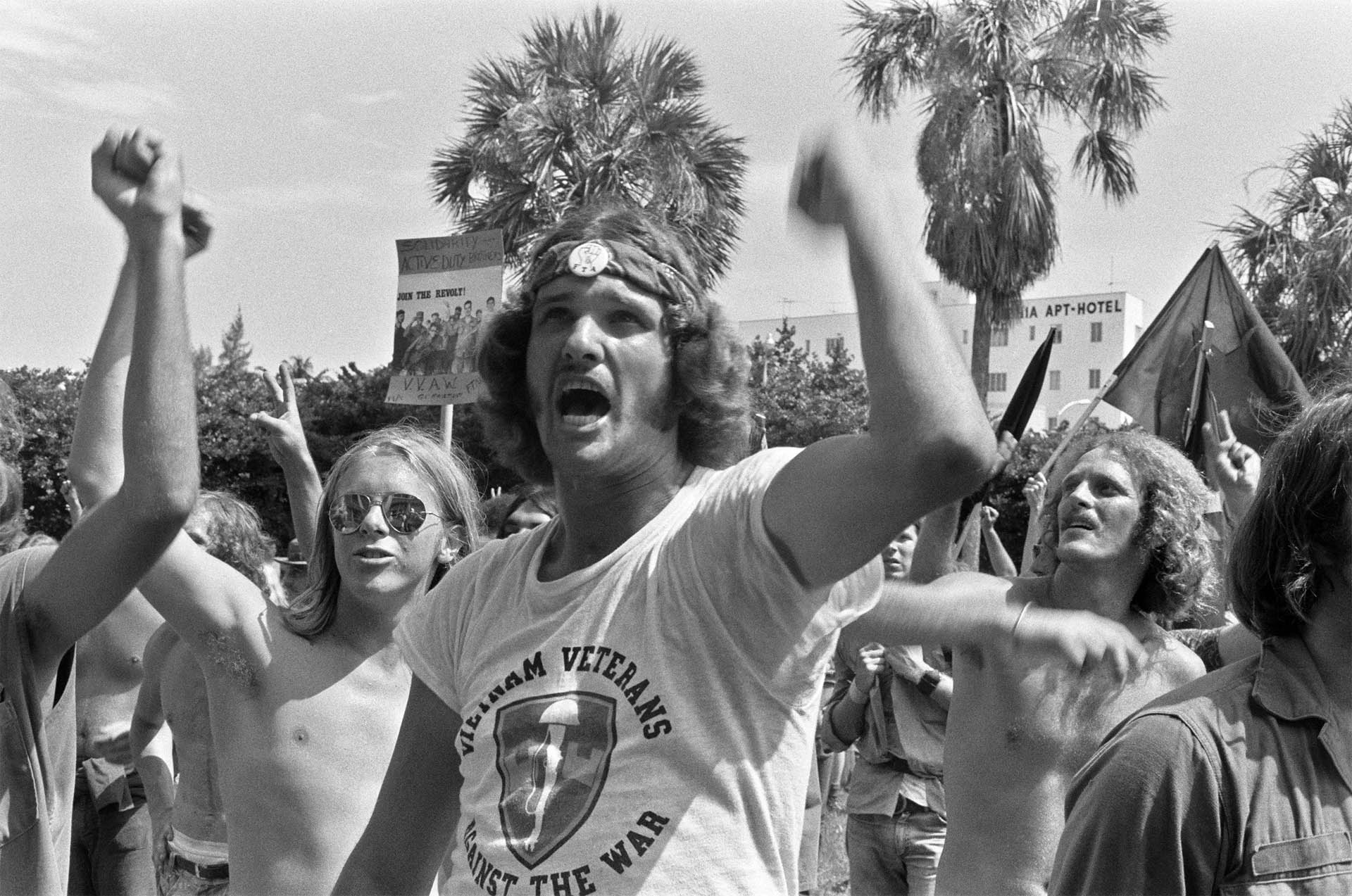 Miami Beach, FL 1972: Members of Vietnam Veterans Against the War (VVAW) show their outrage as they protest the lives lost (both U.S. and Indo-Chinese) in the Vietnam War. Both VVAW members along with thousands of anti-war demonstrators massed at the convention to show opposition to the war. 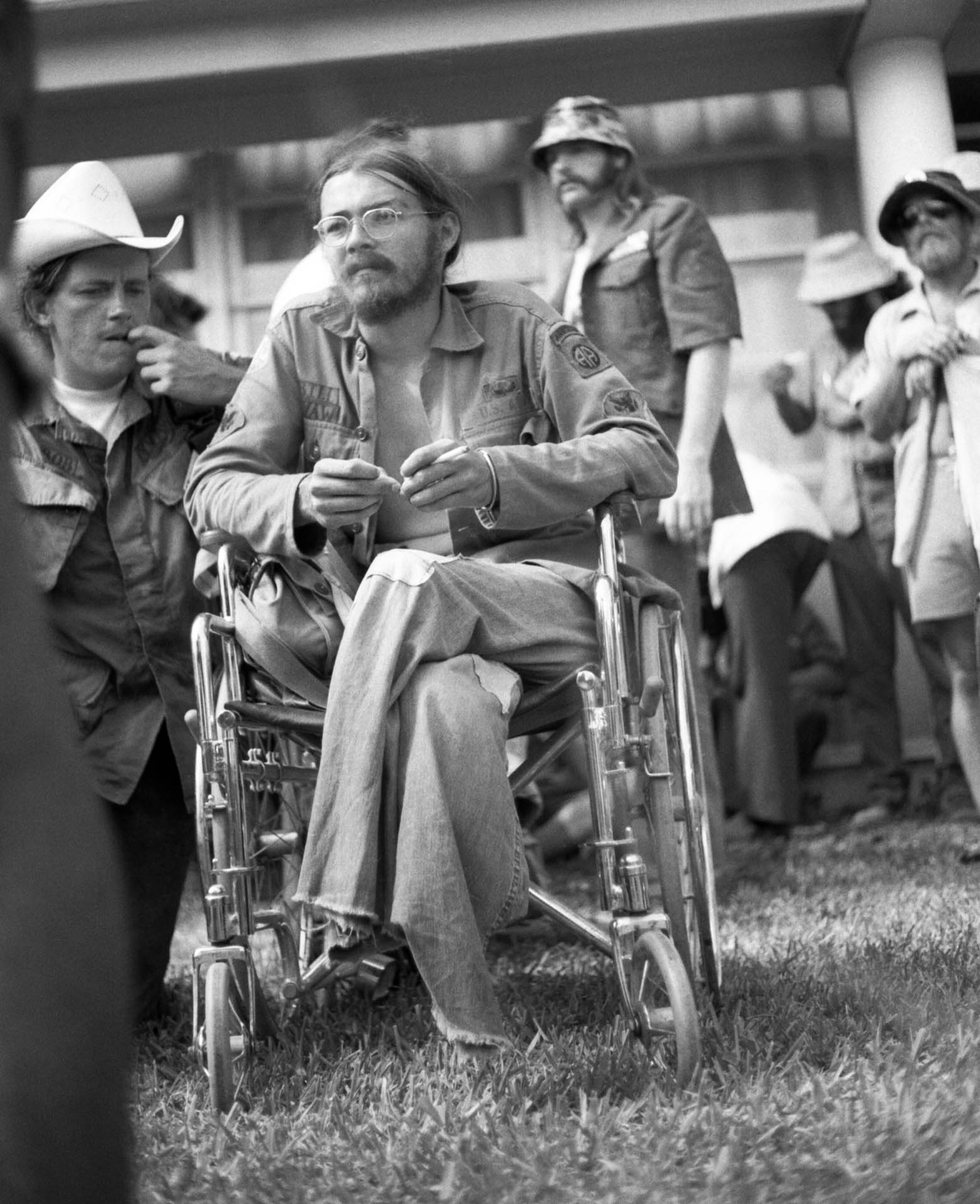 Wounded soldier from Vietnam Veterans Against the War (VVAW) in a wheelchair during protests against the RNC. He was one of over 200,000 U.S. casualties in that war. 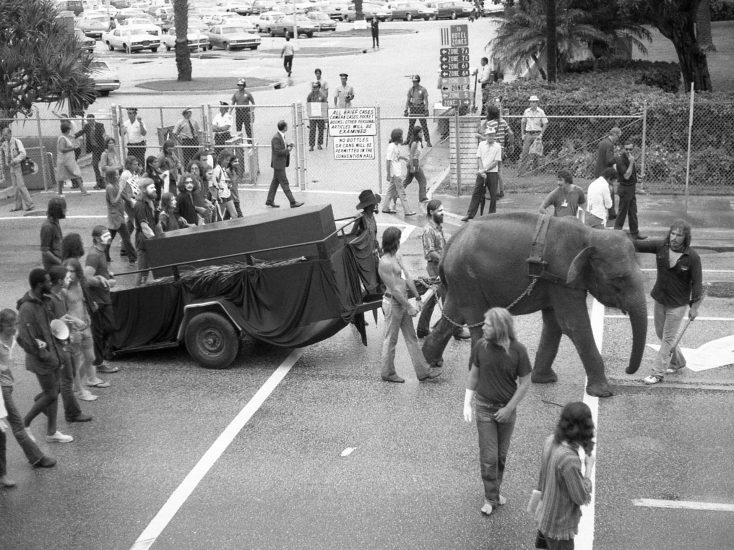 The Republican Party’s symbol, an Elephant, pulls a coffin alongside protesters past the entrance of the RNC 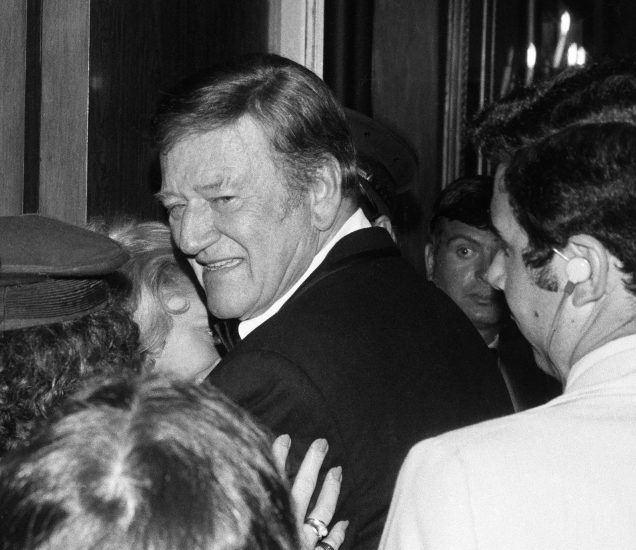 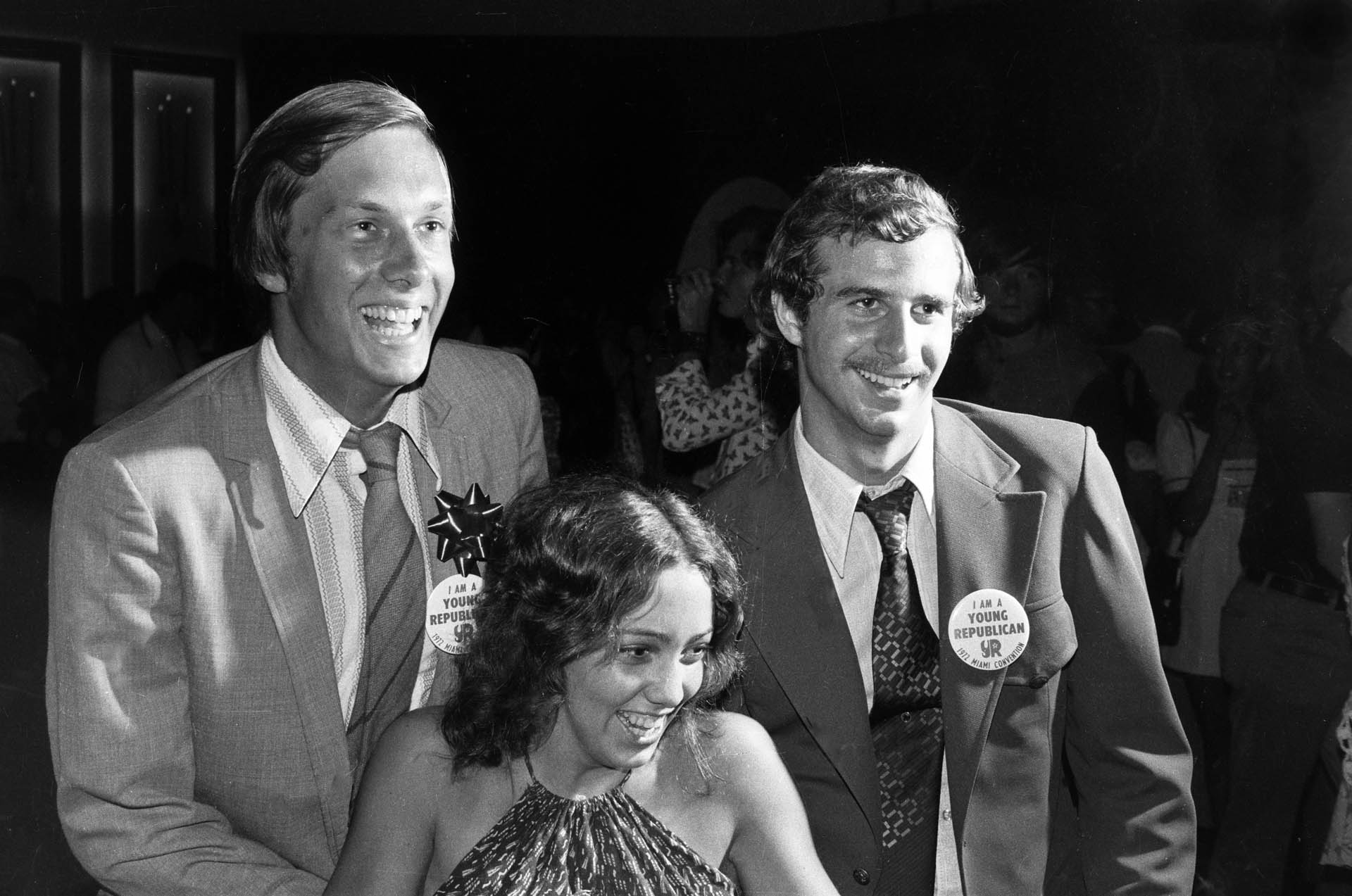 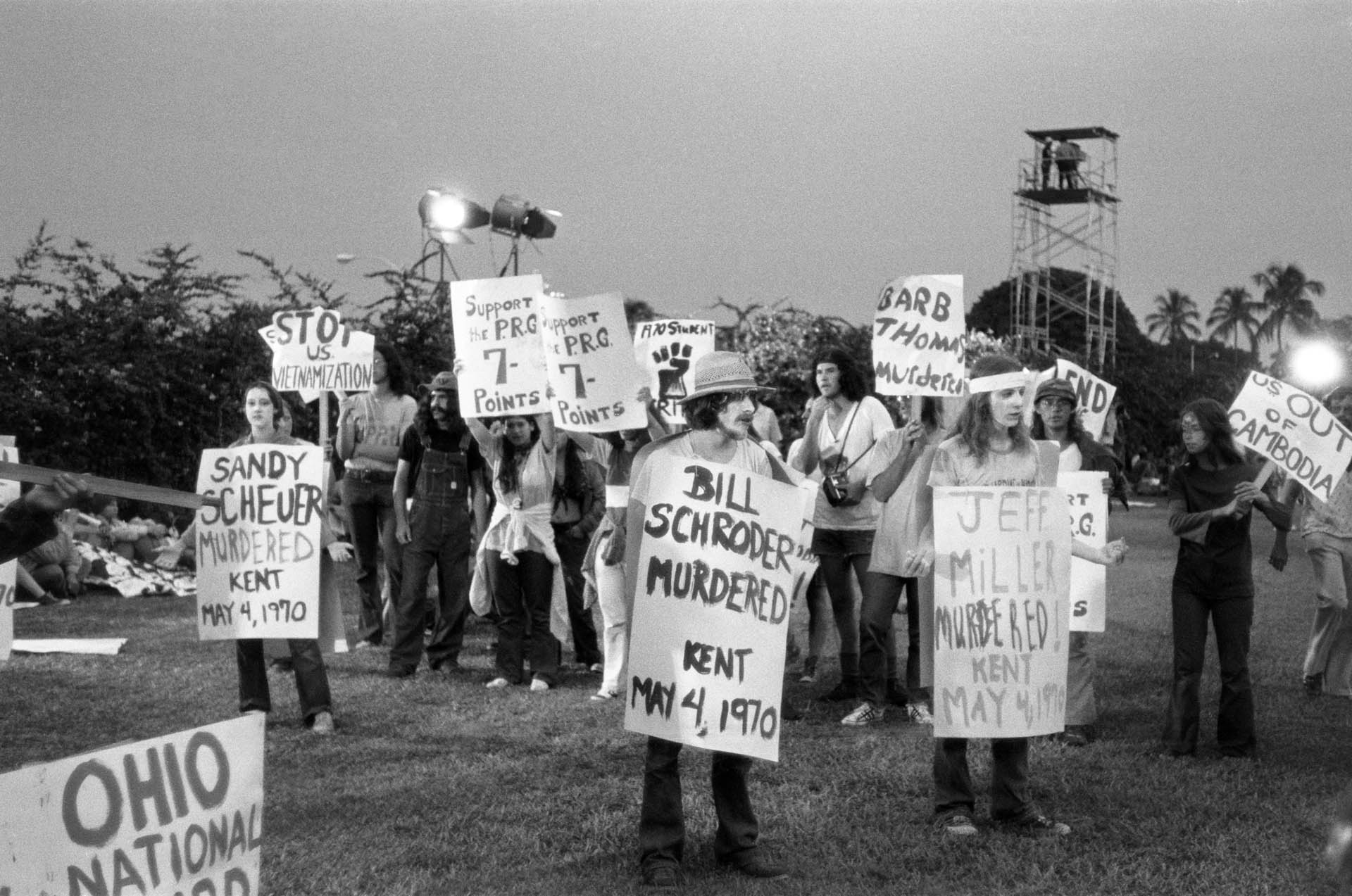 Demonstrators commemorate the Kent State massacre that occurred at Kent State University in Kent, Ohio. The massacre involved the murder of four unarmed college students by the Ohio National Guard on May 4, 1970 during a demonstration against the Vietnam War. Nine other unarmed students were shot, one suffered permanent paralysis. 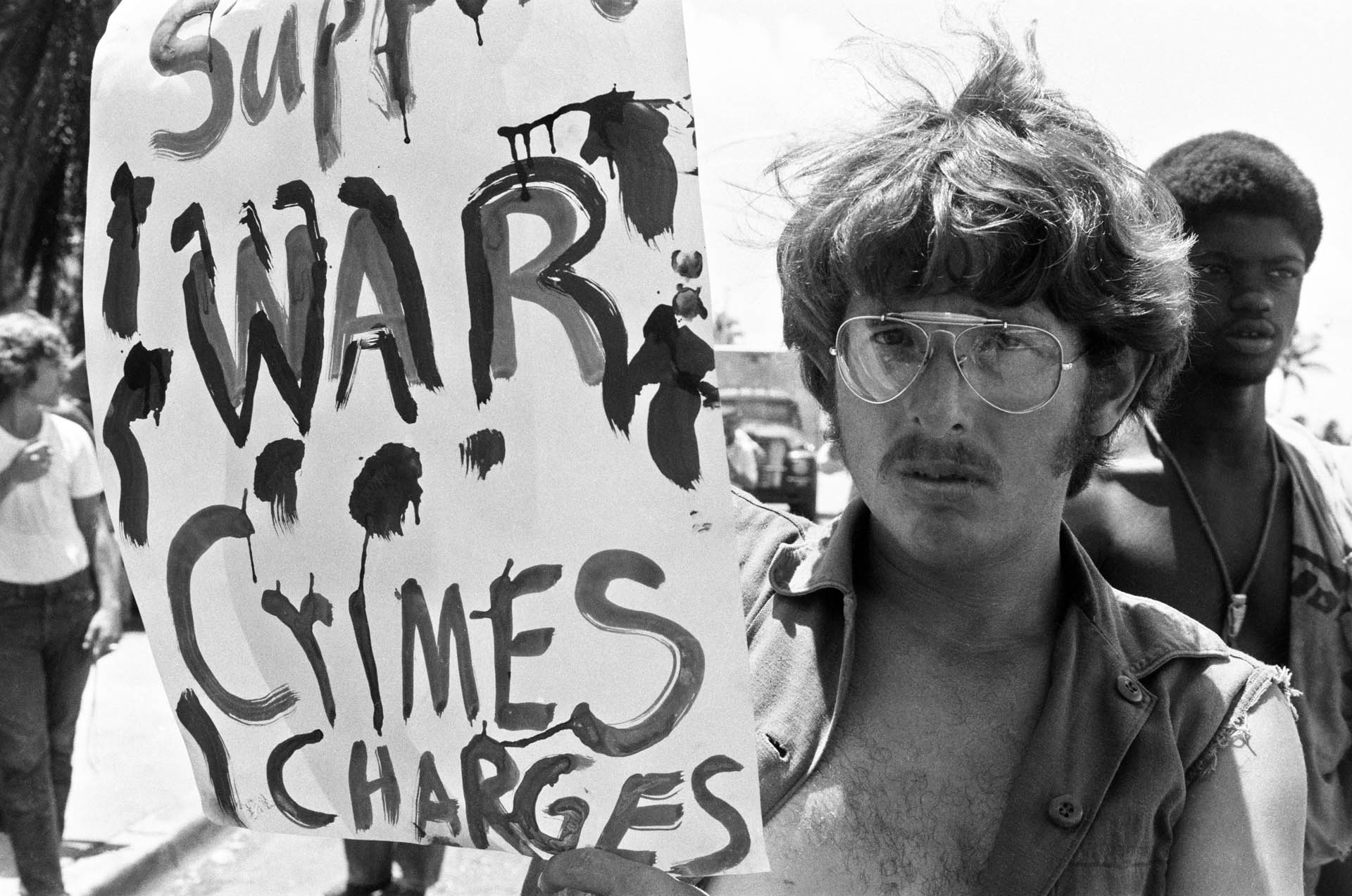 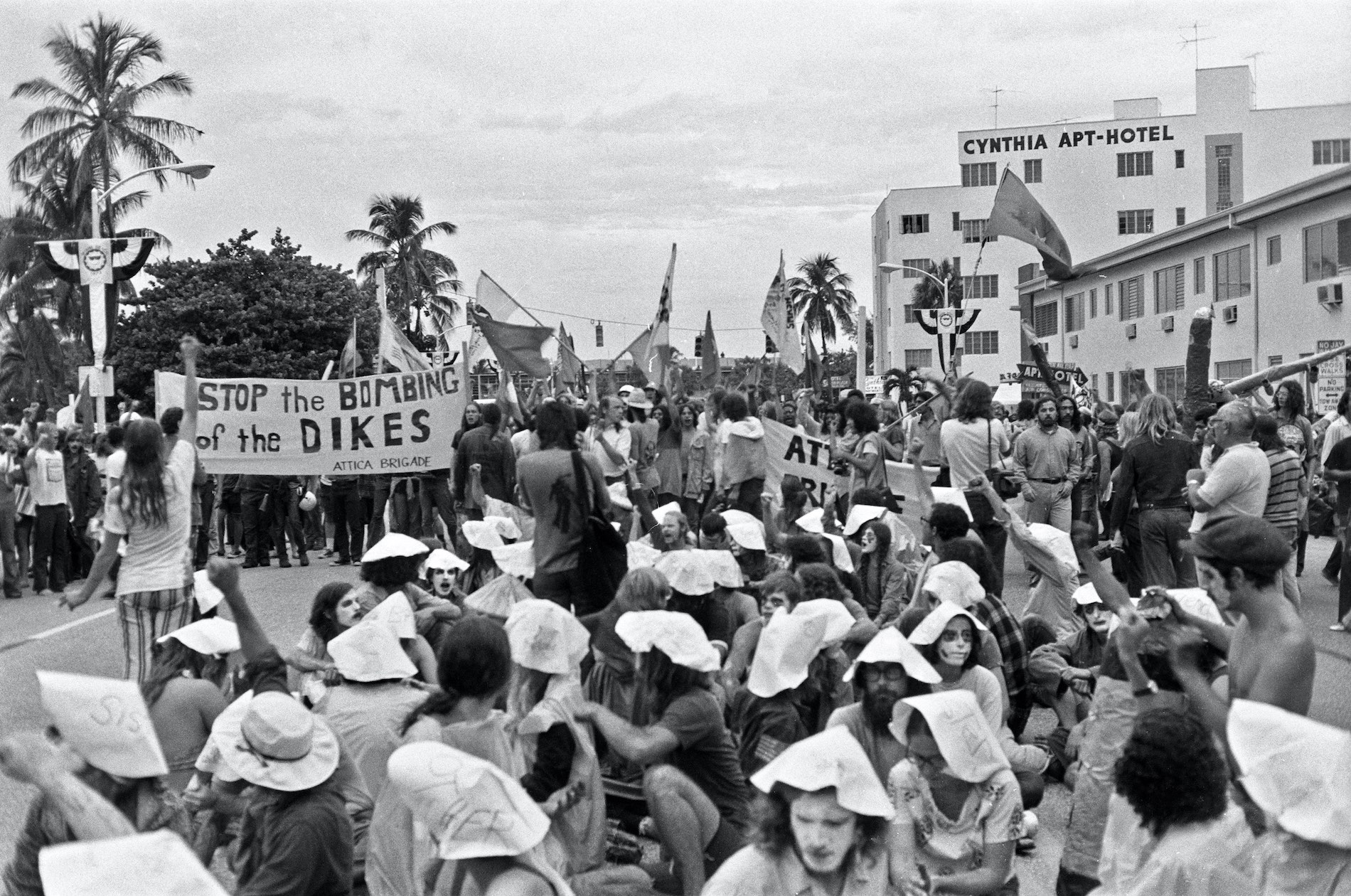 Stop Bombing the Dikes protest. Accusation arose that the US was bombing parts of the 2500 miles dikes on the Red River. Independent sources say the US did bomb the dikes. If the bombings would have been more widespread, flooding would have affected 15 million peasants. 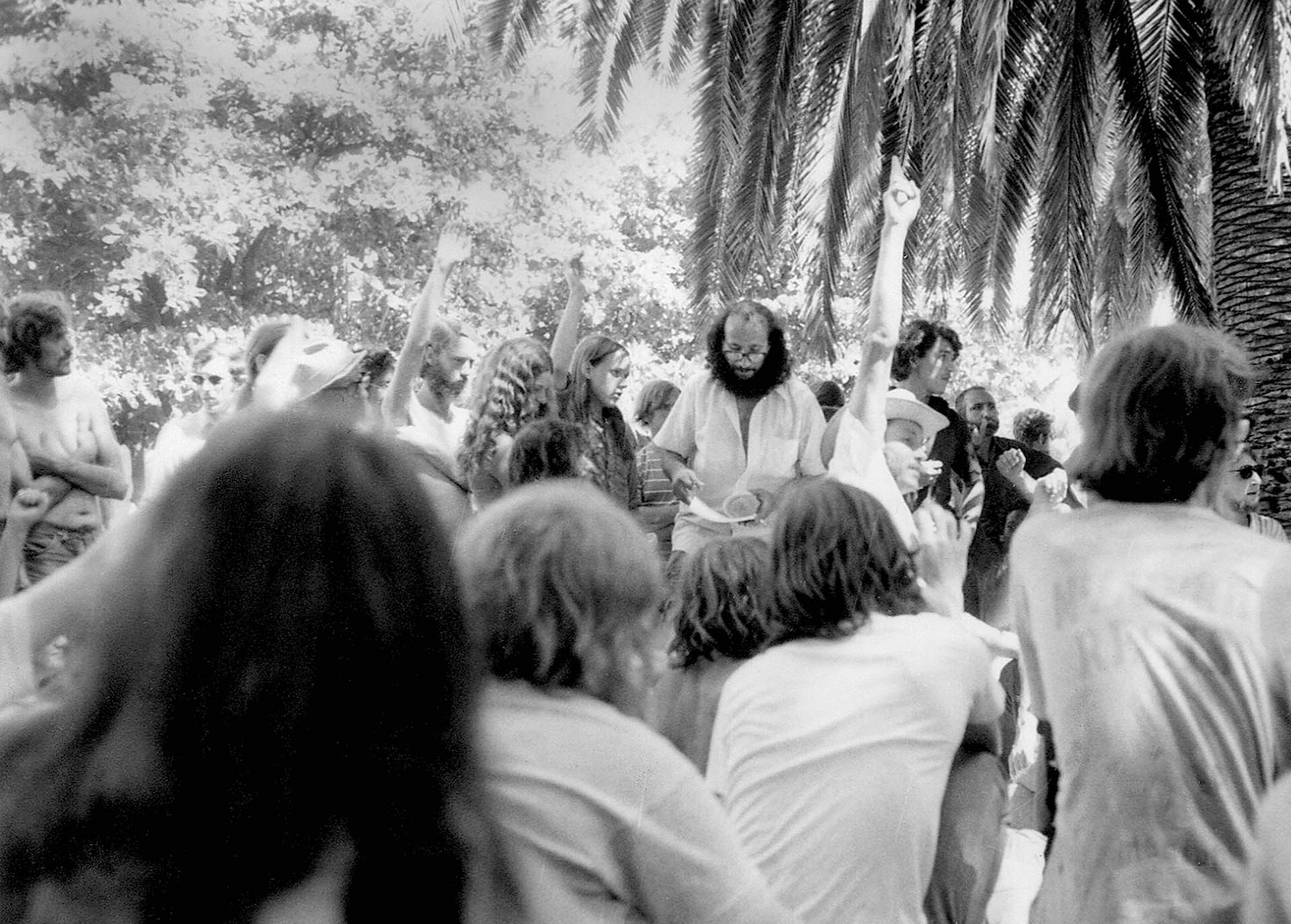 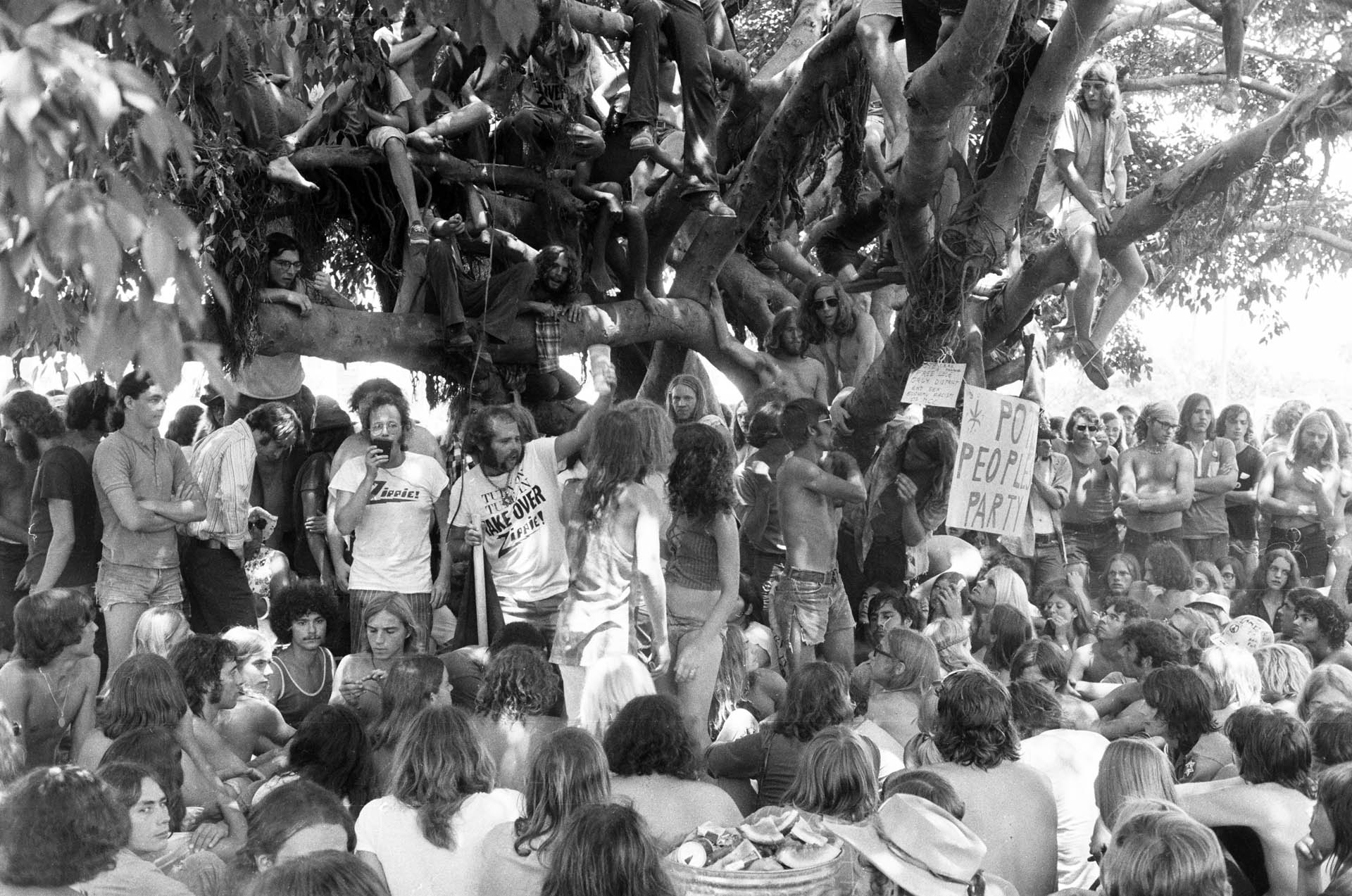 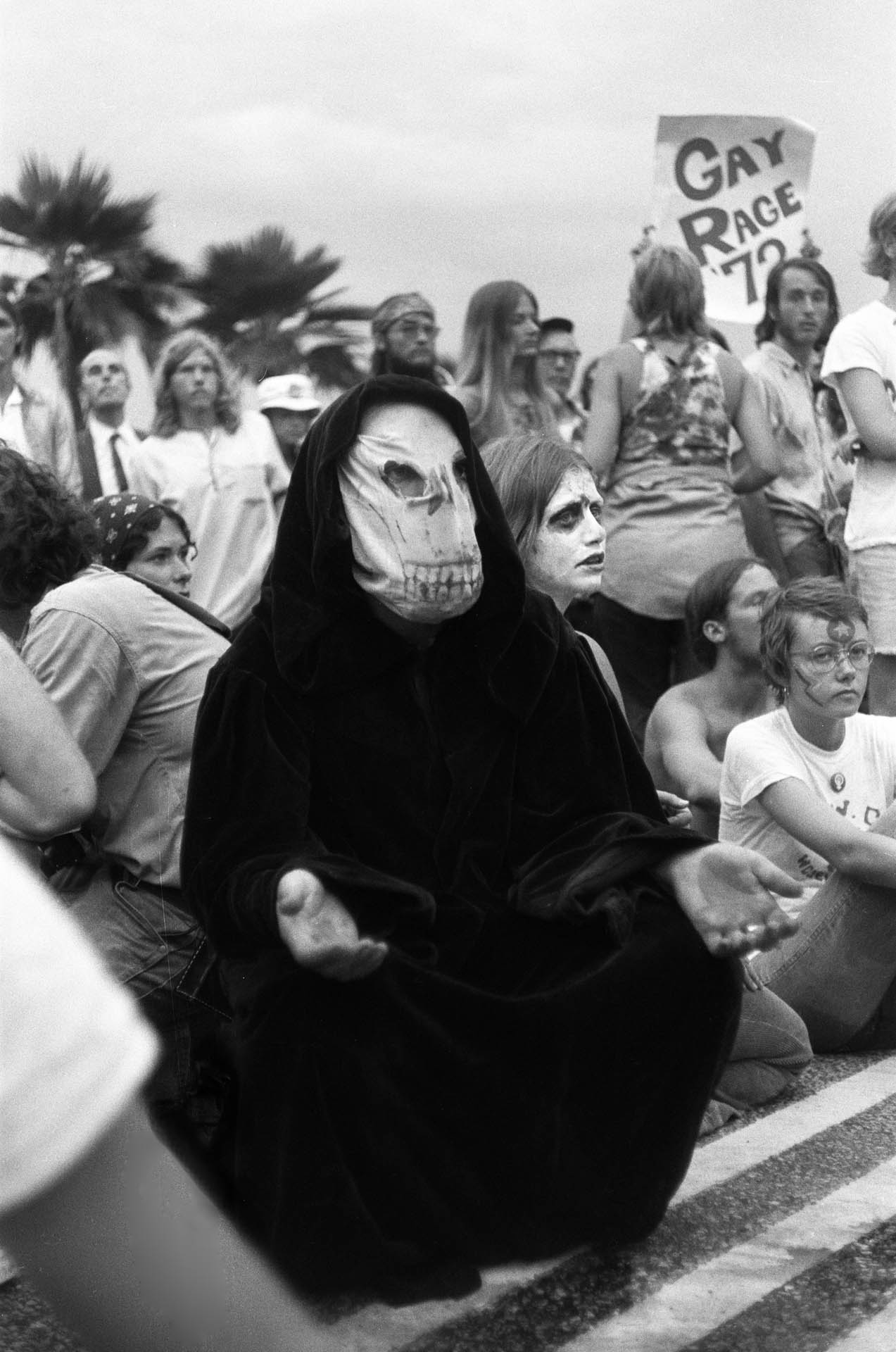 Other issues were spotlighted during the anti-war protests, such as gay liberation. 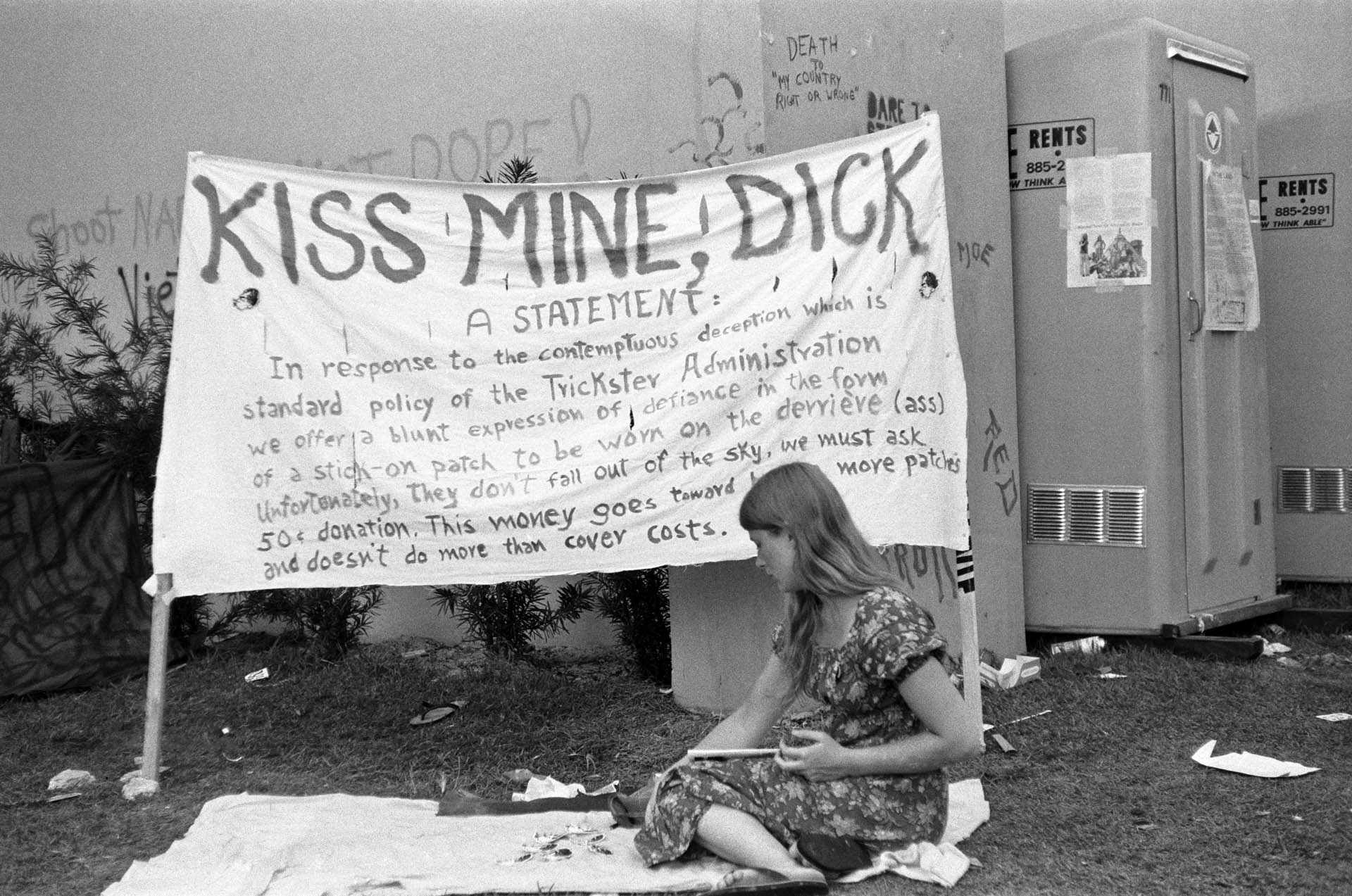 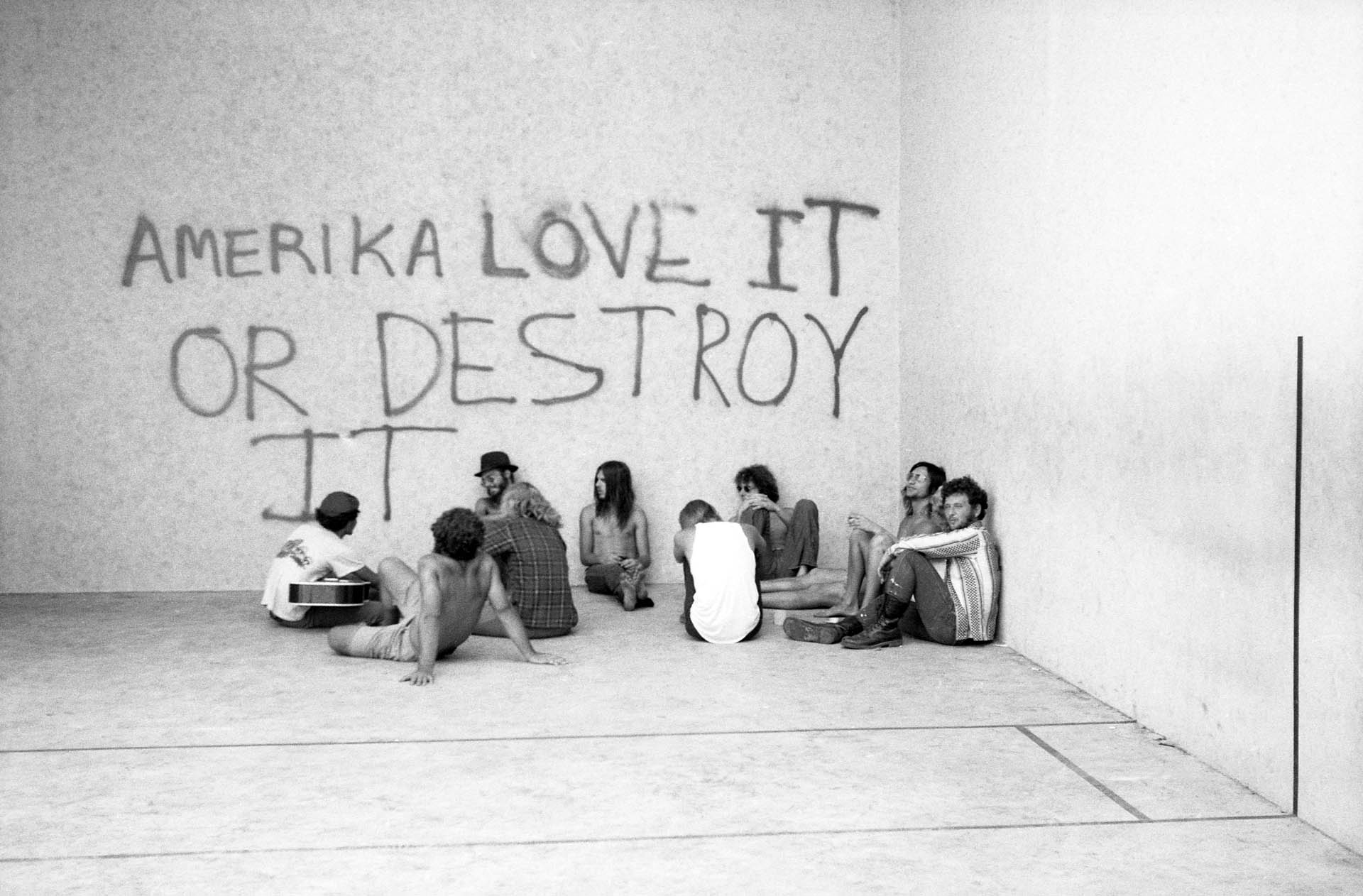 Protesters, fed up with draft orders for the Vietnam war, in what later was called an “imperialistic” venture, show their disgust for the war. The fighting claimed nearly 60,000 U.S. lives with more than 200,000 U.S. casualties along with more than 3,000,000 people from Indochina who were killed in the war. It is estimated that between 50,000 and 150,000 US Vietnam veterans committed suicide after the war officially ended. Toxic chemicals like Agent Orange, used during the war, continue to have tragic health effects on people in Vietnam as well as U.S. soldiers who served there. 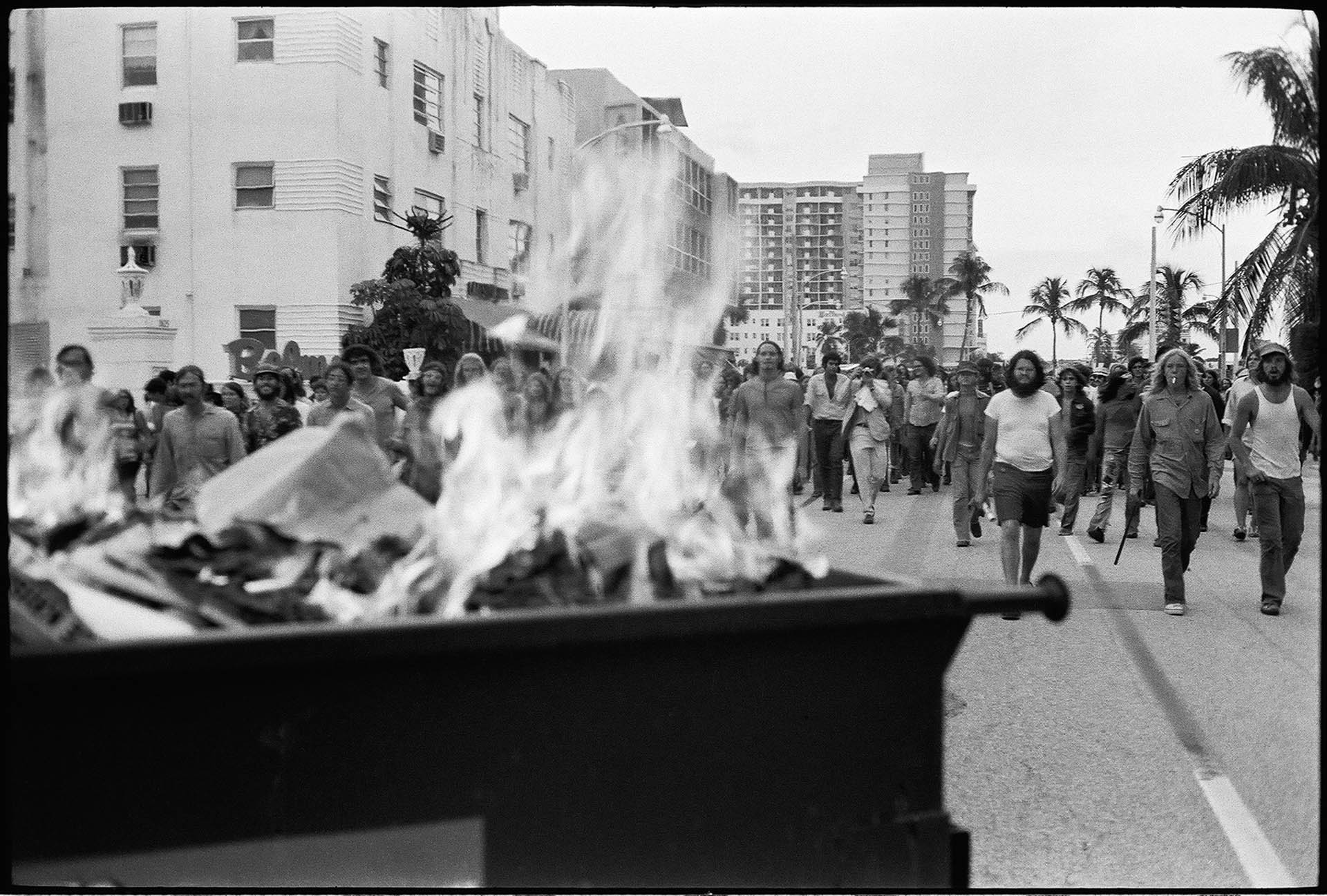 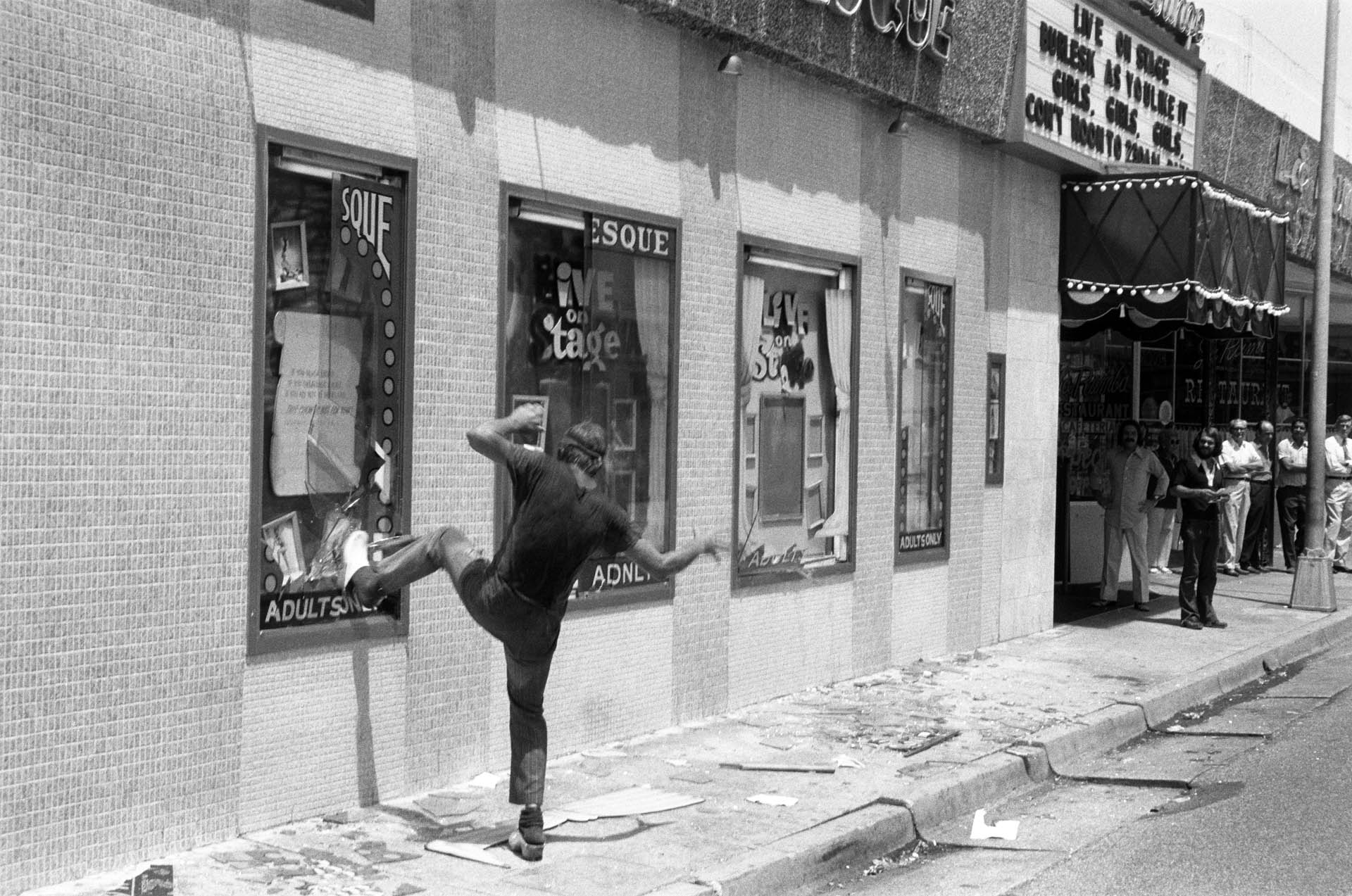 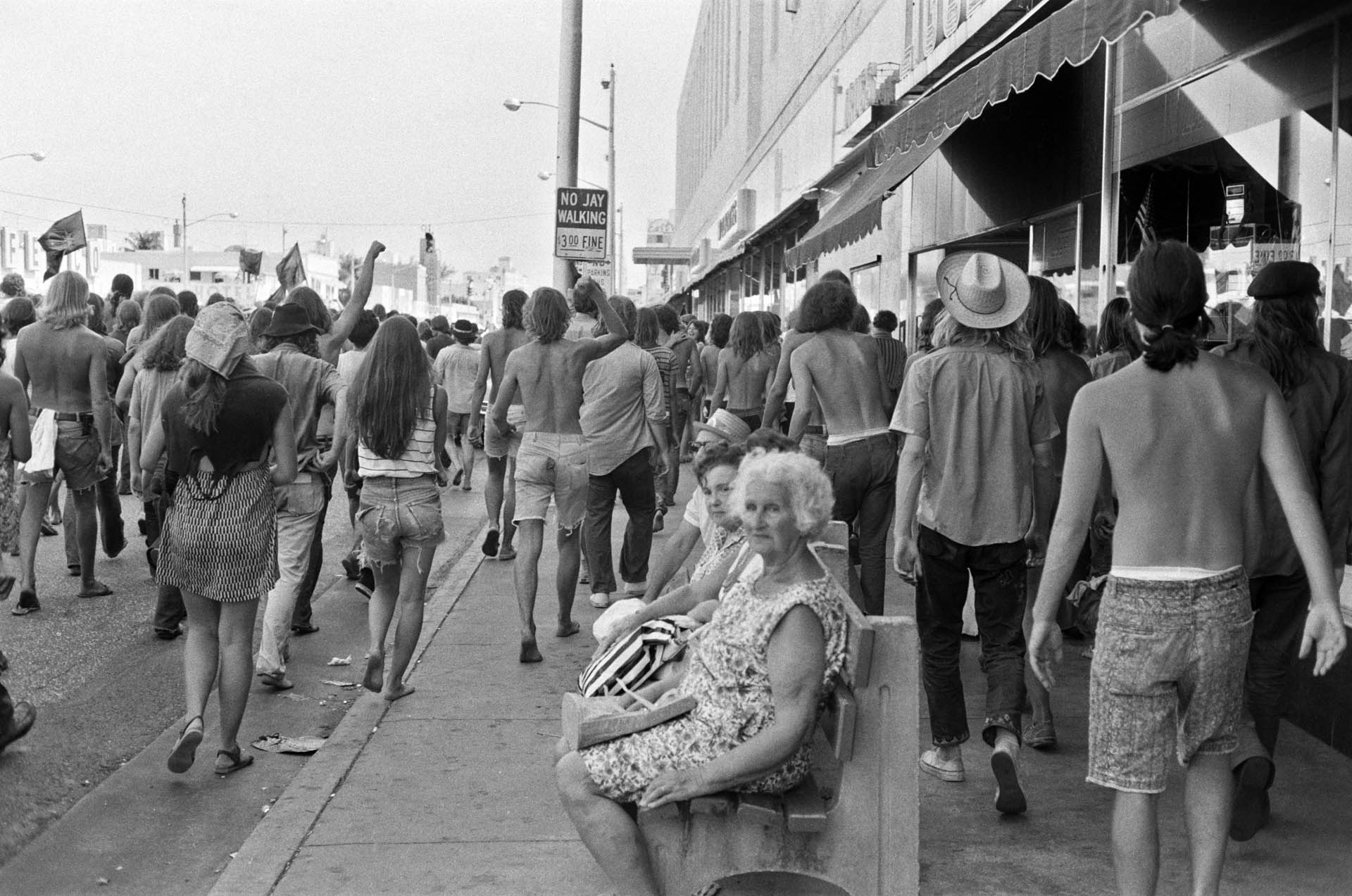 A clash of cultures: In 1972, at the height of the Vietnam War and the youth counter-culture, the gap between the generations and cultures seemed insurmountable. This photo shows one generation marching forward while the other looks back.

“I have had the opportunity to work with Orin Langelle for the past three decades. I have seen the power of his photographs that document the strength and resilience of people from many cultures who are standing up against the power and greed of corporations and the governments. People who are defending their land from the destruction caused by mining, hydroelectric dams, and logging for industrial tree plantations and genetically engineered crops. These photographs have been both inspirational and difficult to view, but have importantly highlighted the people and their struggles in ways that mere words cannot,” added Anne Petermann, Executive Director of Global Justice Ecology Project.