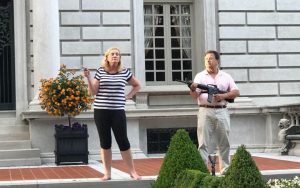 On the evening of Sunday, June 28, protesters were marching to St. Louis mayor Lyda Krewson’s home to protest her release of names and addresses of individuals supporting the defunding of police.

Phillips and Langelle previously released a joint statement regarding the misuse of “less lethal” weapons by police against popular uprisings in the U.S. and Chile respectively. https://globaljusticeecology.org/joint-statement/

Regarding the incident on Sunday, Phillips stated:

“The McCloskeys created a dangerous situation by brandishing weapons at a peaceful crowd headed toward St. Louis Mayor Lyda Krewson’s home. That was the only reason the demonstrators stopped there. The protest destination was not the McCloskeys, but the home of the Mayor, several blocks away.”

“I reject the McCloskey’s press statement claiming support of Black Lives Matter because if that were the case, they would not have threatened the very lives they claimed to support.”

Orin Langelle stated: “This disgusting display was typical of the wealthy and those who live in mansions versus the ‘others’ in this world who are supposed to wait for some ‘trickle down’ magic that never quite materializes.”

“Thanks to Black Lives Matter, these contradictions are being brought to light and now hopefully the people will succeed in advancing systemic change – politicians only put bandaids on gushing wounds.”

Additionally, less than two weeks ago, Chris Phillips was the guest on Earth Watch, a GJEP partnered show that runs every Thursday on Margaret Prescod’s Sojourner Truth. It is a nationally broadcasted program on Pacific Radio in Los Angeles, CA. https://globaljusticeecology.org/chris-phillips/

2 Responses to “STATEMENT REGARDING BRANDISHING OF WEAPONS AT PROTESTERS IN ST. LOUIS”