All photos are by Orin Langelle/GJEP
–
Buffalo, NY – 14 June 2020 – Around 100 people came to the city’s Columbus Park to protest the Columbus statue and demand that it be taken down. All across the country, people are taking steps to remove racist monuments and change the name of parks and other public facilities that celebrate the brutal slave-holding legacy of the Confederacy and its most prominent figures. The Confederacy served to cover up the moral outrages of slavery and dismiss the voices outrages of slavery and the voices of African-Americans whose ancestors were held in bondage, systematically kidnapped, beaten, and sexually assaulted. 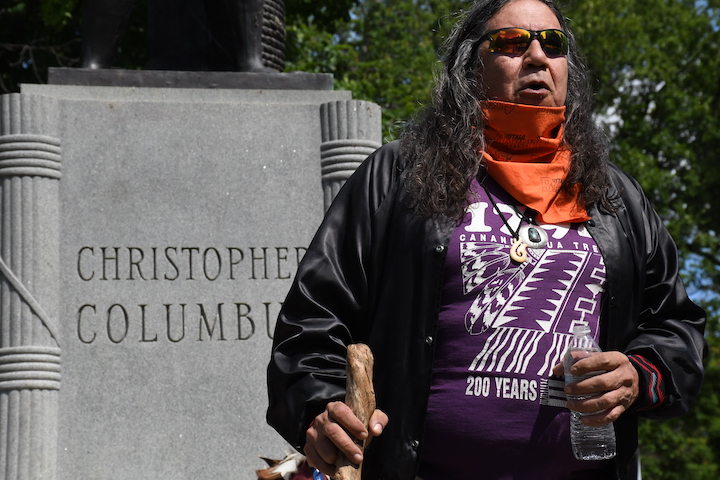 KEN-A-RAH-DI-YO speaks to the protesters gathered in Columbus Park. He passed the statement (further down in this post) to the crowd. KEN-A-RAH-DI-YO is a representative for International Native Traditional Interchange (INTI) and is involved with the the UN Permanent Forum on Indigenous Issues (UNPFII).

Many Indigenous Peoples and their supporters are calling for the City of Buffalo to change the name of Columbus Park and to remove the monument that now stands there in honor of Christopher Columbus. 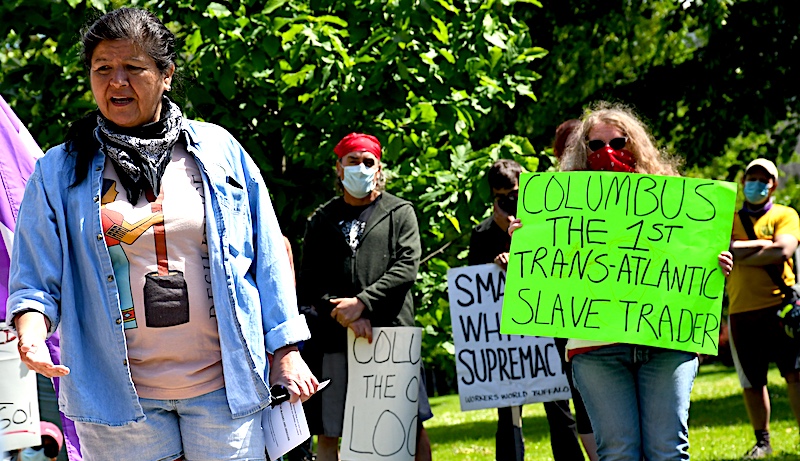 One Indigenous person in attendance told the crowd, “I don’t believe the city will voluntarily take the statue down. We’ll have to do this ourselves.” Those words were met with applause from those in attendance. 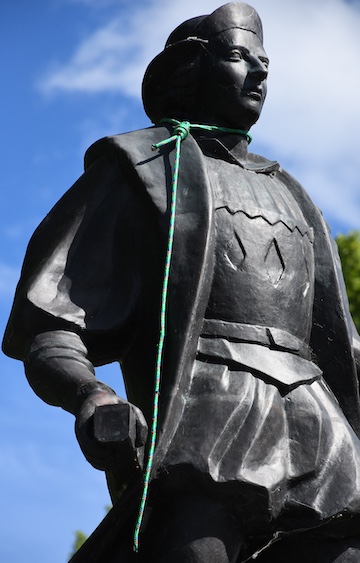 The petition to the City of Buffalo says:

“Columbus did not ‘discover’ anything – the Americas were inhabited by a great diversity of people and cultures. Instead, Columbus established the beachhead for ruthless conquest and settler colonialism and inaugurated the genocidal devastation of whole continents. Many millions of people lived in the Western Hemisphere before the arrival of Columbus, untold numbers of them killed by disease. But disease was not the only, nor the cruelest, of the demons that arrived with Columbus.”

“Bartolome de las Casas, who began as an enslaver of the native Taino people of Hispaniola, whom Columbus had “discovered,” wrote of, “…the massacre of these wretches, whom they have so inhumanely and barbarously butcher’d and harrass’d with several kinds of torments, never before known, or heard… of three millions of persons, which lived in Hispaniola itself, there is at present but the inconsiderable remnant of scarce three hundred.” Columbus personally launched the enslavement and genocide of Native people and the colonization of the Hemisphere which would be his legacy.

KEN-A-RAH-DI-YO’s statement passed to the crowd: 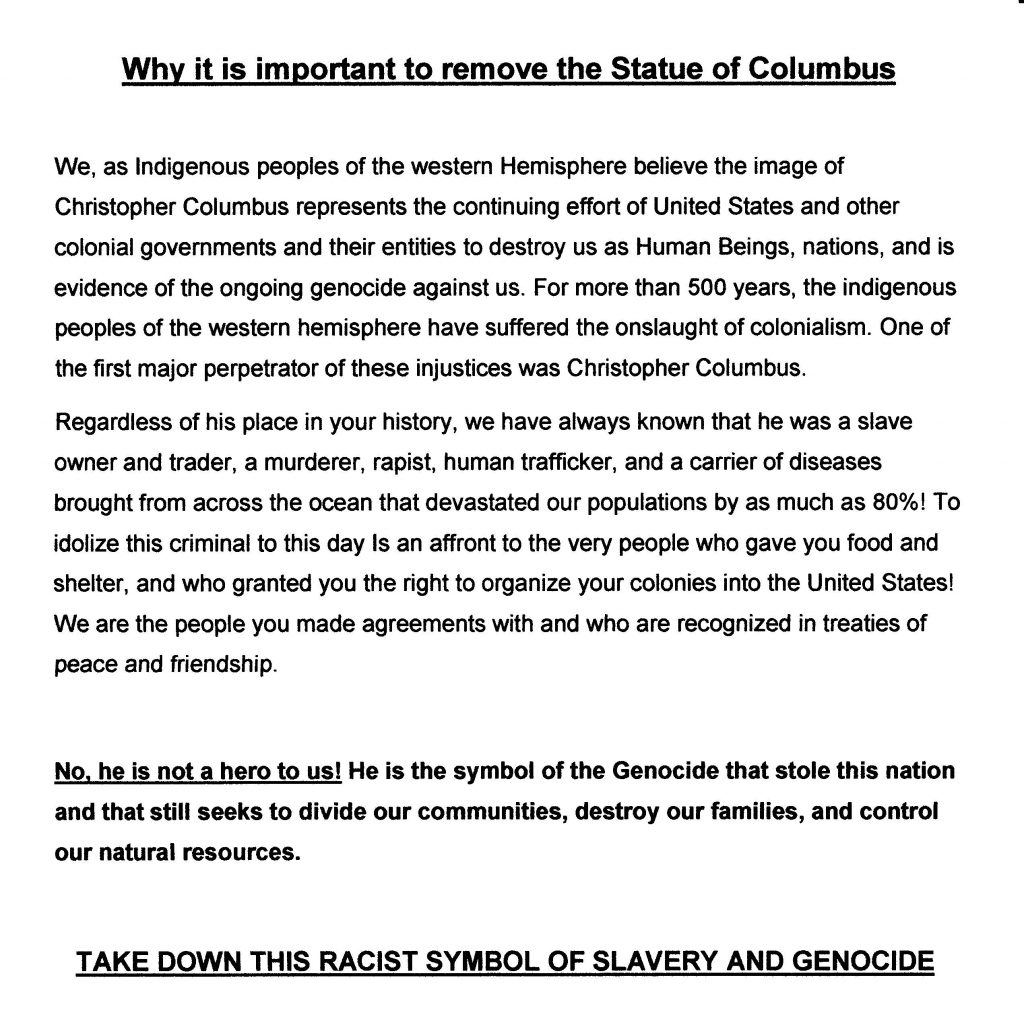 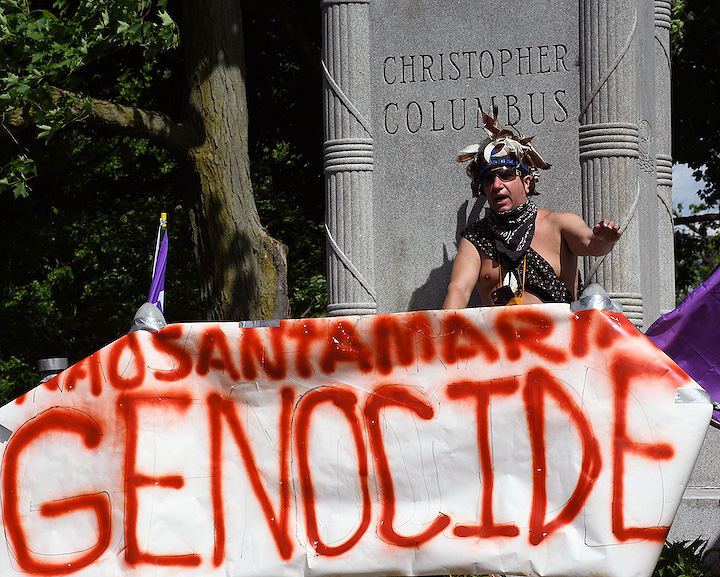 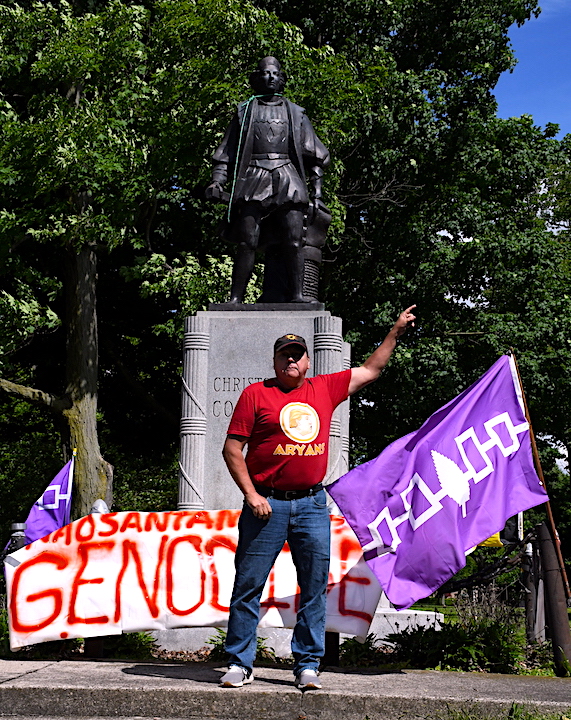 John Kane is a Mohawk who is a radio host and producer, who broadcasts from the Cattaraugus Territory of the Seneca Nation 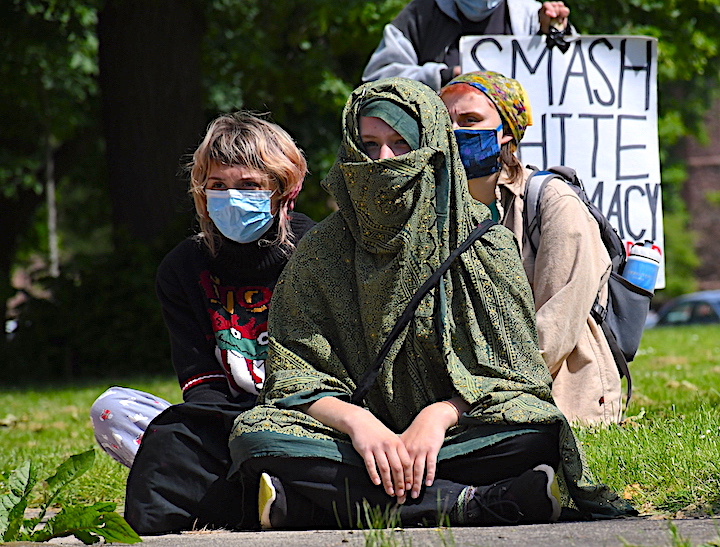 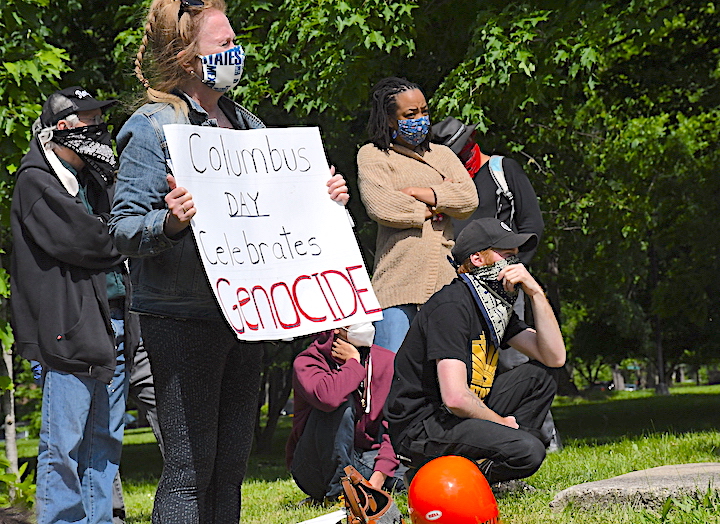