The afternoon started as a march. It progressed into what seemed like a street party with street fighting on the side…

All photographs by Orin Langelle/GJEP 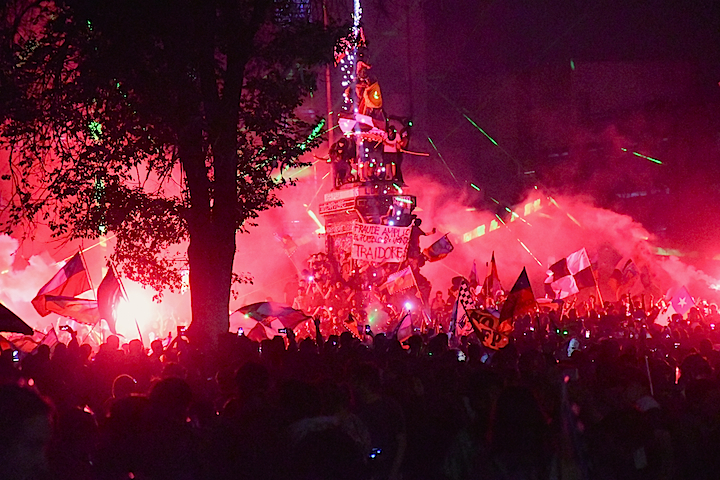 Chileans Take to the Streets on Day 50 of the Mobilizations

Santiago de Chile—Yesterday, 6 December was the global climate march. People marched around the world demanding action on climate change to prevent the irreparable decline of the Earth’s life support systems to the point where the anthropocene-driven mass-extinction already taking place includes human beings as well. 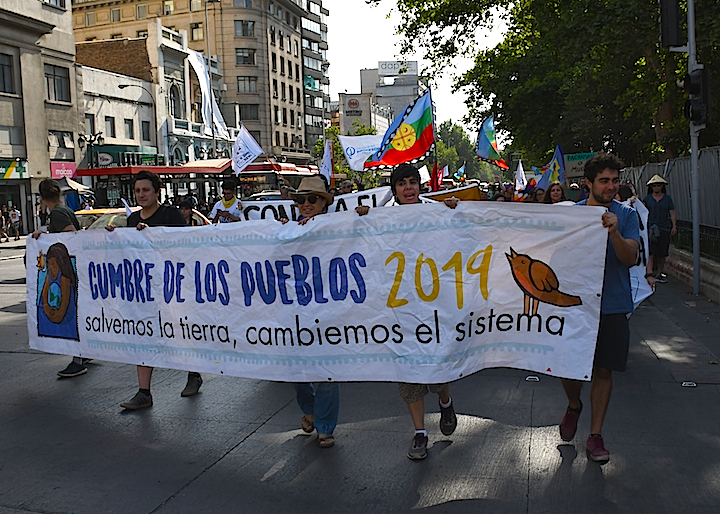 The Santiago climate march bloc was led by the Cumbre de los Pueblos or People’s Summit, organized by the Observatorio Latin Americano de Conflictos Ambientales (OLCA) and other groups. The Cumbre brought together activists, campesinos, Indigenous peoples and others from across Chile and around the world to discuss the root issues of climate change and the destructive impacts of neoliberal market-driven false solutions being promoted by industry and the UN.

And while many marches included the slogan “system change not climate change,” in Santiago, Chile, the Climate March was part of the larger weeks-long mobilization that is taking the streets, not to demand reforms, but to create that systemic change. 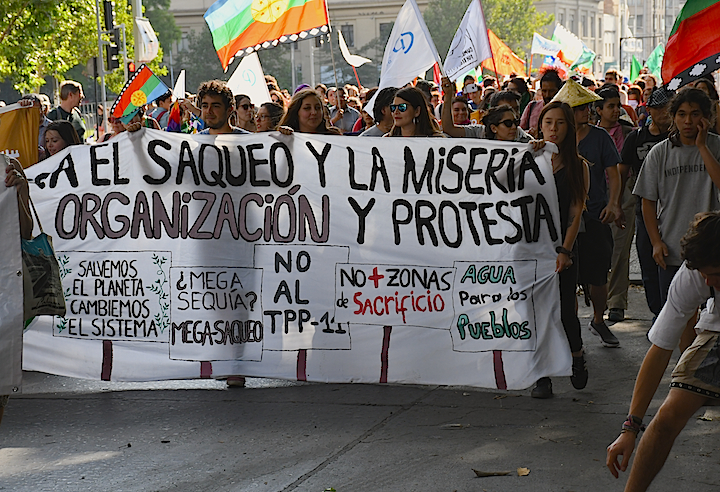 The Cumbre was originally organized in two parts to offer an alternative, first to the APEC summit planned for mid-November in Santiago; then the COP25 Climate Summit planned for 2-14 December here. In mid-October, however, the ground shook here in Chile and the pent up rage and frustration of the people was unleashed.  The streets and plazas were taken over by jovenes (youth) and others demanding an end to the repressive constitutional laws and neoliberal policies ushered in under the Pinochet Dictatorship; policies that gave away the ancestral land of Mapuches and campesinos to timber companies for timber plantations, and privatized basic social services ultimately leading Chile to have the greatest income disparity in Latin America. 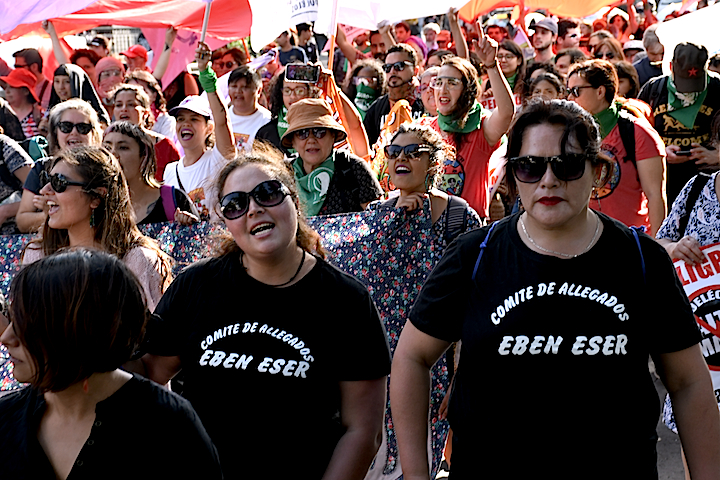 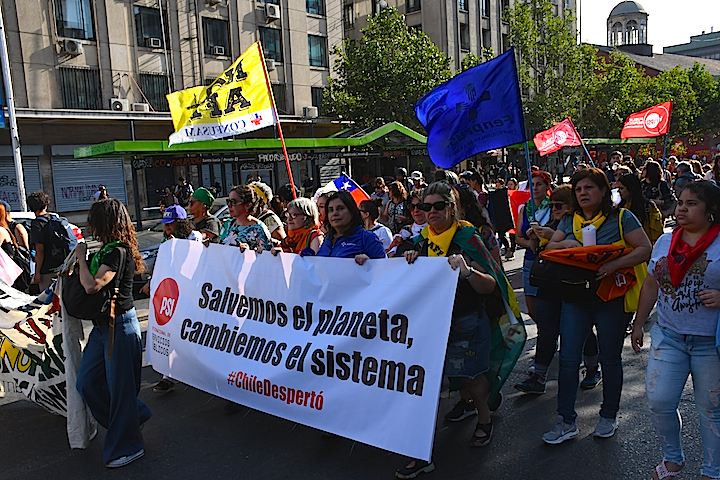 La Alameda is the main avenue of Santiago 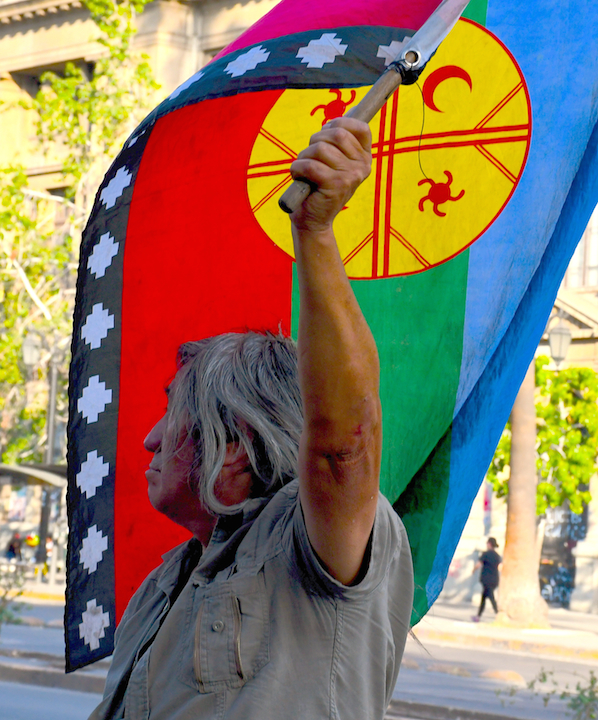 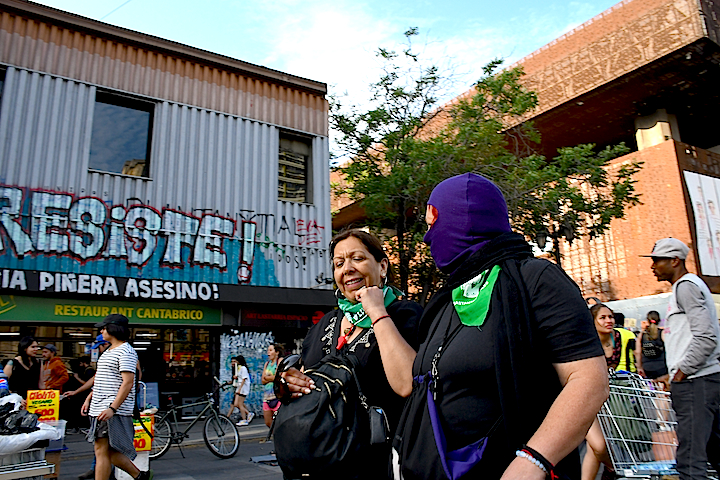 Women going to the march 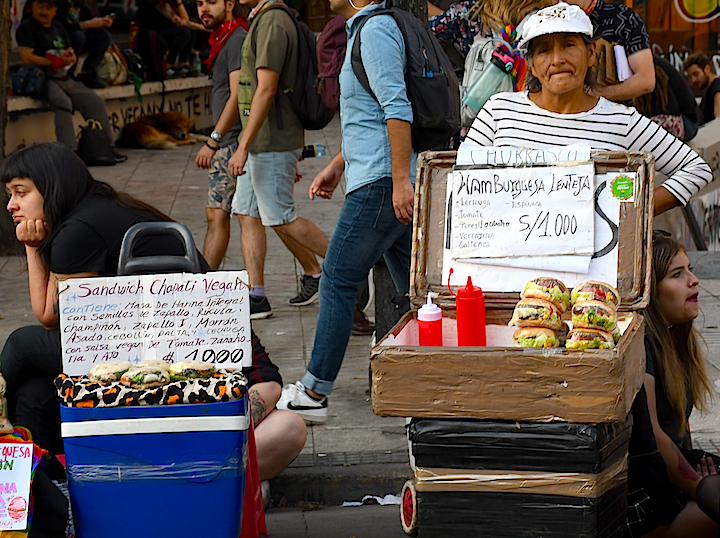 Along the march, the street was lined with vendors 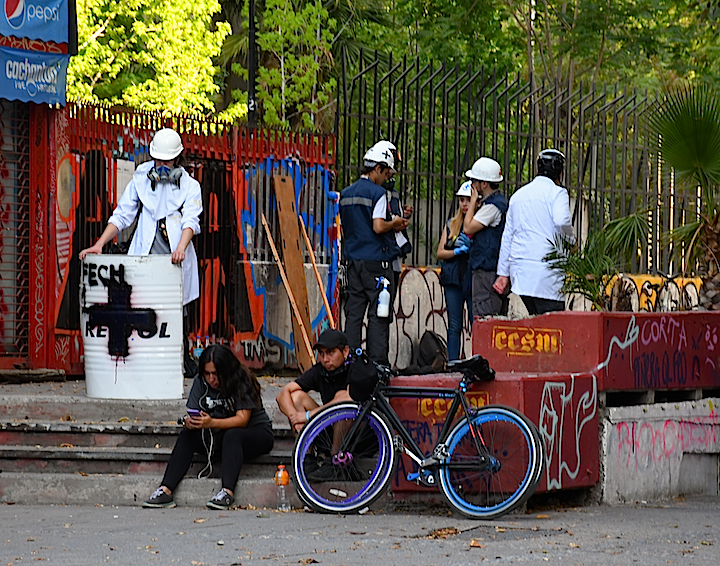 The emergency street medics. The medics are targeted and attacked by the Carabineros (national police)
frequently during marches due to their immediate assistance to protesters in need.

APEC was chased away first, and then Chile canceled the climate COP. Chile’s former colonial ruler, Spain, stepped up and saved the day, offering to host the climate summit at the last minute, and allowing Chile to retain the COP Presidency. This allowed Chile to avoid having a global audience for the mass mobilizations in its cities, as well as the rampant human rights abuses denounced by Amnesty International and Human Rights Watch. Carabineros, the national police in Chile, have been accused of rape and torture and have caused nearly 300 eye injuries by firing shotgun shells filled with rubber-coated metal pellets directly at protesters’ faces. 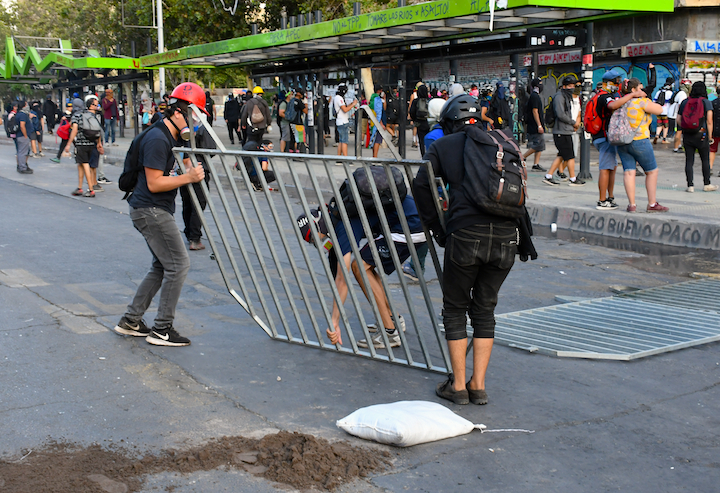 Protesters prepare to set up a blockade on La Alameda 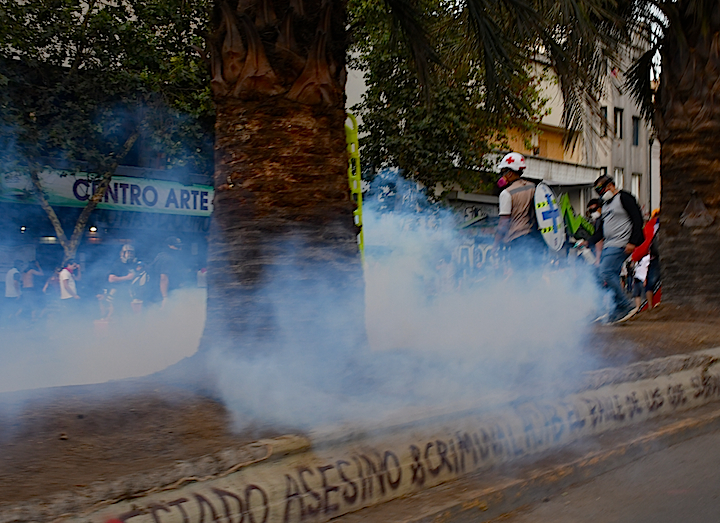 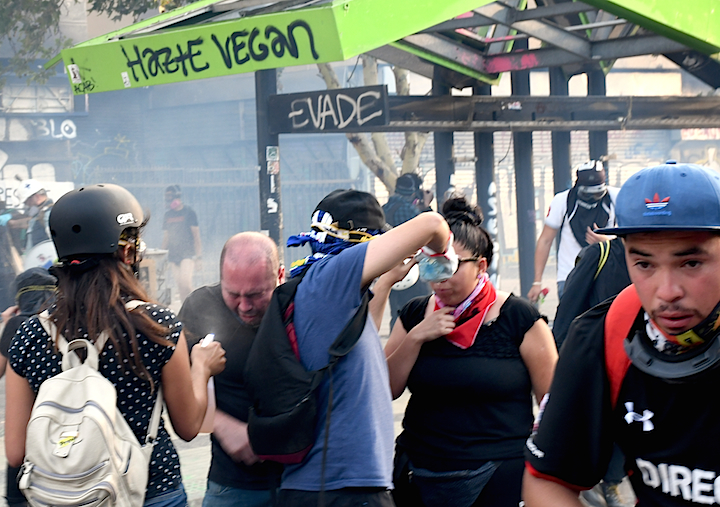 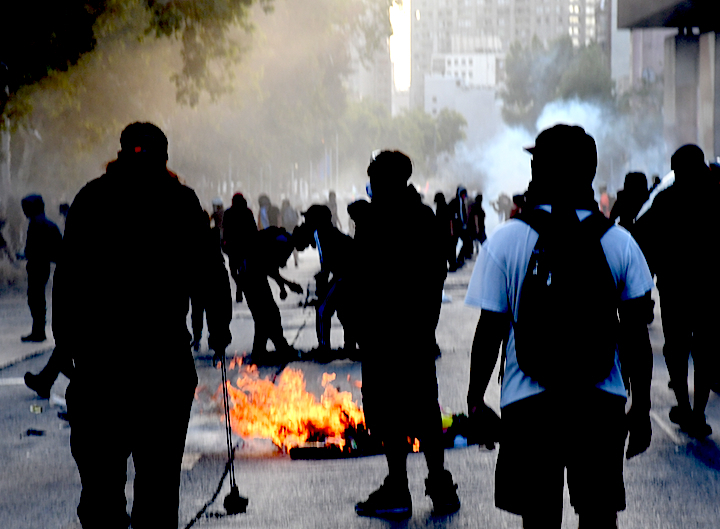 Protesters start to build fires on the street 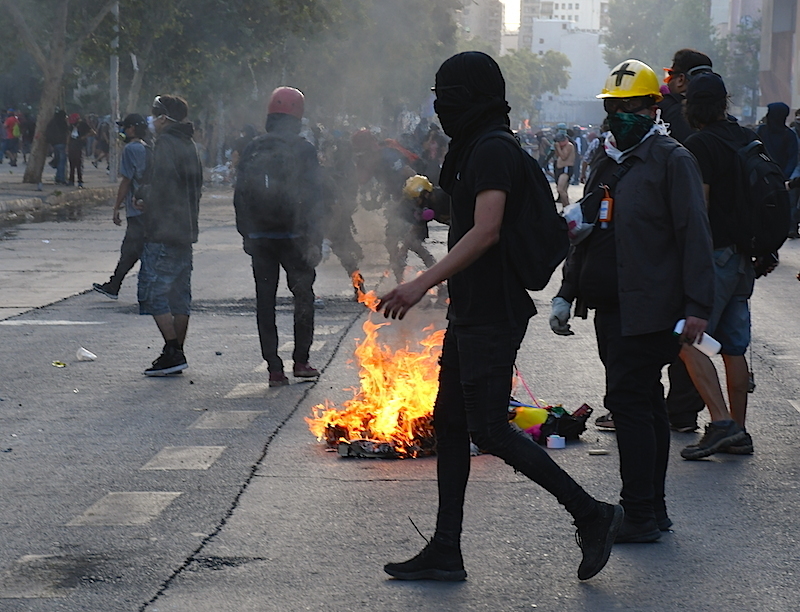 Protesters with fire on the street 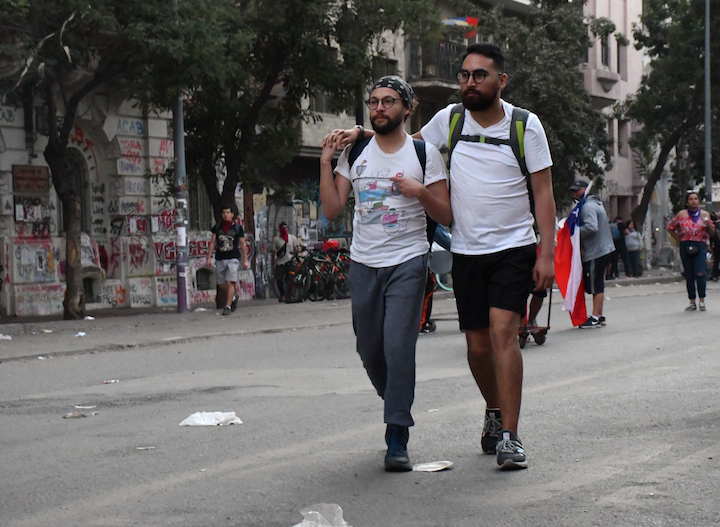 The Chilean protests have taken place over the span of 50 days. People have been inspired to
openly express their feelings which the state does not approve of.

The negotiations at COP25 in Madrid ignore human rights and eviscerate climate science in debates over “natural climate solutions” designed to pave the way for business as usual by using the entirety of the natural world as one giant pool of carbon and biodiversity offsets. In Chile, however, the uprising is showing a real way forward through the creation of a popular “constitutional assembly” that will include everyone. 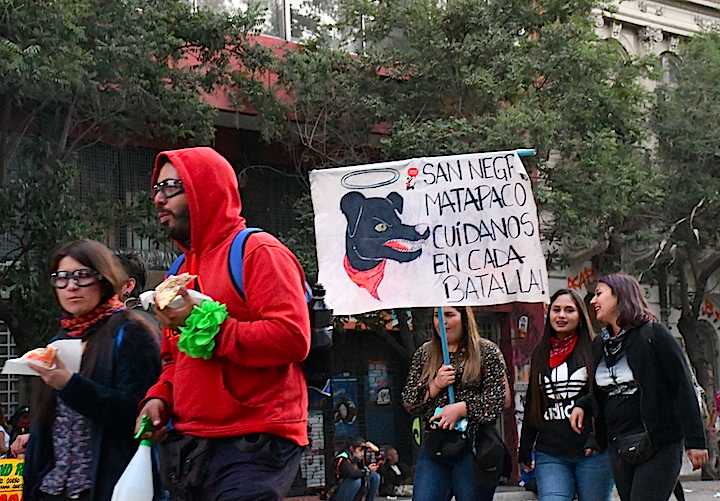 So the #climatemarch in Santiago was about more than “climate action.” It was about diving deep into the economic and political roots of the crisis, challenging and denouncing the false solutions, and joining with a burgeoning popular movement devoted to making real change. This movement is creating a people’s way forward that encompasses the rights of Indigenous Peoples, an end to free-market ravaging of the environment and an just economic and political pathway forward. 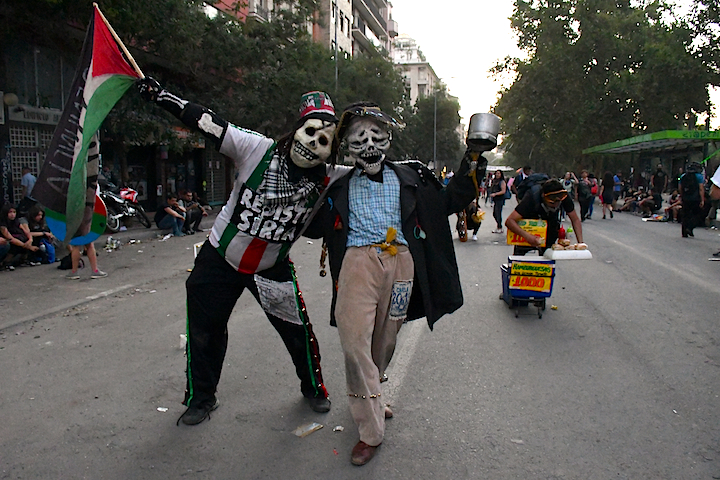 People in the mobilizations express themselves in different ways 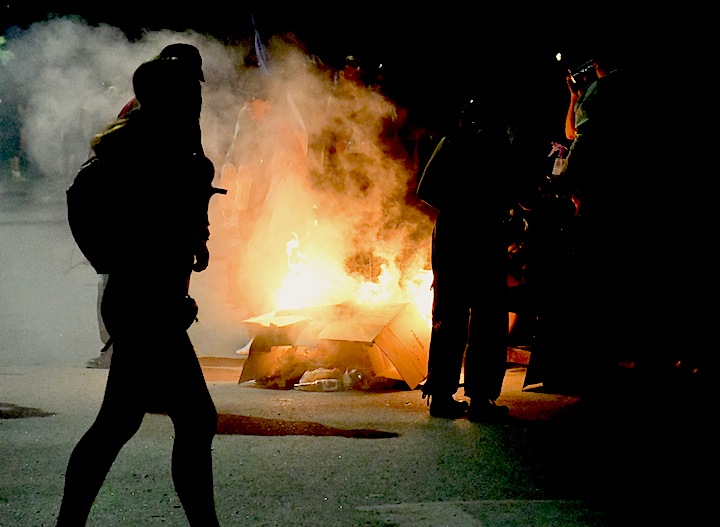 More fires start as the day runs into night 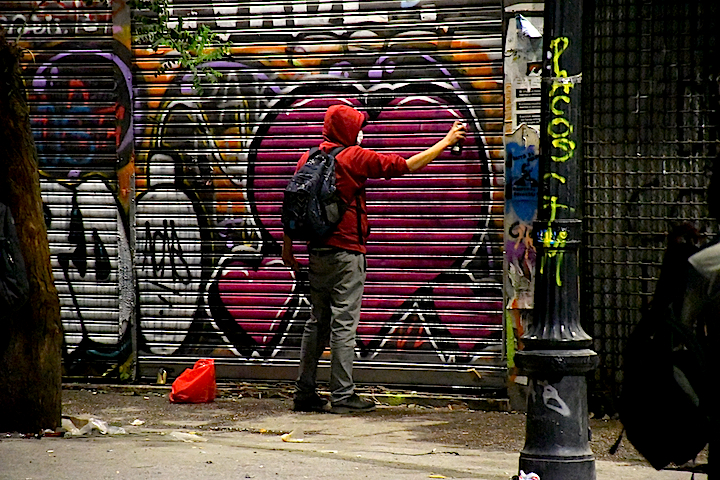 A graffiti artist in action.  Love is a major inspiration of the mobilization. 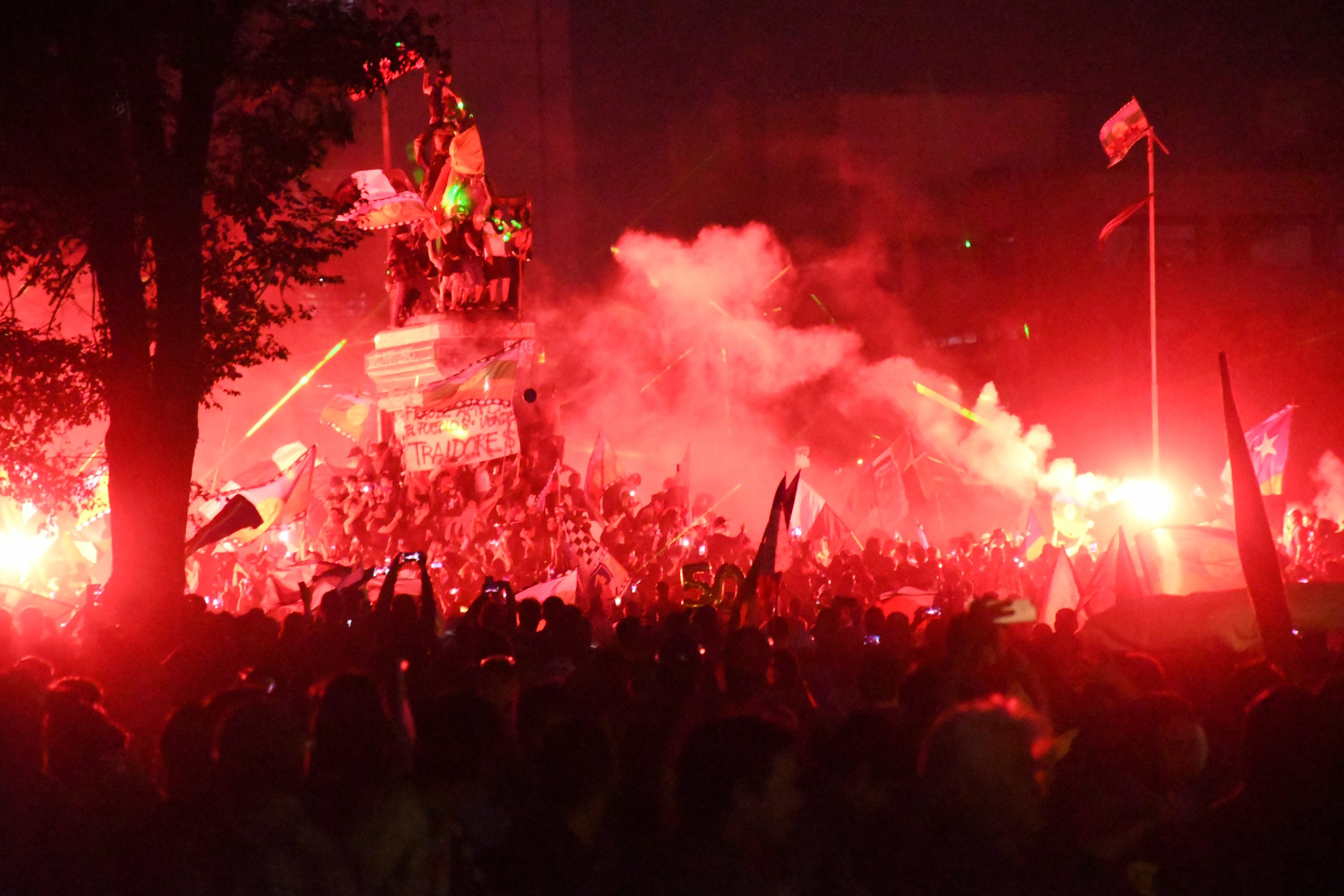 Governments and corporations can control the people most of the time – but not all of the time!

These are exciting times in Chile and revolutionary fervor here is infectious. Maybe this new Chilean model can be an inspiration and an example in the race to avert climate catastrophe.

One Response to “PHOTO ESSAY: Chileans Take to the Streets on Day 50 of the People’s Uprising”