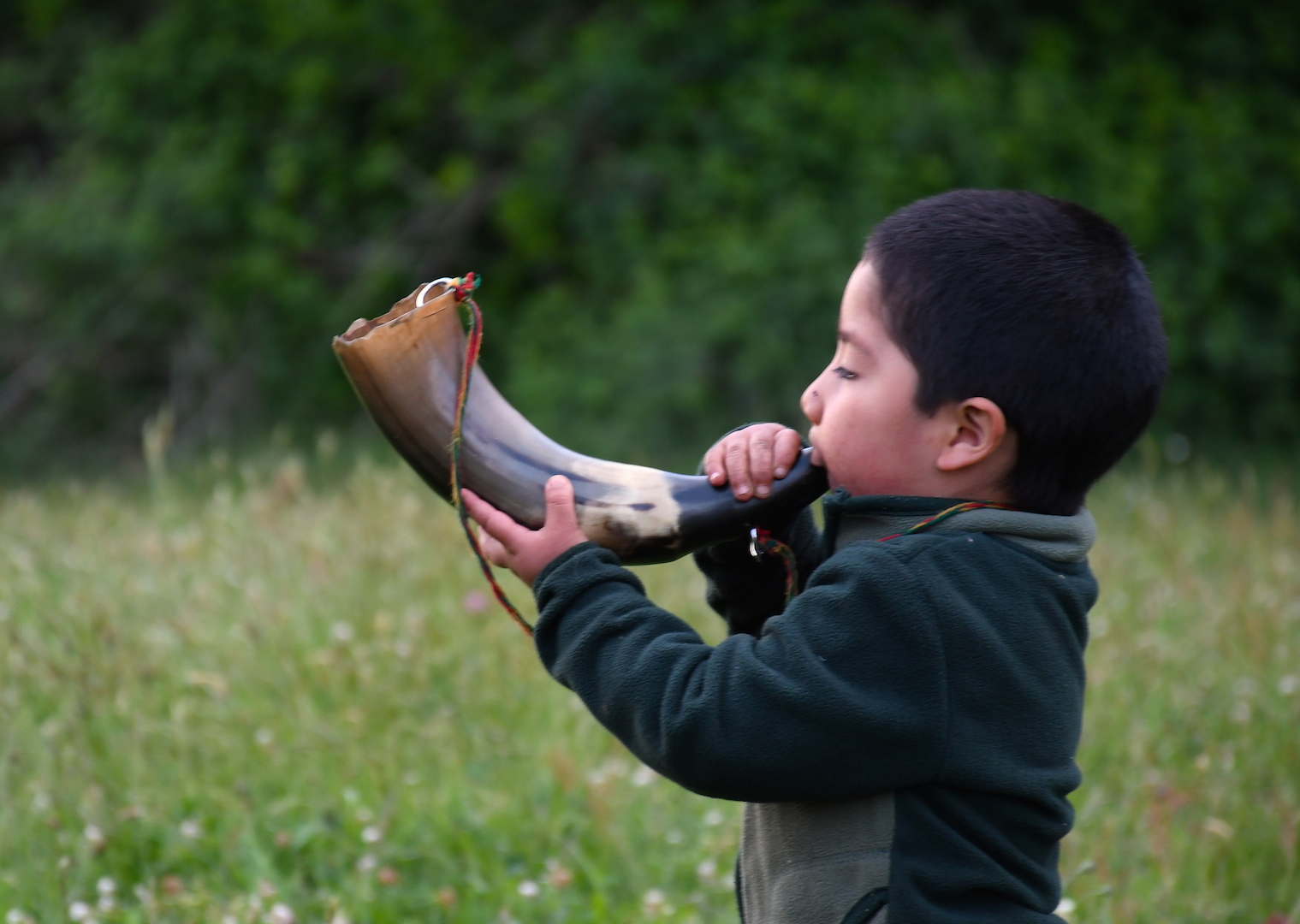 This young Mapuche is from the community of Quilape Lopez re-occupying ancestral lands that were stolen. Elders say the young are the future of the Mapuche as is the land. photo: Langelle/GJEP

I Can Still Spit

Field Notes – I landed in Santiago, Chile on 22 November from Buffalo, NY via Toronto with Anne Petermann. Anne is the Executive Director of Global Justice Ecology Project and we are married life partners. We crashed for a couple of hours in Hotel Forestal. That afternoon we met up with Gary Hughes from Biofuelwatch and we hit the ground running to start covering, exploring and understanding the peoples’ rebellion in Chile.

We are the team for CHILE CLIMATE NEWS. My photos start here in Santiago and the diaries cover that day of arrival and the street protest we joined, and are followed by our subsequent journey to Temuco, Curacautin, and the Mapuche land occupations at Liempi Colipi and Quilape Lopez, and eventually back to Santiago. In Temuco we met the other partner of the team, Alejandra Parra from RADA, the Environmental Rights Action Network.  We met Alejandra back in 2004 when we first came to Chile to work with the Mapuche group KONAPEWMAN on the problem of genetically engineered trees and industrial tree plantations.

On this journey we covered marches against a toxic new waste-to-energy incinerator planned for Mapuche territory (being promoted as “green renewable energy,” a powerful women’s march in Temuco, land occupations in remote Mapuche territory where we spent good times with the kind and generous communities of Liempi Colipi and Quilape Lopez and the hard times when members of the Liempi Colipi occupation called to tell us the Carabineros de Chile (national police) had raided their community, using tear gas and shooting people with rubber coated metal pellets. We dropped everything and went to the community.

I Can Still Spit continued…

Okay WTF does ‘I can still spit’ mean? Gary Hughes from our team told me early on in the trip that if you are afraid, as long as you can still spit, it’s ok. If you can’t spit, you better get out of whatever situation you’re in very quickly and maybe you shouldn’t even be where you are. I have questioned a few times if I should have been in particular situations. When the Carabineros came charging at us from the middle of nowhere, where people have been shot and then in other situations when I was choking from teargas, I did briefly question why I was there. But I could still spit. I had to be there because that is what I do. It is what I have done for 50 years now.

The reason I could still spit was because of the people. With the Mapuche, who welcomed us, not only into their community that also fed us, but onto the front lines when no one knew what the outcome would be if the Carabineros attacked the occupation. I could still spit because I knew and deeply felt I was part of something bigger than myself.  I could spit because, although the adrenaline was pumping, although I fell and injured my leg climbing over a blockade, I was with strong, kind and generous people.

And then I knew I could continue spitting (at the elites and their police) back in Santiago the evening of 6 December when the Plaza de la Dignidad lit up with red flares, fires and lasers. The exuberance of the scene. The hope.

I’m putting these photos and diary together after International Human Rights Day on 10 December where I covered the activities in Santiago, and where the authorities did anything but honor human rights, including critically injuring a 15 year old girl with a teargas canister to her head. Visuals: How Chile Dealt with International Human Rights Day.

We originally planned to come to Chile when we heard the UN Framework Convention on Climate Change (UNFCCC) COP25 would be here. For Anne and I, after covering so many COPs, from our first COP in Buenos Aires in 2004, then to Montreal, Nairobi to Bali, Poznan, Copenhagen, Mexico, and our final COP in Durban in 2011, coming back to Chile was to stand up against the final nail being driven into life itself with the capitalist’s scheme for the total commodification of Earth and all its inhabitants. A scheme greenwashed with the name “natural climate solutions” – solutions for corporations to use nature to maintain business as usual while pretending to address climate change through biodiversity and carbon offsets. The same old same old, but with new shiny packaging. Plus, we knew Chileans protesters knew how to throw a party. This was before the uprising began. Little did we dream we would walk into a revolution-in-process.

I was accredited as media from the UN climate COP25 originally scheduled for Santiago, Chile. Due to the popular rebellion in Chile and the government’s desperate desire to hide its human rights crimes–like rape, torture and 350+ eyes lost to carabinero shotguns, COP25 was moved to Madrid, Spain. I also received UN accreditation there. I chose to come to Chile and photograph the people in resistance instead of going to Madrid.

I will still spit because I must. 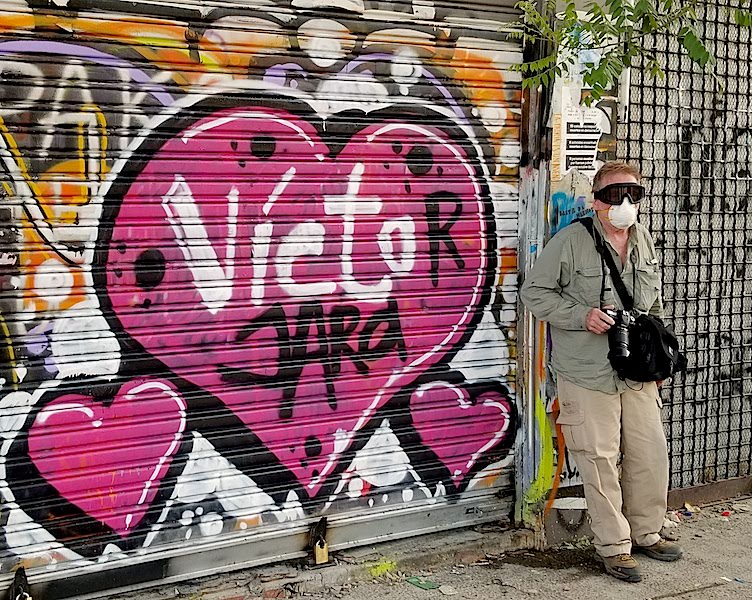 Photojournalist Orin Langelle takes a break by graffiti celebrating Victor Jara in Santiago, Chile. Langelle has been in Chile photographing the frontlines of the peoples rebellion, and has documented movements for struggle around the world since 1972. The musician Jara, a Chilean hero, was murdered by the regime of dictator Augusto Pinochet, under whose regime neoliberalism was ushered in. photo: Petermann/GJEP

One Response to “Video: CHILE PHOTO DIARIES – from the frontlines”