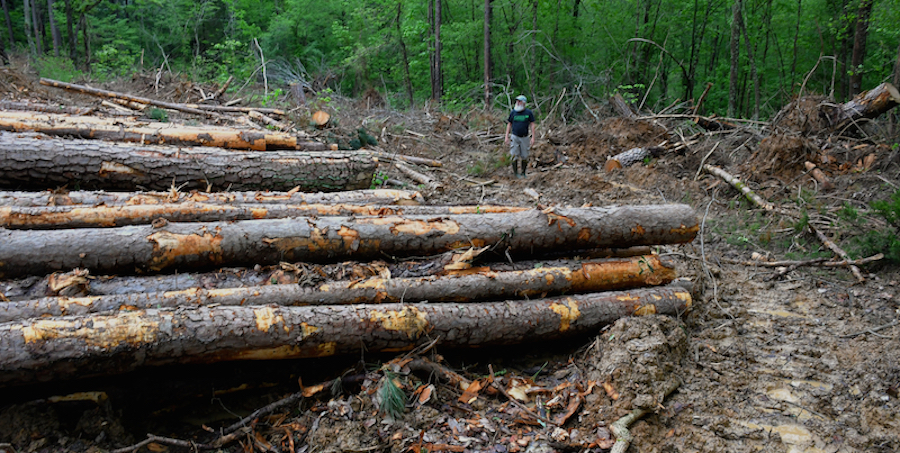 Clearcut in the Shawnee National Forest during songbird mating season, May, 2019 Photo: Langelle

Carbondale, IL- In an editorial five days before a major convergence of activists in the Shawnee National Forest, the region’s daily paper of record questions both the credibility of the United States Forest Service (USFS) and the validity of its management prescriptions.

The convergence, which is bringing activists from North America to the Shawnee National Forest in Southern Illinois, will focus both on forest health and the current climate crises. Almost thirty years after environmentalists won an unprecedented victory that stopped logging in southern Illinois for nearly two decades, activists and grassroots organizations from across the continent are converging there to develop cutting edge strategies targeted at the increasingly urgent climate and deforestation crises.

However, the USFS recently proposed a project that will reopen the national forest to commercial logging of a mature oak/hickory forest under the same rationale of promoting oak regeneration that they used thirty years ago.

“As we can see from results of past logging that it did not work then, and I can assure you it won’t work now, if they are allowed to exploit it again,” said John Wallace a member of the Convergence Coordinating Committee who was active in the fight to stop commercial logging in the Shawnee in the 1990s.

The editorial board of The Southern Illinoisan echoed that sentiment in its 10/6/2019 editorial by stating that, “the environmental community claims the Forest Service can’t be trusted. There is some validity to that claim. It’s not that the Forest Service’s science is faulty – we’re not in a position to make that statement.  It’s that areas previously ‘restored’ don’t exactly fit the description of a healthy oak-hickory forest.”

The paper went on to question the USFS’s transparency and credibility. It stated, “frankly the Forest Service didn’t help its credibility earlier this summer when a Southern Illinois reporter was removed from an objection resolution meeting.  Babete Anderson, the U.S. Forest Service’s national press officer, later stated the reporter should have been allowed to attend, but the initial action casts doubt on the agency’s transparency.”