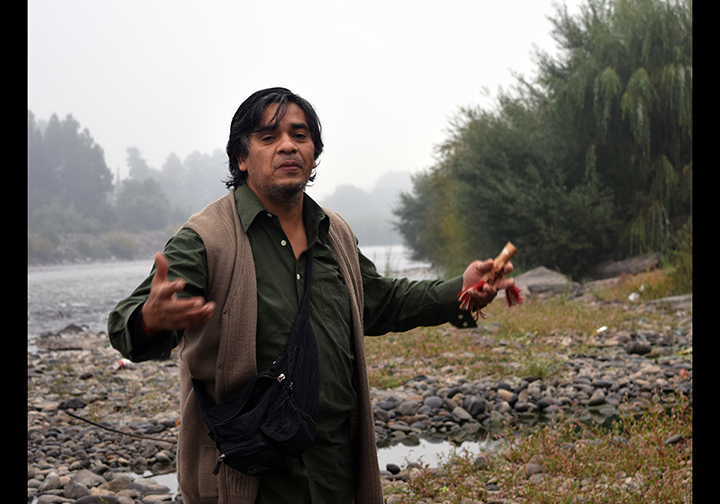 Tree Plantations are Not Forests (2017)
Temuco, Mapuche Territory (Chile): A Mapuche man stands by the Rio Cautín in Mapuche territory following a water ceremony. He denounced the destruction caused by corporate-owned industrial timber plantations that deplete water needed for Mapuche communities’ survival. This two-year old photograph was taken during a delegation from the International Campaign to STOP Genetically Engineered Trees. The in-country logistics were coordinated by the Latin American Observatory of Environmental Conflicts (OLCA).      photo: Langelle/GJEP

COORDINATOR ARAUCO-MALLECO SYMPATHIZES WITH THE STRUGGLE OF THE CHILEAN PEOPLE

To our Mapuche nation people, in solidarity with the Chilean people in struggle, as Coordinator Arauco Malleco, we declare the following:

– Kiñe: That, in the face of the outbreak of the Chilean people against the established order, the oppressive bourgeois institutions and their neoliberal practices, in the first place, we stand in solidarity with the just social demands that, although we understand, have no political leadership of the revolutionary left, they do represent the just and worthy cry of a people oppressed by neoliberal policies that already made crisis by the greed and ambition of the powerful, who do not hesitate to impose their neoliberal, extractive and predatory policies to blood and fire, thus destroying the territories and the rights of people in general.

– Epu: That, within the framework of these struggles impregnated with rebellion, rage and dignity, we vindicate the legitimate right to rebellion by the oppressed Chilean people, since neoliberal governance imposes economic policies only for the benefit of large economic groups and that, at the time of the mobilizations, they do not take in responding with fierce repression against the resistance, even taking the military to the street, who in their history only load genocide to the Mapuche people and massacres the working class and the organized popular sectors, and those without shame, still show their hands full of blood from the Pinochet dictatorship, always with the aim of protecting the oppressive oligarchy of both Chileans and Mapuche.

– Küla: In this same context, and taking into consideration the struggle of our Mapuche people, we call for continuity with greater force to the territorial dispute and resistance against bourgeois power, as we have been doing for more than two decades. Work and fight without truce and without fear until the total eviction of foresters, hydroelectric plants and all other capitalist investments protected in this colonial regime, whose objective is only achieved through the expressions of resistance and consequent organizations of our Mapuche nation people united in a political and revolutionary proposal for the Mapuche national liberation, based on our strategic lines for national reconstruction through territorial resistance and control.

– Meli: Undoubtedly, this process of Mapuche national liberation will be better envisioned when the oppressed of the Chilean people begin to raise a true leftist project of roots and popular representation, of the workers and revolutionaries, that does not fall into the forms already Worn out of doing politics, with pseudo petty bourgeois leaders, traitors and lackeys represented by the Broad Front and the New Majority.

– Kechu: Finally, we call our Mapuche nation people to continue the reconstruction, to continue the process, to strengthen and increase resistance by creating new ORTs and combat groups. To continue with territorial control and the legitimate claims and defense of our Wallmapu.

Our best greetings against the discontent of the oppressed will be our chem, resistance actions against the real enemies, the capitalists, the powerful!

The Mapuche struggle is for territory and autonomy for national reconstruction, laying the foundations for true Mapuche national liberation !!!

Mapuche national liberation will only be achieved with the liberation of the Chilean people !!!

EL PORTEÑO is the magazine of the left in Valparaíso, for reflection and the struggle for the socialist revolution. It is a space for debate and confrontation of the diverse conceptions and revolutionary currents, under the premise of bringing them closer to the living movement of the exploited.
Because we seek a dialogue with larger sectors, we are also a space for culture, art, music, philosophy and all those issues that are part of the workers’ lives.

We are Buenos Aires and a door to the future.