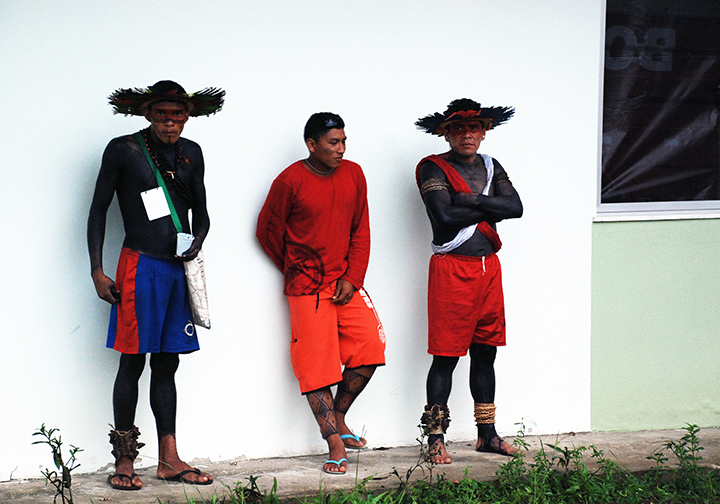 Belém, Brazil: Indigenous men from Amazonia in Belém, the capital of the state of Pará and the northeastern gateway to the Amazon. Under Brazil’s right-wing fascist president, Jair Bolsonaro, the Amazon jungle is suffering from land grabs, resource exploitation never before seen, destroying biodiversity and endangering the lives and livelihoods of the Indigenous peoples that depend on the forest. More than 74,000 fires have burned this year alone in the rainforest. And this is devastaing the lungs of the Earth when we are faced with catastrophic climate disruption. photo: Orin Langelle / photolangelle.org

Photographer Orin Langelle announced that his work will be shown at the upcoming 2019 North American Forest & Climate Movement Convergence, October 11-14 in the Shawnee National Forest, Southern Illinois (U.S.). The event is a strategy session for activists and others concerned with the imminent threat of catastrophic global climate disruption to devise meaningful action and to join forces against the drivers of environmental exploitation and degradation.

“Let’s face it climate change is here. Extreme weather is happening daily. Its going to get worse as the next decade or so progresses,” said Langelle in a statement on his website about the upcoming showing of Portraits of Struggle and the Drivers of Climate Chaos.

“Doom is not inevitable. Change is possible. The photographs in this exhibit document impacts of and resistance to climate change and false solutions, spanning five continents and more than twenty-five years,” said Langelle.

Langelle recently released a video discussing his nearly 50 years of activism and work as a “concerned photographer” documenting and resisting “environmental destruction and social injustice.” The video ends with an appeal for others to join him in the Shawnee.