The following report from GJEP features photos by Orin Langelle and links to many more of his photos. 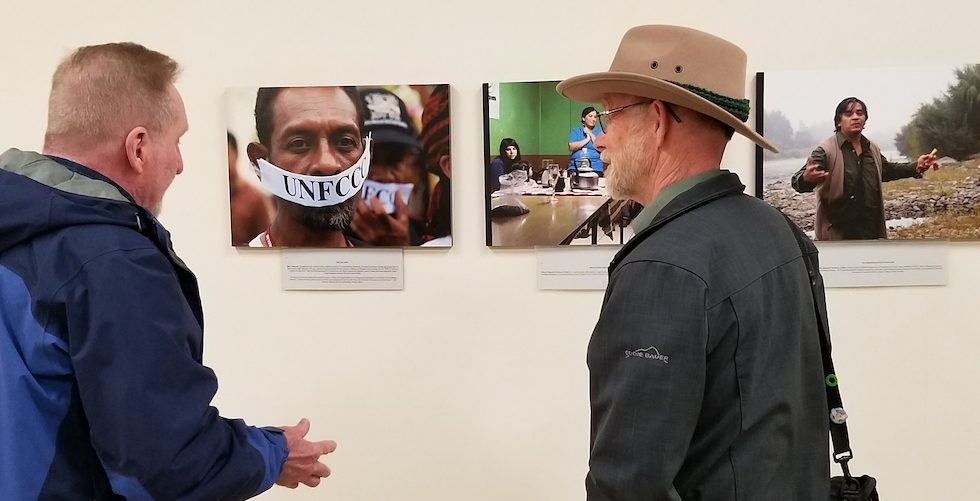 GJEP Communications Director Orin Langelle discusses his Portraits of Struggle exhibit, while it was on display at Mount Union College in Alliance, Ohio over Earth Week. Photo: Petermann/GJEP

This has been an amazing three months for all of GJEP’s programs, and for the Campaign to STOP Genetically Engineered Trees, the international network coordinated by GJEP that is dedicated to ensuring that communities and forests are protected from the risks of releasing of GE trees into the environment.  We made great strides both nationally and internationally.

GE Trees: Keeping them out of wild forests in the U.S.

U.S. Researchers are seeking unprecedented USDA, EPA and FDA permission to plant GE trees throughout eastern forests with no monitoring or regulation.

There are no long-term assessments of the risks they pose. How they will impact soils, insects, birds, wildlife or even human health is simply not known.

It is a massive and irreversible experiment with the forests. That is why we are working so hard to stop it.

Visit our new GE chestnut action page at stopgetrees.org/chestnut to get involved.

There you will find our White Paper on the risks of GE chestnuts, our petition to the USDA, a media webinar summarizing the issues with these GE trees, a STOP GE Trees Campaign interview on NPR’s On Point Radio, and articles written by the report’s co-authors published in Independent Science News, The Ecologist, Earth Island Journal and Counterpunch.

Sign Our Petition to Keep GE Trees OUT of the Forests! 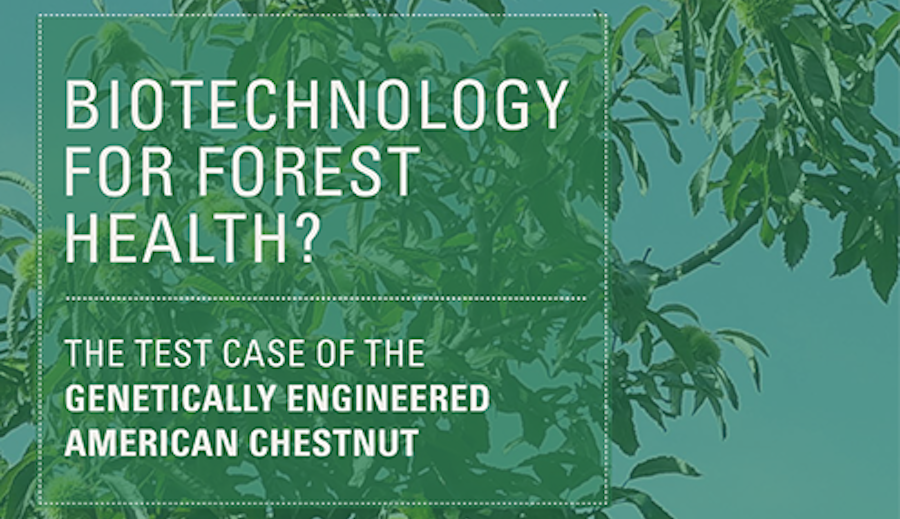 The Test Case of the Genetically Engineered American Chestnut 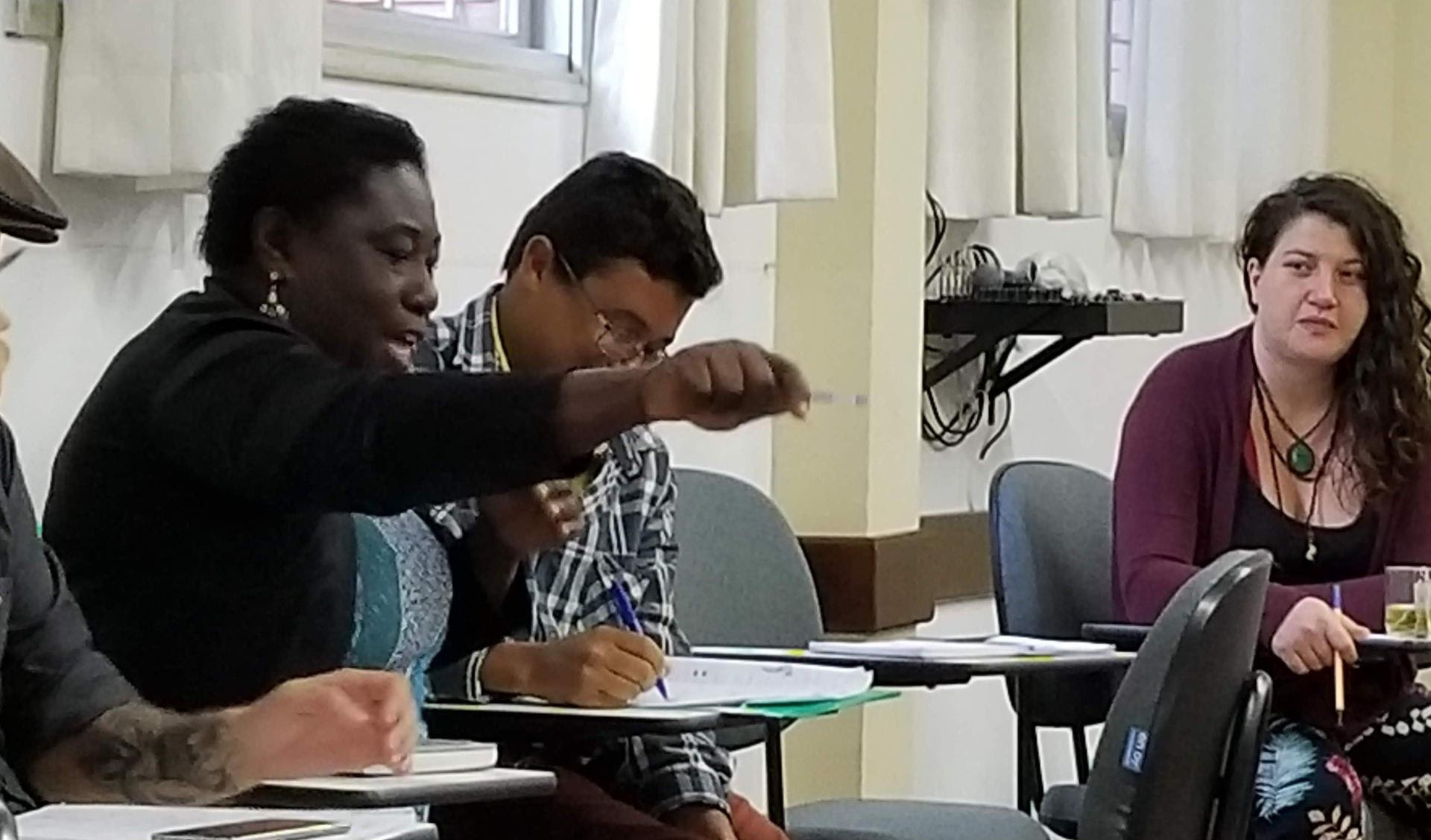 Quilombola woman describes the resistance of her village against the timber industry. Photo: Petermann

In Porto Alegre Brazil, over April 7-12, GJEP Executive Director Anne Petermann attended a national meeting of communities and groups strategizing to stop the spread of industrial timber plantations and future GE tree plantations. The meeting was co-convened by GJEP, World Rainforest Movement and Friends of the Earth Brazil.

During the meeting, strategies and plans were developed for greater collaboration, including a joint media work to link the efforts to legalize GE trees in both the US and Brazil– crucial since many of the same GE tree companies and researchers work in both countries.

We kicked off our US-Brazil GE trees media effort when we attended and monitored the IUFRO 2019 Tree Biotechnology Conference in Raleigh, NC, and distributed press releases in English, Spanish and Portuguese. 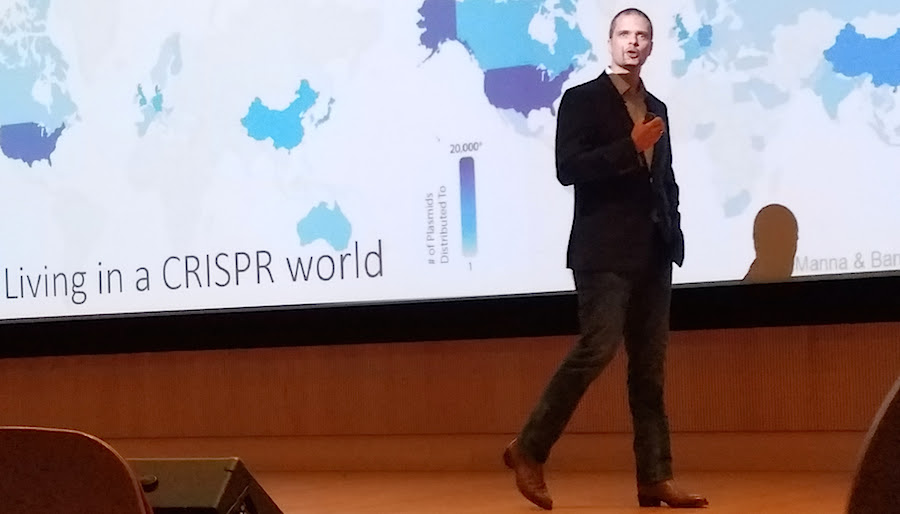 Rudolphe Barrangou keynoted the 2019 IUFRO Tree Biotechnology Conference with a hard-sell presentation on how the gene editing technique CRISPR will revolutionize science and the forestry industry with a brand new generation of risky and potentially disastrous GE trees. Photo: Langelle/ GJEP

In addition to monitoring the conference, and reminding participants of the decades of militant opposition to GE trees all over the world, we met with local and regional groups and delivered a report back from the proceedings that we developed into a mini-video in 3 languages.

Ultimately, the Tree Biotechnology Conference ended in confusion. Their obsession with public opposition was evident both by the constant police presence at the event, and by a lengthy session devoted to the topic.  The underlying anxiety was palpable and left a pall over the event.

At the end, the conference descended into disarray, without confirmation of when or where their next event would be, who would take the top three leadership roles in it, or whether they should continue to use the term “biotechnology” due to its controversial nature.

We call that a victory! 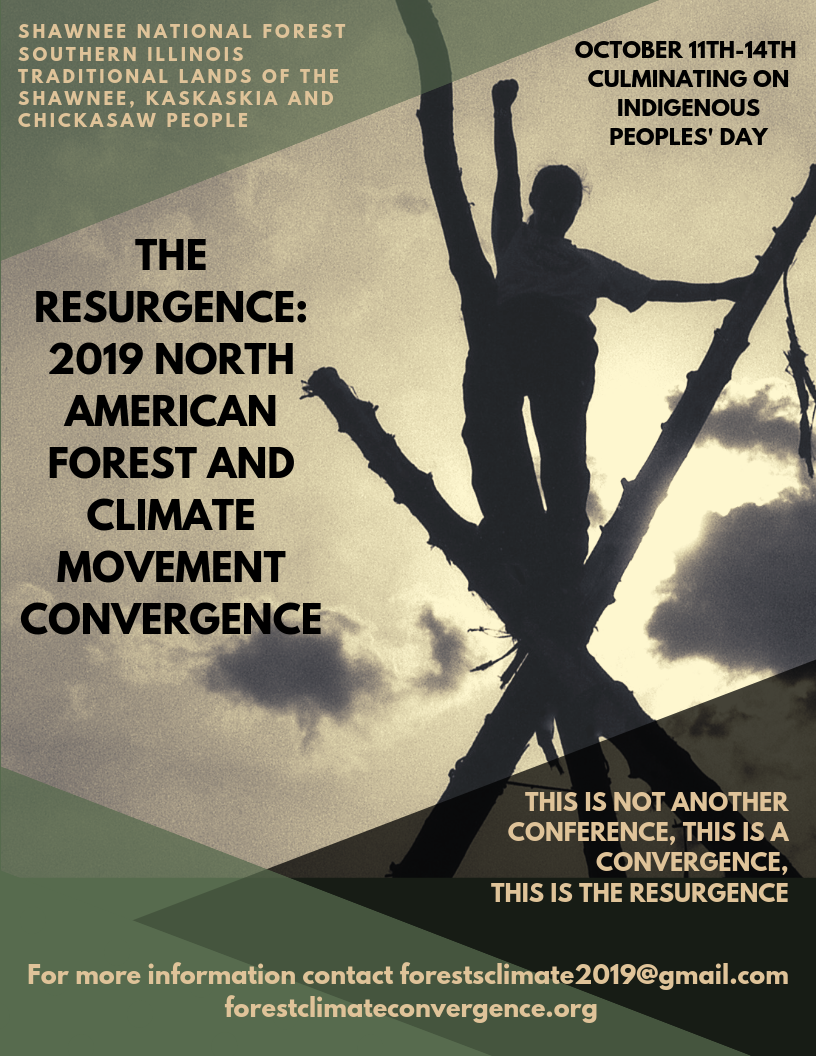 GJEP is co-convening this important event with Indigenous Environmental Network and Shawnee Forest Defense! as well as an organizing committee composed of groups from across the US and Canada.

Listen to our 24 May radio interview about the convergence with our Board member Karen Pickett, which commemorated Judi Bari Day, on KPFA Radio in Berkeley! 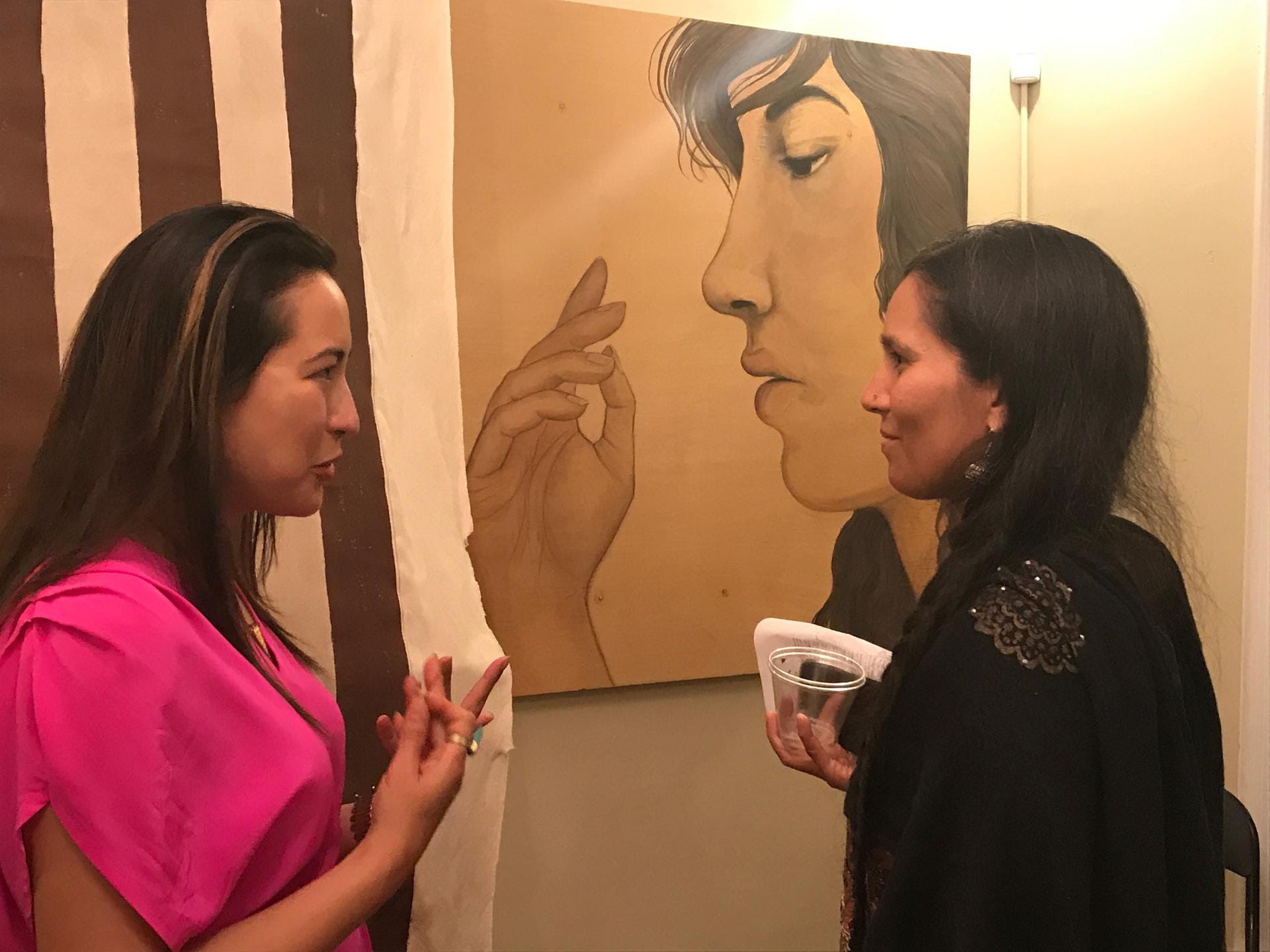 GJEP’s ¡Buen Vivir! Gallery featured the Buffalo, NY premiere of the #notwhite collective’s exhibit In Between the Middle. This exhibit explored the politics of race in the U.S. and included art, photography and spoken word. The all-woman artist collective received rave reviews and we look forward to working with them again!

Langelle Photography, is the global justice photography program directed by GJEP co-founder and documentary photographer Orin Langelle. The PhotoLangelle.org websitefeatures photo essays, photos of the month and other posts linking art and activism. 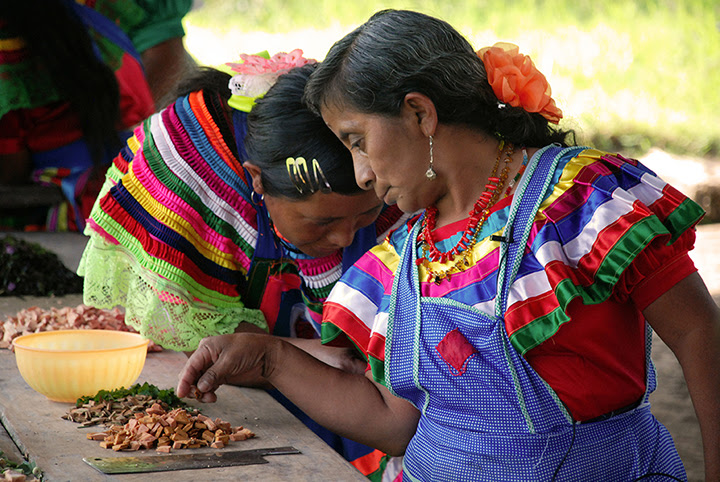 From Portraits of Struggle: Women healers prepare traditional medicines in Amador Hernandez, an Indigenous village in the Lacandon Jungle of Chiapas, Mexico that was threatened with forced relocation for a forest carbon offset deal between Chiapas and California.  Photolangelle.org

Orin has been taking his acclaimed Portraits of Struggle exhibit on the road, and in April it was featured at Mt. Union College in Ohio, where Langelle was a visiting artist and guest lecturer over Earth Week.

Logging vs. Songbirds: Photojournalism in Action 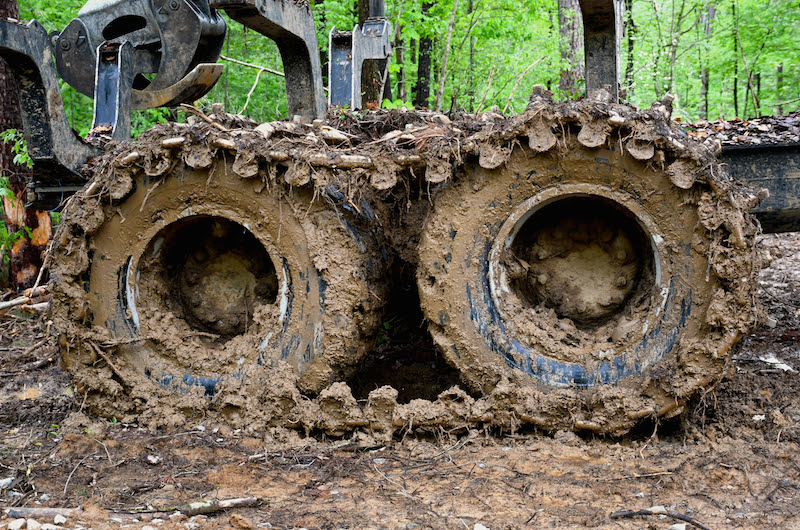 Mud caked tires and the tracks that covered them on a forwarder used to haul out lumber at the industrial Lee Mine logging project in the Shawnee National Forest (SNF). (April 2019) PhotoLangelle.org

While in Southern Illinois in April, Langelle was alerted to a logging operation in the Shawnee National Forest in the middle of songbird nesting season. He took this photo above which was widely publicized and caused outrage at the actions of the Forest Service.

You can find all the shows here: https://globaljusticeecology.org/category/earth-radio/