One month and thirty years ago, activist John Wallace and I walked together through a clearcut in southern Illinois’ Shawnee National Forest. I suppose it was destined to happen a few more times and the last time just happened on May 2, 2019. It was not a pretty sight. – Orin Langelle 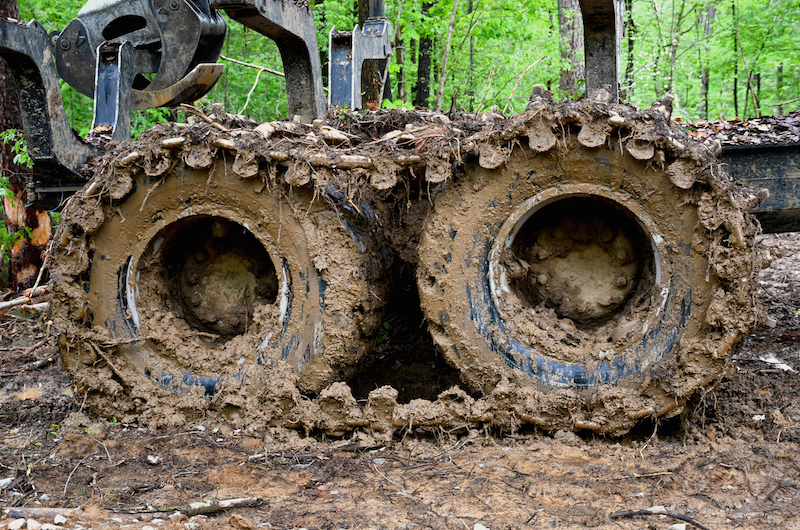 Mud caked tires and the tracks that covered them on a forwarder used to haul out lumber at the industrial Lee Mine logging project in the Shawnee National Forest (SNF). (2019)   PhotoLangelle.org

Hardin County, Illinois – On an incredibly rainy May 2, heavily loaded log trucks passing by alerted activist John Wallace and photojournalist, Orin Langelle, to investigate a nearby Shawnee National Forest logging site, known as the Lee Mine Project in Hardin County. The clearcut logging site included a recently pushed-in road, a log landing, and punched-in roads or trails sprawling in different directions. A bulldozer, a feller-buncher and a mud-caked forwarder (for hauling out logs) were setting idle on site, after the end of the work day. Muddy ruts and stumps dominated the scarred landscape. 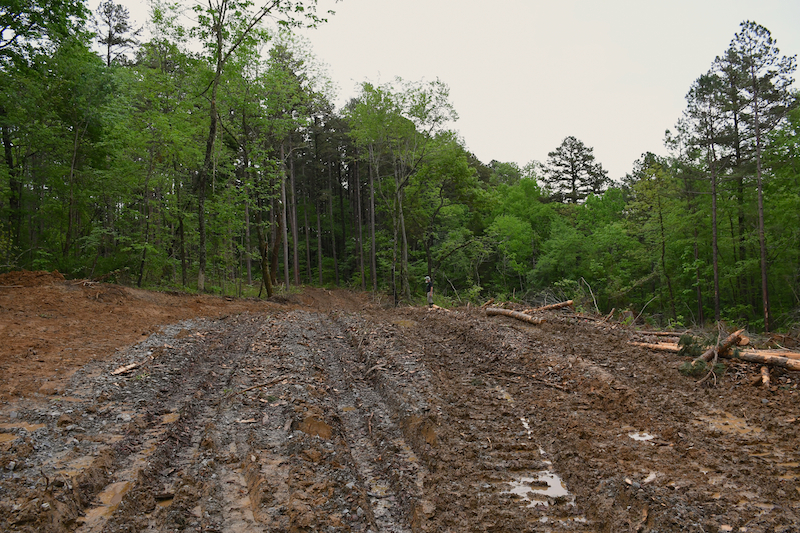 Tree cutting, bulldozing and road building were well underway on April 20, when a resident neighbor, Patti Walker first noticed the atrocity, in direct contradiction of the agency’s own standards detailed in a 2007 Environmental Assessment. As if the simple disregard for forest inhabitants weren’t enough, the project was in full swing on May 2, a day that locally received more than 2″ of rainfall.  Logging in mud destroys forest soils. 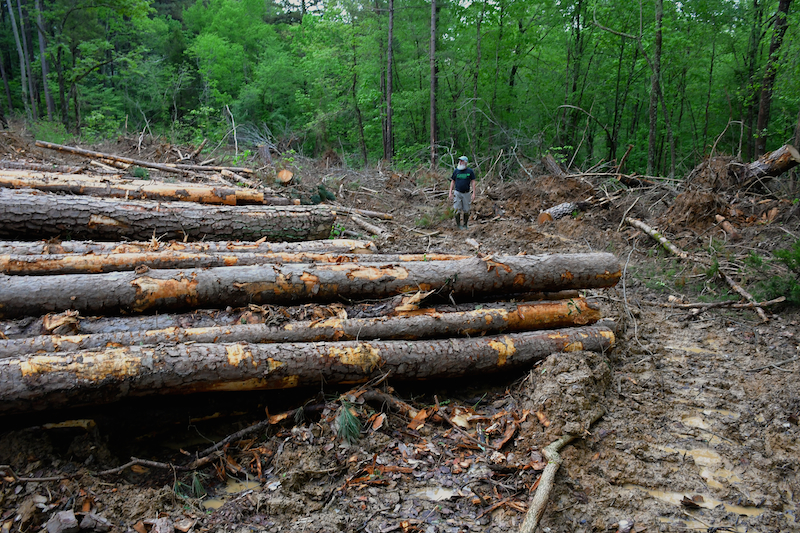 The Lee Mine Project is an industrial logging scheme that USDA Forest Service (FS) staff has dishonestly characterized as “Hardwood Restoration.” The smaller, hardwood trees of the forest understory are being destroyed along with the larger, harvested pine trees. In the midst of the forest songbird nesting season, agency officials have turned a blind eye to their own previously stated mitigating measures of protecting nesting birds from damaging project activities in the locale. 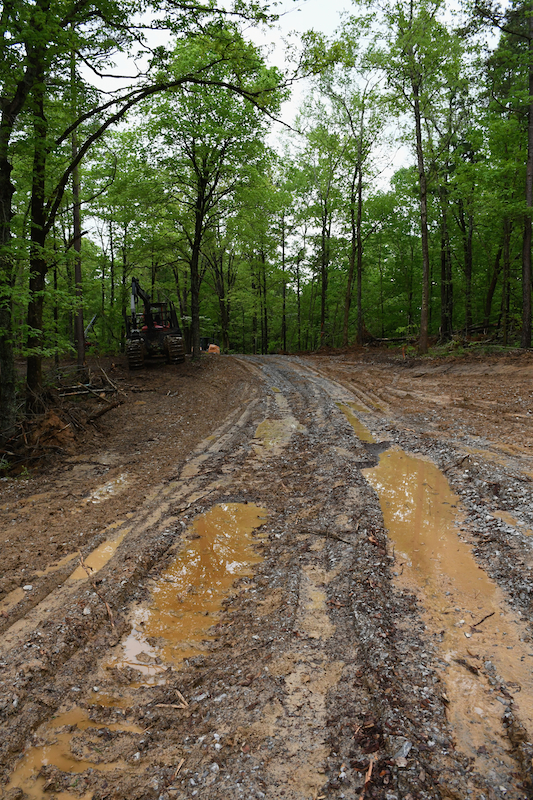 On a site located just across the road from the current Lee Mine Project area the FS took the following stated measures to protect nesting birds. “[T]o minimize effects on migratory birds and other reproducing animals, no prescribed fire, site-preparation or tree-cutting would be conducted during the most active part of the nesting season (April 15-July 15).” (Responses to Comments, Revised EA, Harris Branch Restoration of Hardwoods in a Pine Stand, #8, pg. 6) 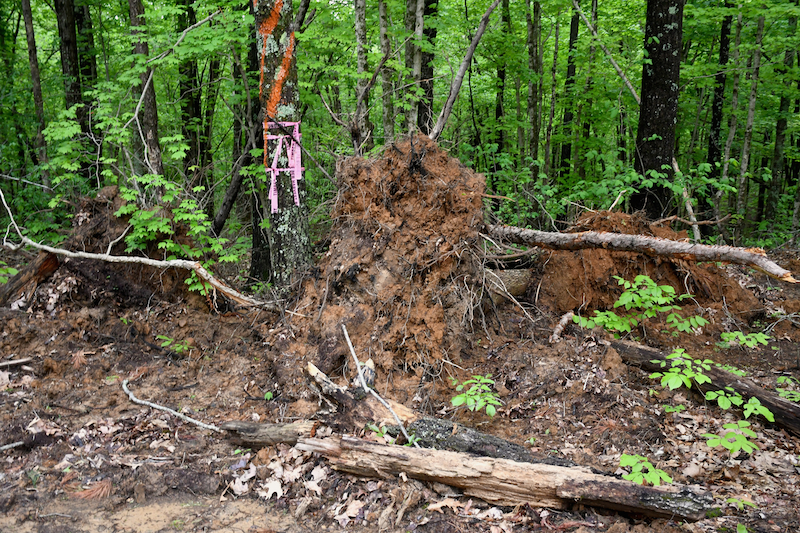 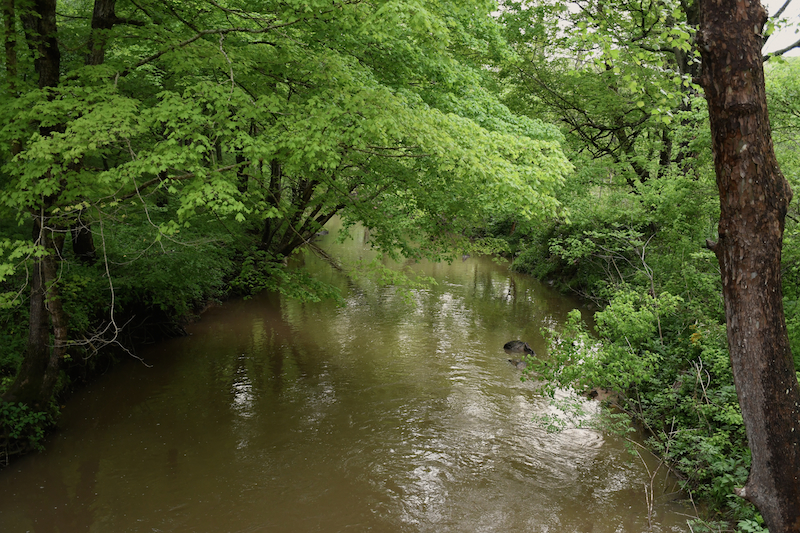 Big Creek, a candidate stream for wild and scenic riverway designation, brown from rain runoff and erosion from the Lee Mine Project is also designated as a Zoological Area in the SNF. (2019)   PhotoLangelle.org

Adding insult to injury, the hilly and recently muddied landscape drains directly into Big Creek, a candidate stream for Wild and Scenic Riverway designation. Because of its biological diversity, the stream is also designated as a Zoological Area on the Shawnee National Forest.

“Big Creek is a beautiful, clear, rocky, spring-fed stream that flows through limestone formations of Shawnee Hills…”, “the clear cool water provides a stream environment suitable for fauna that is intolerant of sluggish, silty, warm waters,” are typical descriptors of the stream as detailed in Biologically Significant Illinois Streams, An Evaluation of the Streams of Illinois, (INHS, L.Page, K.Cummings, C.Mayer, S.Post, 1991). It is known to contain two state endangered crayfish, Ordonectes kentuckiensis and Orconectes placidus. Big Creek is also believed to contain a state threatened fish, least brook lamprey, Lampetra aepyptera. (citation above). The Illinois Water Quality Report (Illinois Environmental Protection Agency, 1990) rated the stream as “Full Support,” and the Biological Stream Characterization (Hite and Bertrand, 1989), rated this stretch of Big Creek as an “A” Stream, a Unique Aquatic Resource. It was also rated as one of the “Outstanding” streams in the system (INHS, L.Page, K.Cummings, C.Mayer, S.Post, 1991). 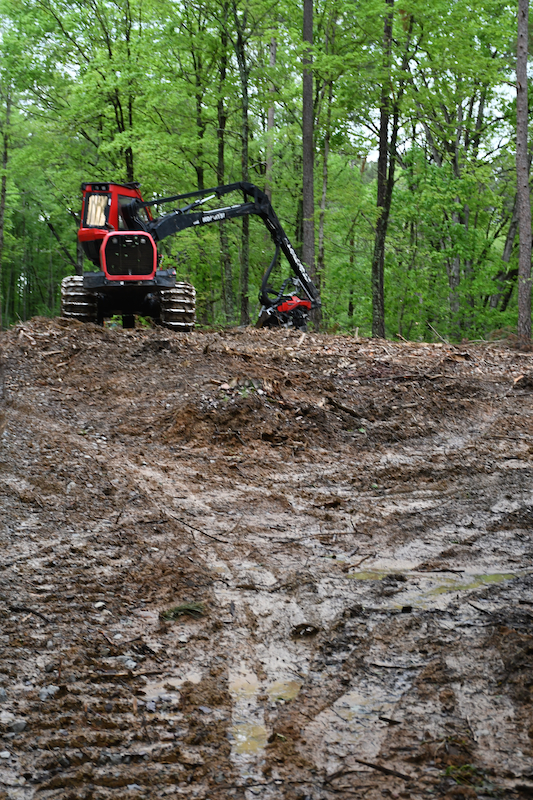 Above the mud and ruts is an idle feller buncher, a type of harvester used in logging. It is a motorized vehicle run by a single person with an attachment that can cut and gather several trees before stacking them on the ground. A feller buncher can cut 200 trees per hour, eliminating logging jobs. (2019)           PhotoLangelle.org

Following a day of industrial logging operations near its banks, and in the midst of heavy and consistent rains, the typically clear flowing stream was compromised by turbid water, clouded with sediment from the nearby denuded hillsides, trails and bulldozed roadways of the logging site. Other nearby streams that had no drainage from the logging operations were flowing with amazing clarity.

The FS has once again allowed the timber industry to run roughshod over one of its project sites to the detriment of the Shawnee National Forest, the land, the water, the forest inhabitants and the citizens of this country, at the Lee Mine Project logging site. There is frankly nothing about this project that can be considered consistent with the Forest Service stated motto which is, “Caring for the land and serving the people.” 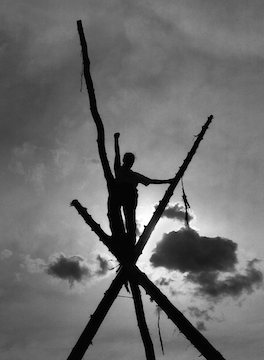 Please join Indigenous Environmental Network, Global Justice Ecology Project and Shawnee Forest Defense! in October for The Resurgence: 2019 Forest & Climate Movement Convergence where we will join together diverse movements to build strategies with action to fundamentally transform the system that is destroying life on Earth.  The event will take place in the Shawnee National Forest.

11 Responses to “Shawnee National Forest Allowed to be Desecrated by U.S. Forest Service”