I preferred the look on his face after the Vermont Supreme Court ruled (5-0!) that this arrest was a violation of my First Amendment rights. Turns out, you’re allowed to call a war criminal a war criminal at a public gathering (John Negroponte). Looks like it might be time to exercise some rights again. 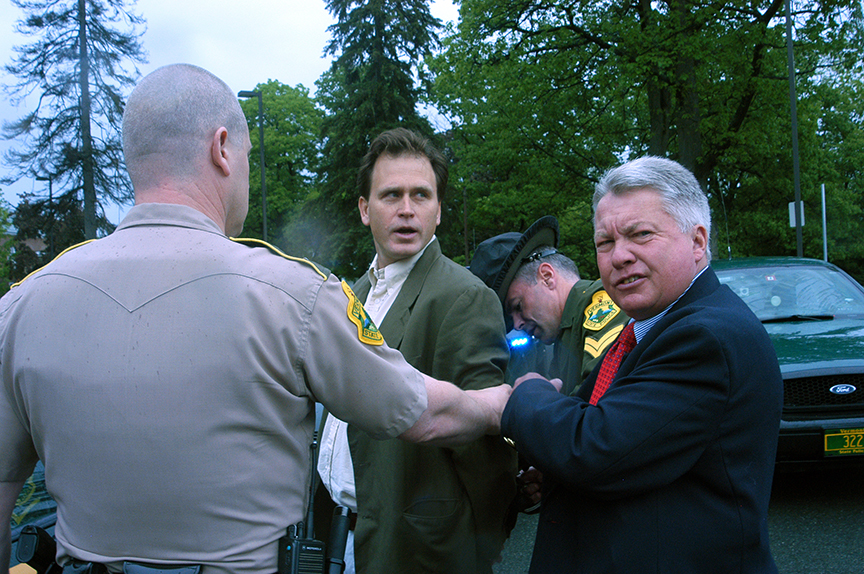 John Negroponte’s Commencement Address to the graduating class of private St. Johnsbury Academy disrupted inside the auditorium where the ceremony was being held

by Anne Petermann and Orin Langelle

St. Johnsbury, VT – 5 June 2006 – Over 75 protesters gathered on the sidewalk outside of the Academy protesting Negroponte’s shadowy record that spans decades including a stint as the U.S. Ambassador to Honduras and Ambassador to Iraq before his present position (2006) as the nation’s number one “intelligence” overseer – National Intelligence Director.

Briefly after Negroponte began his address, Michael Colby, from Worcester, VT stood up saying, “In the name of democracy I object to this man speaking. He has blood on his hands from his work in Central America and Iraq. He shouldn’t be at the podium, he should be in jail. He is a war criminal.” Colby was grabbed by police and security and escorted out of the auditorium to awaiting police cars.

Colby said that he told the arresting officer that, “I come in peace.” Colby said then the officer punched him in the stomach.

Prior to the arrests, while the protesters were gathered on the sidewalk, a statement was read that came from Professor Dennis Brutus of Johanesburg, South Africa (Brutus is also a poet, activist and former political prisoner in South Africa):

“Delighted to hear of protest against that monster Negroponte – he is more than a black bridge – he is a black bridge to murder, assassination and mayhem, from Honduras and beyond. All power to those who protest in the name of social justice and humanity – and shame on those who invited this monster. On behalf of all the victims of oppression everywhere.”

Fliers handed out by protesters made the accusation that while Negroponte was “ambassador to Honduras from 1981-1985, he collaborated with the Honduran military government overseeing one of the most scandalous and shameful periods of U.S. foreign policy overseeing:

–An illegal and unauthorized ‘Contra’ war against the Sandinistas in Nicaragua

–Censorship of the media’s reporting on the war

–The now infamous Iran-Contra Scandal…after the U.S. congress voted to withdraw support for the (war) due to widespread human rights abuses by the Contras…”