Plantations are not Forests 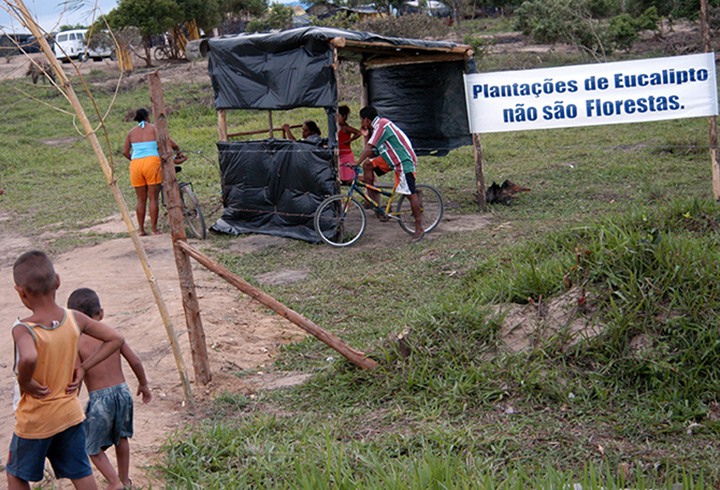 “Plantations of Eucalyptus are not Forests” proclaims the sign at the entrance of the MST (Movimento dos Trabalhadores Rurais Sem Terra – Landless Workers Movement) encampment. The MST here took over portion of a plantation owned by timber company Aracruz Cellulose, removed the non-native trees and erected their camp, complete with a well, community space and an elaborate system on non-hierarchical decision making. The camp was named Galdino dos Santos, for an indigenous chief who was murdered two years earlier in a racist attack. (Brazil 2005) Photo by Orin Langelle

This month’s topic is Destructive Agriculture and Indigenous/Campesino Rights.

Petermann just returned from meetings in Porto Alegre, Brazil with anti-plantation Indigenous and community groups from Brazil, Argentina and Chile along with the World Rainforest Movement and Friends of the Earth Brazil / Amigos da Terra Brasil. Petermann will speak about impacts of and actions to resist industrial tree plantations including rural indigenous and Quilombola (Afro-Brazilian) efforts to take back their lands from these industrial plantations.

Petermann is also the international coordinator for The Campaign to STOP Genetically Engineered Trees and will talk about how the use of GE trees in these timber plantations would worsen their social and ecological impacts. World Rainforest Movement, based in Uruguay, is the Southern Contact for the Campaign and has materials in English, Spanish and Portuguese on their website at https://wrm.org.uy.

The Latin America Solidarity Committee is a Task Force of the Western New York Peace Center.

The event is free and open to the public. 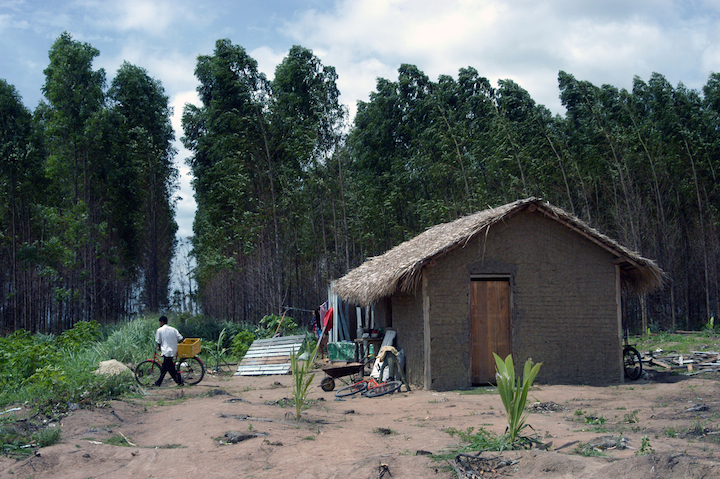 Man walks with his bicycle hear his home, with eucalyptus plantation in the background. Industrial plantations of eucalyptus trees overrun the state of Espirito Santo, Brazil. In 2005, Indigenous Tupinikum and Guarani peoples began the process of reclaiming the 11,000 hectares of land that was stolen from them under Brazil’s military dictatorship and given to timber corporation Aracruz Cellulose for tree plantations. The Tupinikum and Guarani cut down a portion of these eucalyptus plantations and re-established their village. (2005). Photo by Orin Langelle