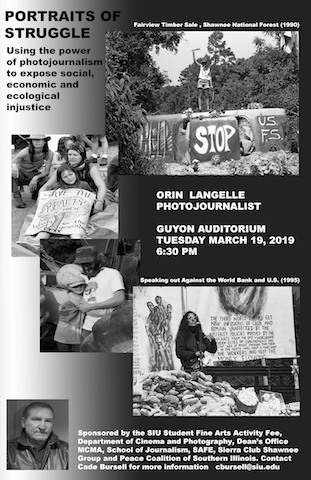 will share his images from Shawnee National Forest protests of more than two decades ago as part of a presentation this month at Southern Illinois University Carbondale.

Langelle will present “Portraits of Struggle: Using the power of photojournalism to expose social, economic and ecological injustice” during a visiting artist lecture at 6:30 p.m., March 19 in Morris Library’s John C. Guyon Auditorium. The event is free and open to the public.

Langelle, of Buffalo, New York, describes his work of more than four decades as a “historical look at social movements” where he documents topics that include struggles of communities, activists, workers, women and Native Americans against:

Some of Langelle’s awards include the CEPA Gallery Members’ Exhibition Award in January 2017 and two awards from Environmental Action Magazine in the late 1980s for “recognition of photographic excellence in exploring humanity’s effect on the earth and the action to protect the environment.”

Langelle’s blog is listed by Feedspot as one of the top 50 photojournalism blogs as of January 2019.

Langelle’s far-reaching work covers a numerous interests. Those include:

Documenting struggles around the world

Cade Bursell, a professor in SIU’s cinema and photography program, said Langelle’s “powerful presentation” includes work that documents “struggles from around the globe.”

“Langelle uses the power of photojournalism to expose social, economic and ecological justice,” she said.