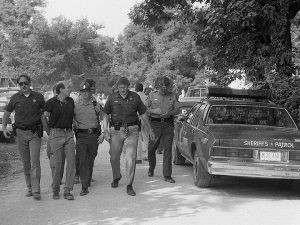 A protester being escorted by authorities at the Fairview Timber Sale in 1991. photo: Orin Langelle/GJEP

Photojournalist Orin Langelle presented his work Tuesday evening, March 19, in the Guyon Auditorium, 605 Agriculture Dr, Carbondale, IL. His work depicted people struggling to win back the land, the forests and their autonomy.
–

“Just a shout out of thanks to Orin Langelle for his presentation Portraits of Struggle,” said Cade Bursell, professor of Cinema and Photography in the College of Mass Communication and Media Arts, Southern Illinois University. “What an amazing body of work! The next morning he attended four classes from eight untilnoon and spoke with students about his work and passion for social and environmental justice through photojournalism.”
–
Not only did Langelle show photographs from his exhibit, Portraits of Struggle, he presented shots from southern Illinois when he was involved in the occupation of the Fairview Timber Sale in the Shawnee National Forest in 1991.
–
For 79 days, activists camped out on an access road, blocking the timber harvest. The encampment attracted local, statewide and national attention, as dozens were arrested and one demonstrator was injured by a logging truck, according to the Chicago Tribune. Throughout it all, Langelle documented their struggle.
–