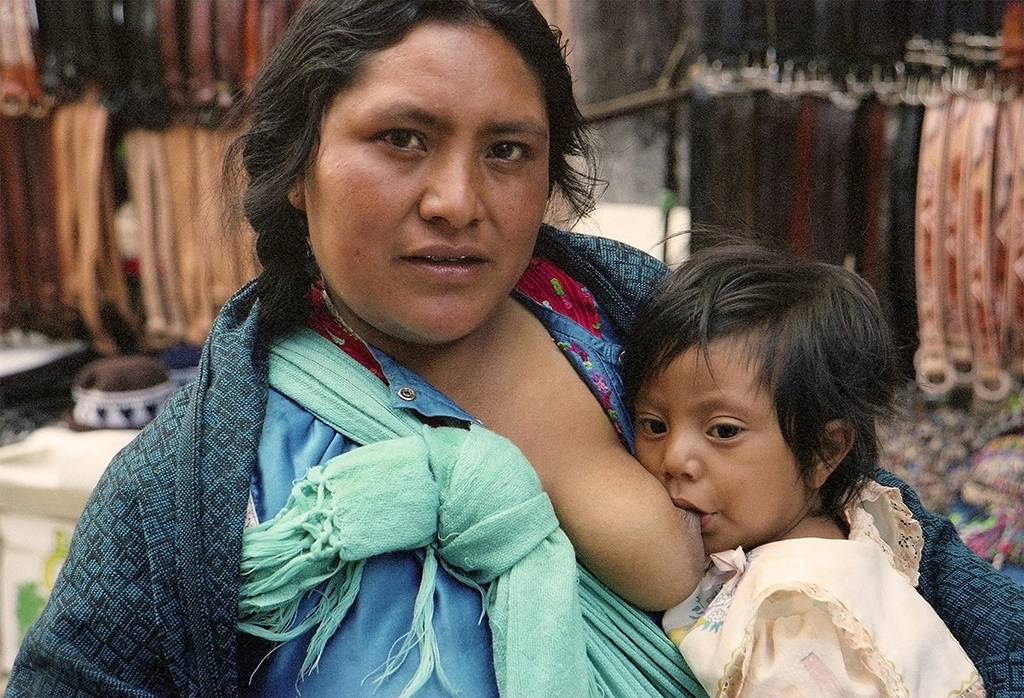 Making the radical history of struggle part of the struggle

Radical history in a world becoming more authoritarian and in unprecedented ecological crisis disrupts the sense of inevitability and hopelessness so many people feel. It inspires resistance.

Radical history digs out the alternatives that powerful elites covered up or falsified for their own ends – alternatives displaced by a more respectful or sanitized history – a distorted, commodified version of reality that elites want society to believe – a controlled dominant social orchestration of forgetting and obfuscation, leading to historical amnesia.

Radical history used as an organizing tool widens the ability to understand and share the knowledge and feelings of people involved in past struggles.

The photographs and words that follow remember an example. And to remember examples are not just about chronicling history, but they are a call to inspire new generations to participate in the making of a new history. For there has been no time when such a call has been so badly needed in order to resist the power elites and their insatiable greed that is pushing an end to life on Earth as we know it.

“…the ancestral thought of the Zapatistas who declare without shame or fear that the place of knowledge, the source of word and the truth is in the heart. Modern death verses ancestral life. Neoliberalism against neozapitismo. Why do they fear us? Why so much death for those so small and so few? Because we have challenged them, and the worst thing about a challenge is that it tends to become an example.” – Subcomandante Marcos, La Realidad, Chiapas, Mexico (1996)

In actuality this decade started 500 years ago with the European invasion of the Americas. In Chiapas that beginning forced the “poorest of the poor” in 1994 to defend their dignity and the land through armed struggle. The Indigenous Peoples did not start the war; they were provoked. 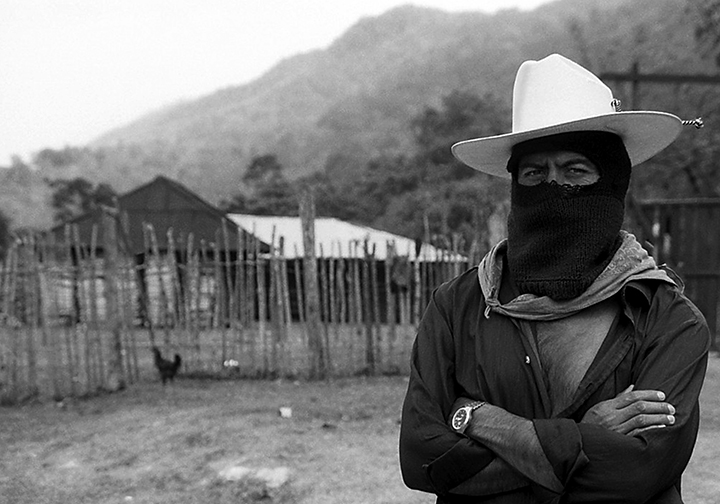 Comandante – Rebel territory, Chiapas, Mexico (1996) La Realidad is the headquarters of the General Command of the EZLN (Zapatista Army of National Liberation). The Zapatistas condemned NAFTA (the North American Free Trade Agreement) as “a death sentence for the Indigenous Peoples of Mexico” due to many of its unjust provisions, but especially the revision of Article 27 of the Mexican Constitution. Article 27 guaranteed people rights to communal ejido lands in Mexico. It was an outcome of the revolution led by Emilano Zapata–from whom the Zapatistas took their name–in the early part of the 20th century. But in order for NAFTA – the free trade agreement between Canada, the U.S. and Mexico– to be passed, Article 27 had to be eliminated.

Early in the morning on that same New Year’s Day, in the Mexican state of Chiapas, an army of Indigenous Peoples, some using only wooden cut outs as guns, emerged from the Lacandon jungle of Chiapas, Mexico and occupied the towns of Ocosingo, Las Margaritas, Altamirano and San Cristobal de las Casas.  Municipal buildings were seized, prisoners freed from jails and government shops opened to the populace. The Zapatista Army of National Liberation (Ejército Zapatista de Liberación Nacional, EZLN), or Zapatistas then issued the Declaration from the Lacandon Jungle denouncing NAFTA as a “death sentence” for the indigenous peoples of Mexico.

In January 1995 – one year after the passage of NAFTA and while the Zapatista uprising was still fresh and garnering support from all corners of the globe – Chase Manhattan Bank sent a memo to the Mexican government which was leaked. This memo urged the Mexican government to “eliminate the Zapatistas to demonstrate their effective control of the national territory and of security policy” or risk a devaluation of the peso and a fleeing of investors.

In February 1995 – Mexican President Ernesto Zedillo ordered the arrest of suspected EZLN “leaders,” and the Mexican military invaded Chiapas’ autonomous regions making war on the population in an attempt to stabilize the financial concerns of foreign investment whose security is the fundamental purpose of NAFTA. Later the Mexican military followed the Zapatistas deep into the Selva Lacandona. Fearing reprisals from the approaching military, an estimated 20,000 of the Indigenous population and peasants followed the EZLN into the Lacandon rainforest. But the people eventually returned to their homes after hardships in the jungle, including drinking their own urine to survive.

The demands of the Zapatistas were simple: work, land, housing, education, autonomy, freedom, democracy, justice and peace. And with dignity.

The Zapatista challenge was manifested by remembering ancestral thought – putting other peoples’ needs before theirs – listening – respecting women – believing in collective governance – working for the Earth, not against it – acknowledging the rights of the LBGTQ community and other disenfranchised peoples – understanding that workers are not tools to make others wealthy.

Despite all efforts to eliminate the Zapatistas, from financial to the use of military force, Zapatista communities still resist and live in the Selva Lacandona and the concept of zapatismo continues to this day. And events that unfolded in Chiapas during the 1990s inspired the anti-corporate globalization movement that shocked the world when that movement shut down the World Trade Organization in Seattle in 1999.

As Subcomandante Marcos stated, “…we have challenged them, and the worst thing about a challenge is that it tends to become an example.”

In the 1950s and 60s the Mexican government looked to its southern extremities as a dumping ground for their unwanted indigenous and peasant populations. The current situation in Chiapas is an outcome of the long history of unresolved land conflicts in southern Mexico and Chiapas. Many of the current settlers’ parents and grandparents moved to the Lacandon Jungle, at the behest of previous governments, to escape the oppressive and degrading working conditions that are present on southern Mexico´s large landed estates. They are of Tzotzil, Tseltal, Tojolobal and Chol ancestry, representing the cultural diversity of the traditional Mayan peoples of Chiapas.

Governmental policies that forced hunger motivated the “unwanted” to clear parts of the rainforest for survival. After the felling or slash and burn, came the planting of corn and beans.  Then after a couple of years, when the soil was depleted for agriculture and only grass could grow, the “unwanted” moved deeper into the Lacandon followed by the next cash crop:  cattle and cattle ranching. 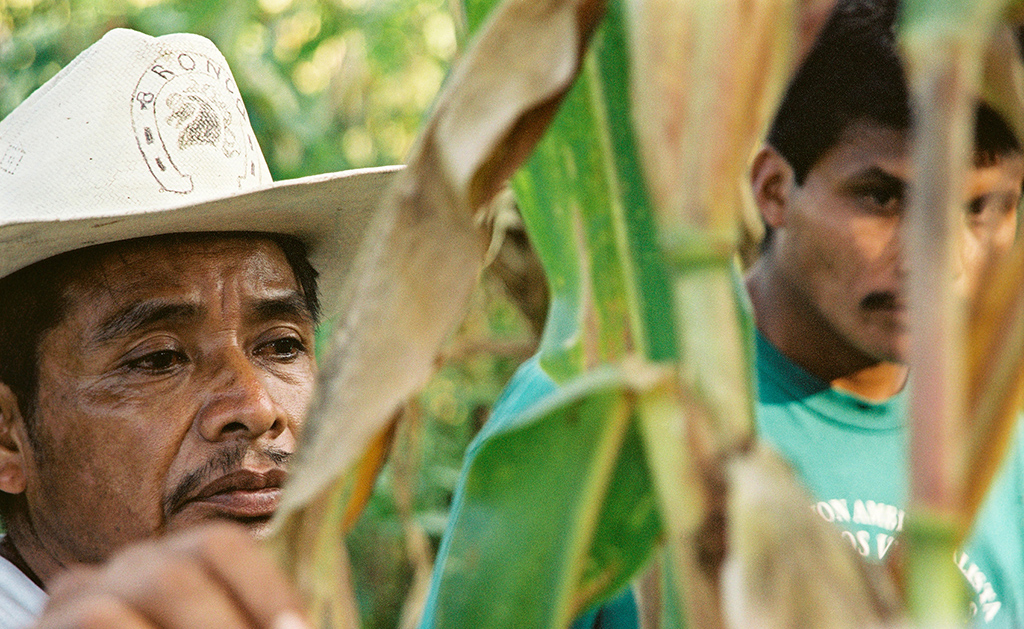 Campesinos working in a Milpa—Nuevo San Gregorio, Chiapas, Mexico (2003) Many of the communities, like Nuevo San Gregorio, were cooperating in an important experiment to demonstrate a more sustainable way of living on the land. They ceased using slash and burn agriculture and ended the use of harmful chemicals. They were developing new organic methods of cultivation based on some of the most traditional means of caring for the land. The community was facing forced relocation from the Lacandon jungle for a conservation project. Nuevo San Gregorio refused and was not evicted.

In the spring of 2003 the Mexican government planned to displace indigenous peoples from the Lacandon. Many of the indigenous peoples were subjected to severe harassment by various government authorities, including the federal environmental prosecutor. The authorities charged that indigenous communities were destroying the rainforest, where they lived. In reality the relocations were being carried out as a pretext for further commercial exploitation of the region, such as oil exploration, bioprospecting, and the construction of hydroelectric dams.

The ecological damage done by these communities, however, was minimal, especially in comparison to the extensive damage resulting from roads, cattle ranches, logging, military bases and other commercial uses of the land. The forced relocation of indigenous peoples had nothing to do with protecting the ecosystem in question, and in actuality it was paving the way for more exploitation of the land and future trade agreements.

The threatened communities, made up of both Zapatista and non-Zapatista, organized and were not relocated.

Refugees from one community however, Arroyo San Pablo, were forced out of the rainforest in December 2002 and relocated to a government-run shelter in the city of Comitan. The conditions were dismal and the people dispirited by the government´s apparent inability – or unwillingness – to resolve their situation.

“It is war. A war against humanity. The globalization of those who are above us is nothing more than a global machine that feeds on blood and defecates in dollars.” – Subcomandante Marcos, Chiapas, Mexico (2003)

In 2010 California’s then-Governor Arnold Swarzenegger penned an agreement with Chiapas, Mexico’s Governor Juan Sabines as well as the head of the province of Acre, Brazil. This deal would provide carbon offsets from forests in Mexico and Brazil to power polluting industries in California—industries that wanted to comply with the new California climate law (AB32) while continuing business as usual.

But the forest carbon offset scheme required that the forest be uninhabited and its carbon “protected”. Amador Hernandez was one of the indigenous villages in the Lacandon jungle that was slated for forced relocation. Already Amador Hernandez had been denied medical supplies for over a year, and the Mexican government had suspended emergency transport of the gravely ill. 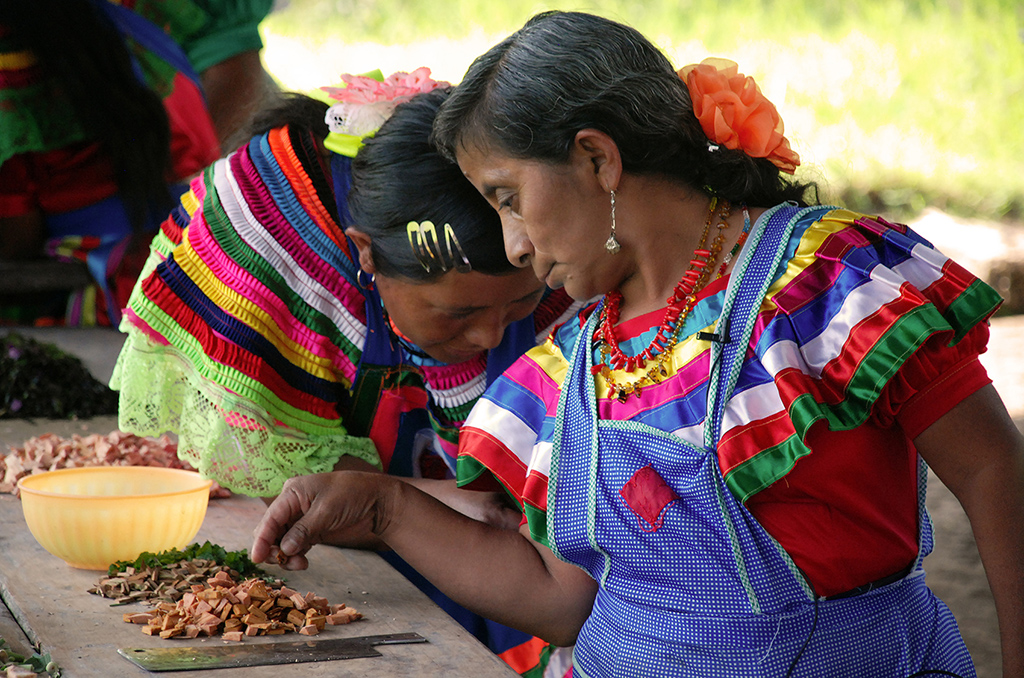 Women Traditional Healers – Amador Hernandez, Chiapas, Mexico (2011) Women prepare their traditional medicines, which they harvest from the jungle. The Mexican government wanted the community to leave the jungle so they could sell the forests for “carbon offsets.” To accomplish this, the government suspended medical support to the village. There are no roads to or from Amador Hernandez and horseback is one of the few ways to travel the fifteen kilometers out of the community. When this photo was taken, the Mexican military was scheduled to arrive in four days to forcibly remove the community. The people of Amador Hernandez refused to leave and were not relocated.

The Mexican military back downed and Amador Hernandez was not relocated. People from that community educated and organized other communities about the threat from the carbon offsets’ scheme The people of Amador Hernandez continue to live on their land (as of 1 August 2018).

2011 Communiqué from the People of Amador Hernandez, Chiapas:

We, the residents of Amador Hernandez …, which forms the core of the Montes Azules Biosphere Reserve [in the Lacandon rainforest], well known for its extraordinary biological richness, and the site of historic resistance by indigenous peoples, denounce that the illegal threats by the bad government to expel us, culturally and physically, from our territories, have moved from words to deeds.

Our opposition to the theft of our territory, as decreed in May 2007; our rejection of the unilateral delimiting of the agrarian border of the Lacandona Community demanded by investors in projects associated with the REDD+ [Reducing Emissions from Deforestation and Forest Degradation] Project; our refusal to accept the conservationist programs of “payment for environmental services” and “productive land reconversion,” and our decision to reinitiate a process of self-determined community health based in our traditional medicine, together have aroused the arrogance of the bad government, motivating them to advance a “new” counterinsurgency strategy to undermine our resistance.

It is a strategy that doles out sickness and death, dose by dose.

Addendum: Although the community of Amador Hernandez is still there, the threat of forced relocation is still present. Instead of the tri-lateral carbon offset attempt in 2011, now Mexico itself, has opened up a national carbon market. It is yet to be seen how the new leftist President Andrés Manuel López Obrador will handle situations in the Selva Lacandona when he comes to power.

End Notes: If we are to look toward a future it is important to remember our past while living in the present. For the past provides inspiration on how we can live in our future.

The photographs and words presented in this sketch remember an example. It is a brief sketch and as with anything there is much more to every story. But I will continue to remember what I documented in Chiapas, Mexico’s Selva Lacandona – an ongoing struggle of resistance. 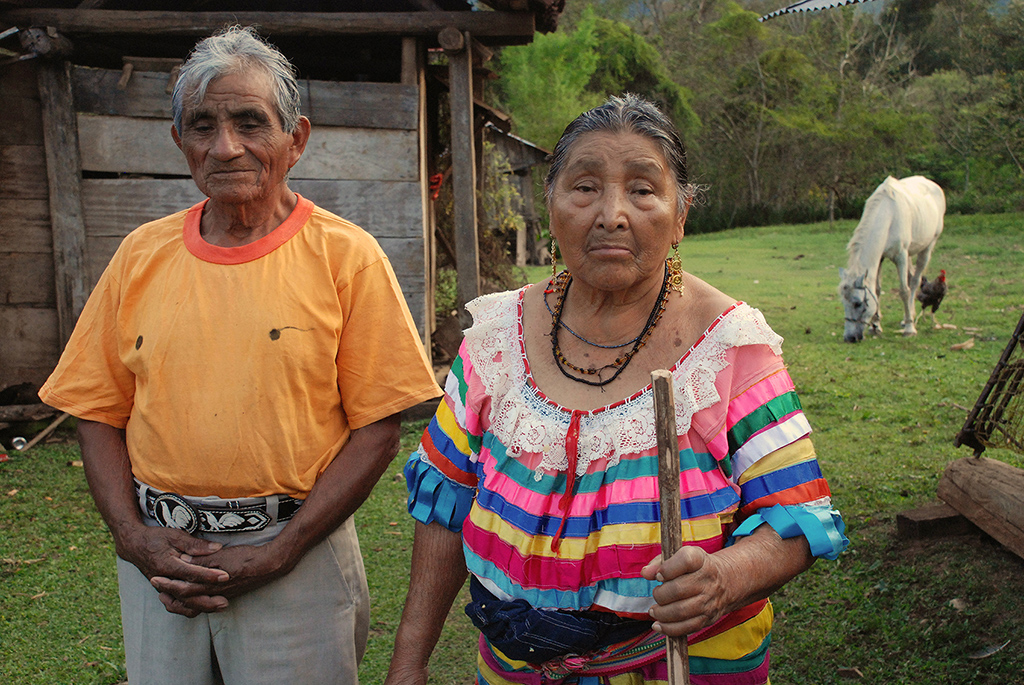 Elders – Amador Hernandez, Chiapas, Mexico (2011) This was the first time these elders had their photograph taken. The photograph was requested by their son.

One Response to “Remembering Examples: Three Decades of Resistance in Chiapas, Mexico – REDUX”