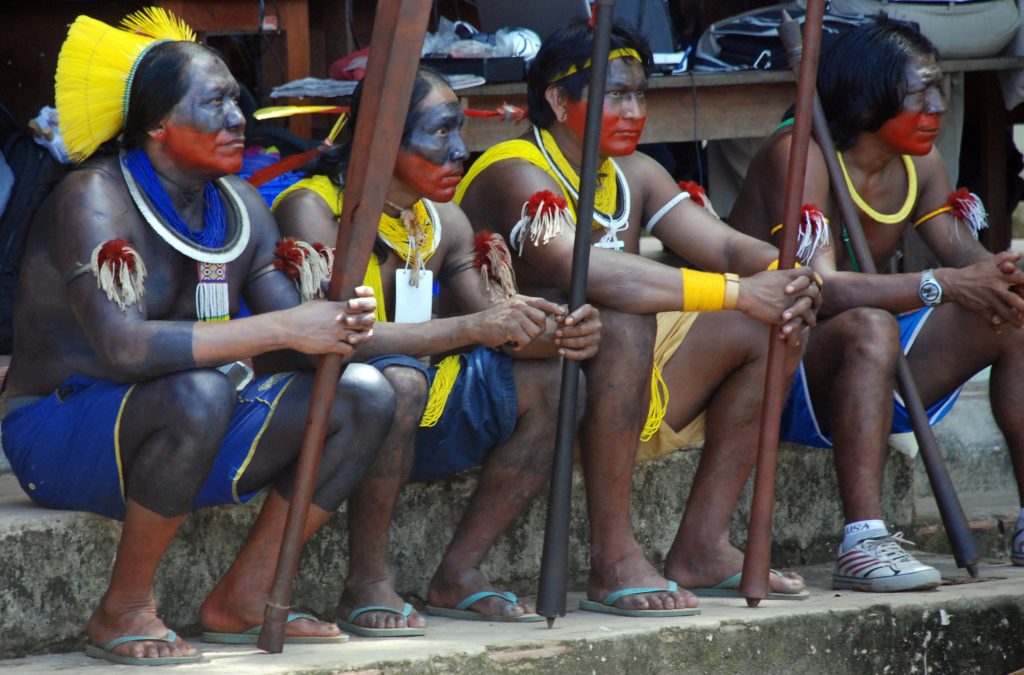 Some of the Indigenous Peoples from the Amazon region that attended the World Social Forum in Belém, Brazil (2009). photo: Langelle/GJEP-GFC

Photo essay and commentary by Orin Langelle. This was submitted to Z Magazine in January 2009. Langelle, with Global Justice Ecology Project, also was the Media Coordinator for Global Forest Coalition.

Over 100,000 people from around the world participated in the World Social Forum held in Belém, Brazil from January 27 to February 1, 2009.  Belém sits at the mouth of the Amazon River.

Starting with the first World Social Forum held in Porto Alegre, Brazil in 2001, World Social Forums have been the counter to the World Economic Forum which holds it’s annual meeting in Davos, Switzerland at the same time.

[This photo essay, re-published on 23 January 2019, finds the WEF meeting occurring as usual in Davos; while Brazil has a new right-wing fascist president, Jair Bolsonaro, the antithesis of everything the WSF stands.]

Despite the heat, humidity, torrential rain and long travel distances, this year’s WSF brought together very large contingents of Indigenous Peoples from the region with youth, women, social, environmental and climate justice activists as many different causes and issues were raised.

At the opening of the WSF, more than a thousand Indigenous Peoples from around the world send an urgent message making a huge human banner that read in Portuguese:  Salve a Amazonia (Save the Amazon).

The largest event was a meeting with the leftist presidents  Evo Morales of Bolivia, Luiz Inácio Lula da Silva of Brazil, Rafael Correa of Ecuador, Fernando Lugo of Paraguay and Hugo Chávez of Venezuela. While many lauded this event, to some this was a contradiction to the spirit of the power of social and Indigenous Peoples’ movements that are looking for a more autonomous approach based in self-governance.

The motto of the World Social Forums, which continues to this day, is “Another World is Possible.”

Prior to the beginning of the WSF, organizers stated, “The Pan-Amazon will be the territory of the 9th edition of the World Social Forum. For six days, Belem, the capital of Para, Brazil, takes the place of the center of the region to shelter the greatest anti-globalization event of today and brings together activists from more than 150 countries in a permanent process of mobilization, articulation and search for alternatives for another possible world, free of neoliberal politics and all forms of imperialism.”

The WEF brings together the the economically and politically powerful: top business leaders, international political leaders, selected intellectuals and others to discuss how to keep market based mechanisms functioning for the benefit of the economically elite.

The World Social Forum (WSF) was created to be an open space where plural, diverse, non-governmental and non-partisan participation stimulates decentralized debate, reflection, proposal building, experiences, exchange and alliances among movements and organizations engaged in concrete actions towards a more democratic and fair world.

[One of the strangest interviews I ever was involved in was a midnight broadcast by Al Jazeera with Miguel Lovera from Global Forest Coalition. When we showed up to where Al Jazeera was broadcasting from the WSF, Miguel and I were informed this was going to be a live short back-and-forth between one of the people at the World Economic Forum in Davos and Miguel. The strange part of this was that the person at the WEF could hear Miguel but Miguel couldn’t hear him. Miguel had to wing it and he nailed it.] – Orin Langelle