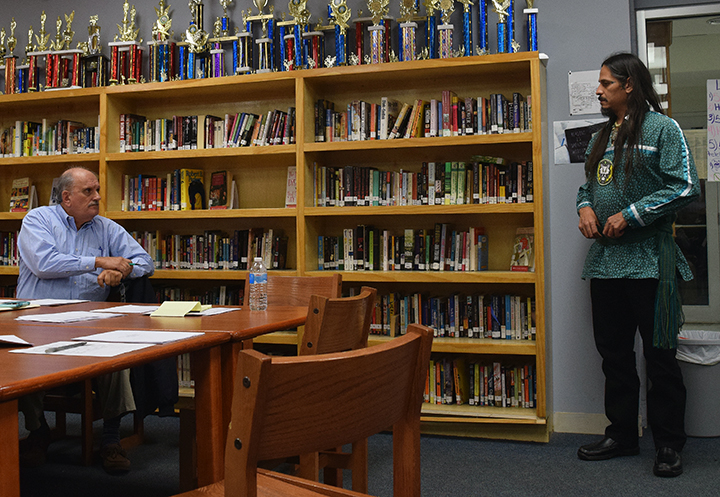 Degawenodas (right) gives serious stare to one of the board members.        photo: Langelle/GJEP-photolangelle.org

More on the Sacred Seneca Burial Grounds. This is from Buffalo Rising. It includes a conversation with Degawenodas Ni Ah Agatayonih, born into the Wolf Clan of the Onondowa’ga:’ “I come in peace, but I am armed with the weapon of truth.”

We are all excited to see the city of Buffalo reworked into a world class city. For some of us, nothing can stand in the way of making this happen, and that’s an admirable stance to take. But when we say “nothing”, do we really mean “nothing“?

Let’s take a step back and consider why Buffalo is different than other cities. We are a great city because of our people, our history, our heritage, and our love and respect for one another.

I want to see Buffalo built up, just as much as the next person. I want to see this city strong. At the same time, I understand that Buffalo is only as great as the sum of its parts. The parts that I am referring to include buildings, businesses, parks, schools, and people. All of its people. And when we talk about people, it’s important to talk about heritage.

Last month, I learned that there was a proposal on the table, to build an expansion of the Maritime 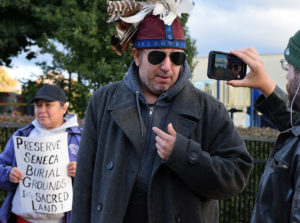 Recent rally where Carl Jamieson (Cayuga) gives a statement to the media outside of the Maritime Charter High School. Photo: Langelle Photography

Charter School on Buffum Street in South Buffalo. The charter school has outgrown its 266 Genesee Street location, and has purchased the former School 70 (long closed) at 102 Buffum to house its seventh and eight grades (now operational). This is great, considering that the building is already there – there’s no issue at hand. But moving forward, the school is looking to consolidate and expand to Buffum Street, which would further disrupt the site of the Indian burial ground. According to WBFO, “there is a $13 million plan for a gym and a high school building to open in September 2020. That would consolidate 450 students and 75 faculty.” The developer of the three-story, 65,000 sq.’ building, and 24,000 sq.’ gym is Ellicott Development. To continue