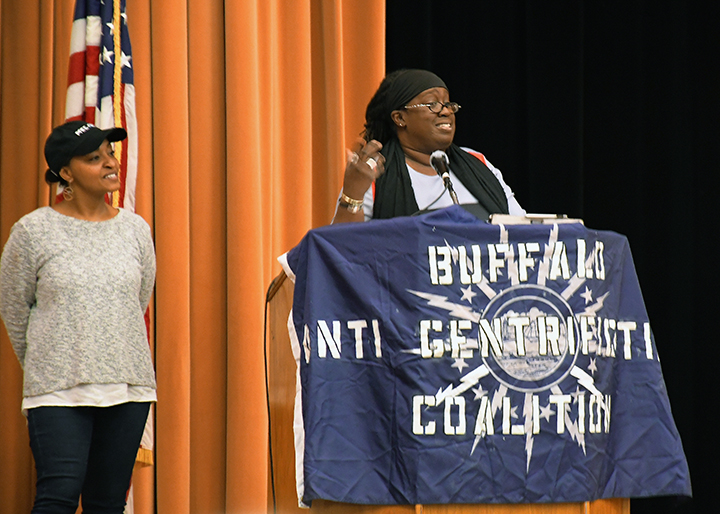 On 17 November 2018, the OUR CITY coalition presented the Second Annual Anti-Gentrification Summit and said it would be “a day of inspiration and workshops that will help arm the citizens of Buffalo with the tools and information needed to combat the issues that matter most to us – the people!” The Summit took place at the East High School in Buffalo, NY’s East Side. The East Side is one of the most polluted areas in Buffalo.

Keynote speaker Jacqueline Patterson, NAACP’s coordinator and co-founder of its Environmental and Climate Justice Program, addressed the large diverse crowd on such themes such as climate change, capitalism and the power of the people to stand together in determination and love.

Some of the workshops scheduled at the Summit included ‘From Undocumented to Citizen: Building a City Where All Immigrants are Able to Live With Dignity and Their Rights Protected,’ ‘There’s More Than One Justice. How about Climate?’ along with ‘Collective Ownership for Community Wealth’ to name a few.

Global Justice Ecology Project‘s Executive Director Anne Petermann and I attended the conference after we were invited by Clarke Gocker, Director of Policy and Strategy of PUSH Buffalo (People United for Sustainable Housing). We both had heard of PUSH and knew a little about them, but  started to know more about them when I presented last month in Resilience: Through the Lens, a photo class for the community, organized by The Clean Air Coalition of Western New York, and the CEPA Gallery | Contemporary Photography and Visual Arts Center. Clarke was one of the people who attended.

The following week Clarke and I got together at the PUSH offices to discuss the Summit. He thought it would it would be good if I could do a workshop during the Summit. Due to a variety of circumstances the workshop didn’t happen this time.

Clarke told me when we met at the PUSH offices prior to the Summit that he was inspired by my work documenting the resistance of communities, both globally and nationally. And how my photos on displacements–such as schemes to take Indigenous Peoples’ lands that would lead to the relocation of those communities, to other communities standing up to displacement due to fracked gas pipelines–could connect to anti-gentrification work. I never thought of my work relating to gentrification, but it made sense.

Most of my life I’ve worked to find and expose the intersections between ecology and economics; helping bridge one issue to other issues to help build anti-capitalist solidarity. But like so many others there is almost always is a disconnect of issues somewhere and gentrification was my disconnect. It is no longer.

Many of us who have worked for the planet, for communities and for the people have had instances of not finding, or unable to build, the bridges necessary for open dialogue. It happens far more too often than it should.

Gentrification and other Land Grabs can be bridges of understanding between those who live in cities and those who live in less populated communities. And like it or not, climate chaos is a bridge to the mutual aid we all must practice because I don’t believe the government will be of much assistance except to help the ruling class that is predominantly white.

An interesting article, HOW THE RICH WILL SURVIVE CLIMATE CHANGE DISASTER was published online in The Outline. Here is the final paragraph:

We are entering a dystopian future in which class-privileged white people are using privatized systems and their obscene wealth to avoid the catastrophic environmental effects of the racist capitalist system that they forced upon the world. While they are funding these privatized resource systems with the wealth they built off of marginalized peoples, wealthy white people are simultaneously supporting Trump in droves, who blamed forest management for [the California] fires and derided a United Nations report released last month finding that the world has 12 years to avert global environmental catastrophe. These fires and their disparate impact demonstrate a necessity for structural action on climate change and support for those who will be most harmed—poor people and people of color.

On a much brighter note it was great to see and talk, unfortunately only briefly, with Jacqui Patterson. Anne Petermann I have known Jacqui for over a decade due to working on Climate Justice issues nationally and internationally. Not many people can say that they’ve driven into a hurricane so they could be there to be of assistance. Jacqui can.