“People have to think more holistically about their actions. Everything comes down to ‘how much money can I make from this.’ Until this changes, all this talk of environmental protection is bullshit.” Cree Helen Atkinson in Whapmagoostui, Québec, Canada 1993 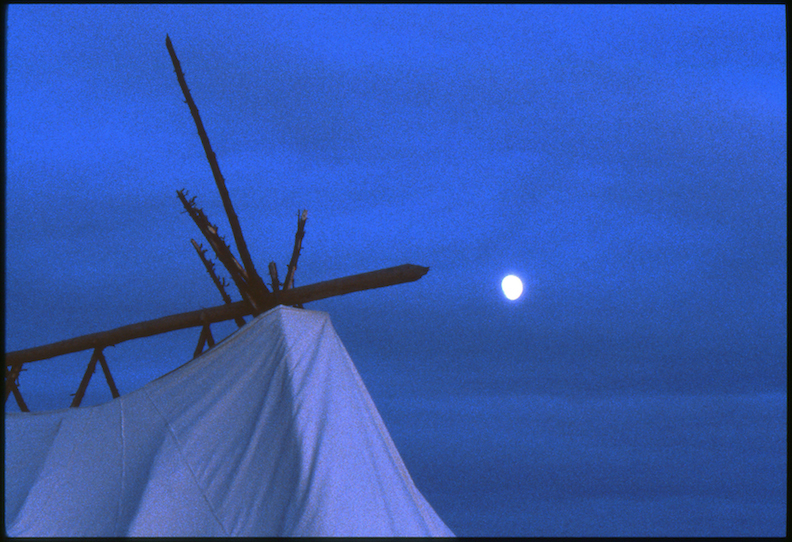 Cree Trapper Tent w/ moon during the First Whapmagoostui major gathering of Cree, Innu and Inuit Indigenous Peoples. It was photographed by Orin Langelle in 1993 during a documentary expedition with Anne Petermann to the James Bay region. The expedition investigated the impacts on the Indigenous inhabitants of Hydro–Québec’s (H-Q) existing hydro-electric dams on the La Grande river, as well as their resistance to future planned H-Q dams on the Great Whale (Whapmagoostui) river. The expedition was part of an international campaign that ultimately stopped H-Q from damming the Great Whale river in Northern Québec, Canada. The findings of the expedition were reported at the North American Temperate Forest Conference in Burlington, VT that year.

The conference was organized by Eastern North American Native Forest Network co-Coordinators Anne Petermann and Orin Langelle. The NFN was founded at the First International Temperate Forest Conference in Tasmania (AUS) in 1992. Please see Native Forest News article at the bottom of this post.

The First North American Temperate Forest conference helped increase awareness within the forest movement of Indigenous Peoples’ views on the meanings of forests; some calling forests home. The conference provided space for dialogue to build and broaden strategies of resistance and alliances. Because the conference highlighted the situation with Hydro-Québec’s (H-Q) continued attempts to build mega-dams on sovereign Cree and Inuit territories, plans were made for an international day of action on the 50th anniversary of H-Q the following April (1994).

H-Q did not have a happy anniversary. Protests took place across the globe. The state of New York then cancelled their H-Q contract, and, along with mounting opposition by Cree and solidarity activists internationally, H-Q put their Great Whale Project “on ice.”

Inspired by the conference, activists also formed a solidarity group with Innu in opposition to H-Q’s proposed dam on the Sainte-Marguerite River, a tributary of the lower Saint Lawrence River, in eastern Québec (SM-3 project). Non-native activists from the U.S. joined the Innu in a blockade of a SM-3 construction road in 1994. The blockade stopped H-Q from proceeding for months. A groundbreaking (at that time) communication tactic consisted of daily international reports from the blockade. The blockaders used Citizen Band radios to communicate with activists in Sept-Îles, Québec about what was going on. They then called in the report to the Native Forest Network office in Burlington, VT, which then used the internet to send the report nationally and internationally.

The conference had far-reaching impacts and those impacts can still be found. Even today there is opposition to mega-dams on Indigenous Innu, Inuit and Cree territories of eastern Canada with the North American Mega-Dams Coalition. This group came together recently to raise awareness of and campaign against the construction of large-scale hydroelectric dams with a focus on the impacts of existing and planned Hydro-Québec dams.

The Resurgence is scheduled to be held in the Shawnee National Forest in southern IL from 11- 14 October 2019.

The conference is intended not just for forest defenders, but for all who are working on the interconnected issues of Indigenous and land sovereignty, corporate domination, extreme energy extraction, climate change and social justice; as those who understand that connecting these and other movements is critical to build the power that will enable participants to succeed in individual, organizational and collective goals.

This convergence will provide the space for dialogue to build and broaden strategies of resistance and alliances that can identify and expose the root causes of planetary destruction – and confront them head-on.

Organizers of The Resurgence state:

A war is being waged on communities and the earth. Governments, corporations and elites in North America are collaborating with others of their ilk globally to maximize power, profit and control even as their actions threaten whole peoples and the entire biosphere. But the mask has been lifted and we see this fanatical band of robber barons for who they are; they are destroying the Earth and all of her inhabitants for profit.

We must rejuvenate: bring in new energy, consolidate and coordinate existing campaigns to create a movement powerful enough to stop further devastation of crucial ecosystems and begin the process of healing through resistance. We can also find inspiration and ideas in the traditional knowledge of Indigenous Peoples.

The recent report from the United Nations Intergovernmental Panel on Climate Change that said all life on Earth is in extreme danger if in a decade or so we don’t change political and economic systems. The clock is ticking and time is running out. Now is the time to organize and unite with diverse and related struggles in order to build and strengthen the global movement toward the fundamental, transformational, systemic change necessary to achieve a sane future on Earth.

The forest is rooted in an intricately interconnected ecosystem: the soil microorganisms, the birds, insects, herbs, shrubs, trees, mammals, amphibians, fungus and those that have no name. We can mirror the forests in our organizing. The more diverse the forest movement, the more interconnected with other movements, the more focused on the roots, the stronger and more resilient we will be.

It is time to build a powerful resurgence for all people to come together to honor and protect Mother Earth.

The convergence in the Shawnee National Forest is in its beginning stages. For more information or to get involved, please contact <[email protected]> 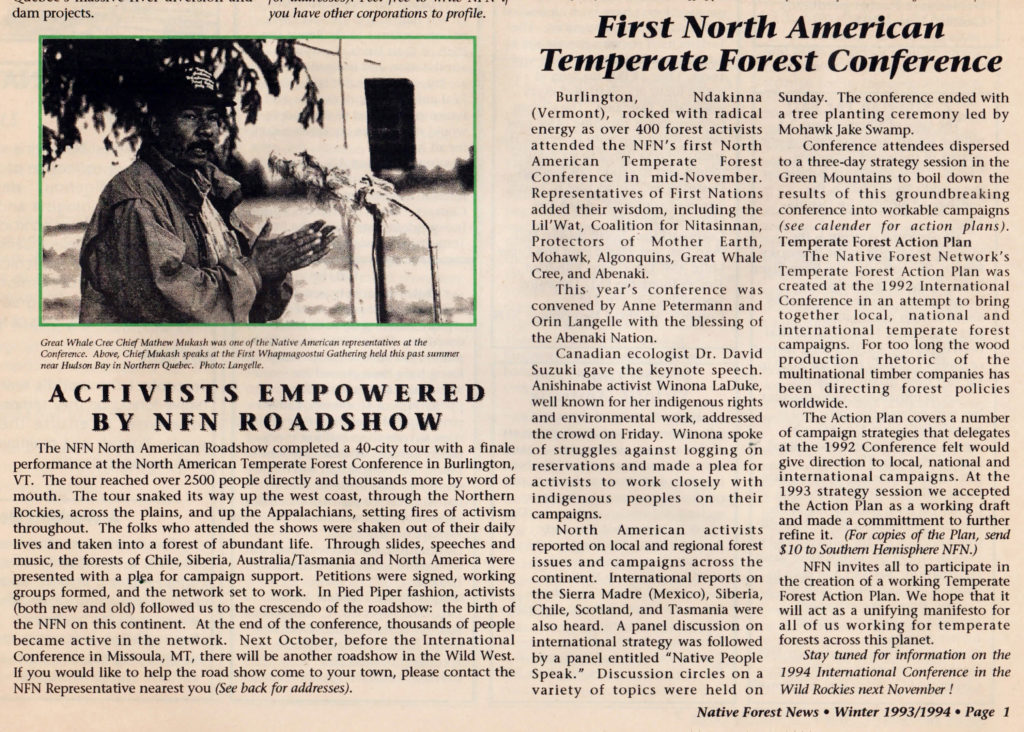 If we pollute the air, water and soil that keep us alive and well, and destroy the biodiversity that allows natural systems to function, no amount of money will save us.” – David Suzuki