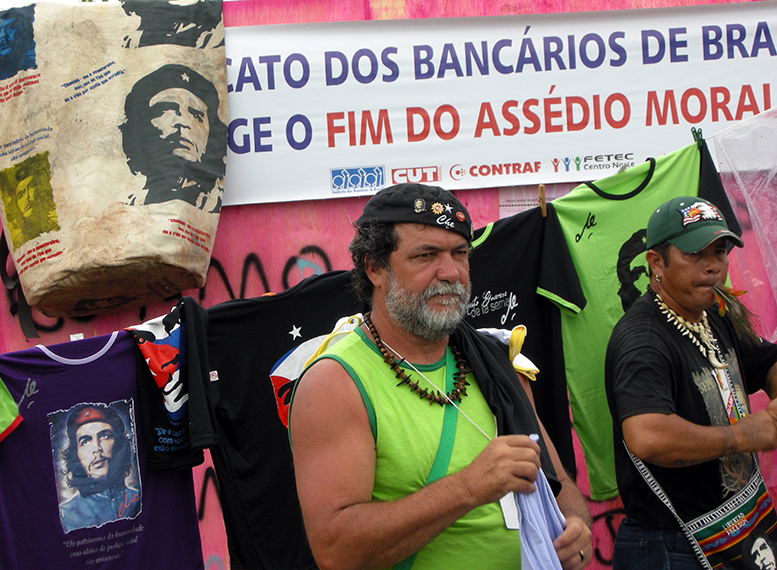 Men and images of Ernesto “Che” Guevara at the 2009 World Social Forum held in Brazil in Belém. Belém is the capital of the state of Pará, a port city and gateway to Brazil’s lower Amazon region. photo: Langelle/GFC-GJEP

I think this is a fitting photo of the month for October for many reasons, including that Che is an icon in many parts of the world, especially Latin America, and his death is remembered during this month. The U.S.-military-backed Bolivian forces captured Guevara on 8 October 1967 while battling guerillas in Bolivia and assassinated him the following day. He was executed by shooting on 9 October in La Higuera, Bolivia. In Cuba and other places in the world, 8 October is noted as “Day of the heroic guerrilla fighter (Dia del guerrillero heroico).” Guevara was a key revolutionary during the Cuban Revolution, an armed uprising in Cuba that overthrew the government of Fulgencio Batista on 1 January 1959. One only needs to look into peoples’ history to find out more of Che.

The other reason I chose this photo is because it was taken in Brazil. Brazil is at a critical juncture in history. Jair Bolsonaro is a Brazilian fascist, politician and former military officer running for the president of that country. This right-wing candidate compares himself to Donald Trump. Bolsonaro won the first round of elections in Brazil on 7 October 2018 by a five point margin – but not enough for the presidency. The final election is on 28 October 2018 pitting the right-winger against Hernando Haddad, presidential candidate for the Workers Party who is supported by former President Luiz Inacio da Silva. Da Silva was not allowed to run for president while he is in jail on what some claim are trumped up corruption charges.

Here are some quotes by the fascist Jair Bolsonaro:

“I’m in favor of the military regime.

Pinochet should have killed more people.

I’m in favor of torture. You know that. And the people are too. Through the vote, you’ll change nothing in this country. Nothing, absolutely nothing. We’ll only get change, unfortunately, when we go into a civil war here someday and do a work the military regime didn’t do, killing as much as thirty thousand people… It’s all right if some innocent people die. Innocent people die in many wars.

There is no doubt. I would launch a coup on the same day. [Congress] doesn’t work and I’m sure that at least 90% of the population would applaud. Congress nowadays does nothing; it votes only for what the president wants. If he’s who rules, who decides and who gloats above the Congress, then let the coup be launched, let it be a dictatorship.

I never hit my ex-wife. But many times I wanted to shoot her.

I think execution by firing squad is even an honorable thing to certain people.

I will not fight against it nor discriminate, but if I see two men kissing on the street, I’ll beat them up.

I would be incapable of loving a homosexual child. I’d rather have a son of mine die in an accident than appear with a mustache next to him.

I went to a Quilombo [territory inhabited by Afro-Brazilian descendants of escaped slaves]. The lightest Afro-descendant weighed seven arrobas (around 225 pounds). They do nothing. I think they don’t even serve to procreate. Over US$245 million is spent on them every year. … There will be not one centimeter for an Indigenous reserve or for a Quilombola.

Che Guevara is remembered as an inspiration and a freedom fighter, while the fascist Bolsonaro is considered a monster, against whom peoples across Brazil are mobilizing

“The true revolutionary is guided by a great feeling of love. It is impossible to think of a genuine revolutionary lacking this quality…If you tremble with indignation at every injustice, then you are a comrade of mine…I know you are here to kill me. Shoot, coward, you are only going to kill a man.”