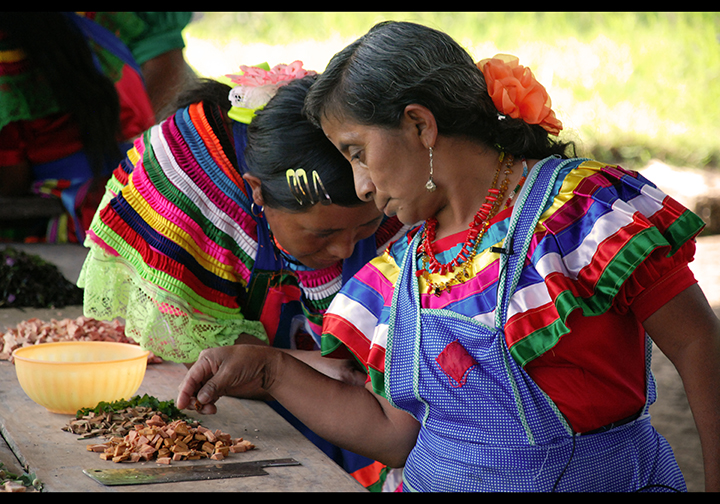 “They see our Mother Earth as a business, and for us you should never see it like that. It’s our Mother, she can’t be sold.” ‘Francisco,’ Lacandon Jungle, Amador Hernandez, Chiapas, Mexico in A Darker Shade of Green (2012)

The myth of offsetting carbon emissions with forests

Forest carbon offsets neither protect forests nor reduce emissions. They allow continuation of business as usual. Under forest carbon offset schemes, forests are priced according to the carbon they contain, and credits can be earned by preserving those forests. Corporations can then buy those credits that are then used to further pollute rather than decrease their emissions.

For example, at the notorious Chevron refinery in Richmond, California, “offset” emissions will continue to devastate surrounding communities, and the gross level of emissions remains the same.

The tortured equations of forest carbon offsets also impact Indigenous and forest dependent communities globally, through forced relocations of entire societies so that governments can take over forests and sell the carbon stored as offsets.

Beyond the social injustice of forest carbon offsets is the simple scientific fact that offsets literally mean a net result of standing in place. If today’s living species are to survive, this will not suffice; what is required are drastic reductions in emissions at the source.

SHOULD WE PUT A PRICE ON CARBON? That Depends – Who Are “We”?

Presentation for the Panel “Should We Put a Price on Carbon?” Sheffield University Festival of Debate, 11 May 2018 by Larry Lohmann, The Corner House

Our colleague Larry Lohman stated in his opening:

Should we put a price on carbon? That depends on what our goals are and what we can expect prices to achieve.

If we’re looking for a solution to climate change, then putting a price on carbon isn’t a serious strategy. It can’t address the roots of the problem, and isn’t designed to.

However, if we’re driven less by concern over global warming than by incentives to try to help business muddle through a post-1970s profit crisis in an era of growing environmental regulation, then carbon pricing makes more sense.

In other words, deciding what to think about carbon pricing means deciding who you are and what side you’re on.

And in concluding Lohman said:

In sum, in reciprocally enmiring one another in a sucking swamp of economistic bullshit obligingly dug for them by various neoliberal expertocracies, business and the state have stumbled into a strikingly functional adaptive response to popular concern about climate change.9 Lamenting – as much to themselves as to others – that escape from their swamp is impossible, both capital and the state nonetheless try to console themselves that at least their antagonists in popular movements can’t easily get at them in their smelly refuge.

Are they right? Well, political realism does require us climate activists to acknowledge that carbon pricing – despite its ineffectiveness in addressing climate change – is not just another zombie shuffling interminably across the neoliberal policy landscape. There are good reasons for its continuing popularity among business, politicians and the experts that orbit them. These reasons must be fully understood if the rest of us are to move forward.

“People have to think more holistically about their actions. Everything comes down to ‘how much money can I make from this.’ Until this changes, all this talk of environmental protection is bullshit.” Cree Helen Atkinson in Whapmagoostui, Quebec, Canada 1993