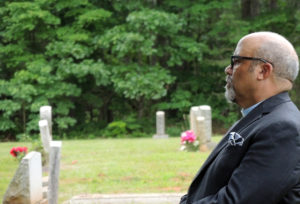 Union Hill Baptist Church’s Pastor Paul M. Wilson. The Pastor is organizing, along with Friends of Buckingham (County, VA), against the Atlantic Coast Pipeline and a 55,000 horsepower compressor station planned by Dominion Energy in the Union Hill community. There are freedmen cemeteries and unmarked slave burials on or near the site where Dominion wants to build its compressor station. If completed the pipeline’s purpose (on the books) is to deliver gas to markets in VA and NC with some discussion of expansion into SC. Photo: Orin Langelle

Union Hill is a historic Black community founded by descendants of freed slaves in Buckingham County west of Richmond. Local residents see the pipeline company’s disregard for their community as part of an established history of environmental racism in Virginia.

Please listen to the interview below: