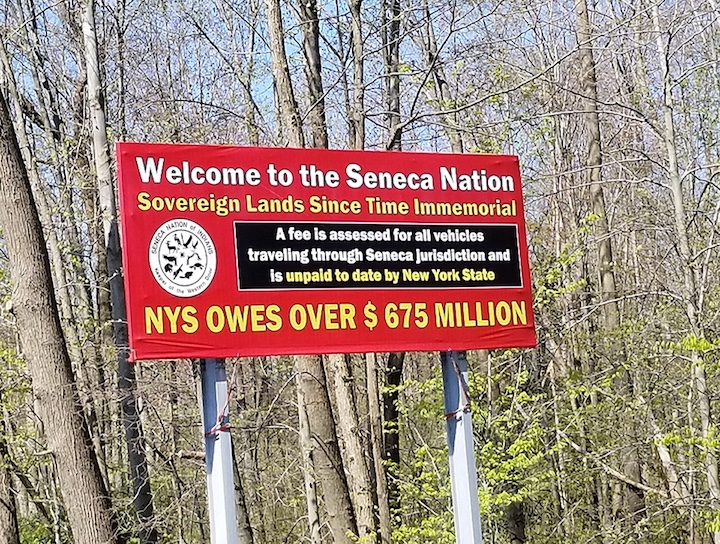 When driving from Buffalo, New York toward the Pennsylvania border (or vice versa), Interstate 90 cuts through the sovereign lands of the Seneca Nation of Indians. The Seneca Nation filed a lawsuit (04/11/18) in federal court regarding a deep-rooted conflict with New York State concerning the thruway which runs through the Seneca’s Cattaraugus Reservation. NY Governor Andrew Cuomo, the NY Attorney General, along with the Acting Commissioner of the NY State Department of Transportation, the Comptroller of NY State and the NY State Thruway Authority were named as the defendants in the lawsuit. The Seneca Nation maintain that the state broke federal laws more than 60 years ago when it built an almost three mile section of the I-90 through lands under Seneca jurisdiction. The nation originally sued the state over the issue in 1999. New York State is supposed to keep that section of highway maintained but apparently doesn’t.

I don’t know the last time that section of road saw new pavement. In my estimation, it is one of the worst sections of an of Interstate that I have ever seen. – Orin Langelle

Corporate Time Machine from the New York Times archives (A version of this article appears in print on July 17, 1992, on Page B00004 of the National edition with the headline: Senecas Clash With Police Over Tax Ruling):

Thirteen protesters were arrested and at least four state troopers were injured, including the force’s commander in western New York.

About 200 Indians began burning tires and other debris about 7 P.M. Wednesday to protest taxes the state wants to impose on the sale of gasoline and cigarettes at reservations…continued