Be realistic, ask for the impossible – slogan in Paris uprising, May 1968

To me it is very important to remember the events of May 1968 – not only in Paris but in the U.S. as well. Events that occurred fifty years ago were a glimmer of hope that strengthened an anti-war and anti-imperialist youth movement. This movement eventually helped bring other critical issues to the forefront including race, women’s rights, and the environment. For many reasons, there are no mass movements in the U.S. today that are as vibrant and militant as they were fifty years ago. The anti-corporate globalization movement from the 90s and early 2000s is still recuperating from the draconian police state in the U.S. that keeps intensifying as I type. While ‘Black Lives Matter’ provides another important glimmer of hope, most people today organize around single issues and do not incorporate a vision that unites all of the issues confronting us with a view addressing their common root causes. As a result, peoples all around the Earth suffer, the ecosystems and life support systems that enable life on Earth are further degraded, and climate chaos runs rampant.

Now is time to be realistic and demand the impossible. – Orin Langelle 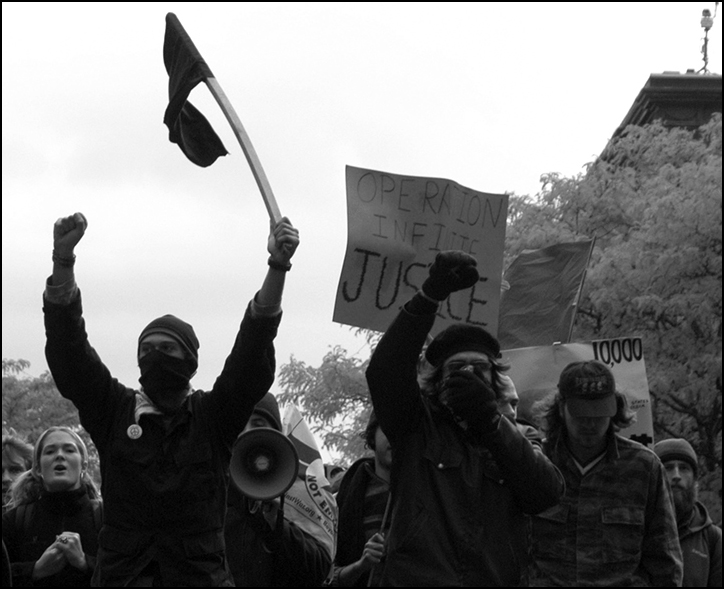 This photograph was taken on 3 November 2004, in the streets of Burlington, VT, U.S. Incumbent Republican President George W. Bush was named the winner of the presidential election that occurred one day earlier, defeating challenger John Kerry. Outraged over the election results, students and radical activists took over the streets all day and evening, causing traffic jams throughout the town. photo: Orin Langelle

Daniel Warner writes in his article From May 1968 to May 2018: Politics and Student Strikes for CounterPunch:

“For those who struck in 1968 at Columbia, Berkeley and Paris, just as for Martin Luther King Jr., there was a larger picture. King spoke of a society that was imperialistic at home and abroad. The lack of social justice in the United States, for King, was intertwined with America’s unjust foreign adventures. Student demonstrations in 1968 were against the university as part of a societal/political injustice. The university was a small manifestation of that injustice.

“I would hope that today’s French students, as well as students elsewhere, would be able to mobilize around other issues than university admissions and guaranteeing employment. There are more than enough issues to be outraged about today, and their solution requires the energy and determination of the young. That activism is what should be highlighted as the legacy of May 1968 and any comparisons with May 2018.”

The volatile period of civil unrest in France during May 1968 was punctuated by demonstrations and massive general strikes as well as the occupation of universities and factories across France. At the height of its fervor, it brought the entire economy of France to a virtual halt. The protests reached such a point that political leaders feared civil war or revolution; the national government itself momentarily ceased to function after President Charles de Gaulle secretly fled France for a few hours. The protests spurred an artistic movement, with songs, imaginative graffiti, posters, and slogans….

The unrest began with a series of student occupation protests against capitalism, consumerism, American imperialism and traditional institutions, values and order. It then spread to factories with strikes involving 11 million workers, more than 22% of the total population of France at the time, for two continuous weeks. The movement was characterized by its spontaneous and de-centralized wildcat disposition; this created contrast and sometimes even conflict between itself and the establishment, trade unions and workers’ parties. It was the largest general strike ever attempted in France, and the first nationwide wildcat general strike.

The student occupations and wildcat general strikes initiated across France were met with forceful confrontation by university administrators and police. The de Gaulle administration’s attempts to quell those strikes by police action only inflamed the situation further, leading to street battles with the police in Paris’s Latin Quarter, followed by the spread of general strikes and occupations throughout France.

“It’s terrifying to see that this is becoming the norm for riot police to be sent into universities,” said Guégan, who is doing a doctorate on representations of slavery in American cinema and teaches at the campus while studying at another university in Paris’s suburbs…

“If there’s one thing in common between 1968 and today, it’s young people’s despair,” he said. “But it’s a different kind of despair, because the social and economic context is not the same. In 1968, there was a global movement, there was rock music, new sexual freedom, a different culture and a desire to change the old world. Today’s youth is facing a moment of stagnation, with little to lean on, which makes the struggle harder.”

One of Gérard Guégan’s favourite slogans from May 1968 was “Be realistic, ask for the impossible”. He said: “We were constantly thinking of what we called dreams, and what could be called utopia … Everyone was convinced that something massive was happening.”

Note: The quote “Be realistic, ask for the impossible”, is one of Ernesto Che Guevara’s most most popular quotes. Che Guevara image (below) is a world wide symbol of resistance, especially in Latin America. 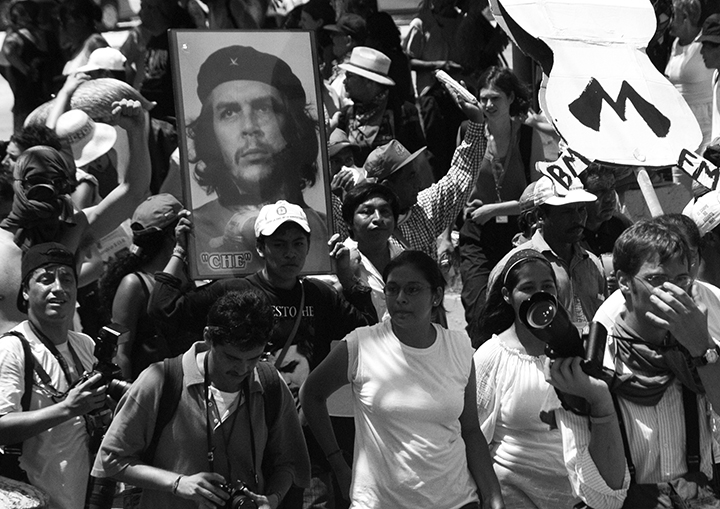 The 2003 march on the World Trade Organization meeting in Cancun, Mexico. When the march had to stop due to chainlink fences blocking the marchers from the WTO meetings, a South Korean farmer committed suicide. photo: Orin Langelle