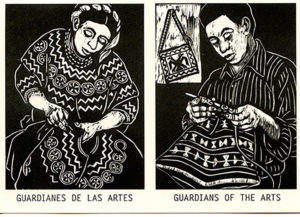 Amherst, NY, 26 October 2017–Artist and author Marilyn Anderson gave a presentation to the Weaver’s Guild of Buffalo at the Buffalo Niagara Heritage Village on her new book Guardianes de las artes / Guardians of the Arts.

Anderson states in her newest book that it “aims to foster a deeper appreciation for the beauty and history of Guatemalan arts…to inspire respect, empathy and support for Guatemalan artists and artisans.”

The book is illustrated by forty-three prints of her work, that were ten years in the making. Her prints illustrate long established Guatemalan arts and crafts techniques, and were inspired by traditional wood cuts and used some of the most ancient of printmaking techniques. They are organized into sections defined by fabrication techniques and raw materials.

Her involvement with the arts and crafts of Guatemala began in the 1960s and her fascination with the process of weavers and weaving. 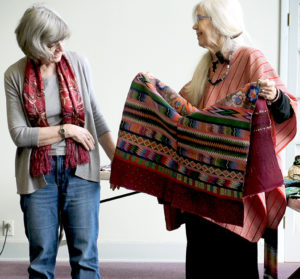 Carol Pirson (l) of the Weavers Guild of Buffalo, admires a weaving that Anderson is holding. photo: Langelle

Anderson’s talk for the Weaver’s Guild of Buffalo not only weaved a story of her learning from the people who were the artisans and how they work and the different types of processes involved, but her backstory of the history in Guatemala that shed light on the repression artisans and others lived through.

As a documentary photographer I found this history, in her talk, and in the “Supplementary Essays” at the end of her book, a fascinating and necessary historical look at what is so often forgotten – or not even known by many in the U.S. The information in Guardianes de las artes / Guardians of the Arts is a behind the scenes look at culture, Mayan arts, and change and ecology – plus a section on weaving and survival during La Violencia.

So why does art need guardians?

La Violencia: The 1954 coup d’état, which overthrew the democratically elected Guatemalan President Jacobo Árbenz, brought repression to the people. [OL Note: the coup d’état was a covert operation carried out by the U.S. Central Intelligence Agency (CIA).] The victims included trade unionists, leaders of cooperatives and peasants.  Armed resistance to the repression began in the 1960s. 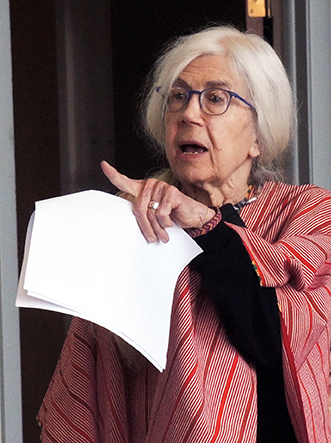 “Nearly 500 Guatemalan communities were destroyed. Maya women and men from areas designated by the army as ‘subversive’ did not wear their traditional clothing whose patterns and colors identified their ethnic group and community,” Anderson explained.

She continued, “Hundreds of thousands of Guatemalans fled and found their way to safety in Mexico [many in Chiapas refugee camps] or other countries, leaving behind property, houses and animals. Through forests and over rivers and mountains, many Maya refugee women carried their backstrap looms. Even if they left their looms behind, they carried within themselves the knowledge to build and use new ones.” 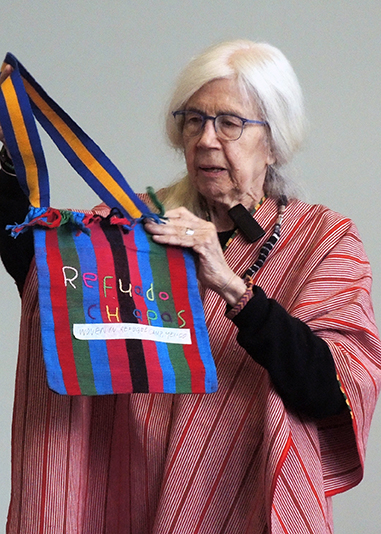 Men and boys crocheted shoulder bags. Anderson shows an example of that work made in a Chiapas, Mexico refugee camp. photo: Langelle

Ecology and Arts and Crafts: Anderson describes in her book that “Guatemalan arts and crafts are connected to their environment…An holistic relationship existed between the earth, which gave the raw materials for the objects that artisans made, and the users of these objects.”

I will never stop wearing my traditional clothing until the day I die. – Desidria Camposeco of Jacaltenango, 1996

Anderson says Desidria’s wearing traditional clothing is a form of resistance. A commitment to one’s culture plays a part of resisting economic and political forces and confronts prejudice and consumerism.

“Mayas keep their culture alive in many ways: millions speak, write and appreciate the 22 Mayan languages; they understand the universe; the world and humans’ place in it through their cosmovisión; the ancient K’iche’ creation narrative, The Popol Vub, has continued importance to modern day Mayas; story-telling music, dance and plays are other examples of traditional culture that play an important part in the lives of many Mayas.” – Marilyn Anderson

So why does art need guardians?

Because without art, cultural identity can be lost or worse, destroyed, threatening the very fabric of peoples’ true history. 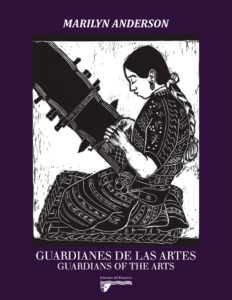 Completed in 2016, work on this book has occupied Marilyn over the past ten years. Copies are available in the United States through this website as well as several bookstores and online stores. The publisher, Editorial Ediciones Del Pensativo, is located in Antigua, Guatemala and makes the book available in bookstores in Guatemala.