Backstory of photo at the end of this post. 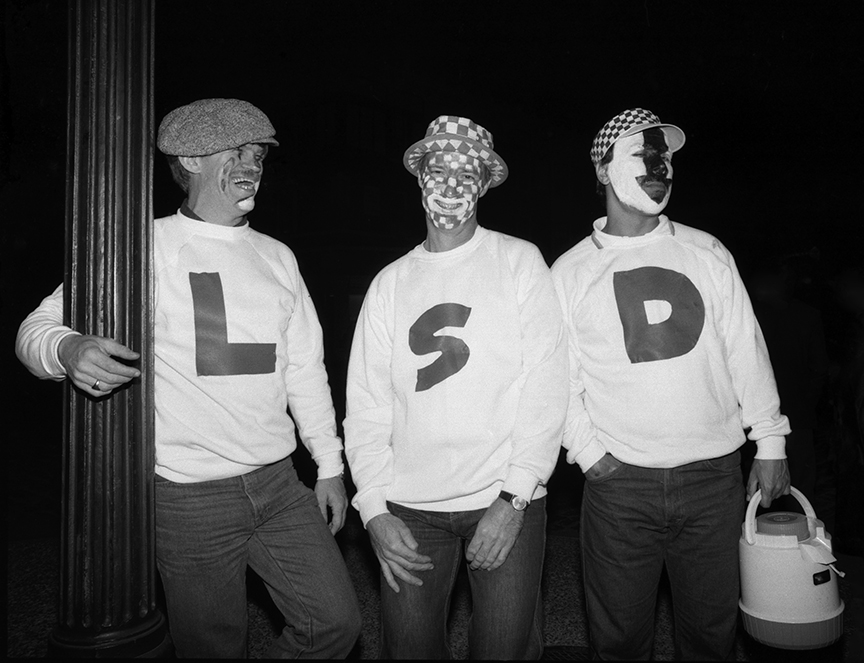 Another snippet of history. Happy Samhain!

[It’s Grace Slick’s birthday today. Jefferson Airplane’s Slick was invited to a tea party at the White House in 1969. She chose Yippie! Abbie Hoffman to be her escort and planned to spike President Richard Nixon’s tea with 600 micrograms of LSD. The plan was thwarted.]

Lysergic acid diethylamide (LSD), also known as acid, is a psychedelic drug known for its psychological effects. This may include altered awareness of the surroundings, perceptions, and feelings as well as sensations and images that seem real though they are not. It is used mainly as a recreational drug and for spiritual reasons.

Timothy Francis Leary (October 22, 1920 – May 31, 1996) was an American psychologist and writer known for advocating the exploration of the therapeutic potential of psychedelic drugs under controlled conditions. Leary conducted experiments under the Harvard Psilocybin Project during American legality of LSD and psilocybin, resulting in the Concord Prison Experiment and the Marsh Chapel Experiment. Leary’s colleague, Richard Alpert (Ram Dass), was fired from Harvard University on May 27, 1963 for giving psilocybin to an undergraduate student. Leary was planning to leave Harvard when his teaching contract expired in June, the following month. He was fired, for “failure to keep classroom appointments”, with his pay docked on April 30. National illumination as to the effects of psychedelics did not occur until after the Harvard scandal.

On December 26, 1968, Leary was arrested again in Laguna Beach, California, this time for the possession of two marijuana “roaches”. Leary alleged that they were planted by the arresting officer, but was convicted of the crime. On May 19, 1969, The Supreme Court concurred with Leary in Leary v. United States, declared the Marihuana Tax Act unconstitutional, and overturned his 1965 conviction.

On that same day, Leary announced his candidacy for Governor of California against the Republican incumbent, Ronald Reagan. His campaign slogan was “Come together, join the party.” On June 1, 1969, Leary joined John Lennon and Yoko Ono at their Montreal Bed-In, and Lennon subsequently wrote Leary a campaign song called “Come Together”.

On January 21, 1970, Leary received a 10-year sentence for his 1968 offense, with a further 10 added later while in custody for a prior arrest in 1965, for a total of 20 years to be served consecutively. On his arrival in prison, he was given psychological tests used to assign inmates to appropriate work details. Having designed some of these tests himself (including the “Leary Interpersonal Behavior Inventory”), Leary answered them in such a way that he seemed to be a very conforming, conventional person with a great interest in forestry and gardening. As a result, he was assigned to work as a gardener in a lower-security prison from which he escaped in September 1970, saying that his non-violent escape was a humorous prank and leaving a challenging note for the authorities to find after he was gone.

For a fee of $25,000, paid by The Brotherhood of Eternal Love, the Weathermen smuggled Leary out of prison in a pickup truck. The truck met Leary after he’d escaped over the prison wall by climbing along a telephone wire. The Weathermen then helped both Leary and Rosemary out of the US (and eventually into Algeria).

The backstory of the above photograph: Talented artist and friend, Patrick Brown and I did a lot of art and other stuff together from the 70s through the 80s. We almost went into business together. The above photo photo was actually part of a documentary we were working on, and commercially we thought were going to make some of the STREET PHOTOGRAPHS taken in St. Louis’ Central West End in 1983 on Halloween night into a calendar –  We certainly had enough strange photos. But the calendar unfortunately never happened. I don’t think we had enough money to put up front and certainly had no backers. We jokingly (?) called our our enterprise “nervous energy arts.”