History is a weapon – lest we forget

On 12 October 1492 Columbus stumbled into the Americas. In his People’s History of the United States, Howard Zinn writes of Columbus’ arrival:

Arawak men and women, naked, tawny, and full of wonder, emerged from their villages onto the island’s beaches and swam out to get a closer look at the strange big boat. When Columbus and his sailors came ashore, carrying swords, speaking oddly, the Arawaks ran to greet them, brought them food, water, gifts. He later wrote of this in his log:

They … brought us parrots and balls of cotton and spears and many other things, which they exchanged for the glass beads and hawks’ bells. They willingly traded everything they owned… . They were well-built, with good bodies and handsome features…. They do not bear arms, and do not know them, for I showed them a sword, they took it by the edge and cut themselves out of ignorance. They have no iron. Their spears are made of cane… . They would make fine servants…. With fifty men we could subjugate them all and make them do whatever we want. 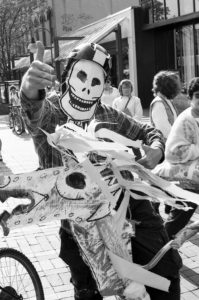 ABOUT THE ALARM COVER…
This photo was taken at an Earth First! rally and celebration of 500 years of indigenous resistance. Featured is Death riding atop his trusty stead during a takeover of the Burlington Church Street Marketplace and a disruption of the Columbus Day sales happening there. The outstretched hand of death signifies the continuation of the ecological devastation and genocide of native peoples that are soon to lead to the collapse of planet Earth.      Photo: Langelle

What follows occurred twenty-five years ago in October 1992 when I was living in Burlington, VT. This was the 500th year of the beginning of the colonization and genocide against the Indigenous Peoples of the Americas. The images and many excerpts are from the 5th issue of the ALARM, a quarterly Northeast Earth First! newsletter (original cover and the article at the end of post). All copy is excerpted from this issue and some thoughts may not be politically correct to 2017 standards. – Orin Langelle

Montpelier, Vermont –  Earth First!, Central Vermont Greens and the All-Species Project joined with representatives of the Abenaki, Cree and Mi’kmaq in front of the Vermont Supreme Court in Montpelier to commemorate the resistance and survival of Native Americans since the arrival of Columbus. People were gathered to protest the VT Supreme Court’s recent decision denying the ancestral rights of VT’s indigenous Abenaki, whom stated they lost these rights “due to the increasing weight of history…”

A wigwam was set up close to the steps of the Supreme Court building and a traditional pipe ceremony followed. After a speak-out, hundreds of pounds of sand bags were carried up to the doors of the Supreme Court’s courtroom and those in session were effectively barricaded into their Chambers. Spokesperson Carrie Bioux stated, This was a demonstration to these arrogant bastards of the increasing weight of our resistance.”

Earlier that year, the same Court denied the indigenous Cree’s appeal of the VT contract with Hydro-Quebec. This contract allowed Vermont utilities to buy four billion dollars worth of hydro-electric power from HQ while “washing their hands” of any responsibility for destroying Cree, Inuit, and Innu lifestyles or for the devastation of the James Bay bioregion caused by the construction of the massive La Grande hydroelectric dam project on indigenous land near James Bay, Quebec [which included the “accidental” drowning of 10,000 caribou when water was released from the dam during a migration].

12 October 1992     One arrest; Traffic Blockaded Near Hydro-Project As Protesters Oppose the Columbus Myth and Genocide

Winooski, Vermont – Following the racist decisions of the Vermont Supreme Court, in commemoration of the 500th anniversary of the Columbus invasion and in solidarity with the Abenaki and the indigenous peoples of James Bay, Earth First! rallied next to the Winooski-One hydro project, under construction in Winooski, Vermont. Winooski-One owner, John Warshaw denied the comparison of himself to Columbus stating there are no indigenous people [in Vermont]. Ironically, Winooski is an Abenaki term meaning “Land where the onions grow.” After the rally, Earth First!ers blocked traffic on the Winooski-Burlington Bridge adjacent to the construction, causing a major traffic jam of Columbus Day Shoppers. 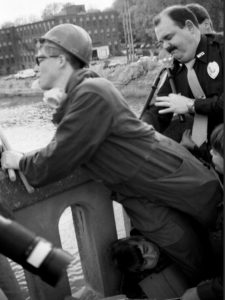 Anne Petermann (bottom center) with her head on the ground being protected by a protester as a cop (top right) prepares to use numchuks on her in a compliance hold. Photo: Langelle

With the traffic at a standstill, one of the blockaded drivers, off-duty police officer Michael Schirling, lunged his car forward in an attempt to force protesters out of the way. When he screeched to a halt, nearly missing one protester, he leapt out of his car and began flashing his Cop ID ordering people out of the road or be arrested. He then arrested Anne Petermann who was standing on the sidewalk exercising Her First Amendment rights…EF!ers went to her rescue to try and prevent [the cops from taking her to jail]. One cuff was put on Petemann, by now on the ground, but the crowd refused to let her be dragged to the police car. Finally numchucks were used by one cop to attempt to force her compliance. During the melee, Schirling’s wallet mysteriously parted from his body and dove into the Winooski River.  Petermann was later released after being charged with reckless endangerment for refusing to leave the road even though she was arrested on the sidewalk…

Addendum: This was Anne Petermann’s first arrest and she opted for a court trial. Police officers along with Michael Schirling and his fiancee provided conflicting and false information, but Petermann was found guilty. Petermann now lives in Buffalo, NY and has continued organizing to protect forests and working in solidarity with Indigenous Peoples for over a quarter of a century – from the United Nations to the South American rainforests. She is the Executive Director of Global Justice Ecology Project. 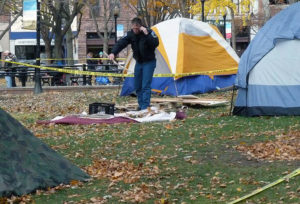 Burlington Police Chief Michael Schirling in the shut down Occupy Burlington encampment dismantling parts of the camp prior to the official investigation.
Photo: Langelle

Michael Schirling went on to become Burlington, VT’s Police Chief. During the nationwide Occupy Movement in 2011, a young veteran in the Burlington Occupy camp shot and killed himself. After this tragedy, Occupy protesters were persuaded to come into City Hall to talk about the incident. While they were inside, Schirling ordered the Occupy encampment to be sealed off in police tape. He then proceeded to destroy evidence in the camp before the detective assigned to the case could investigate what had happened.

The Indigenous Peoples of the Americas and globally are under ever greater threat by governments and corporations as the Earth’s “resources” are running out for the materialistic consumer culture of industrialized countries. The struggle for the land continues as Indigenous Peoples continue to claim their sovereignty. Much of the resources left are in/on indigenous territory. Their land is not respected and is only to be used for extraction or trespass, as recently witnessed with the North Dakota Access Pipeline. There is resistance in many places, with the most visible in the U.S. at the Standing Rock encampment…but again the government broke its promise to the Indigenous Peoples there. But resistance to those who destroy the Earth for their own profit is an inspiration…it was and still is from the Zapatista uprising in Chiapas, Mexico in 1994. 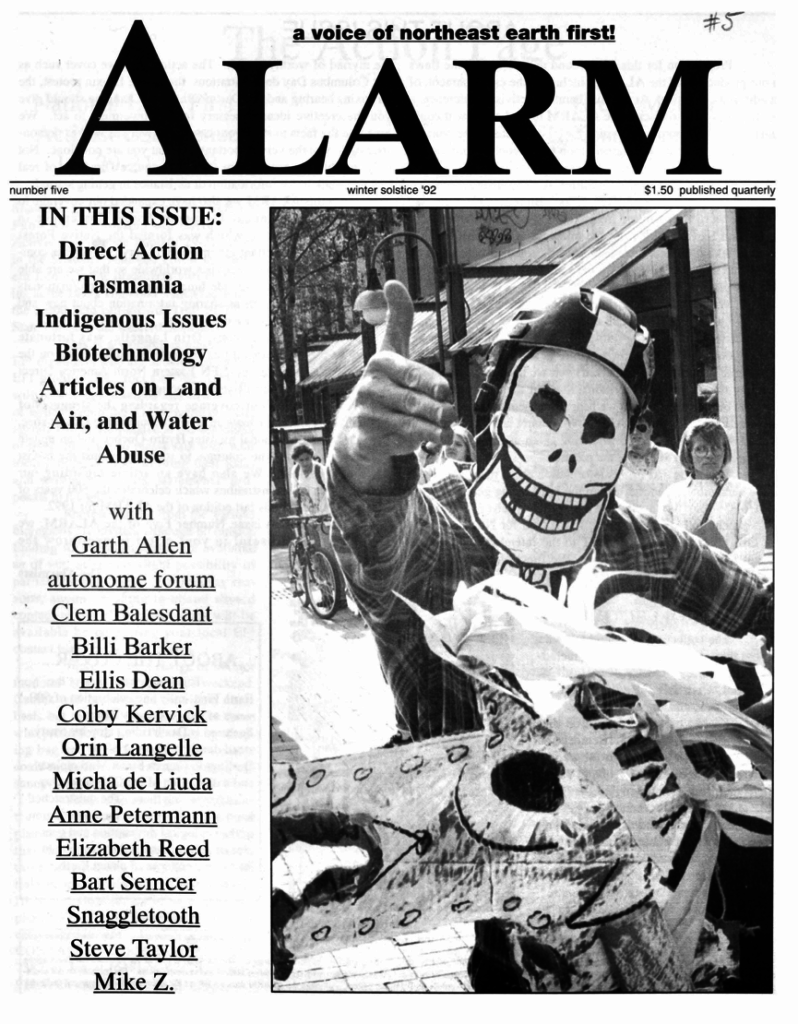 Page 6 of the ALARM 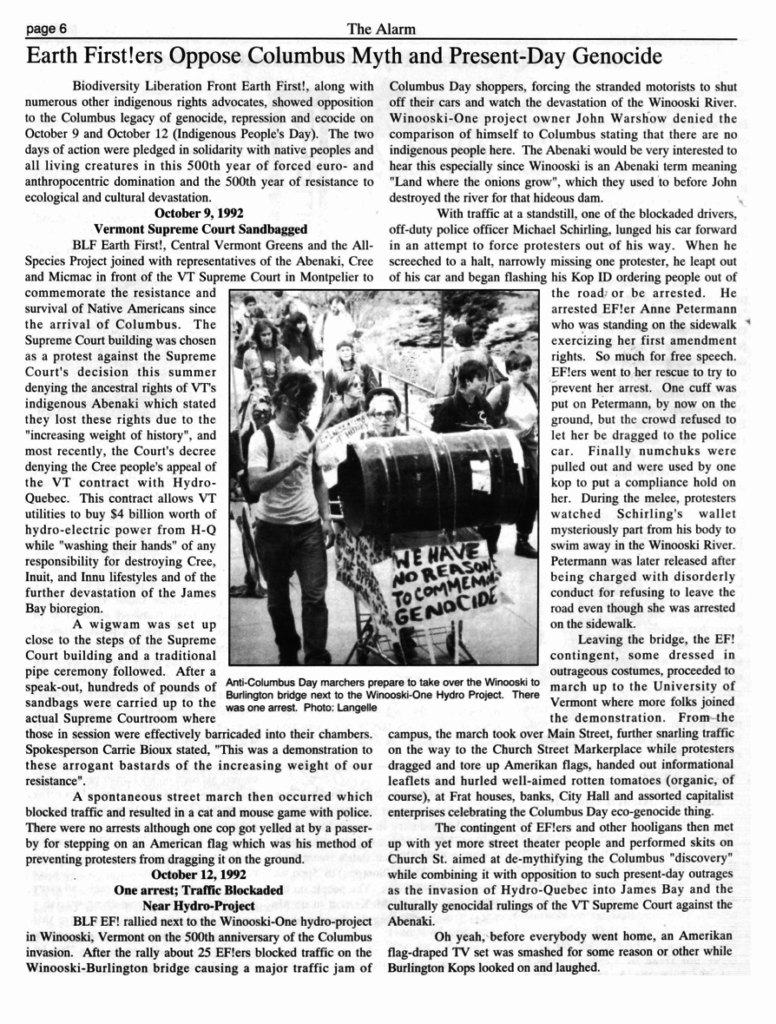 [Special thanks to friend and colleague, Bron Taylor, by making sure movement writings are secured as history.]