I remember the day I took this photo well. Twenty years ago. On Friday 15 September the probe will be no more. I firmly am against all kinds of stupidity and putting nukes in spaces is insane – in fact anything nuclear is. Look what is still happening in Fukushima, Japan…  – Orin Langelle 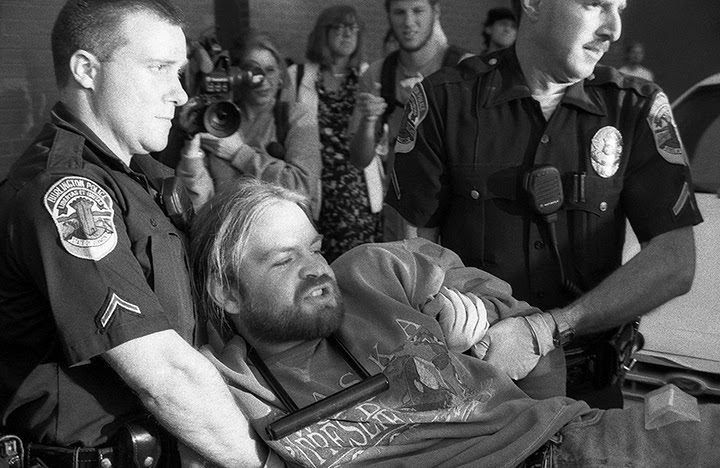 Photo by Orin Langelle. Protester being arrested after locking down to U.S. Senator James Jeffords’ desk, in Burlington, VT to protest the Cassini space launch. (1997)

On Friday, NASA’s Cassini spacecraft, used to take pictures of Saturn for nearly 20 years, will thrust towards Saturn’s atmosphere and burn up. NASA made the decision to kill off Cassini amidst concerns that the bus sized structure could contaminate Saturn’s moons.

The photo featured here, taken by Global Justice Ecology Project’s Orin Langelle, shows a Cassini protester being arrested in Burlington, Vermont back in October of 1997. The Cassini rocket was launched with 72 pounds of plutonium — the most ever rocketed into space.

Cassini’s opponents point to the track record of past space missions involving radioactive payloads: Three of 23 such U.S. missions have failed, including the immortalized Apollo 13 lunar mission. NASA notes that in all cases, the nuclear-powered RTGs remained intact.

But Russia hasn’t been so lucky. Six of Russia’s 39 nuclear space missions have failed — just last November, the Russian Mars ’96 spacecraft malfunctioned shortly after launch and hurtled back to Earth. Debris from the craft, including a RTG with a half-pound of plutonium, may have fallen over a wide swath of Chile and Bolivia.

Protesters pointed out that if the rocket exploded on takeoff, or crashed into the Earth, it could permanently irradiate the planet.

Eleven people were arrested when they protested the Cassini launch by carrying 72 lbs. of cow manure into the office of U.S. Senator James Jeffords, a Republican. The protesters chained themselves by the neck to his desk with bike locks. The Burlington Fire Department had to cut the desk apart to remove the demonstrators. There were demonstrations across the U.S. including at Cape Canaveral, the launch site.