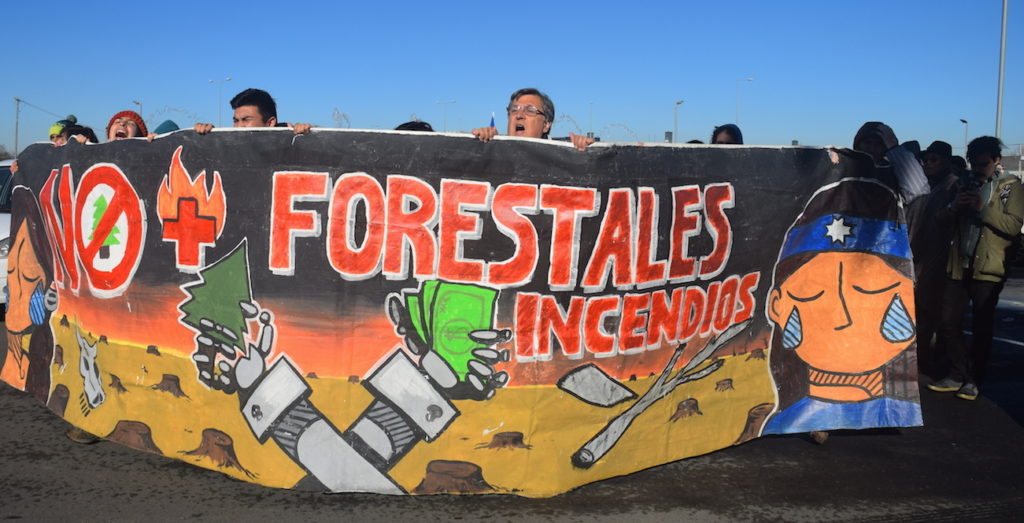 Concepción, Chile – People from Chile representing social movements, Indigenous organizations and environmental justice groups marched to the International Union of Forest Research Organizations (IUFRO) 2017 Tree Biotechnology Conference on its opening day here. They were stopped outside of the conference by the Carabinero police forces. There were no arrests.

The protests occurred simultaneous to the first session of the IUFRO conference, “Chilean Forestry and Adoption of New Technologies,” hosted by the Chilean Forest Association (CORMA) and Arauco, one of the two largest forestry companies in the country.

The Campaign to STOP Genetically Engineered Trees [1] is in Concepción to monitor the conference sessions and to be in solidarity with groups organizing a week of counter-conference activities in the city [2]. The Campaign is posting news and photos from the week of events on its Chile Blog.

The IUFRO conference being targeted due to its promotion of genetically engineered (GE) trees [3] and the advancement of the Chilean forestry model, which includes vast monoculture plantations of pine and eucalyptus trees. 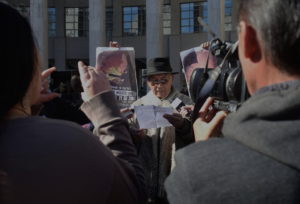 At the public declaration At the declaration against the Chilean forestry model. Photo: Langelle

(Left) A public declaration against the Chilean forestry model was issued today by social movements of the Chilean and Mapuche peoples, stating that, “Ending the prevailing forest model is a matter of life or death. We must put an end to the harmful effects of monoculture forestry: the ongoing water crisis, degradation of arable land, urban and rural poverty, loss of native forest, wetlands, ecosystems and the proliferation of forest fires.”

Anne Petermann, International Coordinator for the Campaign to STOP GE Trees stated, “Chile’s forestry model, advanced under the Pinochet dictatorship, has already resulted in wide ranging impacts.  It has displaced Mapuche communities from their ancestral lands, driving many communities into poverty and depleting their fresh water supply.” Additionally Peterman said, “Monoculture tree plantations devastated by insect infestation are also blamed for the worst wildfire season in the country’s history and many members of communities wiped out by the fires insist that the timber companies set fire to their own insect-damaged plantations to collect the insurance money.”

[2] The week of counter-conference activities is hosted by the Coordination for the Defense of the Territories, and the Movement for Water and the Territories.

[3] The entire day on Wednesday and portions of other days at the conference are devoted to advancements in the commercialization of genetically engineered trees.