If you have trouble opening these photos in Safari, please use another browser – thanks – OL 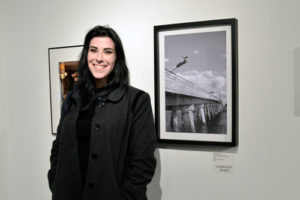 Both Langelle and Dilenno will have a solo exhibit at the CEPA Gallery in 2018. CEPA Gallery’s 2017 Members’ Exhibition features the photography and photo-related work of some of Western New York’s most talented artists. 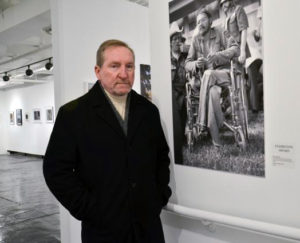 Langelle is the Director of the ¡Buen Vivir! Gallery for Contemporary Art and Langelle Photography in Buffalo, NY. Langelle also serves as the Strategic Communications Director of Global Justice Ecology Project.

Orin Langelle is a concerned photographer, who for four decades has been documenting social and environmental struggles.

Since 1972 Langelle has documented peoples’ resistance to war, corporate globalization, ecological destruction and human rights abuses. His first photographic assignment was to cover the protests against the Vietnam War at the 1972 Republican National Convention in Miami Beach. Langelle’s Exhibition Award photograph was from that first assignment (below). 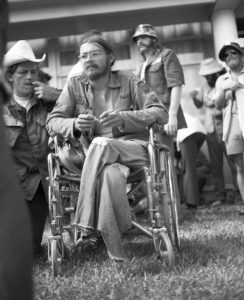 Republican National Convention—Miami Beach, FL 1972 – Wounded soldier from Vietnam Veterans Against the War (VVAW) in a wheelchair during protests against the RNC. Photo: Langelle

Langelle says, “I approach my role as concerned photographer by not merely documenting the struggle for social and ecological justice, but by being an active part of it. This has enabled me to garner the trust of many of the subjects I have documented, allowing me access that would not have been possible otherwise. In this way, I have been able to expose the truth that is so often hidden by the powers of injustice.”

He continues, “My work is an historical look at social movements, struggle and everyday life.  It is designed to counter the societal amnesia from which we collectively suffer—especially with regard to the history of social and ecological struggles. This is not merely a chronicling of history, but a call out to inspire new generations to participate in the making of a new history.  For there has been no time when such a call has been so badly needed.”

When asked about her Exhibit Award photo, Natalie Dilenno says, “I’ve been studying Yves Kline and appropriated that image because he influences my work so much.”

She continued, “I’ve been making blue artworks recently, so he’s been a major reference for the blue and his concepts that deal with the notion of the ‘void’. A whole. That image is just a more literal explanation of this idea than his blue paintings (and my blue abstract photographs).”

[Note]: Many in the art world consider Yves Klein the most influential, prominent, and controversial French artist to emerge in the 1950s. He is remembered above all for his use of a single color, the rich shade of ultramarine that he made his own: International Klein Blue. Klein (1928 – 1962) said, “The imagination is the vehicle of sensibility. Transported by the imagination, we attain life, life itself, which is absolute art.”

More about CEPA after the current exhibits:

Other Exhibits that Opened January 27 at CEPA 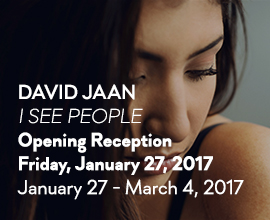 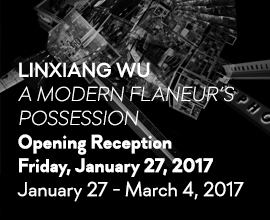 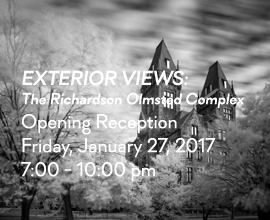 Originally incorporated as the Center for Exploratory and Perceptual Art to serve as a community darkroom and exhibition space, CEPA Gallery was founded during the Alternative Space Movement in May 1974 by recent graduates of the University of Buffalo.

Throughout its history, CEPA has strived to reflect the creative priorities for working artists, while growing to accommodate the educational and social needs of Western New York’s diverse community. Over the years, CEPA has evolved into a nationally recognized arts center that is truly international in scope, but regional in spirit. It is now one of the oldest and largest not-for-profit photography-based arts centers in the United States.

CEPA remains dedicated to photography and the photo-related and electronic arts, and has developed its programs and opportunities to provide working artists, urban youth, and other individuals with the necessary programs and facilities for the production and reception of contemporary art.