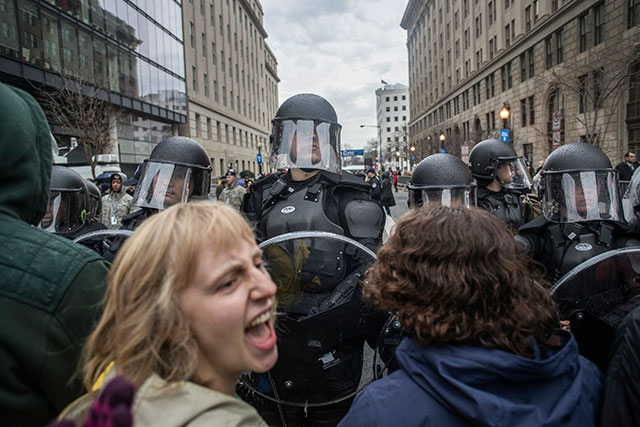 Police stare down protesters attempting to block an entrance to the National Mall as they rally against the inauguration of Donald Trump as the nation’s 45th president, in Washington, DC, on January 20, 2017. Among those arrested are at least six media workers covering the protest, who are currently facing felony charges despite lack of individualized probable cause. (Photo: Victor J. Blue / The New York Times)

As members of the media, we are appalled by the felony charges that have been brought against journalists arrested on January 20, 2017 while covering protests in Washington, DC, surrounding the inauguration of Donald Trump.

According to the National Lawyers Guild (NLG):

“[T]he Metropolitan Police Department (MPD) unlawfully detained and arrested 222 protesters, bystanders, journalists, and NLG Legal Observers while subjecting them to chemical weapons including tear gas and pepper spray. This violated § 5–331.07, which prohibits kettling and mass arrests and requires police to give dispersal warnings. Despite the media’s focus on isolated incidents of property destruction, MPD indiscriminately targeted people for arrest en masse based on location alone.”

Any unlawful detention and arrest should be condemned. The arrest of journalists, in particular, has a chilling effect on free speech and a free press, at a time when the new White House administration has openly declared itself to be in a “running war” with any critical media.

Other treatment described by the NLG is also to be condemned:

“Police held arrestees at 12th and L St. NW for hours, denying basic needs such as treatment for injuries, water, and access to bathrooms. Police then pepper sprayed, tear gassed and subjected other protesters to concussion grenades without warning, including the elderly, people with disabilities, and children. Most were held overnight, and all were eventually charged with the felony of inciting a riot, despite a lack of individualized probable cause. In addition, phones and other belongings were confiscated by police as evidence, with many protesters only having their wallets returned.  If convicted, the protesters face up to ten years of incarceration and a fine of $25,000.”

At least six media workers are among those facing a felony charge, up to 10 years in prison and a $25,000 fine.

We believe it is essential that journalists and members of the media be able to cover protests, including disruptive protests that may involve property damage, without risk of arrest and charge simply for being in the “wrong place at the wrong time.”

Our support for these journalists is unequivocal, and we demand that DC authorities drop all charges against them immediately. We condemn this blatant criminalization of journalism and will resist all efforts to control the press.

If you are a journalist or other member of the media who would like to add your name to this statement, please email: [email protected]
For more information:

Copyright, Truthout. May not be reprinted without permission.