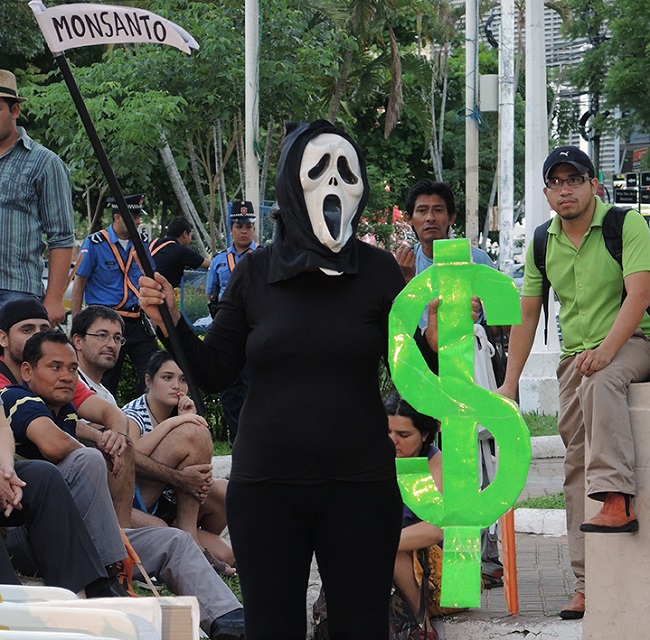 A skit during a protest in Paraguay condemns Monsanto’s greed. GMOs and agrotoxins have degraded fertile lands and caused loss of biodiversity across the country. Photo: Orin Langelle, Asunción, Paraguay (2014). GFC/PhotoLangelle.org

Despite the dark, deadly past of chemical giants Monsanto and Bayer, a proposed merger between them is expected to be approved, despite a pattern of international war crimes and a trail of dead bodies.

This was originally published in Toward Freedom on 23 December 2016.

The authors Ruddy Turnstone and Carolyn Lansom work for Global Justice Ecology Project and Theresa Ipolito co-wrote this piece as a volunteer for GJEP.  You can find their bios at the bottom of this post.   Orin Langelle, GJEP’s Strategic Communications Director, was interviewed for this post.  Langelle’s father was killed by PCB poisoning after Monsanto covered up its deadly impacts for many years.

Bayer and Monsanto are negotiating a possible merger, which would make them one of the biggest, most dangerous companies on the planet.  This article explores the companies’ shocking histories and the possible impacts of such a merger. 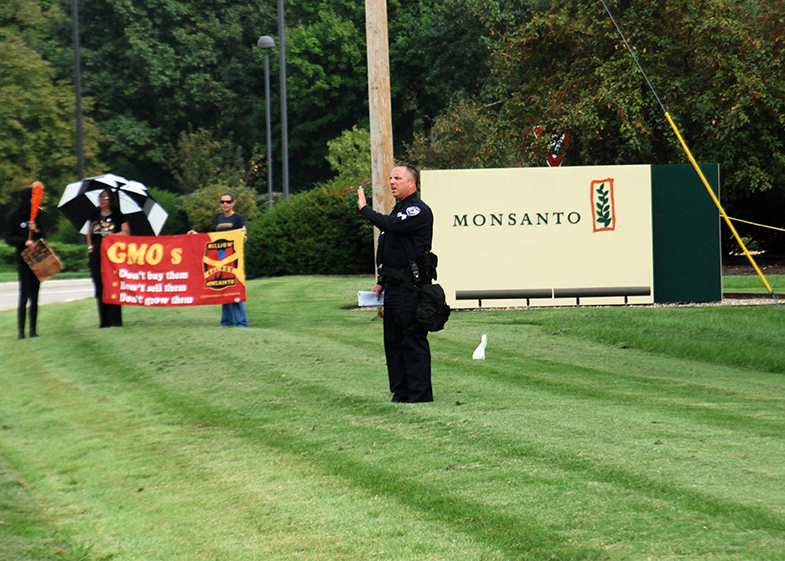 Policeman waves away some of the hundreds of demonstrators who descended on the entrance to Monsanto’s world headquarters in the United States near St. Louis, MO. Photo: Orin Langelle, Creve Coeur, MO (2012) GJEP/PhotoLangelle.org

On December 8th 2016, the State of Washington’s Attorney General office filed a lawsuit against Monsanto for contaminating rivers, land, air, people and wildlife. 120 bodies of water in Washington were named as suffering from PCB contamination. This recklessness by Monsanto comes at no surprise and is a glimpse as what to expect if the Bayer-Monsanto merger is completed.

From Bayer’s systematic killing of and forced-testing on people in Nazi Germany, to their preventable spread of HIV to thousands, and Monsanto’s deadly development of Agent Orange, PCBs and dioxin, this merger would mark a dangerous new precedent for the biotechnology/biochemical industry if approved.

Together, these two corporations have been responsible for the suffering, torture and deaths of millions.  Communities, organizations, small farmers and social movements are working to resist these corporations, and have made a resounding rejection of their merger. 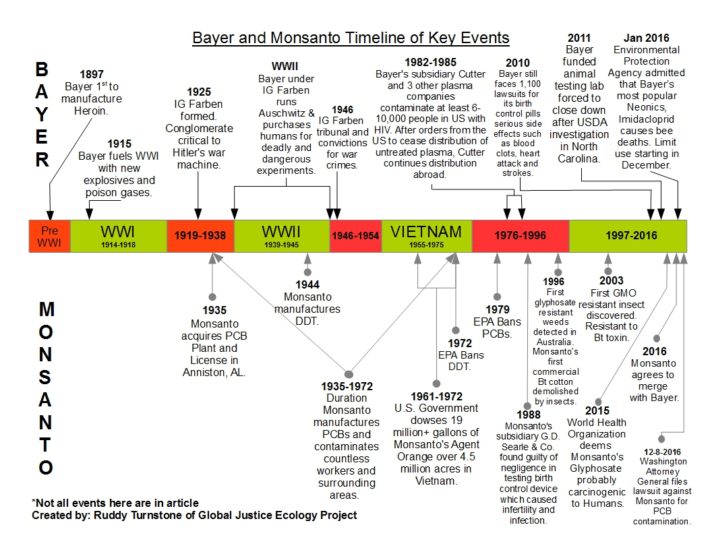 Bayer, based in Germany, became famous for producing the headache-relieving drug Aspirin in 1899. In 1897, heroin also gained traction with the public, as Bayer was the first to commercially manufacture it. Bayer coined it “Heroin” for the “Heroic” effects upon its first volunteers – Bayer’s very own factory workers. Bayer marketed Heroin as a drinkable health tonic and a remedy for coughing fits. Today, heroin is a key player in the drug abuse epidemic (1).

The first well-documented incident of Monsanto’s disregard for human health, originated with the manufacturing of polychlorinated biphenyls (PCBs). In 1935, Monsanto purchased the Swann company to sell PCBs used to make coolant fluids and as components for electrical transformers and motors. Monsanto contracted licenses to manufacture PCBs in the US and internationally, including to Bayer in Germany. In 1979, the Environmental Protection Agency (EPA) banned the manufacture of PCBs, ruling that they caused cancer in humans and animals.

“In 1957, Monsanto considered the chemicals toxic enough to give workers protective gear and clothing, and encourage them to hose off after each shift. Monsanto researchers and executives began writing confidential memos describing their fears about the chemicals’ toxic effects, but drafted plans for continuing to sell them despite these suspicions.”

Monsanto and other companies exchanged information about the impacts PCBs had on workers, but decided profit was more important.

Orin Langelle, photojournalist and co-founder of Global Justice Ecology Project explains what Monsanto’s actions meant to workers and their families: “My father worked at Wagner Electric in Wellston, Missouri as a journeyman machinist. He worked around transformers that used PCBs as insulating oil. In 1980 he died of malignant melanoma, which PCBs cause. Other workers in his section of the factory died as well and Wagner quickly closed its doors. It wasn’t until years later that the families of the dead workers put it together that all of these deaths were connected to Wagner’s use of PCBs, but Wagner was long gone by then. This was devastating to the families.”

“But it also left behind a legacy of toxic waste. PCBs (polychlorinated biphenyls) were discovered on the site, and although Wagner ultimately paid St. Louis County $2 million, the site remained contaminated.”

Langelle stated, “I will always hold Monsanto responsible for my father’s death as those bastards at Monsanto knew the risks posed to workers for many years, but corporate profits were more important than workers, so they just let the workers go on dying.”

To read the entire article, visit Toward Freedom

Biographies of the Authors

Theresa Ipolito has a masters degree in Environmental Policy and Sustainability Management. Her areas of research include primate behavior, natural resource management, and environmental health.

Carolyn Lansom – With a BFA in Theater Performance and BA in English this outdoor enthusiast is happy that her experiences brought her to work with the Global Justice Ecology Project in early 2016. Having traveled extensively in Asia post-college she is motivated to help in any way she can to bring forward environmental issues to the public eye.

The above article was also posted by Global Justice Ecology Project on 23 December 2016. 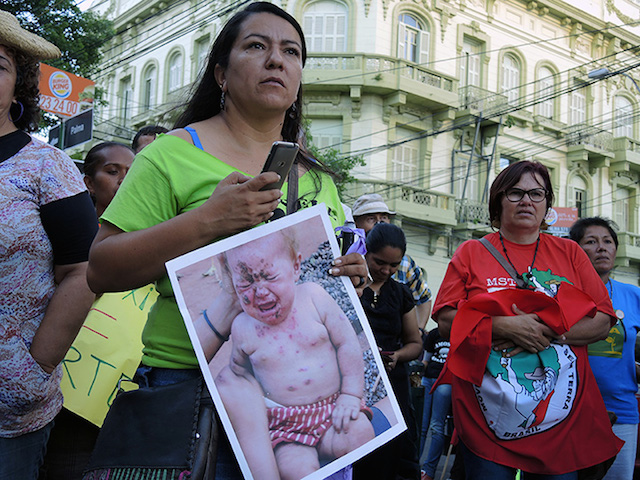 Woman holding photo of baby whose condition is blamed on the dumping of agrotoxins is is shown during a rally in Asunción, Paraguay, 3 December 2014. GFC/PhotoLangelle.org