Buffalo, NY–Chief Arvol Looking Horse spoke on the peaceful encampment in Standing Rock, where thousands of Water Protectors are gathered to stop the Dakota Access Pipeline. A press conference was followed by a talk attended by over 200 people on November 28, 2016 at the Network of Religious Communities in Buffalo, NY. 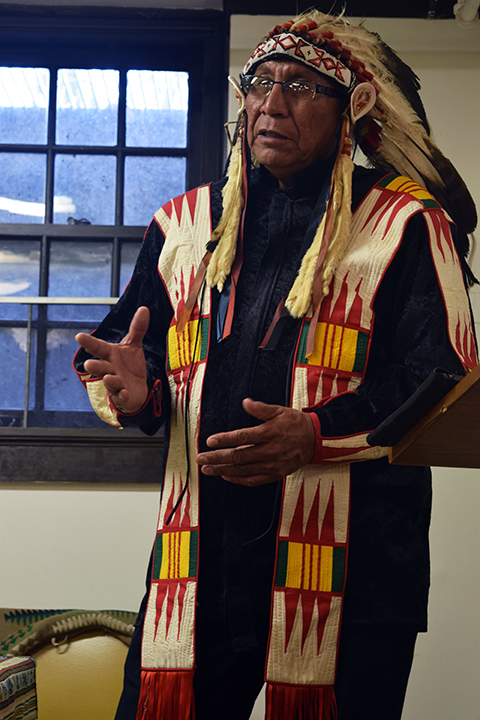 The Water Protectors and allies are withstanding concussion grenades, water cannons, tear gas, rubber bullets, and the onslaughts of the militarized police and security forces.

Speaking with Spiritual Leader Arvol Looking Horse were Agnes Williams from the Seneca Nation Cattaraugus Reservation and the Indigenous Women’s Initiative, and Dawn Martin-Hill, a Professor and Academic Director of the Indigenous Studies Program at McMaster University, from the Mohawk Six Nations Wolf Clan. 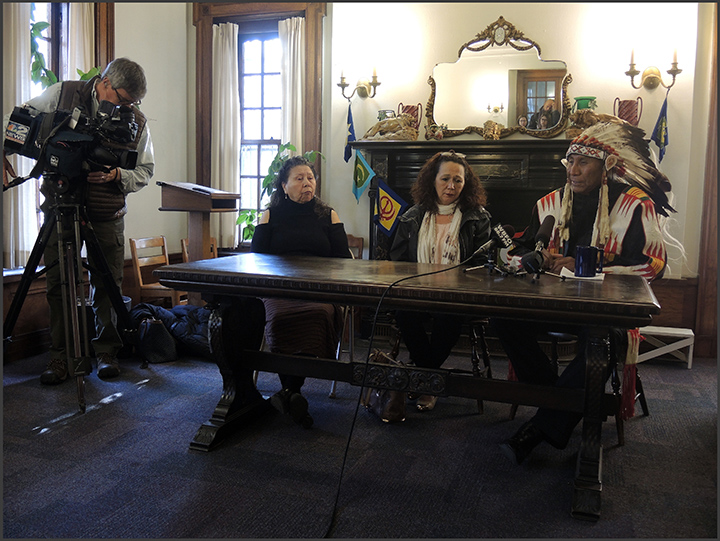 The comments below were compiled primarily from the remarks by Chief Arvol Looking Horse, with added information from Dawn Martin-Hill and Agnes Williams.

There is a Lakota prophecy that says there will be a great black snake that will run through the land and bring destruction to the people and to the earth. Native people from all across the United States are gathering peacefully to protect the earth and water from that black snake, which is the Dakota Access Pipeline.

As of last count, the camp at Standing Rock included over 15,000 people. More than 300 flags of different indigenous nations are flying there. The camp is a peaceful and prayerful camp where people join together in ceremony and prayer every day. They are Water Protectors. 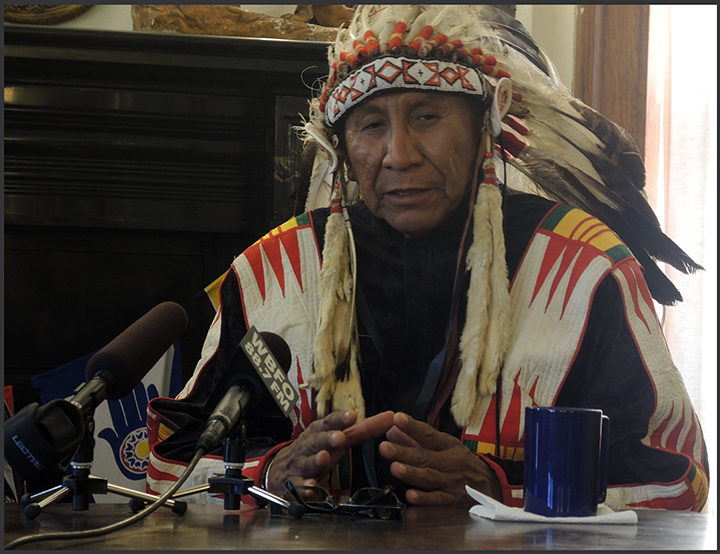 On December 5th, a delegation of more than 2,000 military veterans is expected to join the camp to help defend the water protectors from attacks by the National Guard and police in anticipation of a forced eviction following a decision by the Army Corps of Engineers that makes staying on the land of the camp illegal.

This country was supposed to have been founded on freedom of religion. Plus we signed treaties—the government is supposed to honor the treaties. In 1851 the first treaty–the Fort Laramie Treaty which includes the land where the camp is–was made using a sacred pipe and bible. 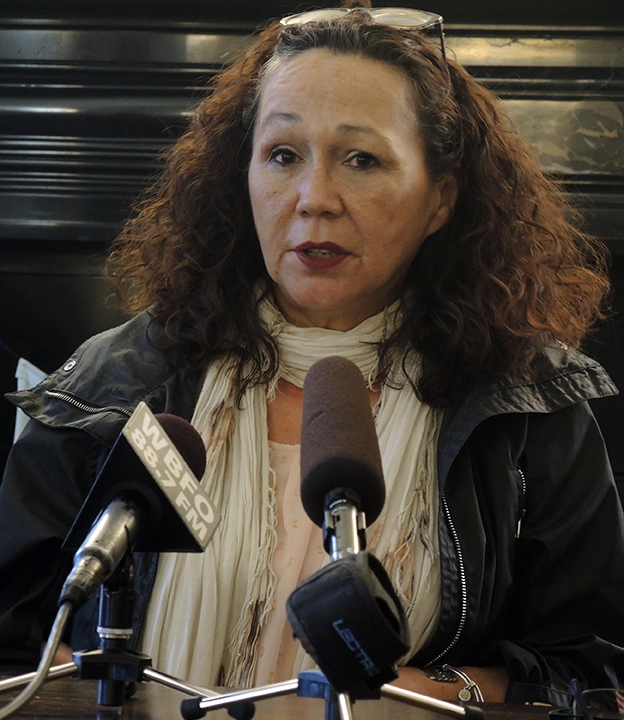 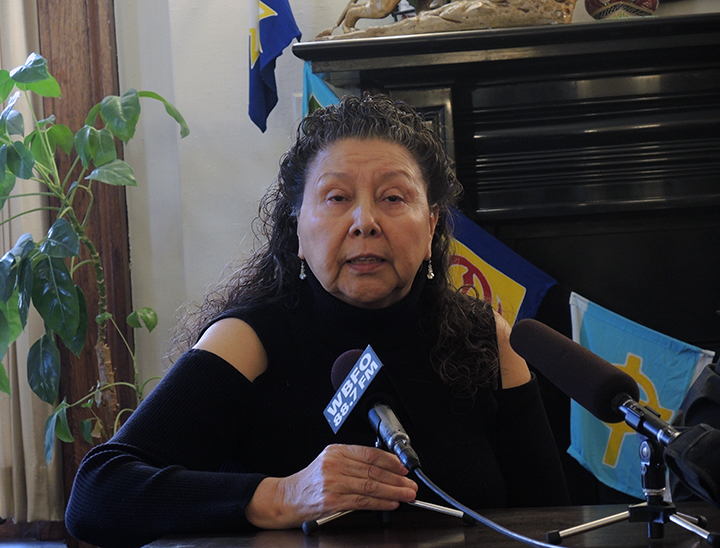 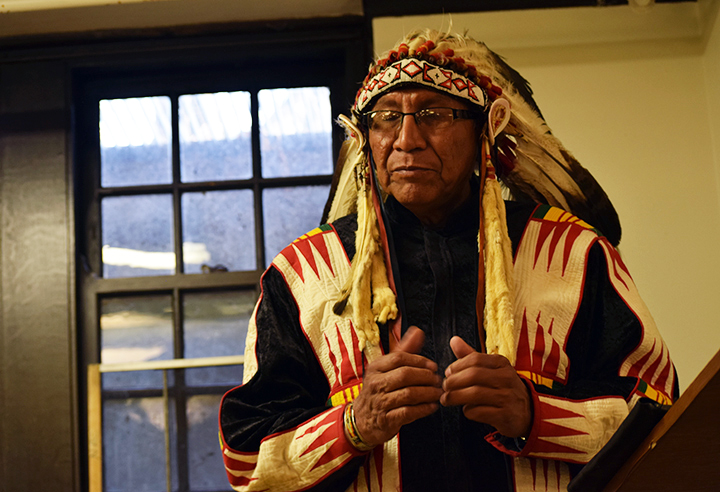 Today people at the camp are being attacked for exercising freedom of speech. Native people in the US served this country in the military more than any other ethnic group and yet we are being attacked in ways that are even against the rules of war. And that are violating our sacred sites.

The Red Hand Society knows all of our sacred sites—the location of all the burial grounds. Millions of people have lived here over the generations.

They told the Dakota Access Pipeline people (DAPL) the location of these burial grounds, that these were sacred sites. Then two days later the company moved in with the bulldozers. The women ran to the site first and others came also to stop them.

Turtle Mountain, where the police and the DAPL are perched to watch the camp and where their snipers are positioned has recent gravesites—very recent sites. But they don’t even care about this.

Many people are going out to Standing Rock. This is what people prayed for when the bulldozers moved in. These prayers went to the spirit world and people are hearing these prayers and going there. 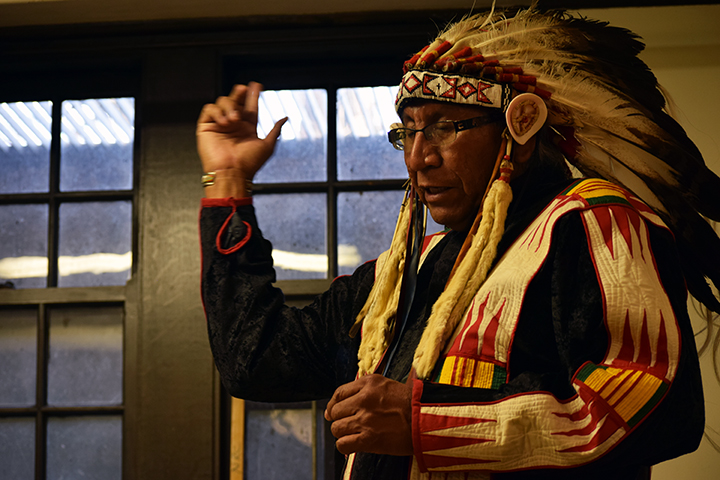 On Sunday, November 20th, when the water protectors were trying to clear the road, the police attacked the camp with concussion grenades, fire hoses, rubber bullets, and beanbag guns. They fired fifteen canisters of tear gas in the first two minutes.

During the attack, the police said they needed to use the fire hoses because people were starting fires. But if you watch the videos, you see that it was their teargas canisters and concussion grenades in the dry grass that were starting the fires. People were putting them out. The police were using the fire hoses on peaceful prayerful people in twenty degree weather. One elder went into cardiac arrest. And the woman Sophia had the flesh torn off of her arm right down to the bone by a concussion grenade. People are praying and getting shot by the police.

And they are also targeting the medics. One medic was in her car responding to a medical emergency and they grabbed her right out of the car and beat her before she could get to the elder in distress.

They are putting people in dog cages when they arrest them. They are strip-searching women in the presence of men and writing numbers on their arm.

There are also mercenaries who committed many atrocities and human rights violations in the Middle East, that were hired by Energy Transfer, the company that owns DAPL, to attack and terrorize the water protectors. During the attacks, they fire rubber bullets and beanbags at people’s faces. When they drop someone, they high-five each other. 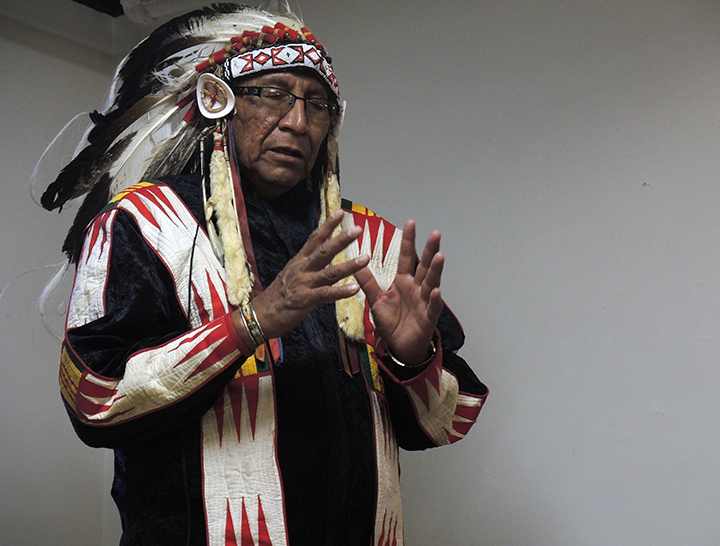 All the people want is clean water. The people up in Bismarck—which is 92% white—said they didn’t want the pipeline so it was rerouted onto Indian land. They didn’t have to protest.

Today 67% of our people are under the age of 25. They know all about the Fort Laramie Treaty of 1851. They know about the Wounded Knee massacre of 1890, when 300 men, women and children were massacred by the US Army. They know and they are outraged. 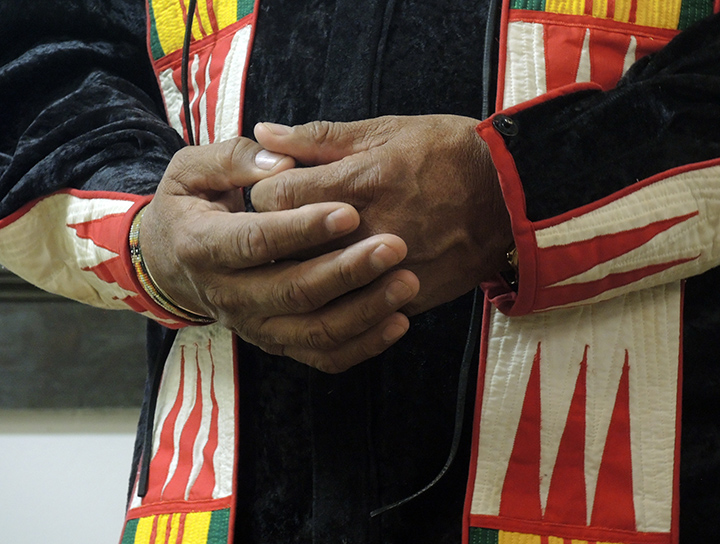 We are at the crossroads

In our Prophecies it is told that we are now at the crossroads: either unite spiritually as a Global Nation under one tree, or be faced with chaos, disasters, diseases, and tears from our relatives’ eyes.

Spirit woman brought the sacred pipe to Chief Hollow Horn. She then turned into a white buffalo and said I will return when you are in a bad way. 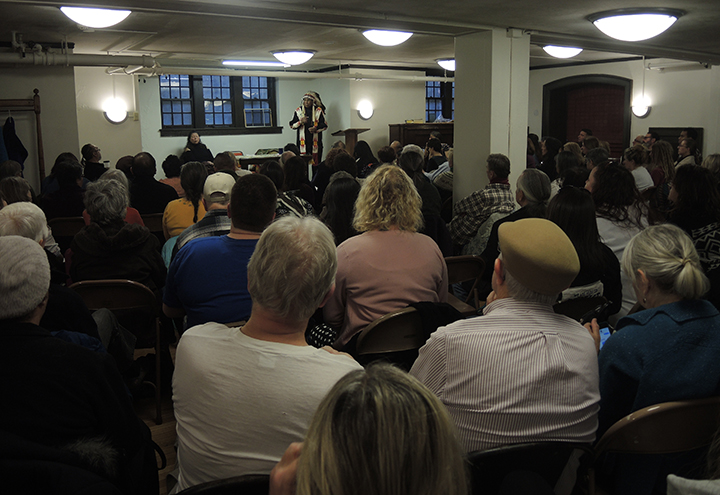 Over 200 people packed the basement of the Network of Religious Communities.

We need to unite to meet the great change that is coming or we will be in big trouble. We must unite spiritually in this global community. Every nation speaks of peace and unity and respect for the Earth. But today nothing is good. We need to bring the positive medicine back into our homes. This is why we are here, why we are associated with nature.

We’ve forgotten we are all together. It is too easy for the government when we act independently. We need to come together to accomplish anything we want, or it won’t work. 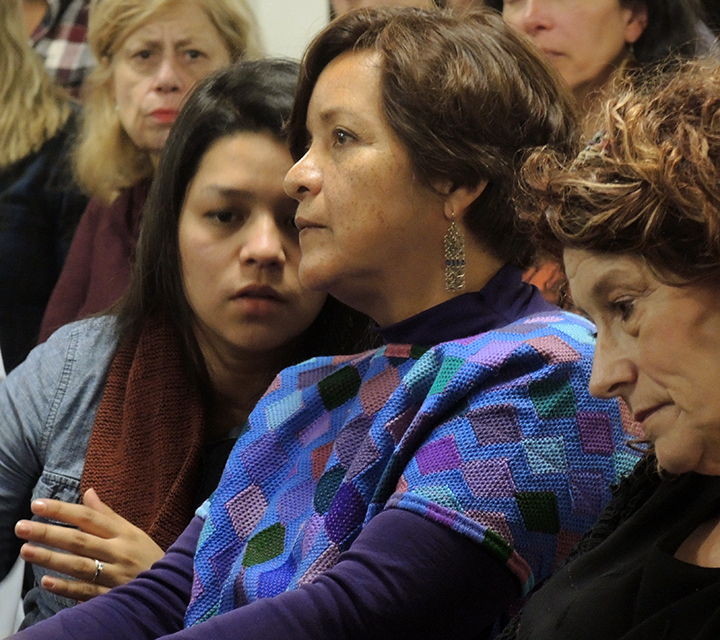 Luz Rivera Martinez is an organizer with Consejo Nacional Urbano y Campesino. She has 20 years of experience constructing autonomy, organizing outside of the electoral system, resisting genetically modified corn while protecting millennia-old varieties. She also spoke on on human rights and the women’s, peasant, and labor movements. NAFTA and land rights were important topics addressed. 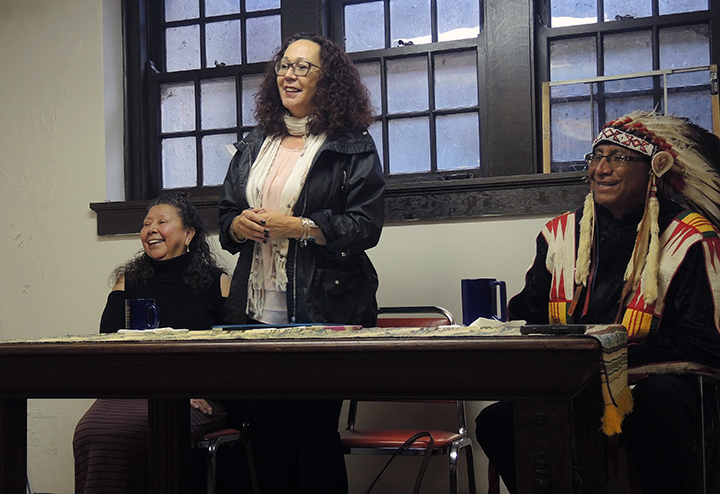 A moment of levity shared by the panelists. 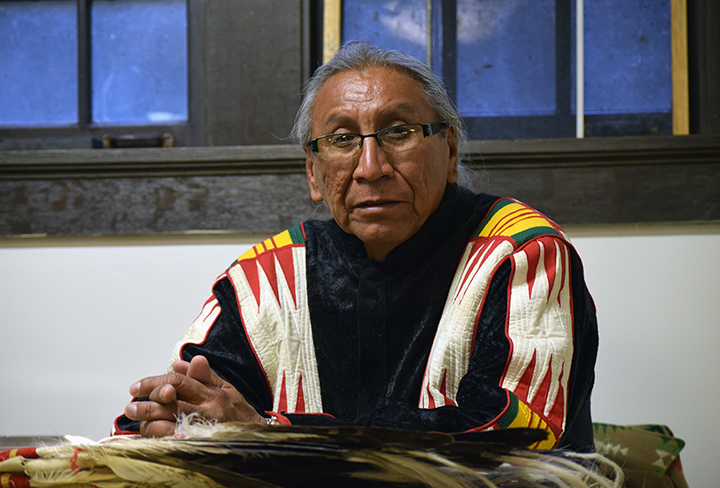 You can be Standing Rock anywhere by protecting your own water. Water is life.

What can people do?

The Camp is asking people to call Morton County to remove the sheriff who has been so brutal. Also calling on Obama to divest the pipeline. There are only 30 permanent jobs that would be created. So there is not even any good reason for this project. Obama has hurt the Sioux people by his silence on this project. We stumped for Obama and he agreed to obey the Treaty laws.

People looking for ways to take action can go to the website for Stand With Standing Rock and there are lists of supplies that are needed by the camp as well as ways to donate to the camp or visit #NoDAPL.