Via BiaNet.org:
After a break of two years, Turkey once again has become “world’s biggest journalist-prison” and ranked low in press freedom and transparency on international indices.

The State of Emergency (OHAL) declared following the coup attempt on July 15, and the Statutory Decrees (KHK) issued within the State of Emergency have brought various unlawful and excessive practices like closures, detentions and arrests among members of the Gülen Community and the Kurdish Media.

The Government has often been criticized for “becoming distant from its goals of democracy” and “using the State of Emergency to speed up its ideological transformation process within the state-structure” at national and international levels.

BİA Media Monitoring Report 2016 July-August-September points out to the diversity and vastness of
administrative and judicial interventions on the media in the third quarter of the year; 226 journalists face the risk of a life imprisonment and 2,235 years and 4 months in prison.

The report also demonstrates that 107 journalists and 10 distributors have entered October 2016 in prison, 78 journalists in custody and that 775 press cards and 49 passports have been revoked in the State of Emergency.

The report also demonstrates that in comparison to the last quarter, the number of the arrested journalists has risen from 24 to 106 the detentions from 49 to 78 and the unemployed from 45 to 2,500.

Read the full article at BiaNet.org.

In partnership with the International Federation of Journalists, which represents 600,000 journalists in 179 unions in 140 countries. It fights for journalists’ rights and media freedom. 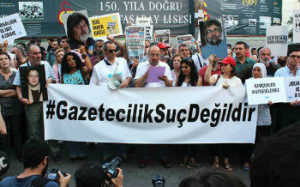 Hundreds of journalists have been arrested, sacked and harassed following Turkey’s attempted coup – set them free. Turkey experienced a bloody coup attempt on July 15 killing more than 250 people and targeting basic democratic institutions like the Grand National Assembly of Turkey (TBMM). The International and European Federations of Journalists (IFJ-EFJ) unreservedly condemn the coup and the use of force against citizens, journalists and media companies. The failed coup was followed by a state of emergency and excessive and indiscriminate measures to purge all individuals believed to be connected to the attempt. The Turkish authorities are now jailing journalists, shutting down radio and TV channels and censoring the internet in an attempt to silence criticism. 90 journalists are in jail and more than 130 media have been banned since mid-July. 2500 journalists have lost their jobs and arrest warrants have been issued for dozens of media workers. Some families of journalists, who are in hiding or have fled, have been arrested to force them to surrender. Media workers, journalists and press freedom campaigners all over the world have joined protests calling for the release of all jailed journalists in Turkey. Press freedom is essential for democracy. We demand Turkey sets the journalists free. Journalism is not a crime – Gazetecilik su degildir !

You can help! Type in your name and email address, then click on ‘Send Message’ on the bottom of this page.