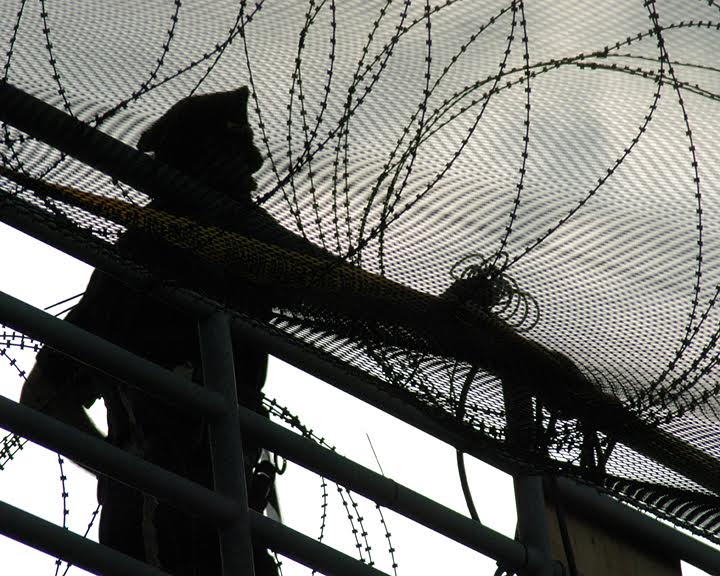 Policeman surrounded by razor wire high above on platform looking down at the so-called “Free Speech Zone,” re-dubbed by activists as the “protest pit” during the 2004 Democratic National Convention in Boston, MA.

Photographs from the 1972 Republican National Convention illustrate the resistance against the Nixon Administration’s war in Vietnam and the gap between a radical youth movement and the establishment. The Vietnam Veterans Against the War (VVAW) played a major role in the demonstrations.

The photos from the Republican National Conventions in 2004 highlight the anger at the Bush Administration over the war in Iraq and the overall disempowerment for the many. Bush and company were using Ground Zero, the site of the September 11, 2001 NYC attack, to advance their pro-war agenda.

The protests at the Democratic National Convention in 2004, not only showed the suppression of free speech, but demonstrated what activists called “the hypocrisy of the political process” by confronting the Democratic contender for president, John Kerry. Kerry, a Vietnam Veteran, was a high profile member of the anti-war movement in the 1970s, but his 2004 election platform included increasing the number of troops in Iraq.

In her October 2016 preview of the exhibit in Buffalo Spree, Editor Elizabeth Licata quoted gonzo journalist Hunter S. Thompson about the 1972 protests, “There is no anti-war or even anti-establishment group in America with the psychic leverage of the VVAW.  Not even those decadent swine on the foredeck of the Wild Rose can ignore the dues Ron Kovic and his buddies have paid.  They are golems, come back to haunt us all…”

Langelle’s 1972 photos include many of these vets, including Kovic.

“In the eleven elections since I shot those first photos in 1972, things have only gotten worse. Institutional racism is more ingrained–with Buffalo being one of the most segregated cities in the US. We are in a war without end, climate change is intensifying and injustice is rampant. Does voting change anything? This year’s election is particularly telling, as this may be the first election in US history where both candidates are so disliked by so many.”  –  Photojournalist and Gallery Director Orin Langelle.

The exhibit was assembled to explore these themes as we approach the next Presidential election.

Additionally, Langelle will give an artist’s talk at the gallery on First Friday, November. 4 at 7 p.m. – just days before the election.

The exhibit’s closing reception takes place on First Friday, December. 2 from 6-9 p.m. The gallery is located at 148 Elmwood Avenue in Buffalo.

Wine and hors d’oeuvres will be available at each event.

All events are free and open to the public.