It was shot by Langelle in 1993 during a documentary expedition to the region to investigate both the impacts on the Indigenous inhabitants by Hydro Quebec’s existing dams, as well as their resistance to future planned Hydro Quebec dams on the Great Whale (Whapmagoostui) river.  The expedition was part of a major campaign that ultimately prevented Hydro Quebec from damming the Great Whale river in Northern Quebec. 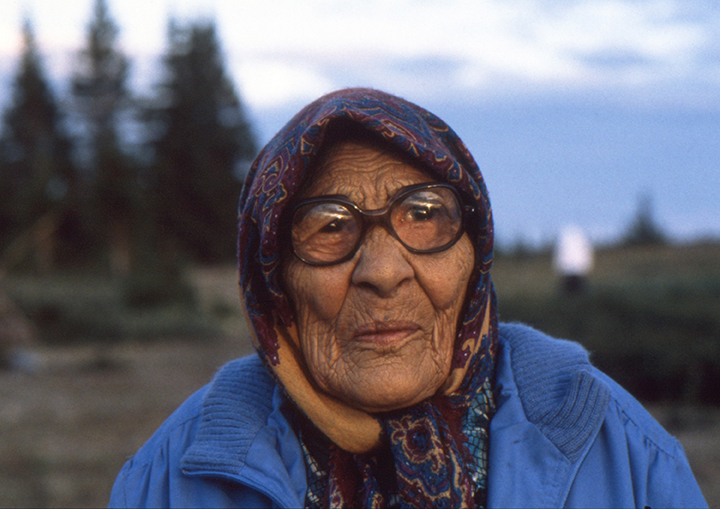 Covering 26,107 square kilometres, the parc national Tursujuq is the largest in the province. It’s located near the shores of the Hudson Bay, near the Inuit community of Umiujaq. Traces of human activity dating back 3,000 years have been found in the area, as well as evidence of Inuit and Cree trading posts.

The history…has been passed down from generation to generation of Inuit people.

Archeologists believe that groups of Palaeo-Eskimo, Dorset Eskimo, Thule and Inuit peoples progressively spread across Nunavik over the last 4,500 years. The Thule, who are the direct ancestors of the Inuit, arrived in the area around the year 1000 C.E. Effective survival techniques allowed them to thrive in the harsh Arctic climate. With a primarily nomadic lifestyle, the Thule lived along the coast and relied on hunting—and ingenuity—for their subsistence.

Thousands of years of human occupation
The ancestors of the Inuit and Cree first occupied the region some 2,800 years ago. In the 18th century, hunters explored the area and set up camps near Tasiujaq Lake, Little Whale River and Great Whale River. Since the Cree and Inuit had such different lifestyles, contact between the two groups was limited; the Inuit preferring to hunt marine animals along the coast and the Cree remaining inland, where there was more forest cover.

The fur-trade era
The Hudson Bay Company arrived to North America in 1670, ushering in an era of unprecedented change for the aboriginal peoples of James Bay and Hudson Bay. Because of the fur trade, the economy now revolved around trapping, meaning new routes were cut throughout the land. Trading posts became the new centres of activity. Interestingly, however, the Hudson Bay Company didn’t establish contact with the Inuit until the 1840s.

Over the years, various trading posts were set up on Cairn Island, the Little Whale River and on the south shore of Tasiujaq Lake. In addition to the fur trade, whale hunting was also a very important activity at the Little Whale River post. Several buildings from the former George Papp trading post are still standing at the Tasiujaq Lake site, while Cairn Island is home to several archeological sites, such as Fort Richmond.

Umiujaq and Kuujjuaraapik
The parc national Tursujuq is in Umiujaq’s back yard. Established in 1986, this village is still very young. It was created following the negotiations that led up to the signing of the James Bay and Northern Quebec Agreement in 1975. The Inuit had requested that a new community be built north of Kuujjuaraapik, given the proximity of the Great Whale River hydroelectric project. Nearly one third of the Inuit from Kuujjuaraapik moved to Umiujaq in 1986. Today, some 450 people live there, of which 36% is under the age of 15. Here, the native language is Inuktitut and subsistence activities are still central to the way of life. Most hunting and fishing takes place in the Tasiujaq Lake area, and the primary catches are marine mammals, caribou, red grouse, waterfowl and fish.

The Kuujjuaraapik-Whapmagoostui community is located at the mouth of Great Whale River, on the North shore. Two communities, one Inuit and one Cree, live here. Kuujjuaraapik means “small big river” in Inuktitut and Whapmagoostui means “river with belugas” in Cree. Sitting in the heard of sand dunes, Kuujjuaraapik is Nunavik’s southernmost community.

One of the secondary host villages is Inukjuak. This village makes extensive use of the Nastapoka River area for both traditional and cultural activities. This is one of Nunavik’s largest communities, with more than 1,600 inhabitants.