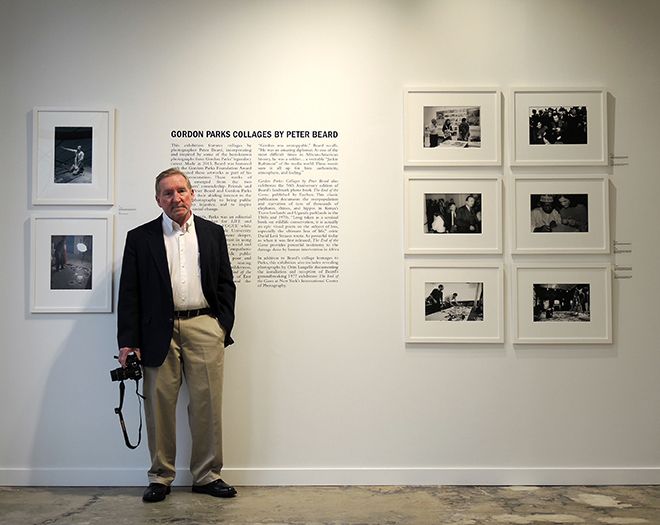 Orin Langelle by his photos (six on right and one top left) at the The Gordon Parks Foundation. Photo: Anne Petermann on 4 April 2016.

The Gordon Parks Foundation stated in a press release, “This exhibition also includes revealing photographs by Orin Langelle documenting the installation and reception of Beard’s groundbreaking 1977 exhibition The End of the Game at New York’s International Center of Photography, which accompanied the first re-issue of his classic book.”

The Parks Foundation said in their release, “The Beard collages featured in the exhibition [Gordon Parks: Collages by Peter Beard] include photographs from throughout Parks’ career, and were made in homage to the famous African-American photojournalist. Made prior to the 2013 Gordon Parks Awards, where Beard was honored for his career as an artist and humanitarian, these extraordinary works of bricolage emerged from the two photographers’ comradeship. They combine Parks’ reportage, portraiture and artistic imagery with handwritten text, ink, and found objects applied in Beard’s inimitable style.” 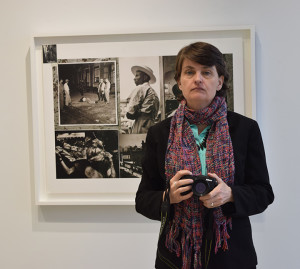 Langelle’s 1977 photos were from his show last year, The End of the Game – The Last Word from Paradise, Revisited, at the ¡Buen Vivir! Gallery for Contemporary Art in Buffalo, NY.

With the support of the Peter Beard Studio, ¡Buen Vivir! Gallery presented last year’s show to commemorate the 50th anniversary of Beard’s book, The End of the Game available through Taschen.

Langelle’s photographs at The Parks Foundation were printed by Buffalo Canvas.