Includes seven of my photographs from the recent show The End of the Game – The Last Word from Paradise, Revisited at the ¡Buen Vivir! Gallery in Buffalo concerning my four month coverage of Peter Beard’s 1977 installation at the International Center of Photography in Manhattan. I’m looking forward to the Artists Reception on 22 January and very honored to have my photographs shown in the Parks Foundation Gallery.- Orin Langelle 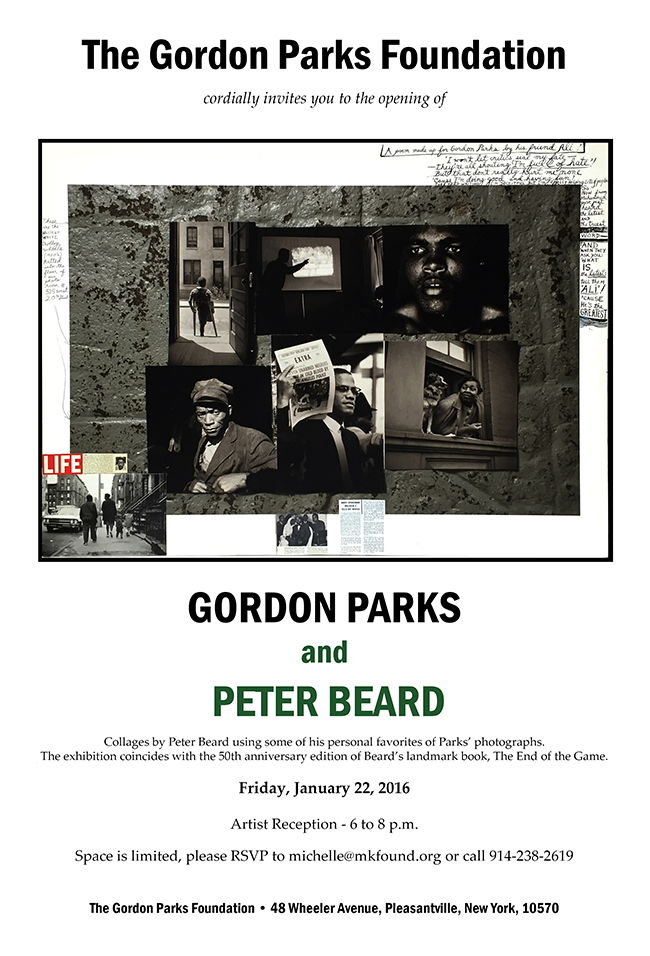 The Gordon Parks Foundation is proud to present Gordon Parks: Collages by Peter Beard, featuring collages made by Beard in 2013, incorporating and inspired by some of the best-known photographs from Parks’ legendary career. Friends and colleagues, these two pioneering figures shared an abiding interest in the power of photography to bring public attention to injustice, and to inspire passion for social change.

Beard and Parks were friends and colleagues, mutual admirers from the moment they met through their agent, Peter Schub. In the early 1960s, Parks was an editorial magazine photographer for LIFE and Beard did some work for Diana Vreeland at VOGUE while he was studying art at Yale. Among their earliest interactions, Parks enlisted Beard as a model for a fashion shoot…”Peter Pan in Central Park.” But their shared respect went deeper, resting on their common interest in using the camera as a tool to address social and environmental problems. Parks’ empathetic picture stories brought wide public attention to the lives of the poor and marginalized, while Beard’s searing photographs of Kenya’s Tsavo wilderness, soon to be published in The End of the Game: The Last Word from Paradise, told the harrowing story of East Africa’s despoiled ecosystem and the endangerment of its wildlife.

“Gordon was unstoppable,” Beard recalls. “And he was an amazing diplomat. At one of the most difficult times in African-American history, he was a soldier… a veritable ‘Jackie Robinson’ of the media world. Three words sum it all up for him: authenticity, atmosphere, and feeling.”

The Beard collages featured in the exhibition include photographs from throughout Parks’ career, and were made in homage to the famous African-American photojournalist. Made prior to the 2013 Gordon Parks Awards, where Beard was honored for his career as an artist and humanitarian, these extraordinary works of bricolage emerged from the two photographers’ comradeship. They combine Parks’ reportage, portraiture and artistic imagery with handwritten text, ink, and found objects applied in Beard’s inimitable style.

This exhibition also includes revealing photographs by Orin Langelle documenting the installation and reception of Beard’s groundbreaking 1977 exhibition The End of the Game at New York’s International Center of Photography, which accompanied the first re-issue of his classic book. Just two years earlier, Parks’ show Moments Without Proper Names helped inaugurate ICP’s first year of operation as a museum of photography. Together, Beard and Parks were among the first photographers to mount solo exhibitions at this important Manhattan institution, at a crucial point in the development of a widespread audience and mainstream acceptance of photography as an art form… (One of Beard’s elephant herds was wrapped around the 70-foot facade of the I.C.P.)

Gordon Parks: Collages by Peter Beard also celebrates Taschen’s 50th Anniversary Edition of Beard’s photo-book, The End of the Game. This handsome volume, available for sale at the exhibition, is published in a limited edition of 5000 copies and includes an updated foreword by internationally-renowned travel and fiction writer Paul Theroux. Heralding Beard’s 1965 Viking Press edition in The Book of 101 Books, critic David Levi Strauss wrote: “Long taken as a seminal book on wildlife conservation, [The End of the Game] is actually an epic visual poem on the subject of loss, especially the ultimate loss of life.”

Gordon Parks: Collages by Peter Beard will be on view through April 23, 2016 in the exhibition space of The Gordon Parks Foundation, located at 48 Wheeler Avenue in Pleasantville.

Born in New York City in 1938, Peter Beard began taking photographs and keeping diaries from early childhood. By the time he graduated from Yale University with a degree in art, Beard had already developed a keen interest in Africa. Throughout the 1960s and ’70s he worked in Tsavo Park, the Aberdares, and Lake Rudolf in Kenya’s northern frontier. His enduring relationship with East Africa—its landscape, wildlife, and peoples—has become the predominant artistic and intellectual wellspring for his unique imagery. A constant creator, Beard collages his own photographs with historic scenes, ephemera, handwritten and printed text, found objects, diary pages, blood, ink, and watercolor. He uses photography as a medium and his photographs as a canvas. He has collaborated with many of the greatest artists of our time, including Francis Bacon, Salvador Dali, Andy Warhol, Josef Albers, and Richard Lindner. He lives in New York City, Long Island, and Kenya with his wife Nejma, and daughter Zara.

Gordon Parks was born into poverty and segregation in Fort Scott, Kansas in 1912. An itinerant laborer, he worked as a brothel pianist and railcar porter, among other jobs, before buying a camera at a pawnshop, training himself, and becoming a photographer. In addition to his legendary tenure photographing for the Farm Security Administration in the 1940s and LIFE magazine from 1948-72, Parks evolved into a modern day Renaissance man, finding success as an author, film director, and composer. The first African-American to helm a major motion picture, Parks directed Shaft in 1971. He wrote numerous memoirs, novels, and books of poetry; won countless awards, including the National Medal of Arts; and received more than fifty honorary degrees during a life of restless creativity and wide-ranging accomplishment. Parks died in 2006.

The Gordon Parks Foundation’s mission is to permanently preserve the work of Gordon Parks, make it available to the public through exhibitions, books, and electronic media, and support artistic and educational activities that advance what Parks described as “the common search for a better life and a better world.” The primary purpose of The Gordon Parks Foundation’s exhibition space is to present focused exhibits of Parks’ photography, as part of the Foundation’s commitment to educating the public and preserving his work.