While the “Reviews and Press Coverage” page is under construction, some of the posts are sent out again on the RSS feed. Apologies.

Despite no charges, monitoring remains 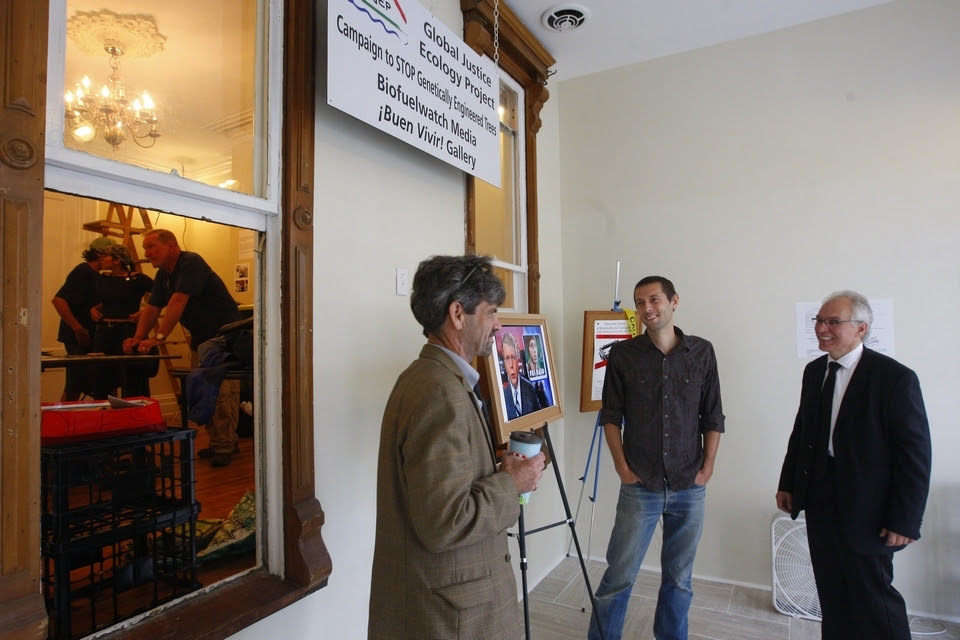 Leslie J. Pickering, center, talks with his attorneys Daire B. Irwin, left, and Michael Kuzma during the installation of his exhibit at the ¡Buen Vivir! Gallery in Buffalo on Tuesday. Photos by Mark Mulville/Buffalo News

Except for an old Underwood typewriter, Leslie James Pickering never really wanted or expected the FBI to return the computers and office equipment agents seized in a raid 14 years ago.

But when the FBI finally offered, Pickering, the owner of Burning Books in Buffalo, saw an opportunity to draw attention to the government’s on-again, off-again surveillance of him.

And he’s doing it through art.

At a gallery on Elmwood Avenue Wednesday night, Pickering unveiled a multimedia art installation depicting the press office he ran while serving as spokesman for the Earth Liberation Front (ELF), a radical environmental group that gained national attention in the late 1990s.

ELF is best known for a series of arsons in the late 1990s and early 2000s at dozens of businesses – timber companies, car dealerships and slaughterhouses – that it believed were destroying the environment.

Pickering, who has been monitored by federal agents for more than a decade but never charged, says he never did anything criminal and that his role was limited to passing along information the group wanted shared with the public and press.

Read more in The Buffalo News