The installation includes items seized in an April 5, 2001 raid by a Joint Terrorism Task Force led by the FBI on the Earth Liberation Front Press Office in Portland, OR. These objects, returned fourteen years after the raid, include fax machines, computers, a cell phone, phone books, and typewriters. The communications equipment seized belonged to the former ELF press officers, including current Buffalo Burning Books co-owner, Leslie James Pickering. 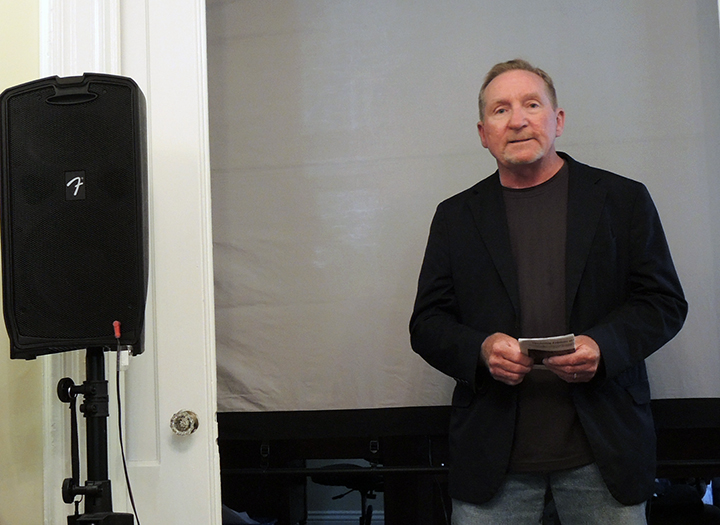 Orin Langelle, curator of the ¡Buen Vivir! Gallery opens installation welcoming guests and thanking all those who helped put the show together. Photo: Petermann/GJEP

Although the gallery was prepared and lighting completed, with news clips rolling and photos and documents mounted on the wall prior to the opening on the 15th, the shipment of returned objects arrived at the gallery in boxes around 6:30 a.m. that morning, making for an interesting scramble for those working on the installation. The installation was finished at 6:02 p.m. – only two minutes late. 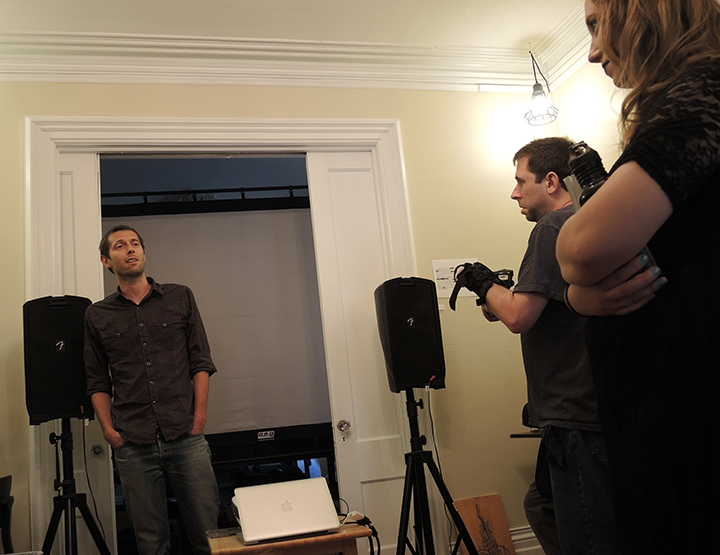 The last time Pickering saw the returned objects was fourteen years ago. Pickering continues to be watched by the FBI even though there was never any evidence that he participated in any action with the Earth Liberation Front. 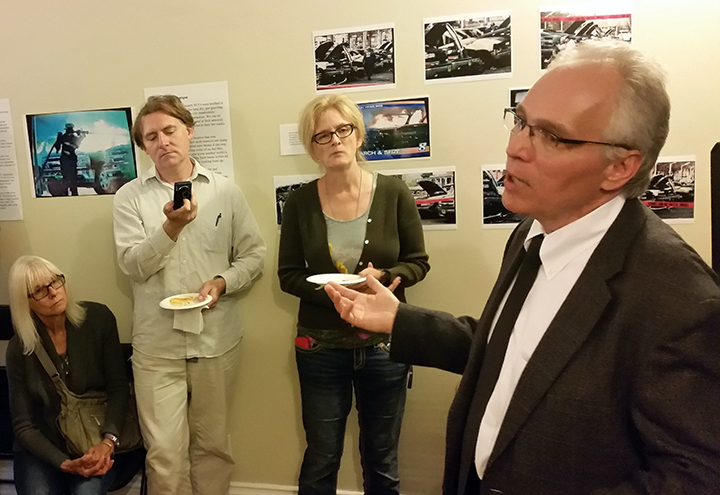 Attorney Michael Kuzma, one of Pickering’s attorneys, speaks to the crowd. Photo: Doyle/GJEP

“The seizure of computers and other office equipment by the FBI from Leslie James Pickering and Craig Rosebraugh’s residence was aimed at crippling the ELF Press Office,” was one of Michael Kuzma’s statements on display at the gallery. 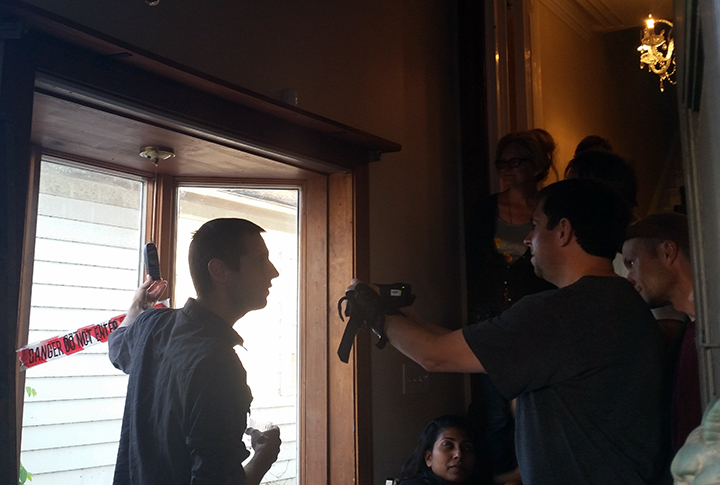 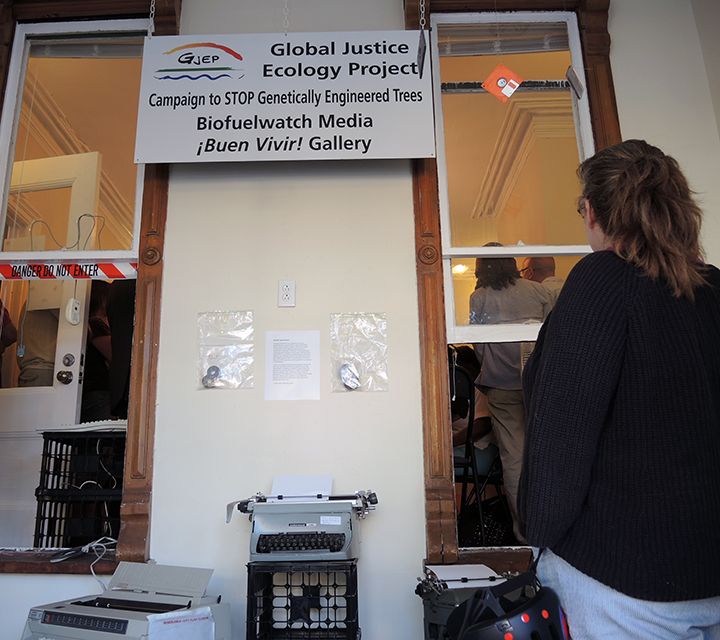 Woman watches the presentation through the window of the gallery’s front display space as part of the overflow crowd that did not fit into the packed room. Photo: Petermann/GJEP 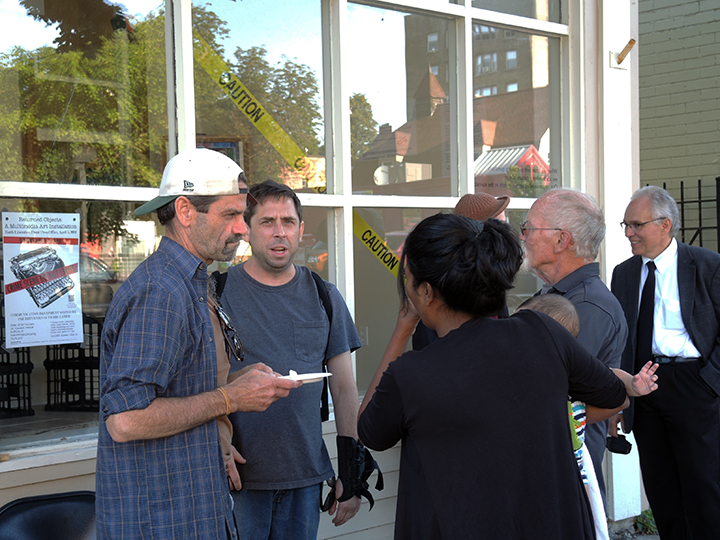 Outside of gallery. Attorney Daire B. Irwin (left). Photo: Petermann/GJEP 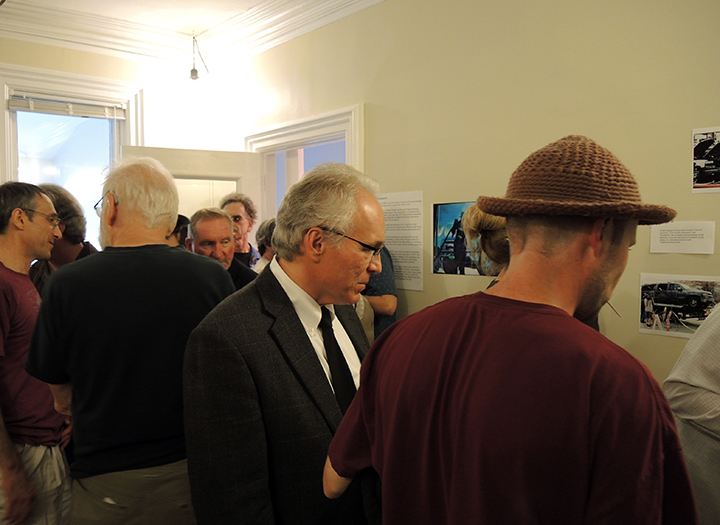 Another shot of Kuzma; this time looking at some of the items on display. Photo: Petermann/GJEP

Another of Kuzma’s statements on the gallery wall read, “The primary mission of the FBI is to monitor and crush domestic political dissent.  In the case of Pickering and Rosebraugh, the FBI failed miserably in its attempt to quash Leslie and Craig’s First Amendment rights.  Both Leslie and Craig remain committed to the fight for political, social and economic justice.”

The installation will be on display until July 26th in the ¡Buen Vivir! Gallery, 148 Elmwood Avenue, Buffalo NY.

Hours and more information about the art installation can be found here and: