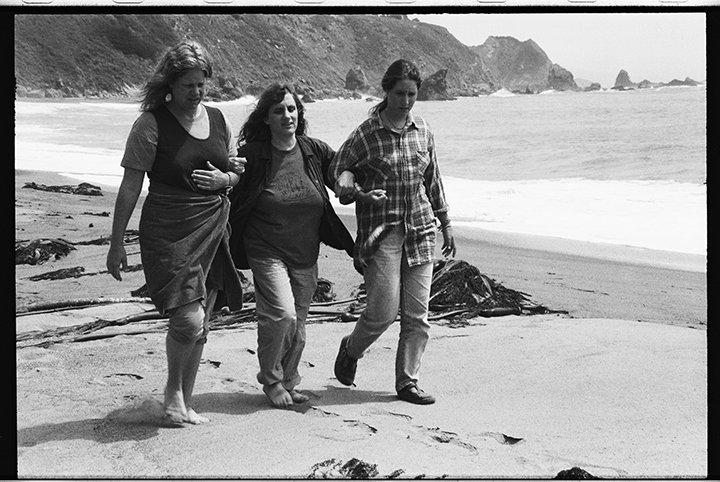 Judi Bari, center, walks on a Pacific Ocean beach in California with the support of two women friends after a pipe-bomb ripped through her car in 1990

Judi Bari was a North American environmentalist and labor leader, a feminist, and the principal organizer of Earth First! campaigns against logging in the ancient redwood forests of Northern California in the 1980s and ’90s. She also organized efforts through Earth First! – Industrial Workers of the World Local 1 to bring timber workers and environmentalists together in common cause.
In 1986, Houston millionaire Charles Hurwitz acquired Pacific Lumber Company and doubled its rate of timber harvesting as a means of paying off the acquisition cost. This enraged environmentalists and drew attention from government agencies because of his use of junk bonds.

In 1989 Judi and other Earth First!ers came up with the idea of Redwood Summer, protests inspired by Freedom Summer, and by the Freedom Riders of the civil rights movement. Bari was instrumental in the process of calling in demonstrators from college campuses across the United States. Reactions to her lobbying tactics were severe, including the ramming of her car by a logging truck in 1989, as well as death threats.

On 24 May 1990, in Oakland, California, the vehicle used by Bari and colleague Darryl Cherney was blown up by a pipe bomb under Bari’s seat. Bari was severely injured, but was arrested for transporting explosives while she was still in critical condition with a shattered pelvis and other major injuries. The FBI took jurisdiction of the case away from the Bureau of Alcohol, Tobacco, Firearms and Explosives, alleging it was an eco-terrorism case.

Bari’s injuries disabled her to the extent that she had to curtail her activities. While she lay healing, Redwood Summer took place. In late July 1990, the Oakland district attorney declined to press charges against Bari and Cherney, claiming insufficient evidence. The false arrests and illegal search warrants became the basis of Bari’s civil rights suit filed the following year but not decided until 2002, five years after her death, when her estate was awarded $4 million in damages.

This photo taken by Orin Langelle is part of the exhibit Struggles for Justice: Forests, Land and Human Rights – Late 80s to Late 90s is dedicated to Judi Bari (7 November 1949- 2 March 1997). The exhibit is on display at the ¡Buen Vivir! Gallery in Buffalo and is online here

Twenty-five years later: Who Bombed Judi Bari? to be presented in Buffalo

Buffalo, NY (18 May 2015)–A quarter of a century ago this month a pipe bomb ripped through the car of activist Judi Bari in Oakland, CA as she and Darryl Cherney were on their way to a rally to support halting the logging of ancient redwood trees.

At 7 p.m. this Thursday, 21 May, Buffalo-based Global Justice Ecology Project, Langelle Photography and Burning Books will present the documentary Who Bombed Judi Bari? at the Burning Books bookstore, located at 420 Connecticut Street, Buffalo. This showing is one of many events occurring across the country in observation of 25th anniversary of the bombing of Bari and Cheney.

The multi-award winning feature documentary Who Bombed Judi Bari? is a suspenseful story about people who risked their lives to save the California redwoods and took on the FBI for trampling their freedom of speech. It showcases an amazing protest movement that succeeded against all odds – with creativity, music, and humor.

Global Justice Ecology Project’s Anne Petermann said, “As part of a slander campaign against Bari and Cherney, the FBI arrested them for the bombing and never pursued any other suspects, Charges were never filed for lack of evidence. Bari and Cherney later sued the FBI successfully for violating their civil rights, and were awarded $4 million.”

“Judi Bari was not only an Earth First! activist, she also organized workers in the timber industry, attempting to bring them together with environmentalists, explaining the industry was destroying both the redwoods and the workers’ livelihoods,” said Orin Langelle, Director of Langelle Photography.

Global Justice Ecology Project co-founders Orin Langelle and Anne Petermann, friends of Bari and Cherney, will speak at the event.