Yesterday, 19 April 2015, Brooke Anderson (https://www.movementphotographer.com) a colleague from California sent me via Facebook the article, Photography Against the Walls, A history of photographers who prefer the streets to the museum written by David Bacon.

David Bacon is a California writer and documentary photographer. A former union organizer, today he documents labor, the global economy, war and migration, and the struggle for human rights.

Great piece by my friend David Bacon on the history of social movement photographers: “But he treated his subjects as human beings, with dignity, rather than representing them as helpless victims. Lopez famously remarked that, ‘Photography was not meant as art to adorn walls, but rather to make obvious the ancestral cruelty of man against man.'” 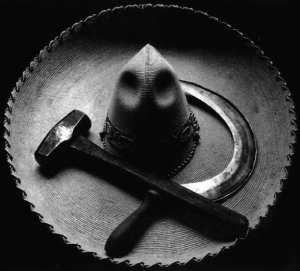 Bacon’s article begins. “A hundred years ago, one revolution had been upending the social order just south of the US border and another revolution was about to begin halfway around the world. These revolutions did more than expropriate the property of the wealthy. They discarded old ideas and created a field in which new ones took their place. This was especially true with photography…”

I enjoyed Bacon’s article tremendously. Starting off with some photos by Tina Modotti, one of my personal inspirations, Bacon describes the changing visions of Mexican photographers (and artists) in the early 1900s, “who saw themselves as agents of social change rejected the old vision and sought a new one.”

Bacon continues a historical view of social documentary photography through the turbulent 30s and onwards, not only in Mexico, but also north of the border.

Bacon mentions the late Buffalo-based Milton Rogovin, “one of the few US photographers who maintained a commitment to social documentary photography during the Cold War.”Since I moved to Buffalo almost three years ago, Rogovin has has left a deep impression on me. And I highly recommend reading Bacon’s entire article here.