Formerly with The United Freedom Front 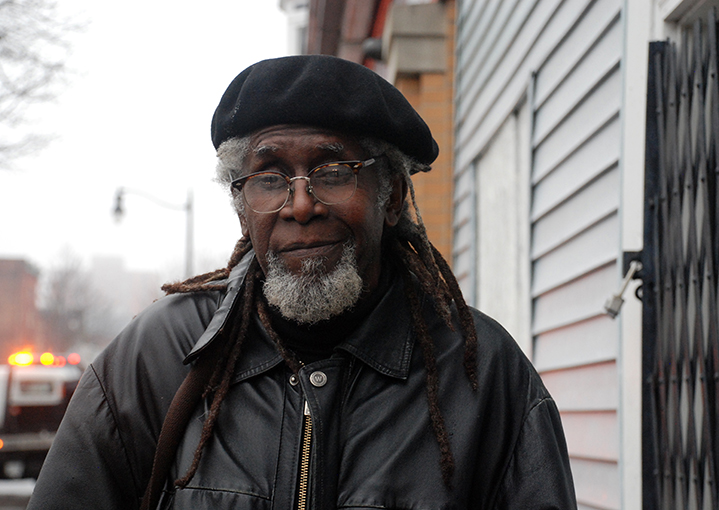 As a member of the United Freedom Front (UFF), Kazi Toure was imprisoned for his role in 20 bombings combating Apartheid in South Africa and United States Imperialism in Central America. The UFF has been called “undoubtedly the most successful of the leftist [guerrilla groups] of the 1970s and ’80s” and struck powerful blows to South African Airways, Mobil, IBM, Union Carbide, & various courthouses and US Military targets. [Source: NYC Anarchist Black Cross*]

I shot this portrait of Kazi Toure immediately prior to his speaking event at local independent radical bookstore Burning Books in Buffalo, NY on 25 March 2015.

I believe the photograph is very relevant in today’s world. I watched Baltimore on fire last night [27 April 2015] and listened to the media pundits (especially on Fox) saying they had no idea why people are so angry. The pundits were blaming the black mayor and a myriad of other people for what was going on. The racist garbage spewed continuously from the TV screen. Of course they conveniently skipped the root causes of the unrest.

I did hear many black people interviewed explaining why people are so angry – from police brutality, racism, and living conditions, to the incarceration of young black men. The NAACP reports:

I have no idea how many people last night were protesters, rioters or agitators – but they were people. And it is evident that many people are angry and not just in Baltimore.

I do not know what take Kazi Toure has on all of these developments, but I felt today was a good day to look back at a not so distant history, as I do not want “history” written by Fox.

In Kazi Toure’s own words prior to his parole:

I am a New Afrikan political prisoner who has been held in captivity my entire life. Every since the mid 1960s when I learned about Nat Turner, Denmark Vesey, slave revolts and the history of resistance, I’ve been of one mind in spirit with Afrikan peoples’ struggle for self-determination and freedom.

The u.s government was founded on the genocide of native people, the enslavement and colonization of Afrikan people, and the robbing of Mexican peoples’ land. Our only means of survival is building our New Afrikan nation, fortified by stiff resistance. We must organize our communities and build alternatives to meet that community’s particular needs, and also be able to defend ourselves and our communities. No people have ever gotten their freedom without a fight.

In 1982, I was convicted on federal charges of possession of firearms and sentenced to six years. Later I was convicted on the same charges under state law and sentenced to a consecutive four to five years.  I am currently serving a sentence of seven years for the conviction of Seditious Conspiracy—conspiring to overthrow, put down, destroy by force and violence the u.s. government. I am one of the few, if any, New Afrikans to be charged of this act. I will be eligible for parole in October, 1991. Stand Firm… Amandla.

This was the third of a series of candid portraits I have taken and will continue to take of radical movement figures in collaboration with Burning Books.  The point of this endeavor is to document some of the people who have participated in the making of history in the ongoing struggle for freedom and justice – a history of victories, losses, mistakes and successes, that we can and should learn from.

Personal Note: Richard Charles Williams, a member of the United Freedom Front, died while in prison in December 2005. In the early 2000’s I had the pleasure of meeting his son who was a freshman at the University of Vermont. After his graduation there, he moved to the Vermont countryside. I consider him to be a friend.

* As stated, NYC Anarchist Black Cross was the source for the photo caption.