This photo of a burning dumpster below is not intended to incite – it is meant to show a snippet of history that symbolizes the outrage of that time.  It is history that I believe should not be covered up, lest we forget the words like those of Fredrick Douglas:

If there is no struggle, there is no progress. Those who profess to favor freedom, and yet depreciate agitation, are men who want crops without plowing up the ground. They want rain without thunder and lightning. They want the ocean without the awful roar of its many waters. This struggle may be a moral one; or it may be a physical one; or it may be both moral and physical; but it must be a struggle. Power concedes nothing without a demand. It never did and it never will. 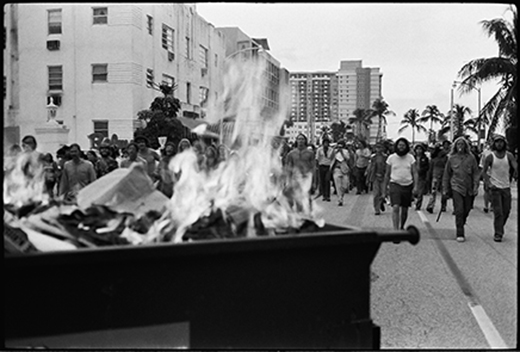 A dumpster on fire during the 1972 Republican National Convention in Miami Beach, FL. Demonstrators showed their outrage as they protest the lives lost (both U.S. and Vietnamese) in the Vietnam War. Thousands of anti-war demonstrators massed at the convention to show their opposition to the war. Photo: Langelle

The U.S. pulled out of Saigon on 30 April 1975 after over 58,000 U.S. troops and milliona of Vietnamese were killed in that war. People I knew came home with deep sadness. The above photo was taken during the 1972 anti-war protests at the Republican National Convention in Miami Beach, FL.

A militant anti-war movement in the U.S., combined with refusal and disobedience by U.S. soldiers in Vietnam, and the resistance of the Vietnamese people themselves stopped the most unpopular war in U.S. history.

But war against people and the earth continues today. It is happening around the world. It is happening in the U.S. Last year in Ferguson as one example. Now in Baltimore the rage against this death culture boiled over.

Fortunately there are people putting out powerful messages about what is occurring, countering “official media” and the authorities.

On 29 April 2015 Iraq Veterans Against the War (IVAW), a national group of Post 9/11 veterans, called on the Maryland National Guard to stand down from their mobilization to Baltimore.

As 1,000 soldiers currently deploy to put down an uprising of exploited people who have been terrorized by a consistently racist police department, we stand in solidarity with the people of Baltimore and encourage service members and veterans to listen to their fellow community members and to stand on the right side of history.

We know that the death of yet another black person at the hands of police is not unique or new in our country. We also know that the rage we are seeing in the streets is the direct result of a legacy of police departments and a prison system that dehumanizes and targets black people and people of color and the result of a morally bankrupt economy that continues to profit off of the backs of poor people across the country. We stand with those people who have lifted up the banner of #BlackLivesMatter to ensure that fundamental change takes place in our country.

The irony of the National Guard deployment to quell protests due to the death of Freddie Gray at the hands of police is not lost on us as we approach the 45th anniversary of both the Jackson State and Kent State shootings, where the National Guard and police were deployed to silence protestors with deadly consequences.

As veterans who have deployed to and served in support of occupations abroad, we see some of the same tactics and military equipment being used by police against the people of Baltimore, just as it was used against the people of Ferguson and Oakland. The increased militarization of our foreign policy and our domestic policing, coupled with racist violence perpetuated by our government, has to stop. The people of Baltimore demanding systemic change should be responded to with dialogue not an escalation of force. We encourage National Guard members across the country, many of whom we have served with, to begin a conversation on how they will respond when it becomes their turn to be mobilized against their own communities.