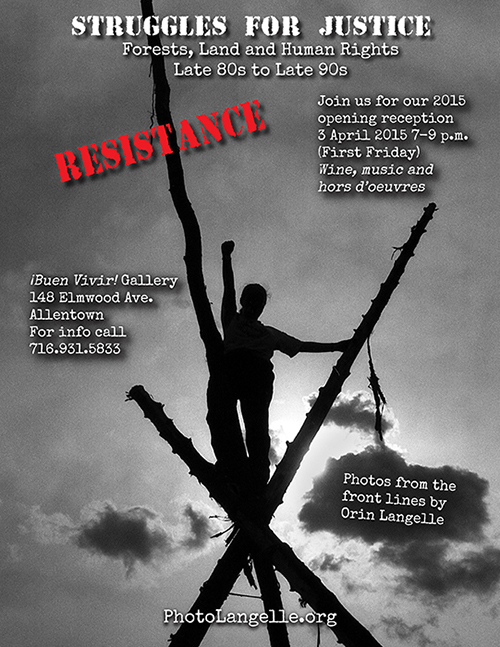 Allentown’s ¡Buen Vivir! gallery opened its doors for the 2015 season on Friday 3 April 2015 (First Friday) with an exhibit titled: Struggles For Justice: Forests, Land and Human Rights – Late 80s to Late 90s. Live music was provided at the opening by accomplished violinist and composer, David Adamczyk.

The exhibit showcases photographs by photojournalist and gallery curator Orin Langelle. The photos document the efforts of people on the front lines of campaigns to stop social and ecological injustice. All of the photographs were shot with film.

The ¡Buen Vivir! Gallery is dedicating the exhibit, Struggles for Justice, to Judi Bari. Bari was a environmental and union organizer in northern California who fought to stop the logging of the last of the ancient redwoods. May 24th of this year will mark the 25th anniversary of the attempt to kill Bari when a pipe bomb exploded under the seat of her car.

Although the bomb was intended to kill her, and did severely maim her, the FBI immediately arrested her while in the hospital. They never looked for the real bomber. Bari maintained she was targeted due to her success in bringing environmentalists and mill workers together to protect the redwoods. She died of breast cancer in 1997, but her estate sued the FBI over their handling of the bombing, resulting in a $4 million settlement.

Together with Burning Books, Langelle Photography and Global Justice Ecology Project will show the documentary Who Bombed Judi Bari? (see trailer below) on Wednesday, 21 May 2015 at Burning Books. Burning Books is located at 420 Connecticut St. in Buffalo, NY.

Previews of the Exhibit:

The  ¡Buen Vivir¡ Gallery is located at the offices of Global Justice Ecology Project, which also house the international Campaign to STOP Genetically Engineered Trees, and Biofuelwatch‘s U.S. media program.


Multi-Award winning feature documentary Who Bombed Judi Bari? is a suspenseful story about people who risked their lives to save the California redwoods and took on the FBI for trampling their freedom of speech. It shines a light on an amazing protest movement that succeeded against all odds – with creativity, music, and humor. In 1990, a bomb blew up in the car of two of the most prominent Earth First! redwood activists: Judi Bari and Darryl Cherney. They were accused of bombing themselves, but twelve years later won their landmark lawsuit against the FBI, proving that officers falsified evidence and intentionally tried to frame them. To date, the real bomber has never even been searched for and remains at-large. Directed/Edited by Mary Liz Thomson, Produced by Darryl Cherney, Executive Producer Elyse Katz, Co-Executive Producer Sheila Laffey, Co-Executive Producers Bill & Laurie Benenson

Moving to Allentown in 2012, concerned photographer Orin Langelle has documented a wide range of topics, cultures, ecosystems and geographies for over four decades and across six continents. The topics represented in his body of work include struggles against human rights abuses, economic injustice, ecological devastation and the oppression of women, as well as Indigenous Peoples’ efforts for autonomy and land rights.

The ¡Buen Vivir! Gallery was founded to present an historical look at social movements, struggle and everyday life. It is designed to counter the societal amnesia from which we collectively suffer—especially with regard to the history of social and ecological struggles, and to inspire new generations to participate in the making of a new history.

The name of the gallery, ¡Buen Vivir!, is a concept stemming from indigenous and other inhabitants of Latin America. ¡Buen vivir! means life in harmony between humans, communities, and the Earth–where work is not a job to make others wealthier, but for a livelihood that is sustaining, fulfilling, and in tune with the common good.

This is a concept slowly spreading northwards and the ¡Buen Vivir! Gallery aims to bring this thought to Buffalo. 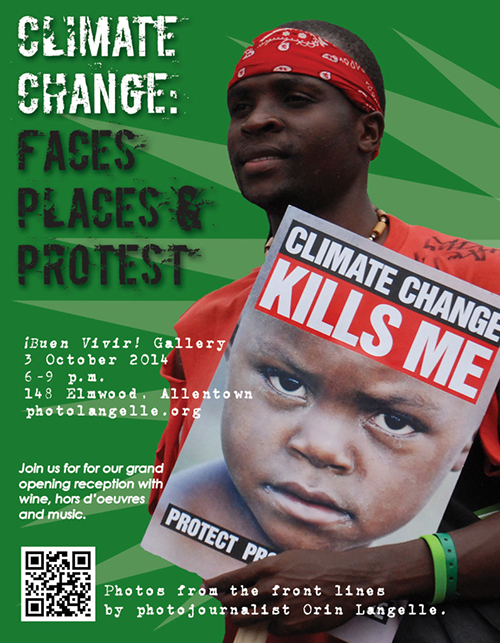 A new gallery in the historic Allentown district in Buffalo, NY, ¡Buen Vivir¡, opened its doors Friday 3 October 2014 with an exhibit Climate Change: FACES PLACES & PROTEST – photos from the front lines, that showcases more than two decades of work by photojournalist and gallery curator Orin Langelle.

The climate crisis was chosen as the theme for the gallery opening due the impacts it has on communities, ecosystems and human rights struggles.  The theme was also timely.  The exhibit began shortly after the 21 September climate march and the 23 September UN Climate Summit hosted by UN Secretary General Ban Ki Moon in New York City, and ended on 5 December 2014 during the UN Climate Conference and Peoples’ Climate Summit, in Lima, Peru in December.

Langelle’s exhibit, “Climate Change: FACES PLACES & PROTEST – photos from the front lines,” documents a wide range of topics including the aftermath of Hurricane Mitch in Nicaragua in 1998, 2011’s Hurricane Irene in Vermont, as well as protests and demonstrations during UN Climate Conferences spanning five continents, between 2004 and 2011.

“Orin Langelle may not be a combat photographer, but he has risked his safety and well being to cover peoples’ struggles for a better life, sometimes in remote territories deep in the jungle, in communities imminently threatened by military or paramilitary invasion, or immediately after a natural disaster,” stated Anne Petermann, Executive Director of Global Justice Ecology Project. “This gallery will be an opportunity for the people of Buffalo to be exposed to this important body of work.”

The  ¡Buen Vivir¡ gallery is located at the offices of Global Justice Ecology Project, which also house the international Campaign to STOP Genetically Engineered Trees, and Biofuelwatch.

Prior to this show, an exhibit of Langelle’s photos documenting impacts of and response to the climate crisis was held last November at the 2013 UN Climate Conference in Warsaw, Poland.

Moving to Allentown in 2012, concerned photographer Orin Langelle has documented topics, cultures, ecosystems and geographies across six continents, including struggles against human rights abuses, economic domination, ecological devastation and the oppression of women, as well as Indigenous Peoples’ efforts for autonomy and land rights.