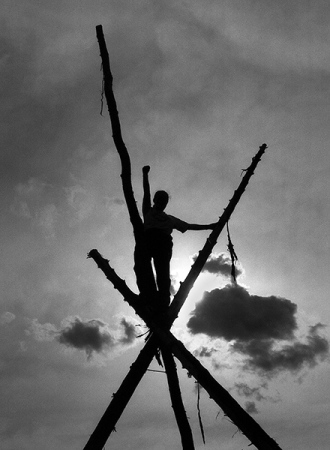 Over the last four decades, Orin Langelle, a photographer who formally trained at the International Center of Photography in Manhattan, has uniquely woven together photojournalism and activism, with astonishing results. His newly released body of work covering more than fifteen years beautifully illustrates this accomplishment. The photos in this essay document direct action campaigns for both social, ecological and economic justice issues, as well as Indigenous Peoples’ struggles to protect their traditional lands. The fact that he is not just a photographer but also an activist has enabled him to gain access to these struggles in ways few others have.

Langelle explained the reason for this. “Because I approach my role as not merely documenting the struggle for social and ecological justice, but being an active part of it, I have been able to garner the trust of many of the people I have documented, allowing me access that would not have been possible otherwise. In this way, I have been able to expose the truth that is so often hidden by the powers of injustice.”

But, he points out, his photos are not meant just to expose injustice, they are meant to change it. “The photos in this essay document history. They counter the societal amnesia from which we collectively suffer—especially with regard to the history of social and ecological struggles. But this photo essay is also a call out to inspire new generations to participate in the making of a new history.  For there has been no time when such a call has been so badly needed,” he said.

Aziz Choudry, Assistant Professor in the Department of Integrated Studies in Education at McGill University in Montreal explains why the combination of activism and photojournalism is so important,

“Langelle’s unique work documents hidden and forgotten histories of the resistance against the war on the planet and the majority of its population. His images provide glimpses of possibilities– when ordinary people act collectively to fight imperialism, war and colonialism, and confront ecological devastation, to build a different world.

“Combining the passionate eye of a seasoned photojournalist, an organizer’s sensibility, and an unwavering anti-capitalist perspective, Langelle’s inspiring photography simultaneously zooms in on the soul of the struggle, and zooms out to take us beyond the image in front of us, willing us to address the root causes at the heart of the matter, rather than offer band-aid solutions,” Choudry added.

On the question of photojournalism and objectivity, Langelle says, “I take my responsibility as a concerned photographer very seriously.  Great journalists like John Reed and photojournalists like Robert Capa told the truth, and did not worry about being ‘objective.’  The myth of objective journalism, where the truth must be counterbalanced by the untruth has no place in a just society, especially when corporate propaganda already dominates so much of the media.”

Many of the campaigns documented in this photo essay had successful outcomes, including the campaign that stopped the killing of dolphins by industrial tuna fishing, the succession of direct actions that helped rescind the death warrant for political prisoner Mumia Abu-Jamal, a moratorium won against the aerial spraying of toxic herbicides on Vermont forests, the permanent cessation of all logging on Illinois state forests, and the campaign that stopped construction of hydroelectric dams on Cree territory near James Bay, Quebec.

The photos were taken all around the world, from the US, to Tasmania, Australia, to England, as well as on Indigenous Peoples’ territories in northern Quebec, Chiapas, Mexico and the remote reaches of Nicaragua.

Author and poet Diana Anholt explained what sets Langelle’s photos apart. “Few photographers possess the ability to convey the essence of a place with the authority and finesse of Orin Langelle. When I set out in search of an image for the cover of  ‘Lives of Straw,’ my collection of poetry which deals with the struggle for survival in Mexico—survival in every sense of that word— physical, spiritual and economic— it was all I could do to locate an image which didn’t include a piñata, a burro, mariachis…  By sheer accident I stumbled on the one that summed up the entire Mexican experience I was attempting to convey: A man bearing a burden. The graffiti on the wall behind him bore a political message: Libertad a Presuntos Zapatistas. (Liberty to Suspected Zapatistas)

“This was the Mexico I know and write about and Orin Langelle had captured more than an evocative image of the country.  He had captured its soul.”

Most recently Langelle became a part of the Critical Information Collective as a means to not only distribute his own historical photographs more widely, but to collect images from photographers covering struggles all over the world. Regarding his joining the collective, CIC Co-Director Ronnie Hall said, “Critical Information Collective is delighted to be joined by Orin Langelle, seasoned photojournalist and activist. He brings a wealth of communications and campaign skills and experience to the collective, and will help to launch and develop our new environmental and social justice image library.”

Orin Langelle may not be a combat photographer, but since 1972 he has risked his safety and well being to cover the war on communities and the land, sometimes in remote territories deep in the jungle or in communities imminently threatened by military or paramilitary invasion. There are few people who have been as dedicated to the movement for change or for as long as Orin Langelle. The photos in his new essay provide a powerful window into that lifetime of work.