On the occasion of International Forest Day, 21 March 2014, the Global Forest Coalition [1] in collaboration with Critical Information Collective [2] Global Justice Ecology Project [3] and Langelle Photography [4]  launched an exhibition [5] that demonstrates the impacts of so-called ‘green land grabbing’ on local communities.

Green land grabbing is a relatively new phenomenon facilitated by forest carbon offset projects and other initiatives (forest carbon projects aim to use trees’ and plants’ ability to absorb carbon dioxide from the atmosphere as a way of compensating for greenhouse gas emissions in industrialized countries).

The exhibition shows how forest carbon offset projects in Africa, Asia and Meso-America have triggered violent evictions and caused fear and uncertainty amongst forest-dependent communities, with women and children being particularly impacted.

The exhibition ““Defending Community Rights against Green Land Grabbing” was shown at the climate talks in Bonn, Germany, in June 2014 and the Conference of the Parties to the Convention on Biological Diversity in Pyeongchang, South Korea in October 2014.

(More information between exhibition panels below – You can download the complete exhibition in print quality format, either A4 or A3 size, by clicking on the links at the Critical Information Collective site) 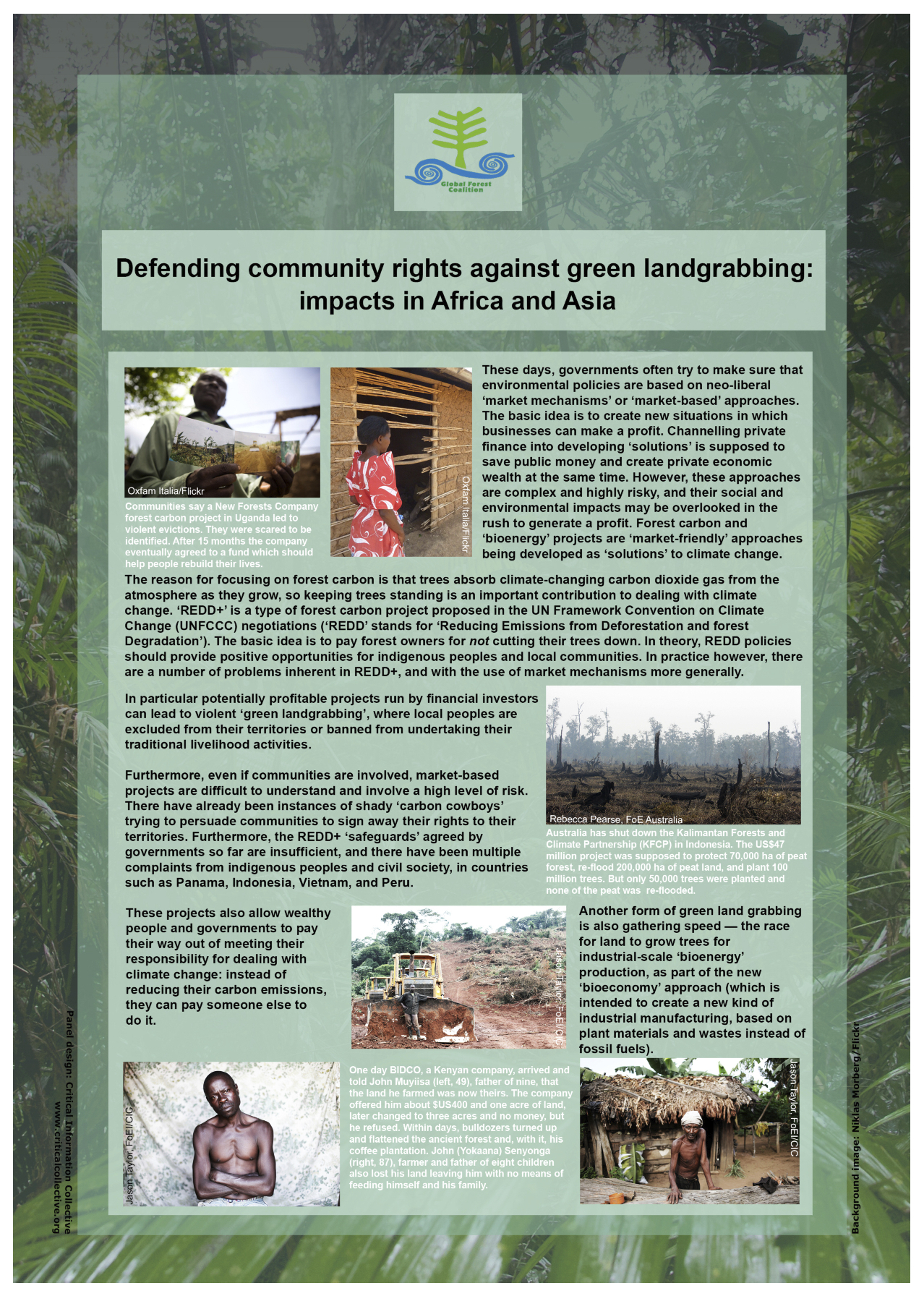 “By increasing the economic value of forests, forest carbon projects are ramping up land grabbing, especially in forests inhabited by Indigenous Peoples and other marginalized groups whose land tenure rights aren’t recognized” states Ronnie Hall of Critical Information Collective, one of the designers of the exhibition. “By bringing these stories and images together we hope to convey that this is a very real and urgent problem that families and communities around the world are having to deal with.” 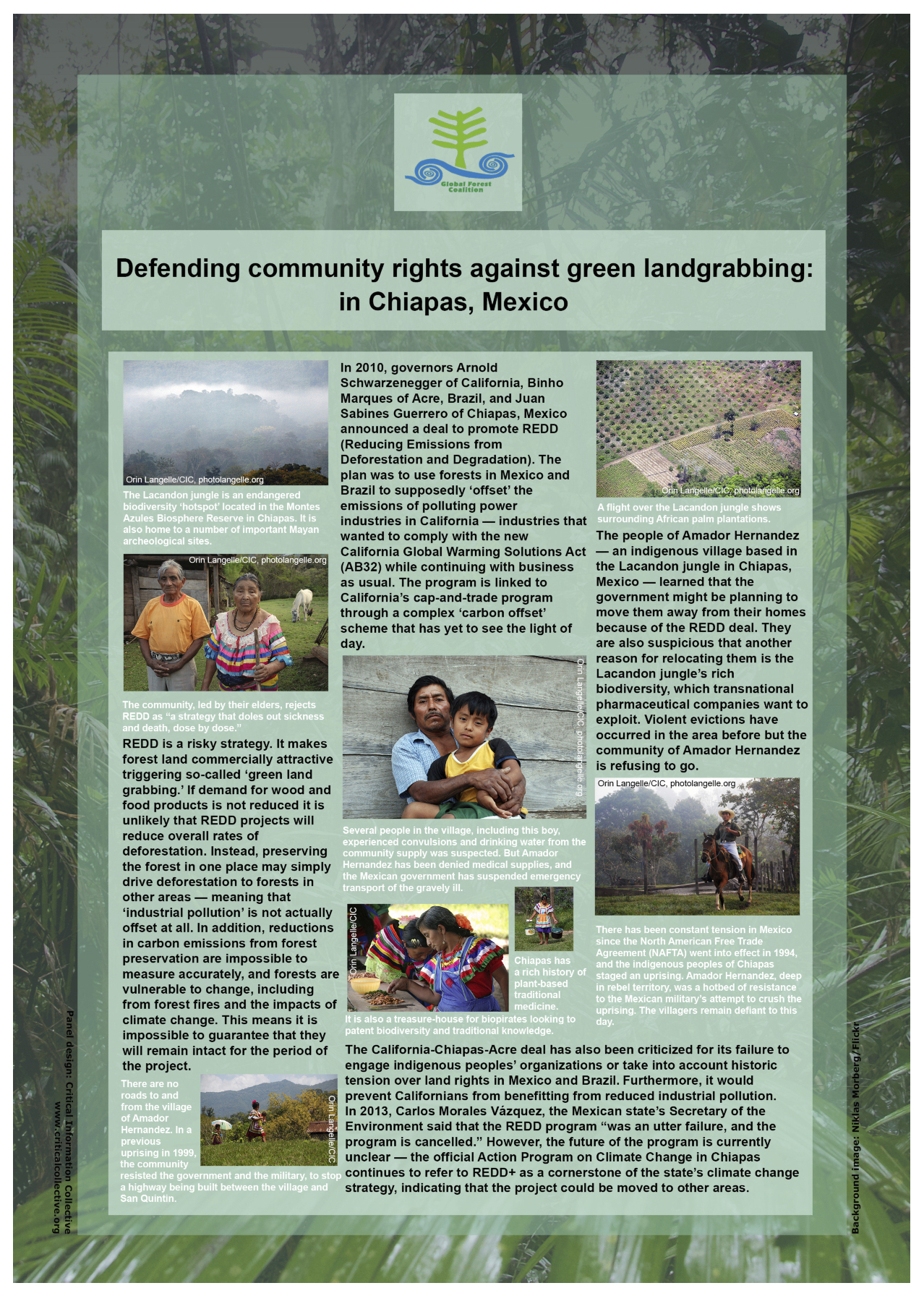 The exhibition demonstrates how local communities in industrialized countries — like the community in Richmond, California — can be negatively impacted by these offset projects as well. “By allowing major carbon emitters like Chevron to buy offsets instead of eliminating their pollution — as proposed in California’s cap and trade legislation — some of the most marginalized communities in the North have to continue to suffer the devastating toxic effects of industrial pollution in their neighborhoods” highlights photographer Orin Langelle, of Global Justice Ecology Project and Critical Information Collective. 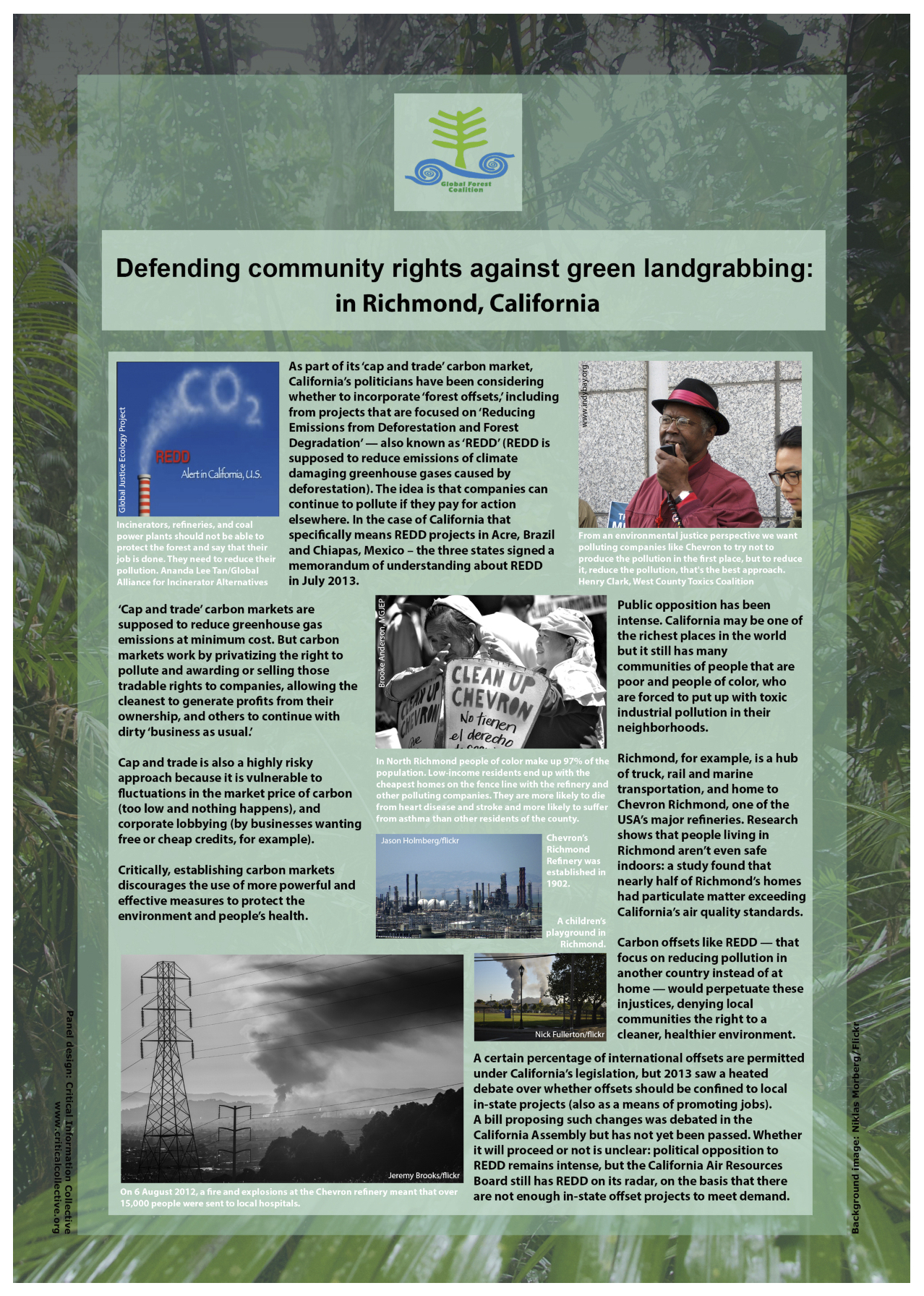 There are alternatives to forest carbon projects. “All over the world one can find territories and areas conserved by Indigenous Peoples and local communities (ICCAs) [6], and these are now recognized as playing a key role in forest conservation, including in countries like Mexico and Brazil” said Simone Lovera, executive director of the Global Forest Coalition. “Instead of financializing forests through offset markets, governments should urgently recognize the rights of Indigenous Peoples and local communities regarding their forests, which has proven to be a highly effective strategy for conserving those forests.” 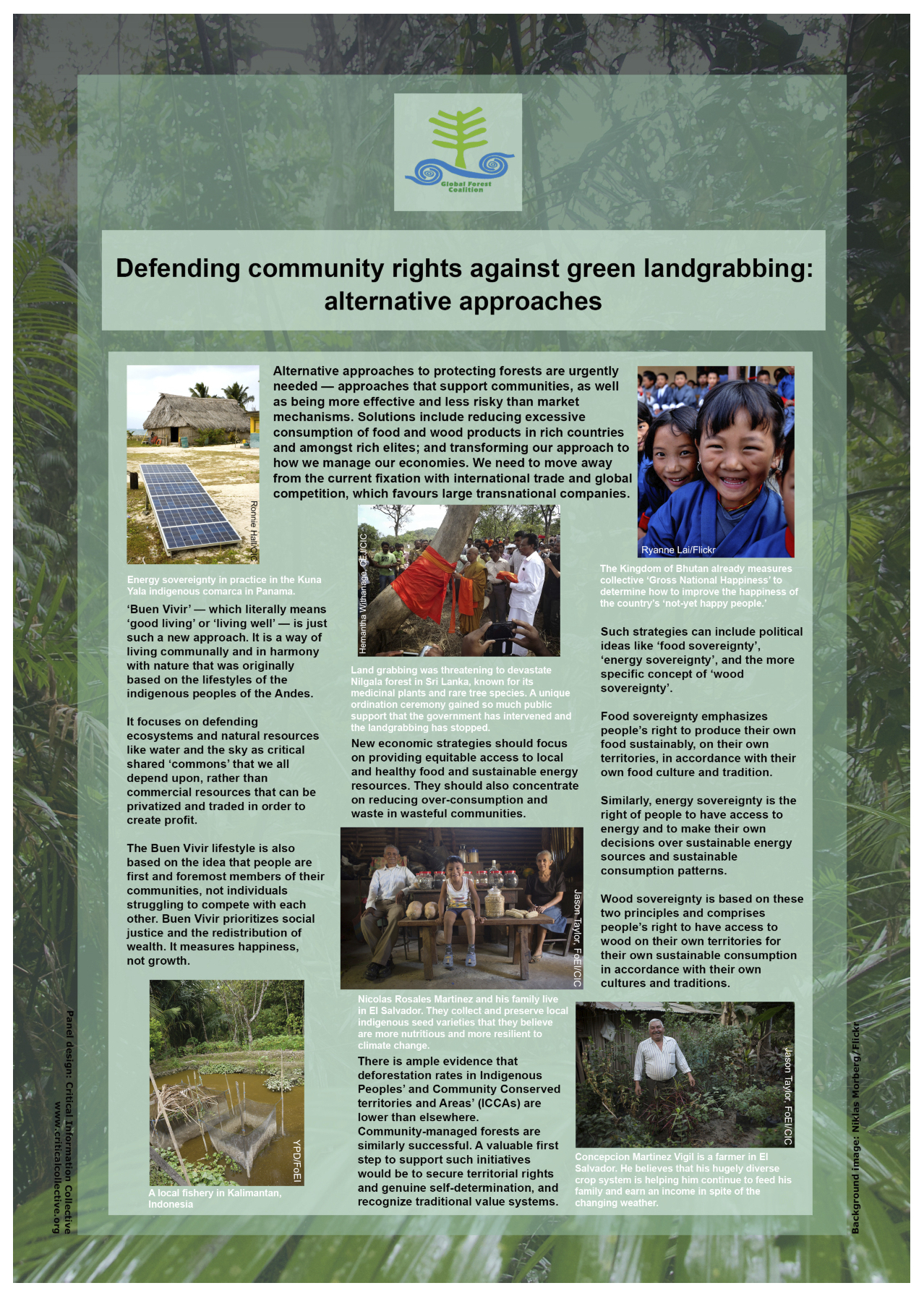 [4] Langelle Photography uses the power of photojournalism to expose social and ecological injustice.

[5] The exhibition “Defending Community Rights against Green Land Grabbing” can be visited online at https://www.criticalcollective.org  It will be shown, amongst others, at the upcoming climate talks in Bonn, Germany, in June 2014 and the Conference of the Parties to the Convention on Biological Diversity in Pyeongchang, South Korea in October 2014.