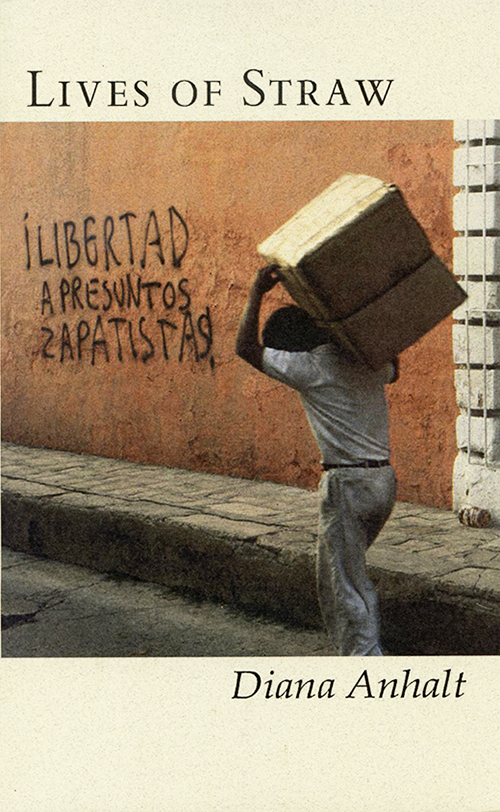 I received in the mail today Diana Anhalt’s newest poetry chapbook, LIVES OF STRAW, that uses my cover photograph of a street scene in San Cristobal de Las Casas, Chiapas, Mexico, which I shot in 1996.

Diana and I have become friends.  We’ve never met face-to-face, but have communicated numerous times via internet and phone after I received this request from Diana on 8 September 2013:

I am interested in using Street scene in San Cristobal de Las Casas, Chiapas, Mexico for my book cover because of its resonance, its ability to say so much. I am the author of a small book of poems, “Lives of Straw,” to be released by Finishing Line Press about survival in Mexico—survival in every sense of that word—economic, physical, spiritual. (I lived in that country for 60 years.) What would be involved in acquiring the photo for one-time use? Thank you for your attention.
Diana Anhalt

I want to give a brief background on what may be Diana’s most read book published in 2001, A Gathering of Fugitives – American Political Expatriates in Mexico 1948 – 1965.  Diana is described on the back cover as coming “from a long line of wanderers which helps explain why practically everything she has published in Mexico and the United States deals with exile, expatriation and identity.”

She left the U.S. with her family when she was eight years old in 1950, fleeing to Mexico.  This was the time of McCarthyism and the House Un-American Activities Committee (HUAC); when it was dangerous to think, much less talk or write, about anything that could possibly be deemed radical.

Dr. Harvey Klehr from Emory University calls of A Gathering of Fugitives, “A fascinating exhumation of a little-known group of American communists – idealists, artists, spies and Hollywood types – who migrated to Mexican exile in the late 1940s and 1950s. Diana Anhalt tells their story – and her own – sympathetically but not uncritically.”

I’m honored that Ms. Anhalt chose my photo for the cover of LIVES OF STRAW.  Her chapbook of poetry is available at www.finishinglinepress.com.

And from the last paragraph of Disappearing Act in LIVES OF STRAW, that resonates so clearly to me, she writes –

One day will someone say:

That woman in the photo

looks familiar.  Or will I have

wave out some speeding car’s