The following photos were on display in Bali, Indonesia. They were exhibited at the People’s Global Camp against WTO in Denpasar. The People’s Global Camp (PGC) was a counterpoint to the 9th Ministerial Meeting of the World Trade Organization (WTO) in Bali, Indonesia on Dec. 3-6, 2013. The Camp served as a a hub for people’s initiatives and action against WTO and neoliberal globalization.

This year marks the 10th anniversary since Korean farmer Lee Kyung Hae killed himself on the fences surrounding the WTO Cancún Ministerial in 2003 wearing a sign that said WTO Kills Farmers.  Lee Kyung said, moments before taking his own life – “Don’t worry about me, just struggle your hardest.”  Lee Kyung Hae was a member of La Via Campesina, the International Peasant’s Movement.  [Langelle’s first seven photographs are from he WTO Cancún Ministerial in 2003.]

Special thanks to the Asia Pacific Research Network for producing this exhibit entitled, Peoples’ Struggle Against the WTO and Neoliberal Globalization. 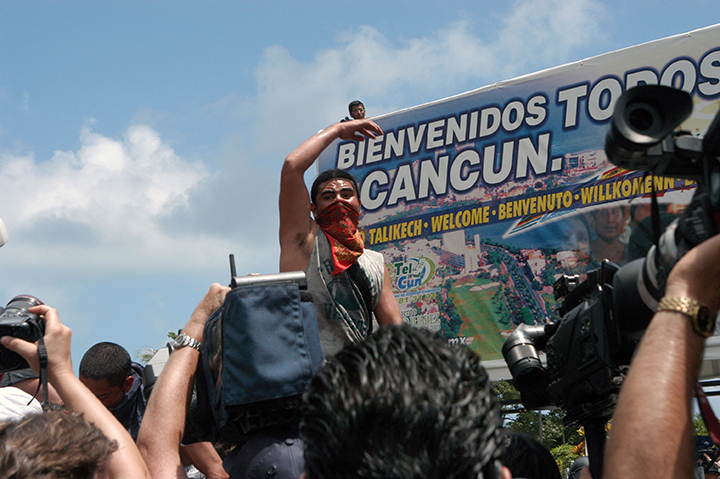 Protester “welcomes” and urges onward Indigenous peoples, labor and students who joined thousands of protesters, the majority farmers, as they marched on the WTO Convention Center in Cancún, on September 10, 2003. 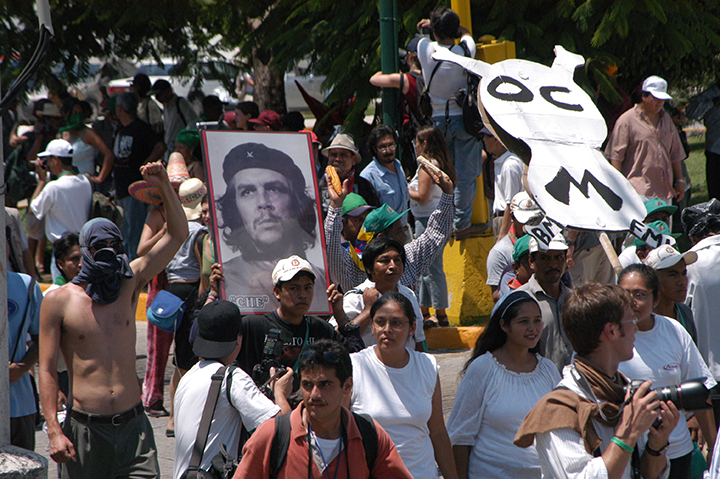 Image of “Che” in the march on the WTO Convention Center in Cancún, on September 10, 2003. 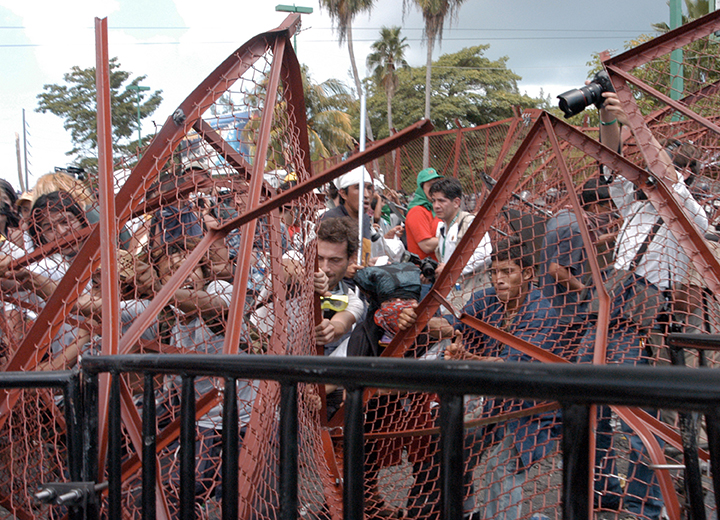 Protesters tear down sections of wire barricades at the World Trade Organization (WTO) meeting in Cancún, Mexico. Moments earlier a South Korean farmer, Lee Kyoung Hae, 56 years old and father of two, committed suicide by plunging a knife into his heart while atop of one of the wire barricades.   “The WTO Kills Farmers” became the dominant message of these protests. Indigenous peoples, labor and students joined thousands of protesters, the majority farmers, as they marched on the WTO Convention Center in Cancún, on September 10, 2003.  Police and barricades stopped the march ironically at Kilometer Zero on the map—in fact many kilometers from their destination.  The demonstrators later referred to Kilometer Zero as ‘ground zero.’

So far the WTO never fully recovered from the shut down of its ministerial in Seattle in 1999 nor the subsequent mass protests in Cancún in 2003.  Their negotiations on agricultural trade were never able to move forward due to the unified opposition of developing nations, whose positions were supported by the protesters. 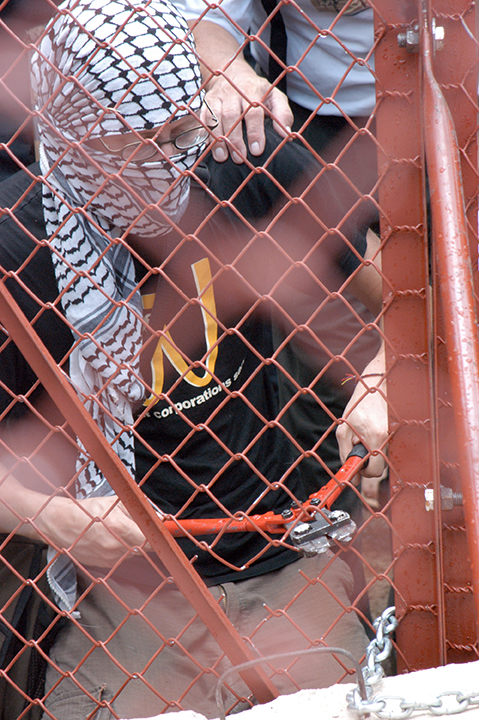 A protester uses bolt-cutters on the wire barricades during demonstrations against the World Trade Organization (WTO) meeting in Cancún, Mexico. (2003) 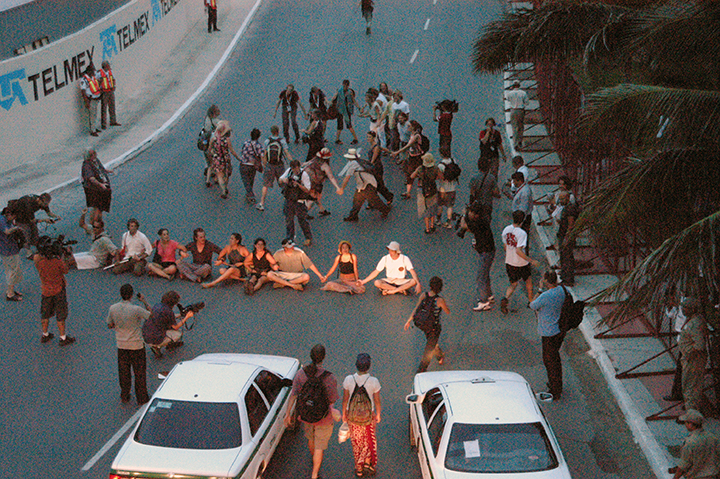 Protesters jumped over barricades in the dusk to form a street blockade at the WTO Convention Center in Cancún.  The blockade tied up traffic for hours before police could move away the demonstrators. 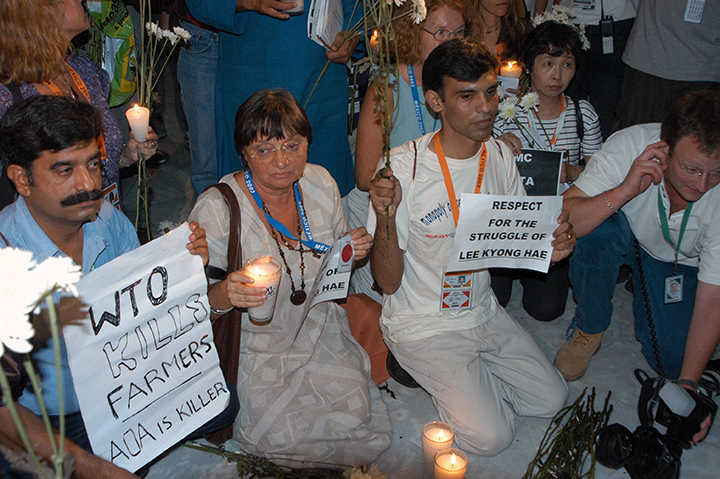 This candlelight protest was one of the many that occurred inside the Convention Center, helping disrupt the official WTO proceedings in Cancún. 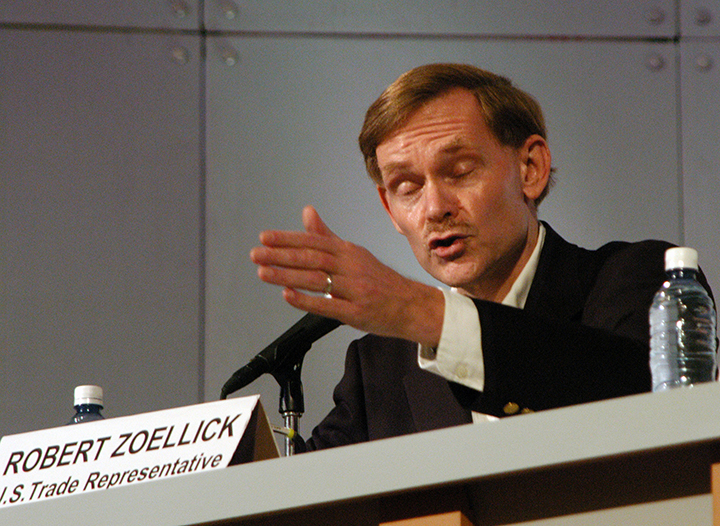 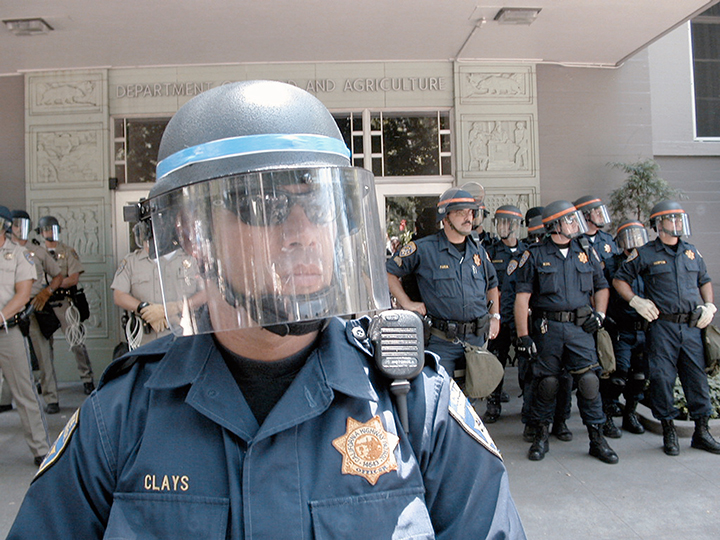 Police on guard in Sacramento, CA as protests erupt during an international conference on agricultural technology in June 2003. The U.S. invited agriculture and trade ministers from 180 countries to showcase U.S. agri-business and attempted to extract support for U.S. policies on agricultural subsidies, trade and biotechnology in the build up to the WTO meetings in Cancún, Mexico. 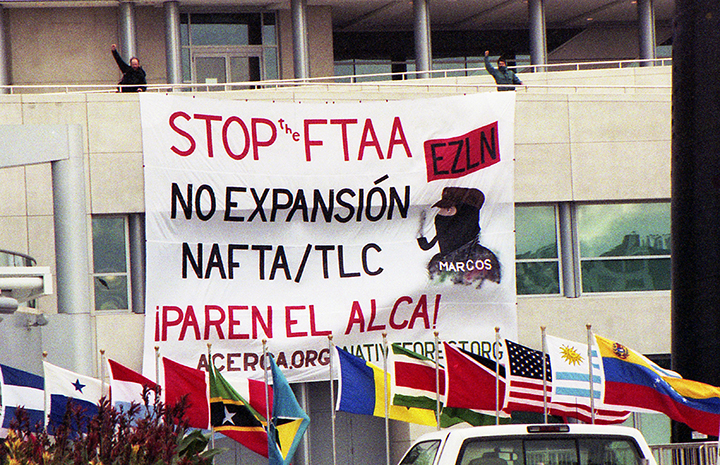 Banner on the Toronto Convention Center (Canada) where trade representatives of the Free Trade Area of the Americas had one of their first meetings.  Protesters hung the banner only a few weeks prior to the Battle of Seattle against the WTO in Seattle (U.S.).  One of the protesters called it the one of the first shots over the capitalist bow prior to the WTO meeting. (1999) 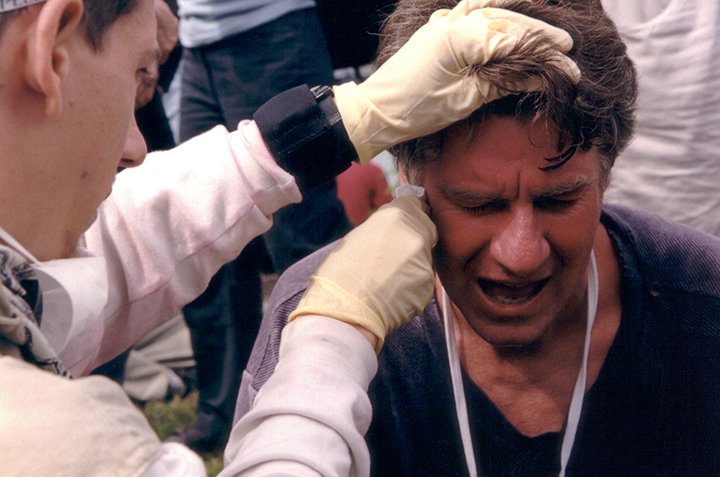 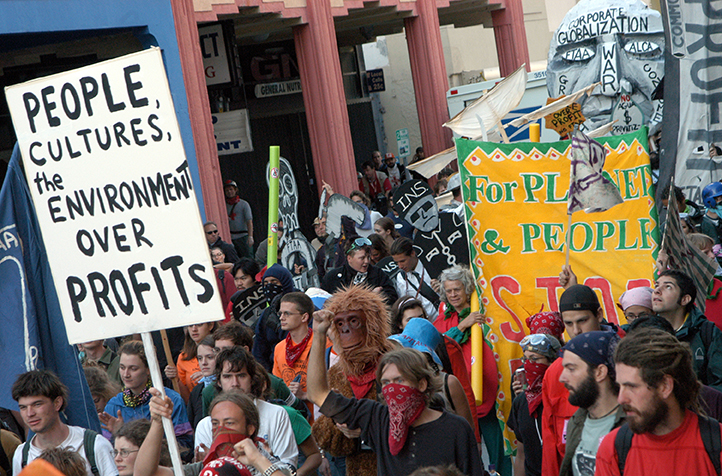 In Miami, FL, an un-permitted march heads toward the fenced off restricted area where the trade ministers of 34 nations were meeting to discuss the Free Trade Area of the Americas.  (2003) 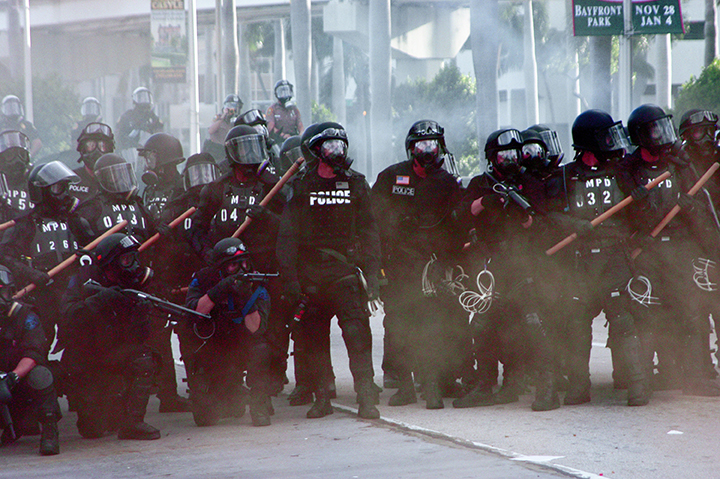 Police in a cloud of tear gas prepare to fire rubber bullets on protesters in Miami, FL after an estimated 20,000 or more marched against the Free Trade Area of the Americas (FTAA). Police used tear gas, rubber bullets, electronic tasers, pepper spray and other less-than-lethal weapons to attack the protesters, including a large labor contingent.  Many protesters and bystanders were injured.  At the time, trade ministers from 34 countries were in Miami to negotiate the FTAA, a new neoliberal trade agreement that would stretch from Alaska to Chile.  (2003) 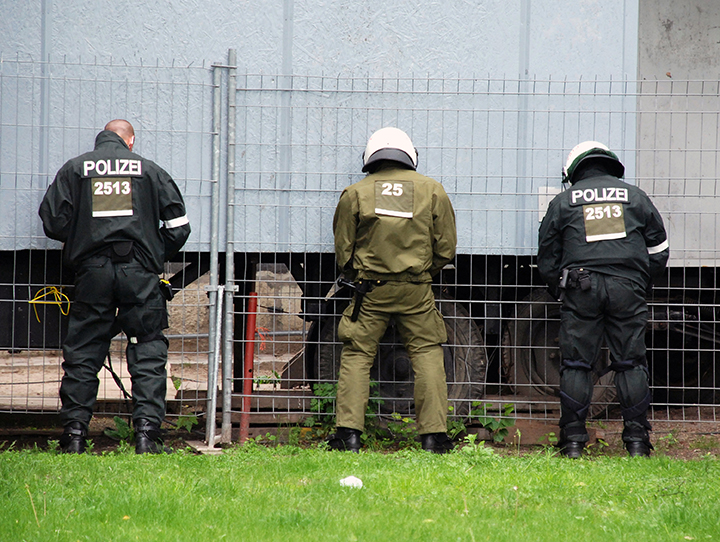 Police relieve themselves in public at demonstrations in Rostock, Germany during a meeting of the G8–the world’s eight richest nations–in nearby Heiligendamm, Germany. (2007) 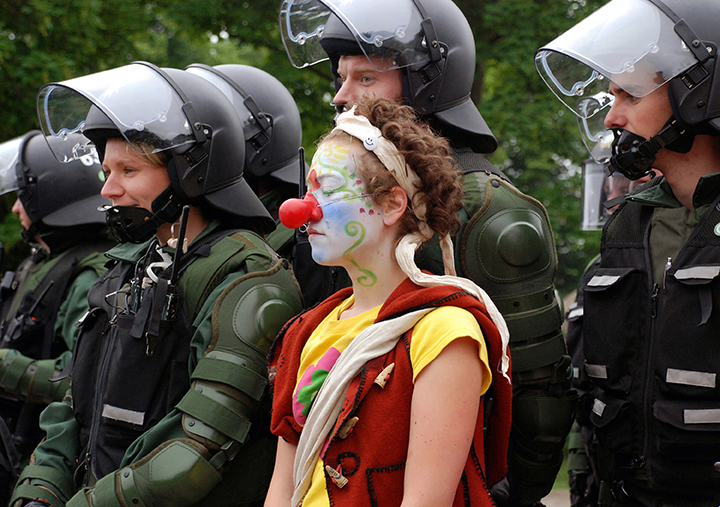 This clown in front of riot police was one of 80,000 demonstrators in Rostock, Germany protesting a meeting of the G8–the world’s eight richest nations–in Heiligendamm, Germany near Rostock in early June 2007. Shortly after this scene, police used water cannons to spray the crowd with water mixed with tear gas.

The G8 leaders held their summit behind a 12 km fence topped with razor and barbed wire with their only access into meetings either by helicopter or boat as over ten thousand protesters blockaded all main roads and train tracks into Heiligendamm.  (2007) 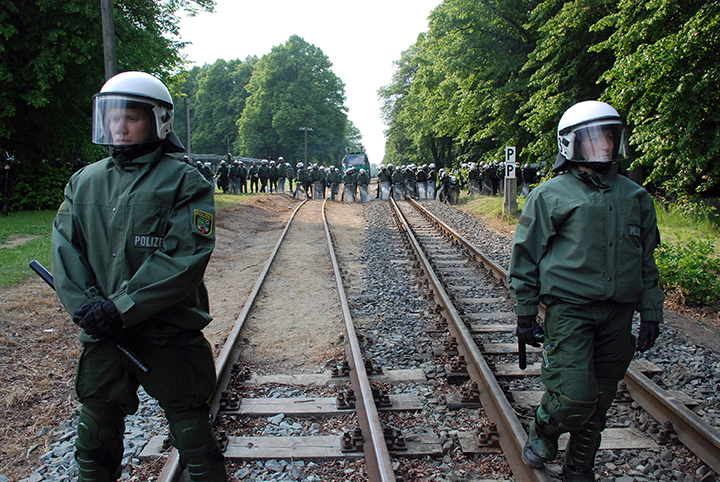 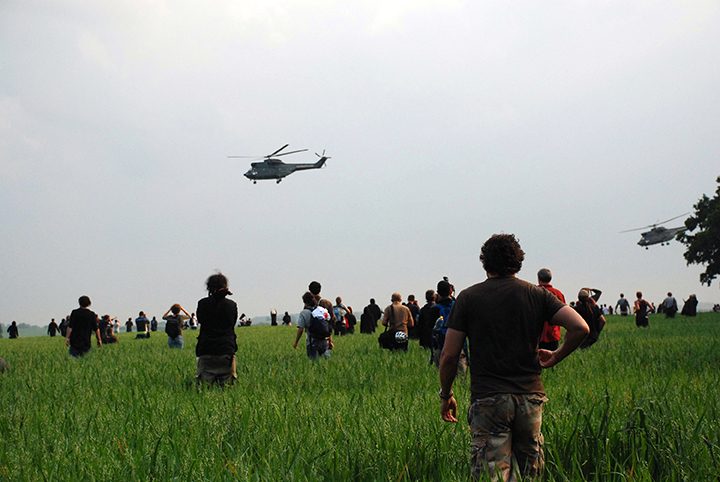 Helicopters fly over a field of protesters during the G8 in Germany. (2007) 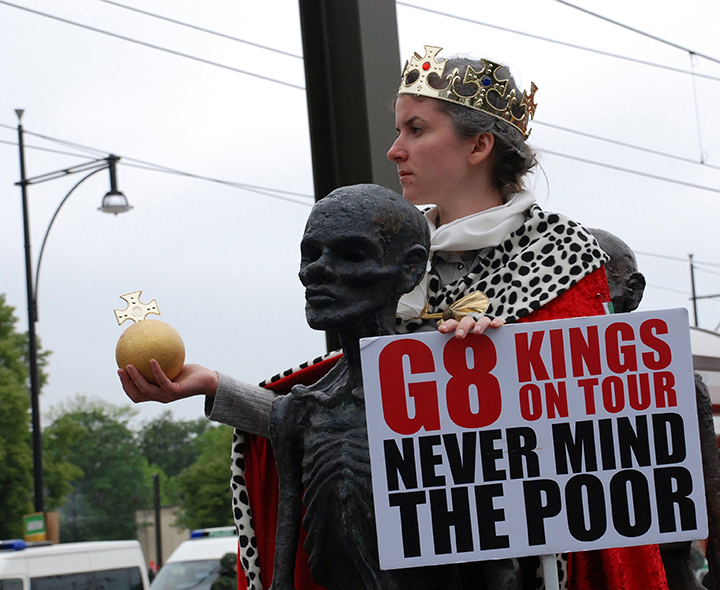 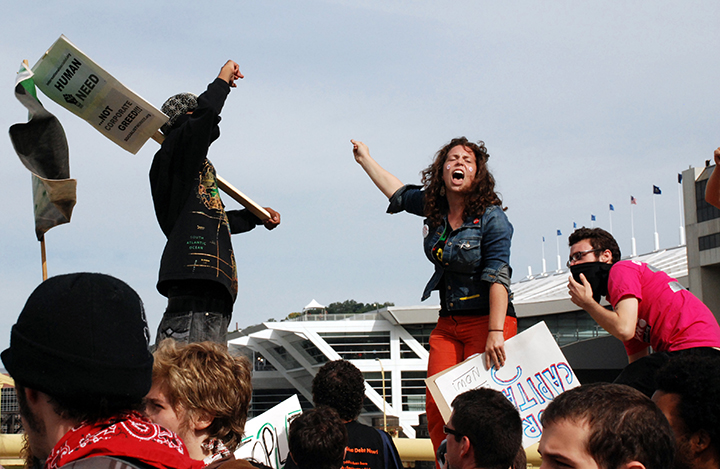 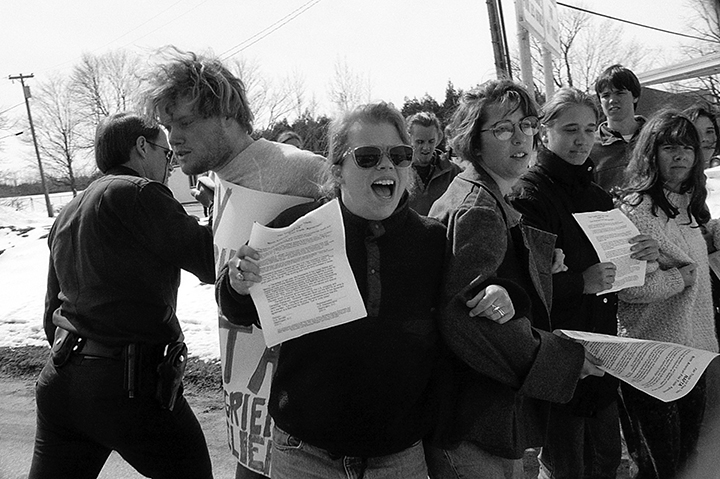 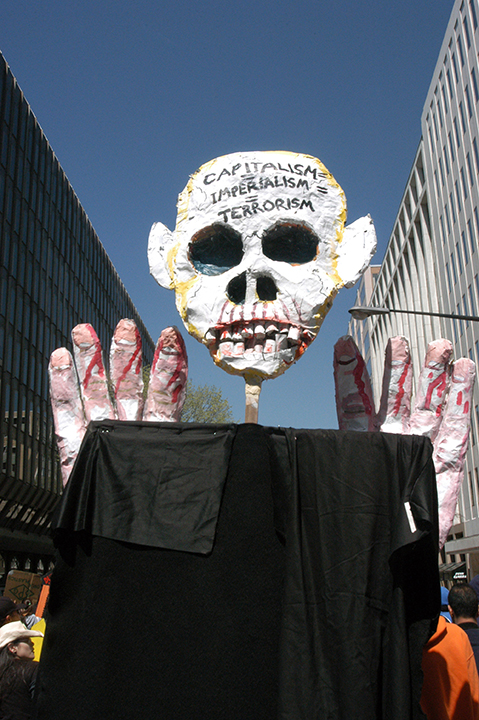 Puppet in the streets of Washington, DC during a World Bank protest. 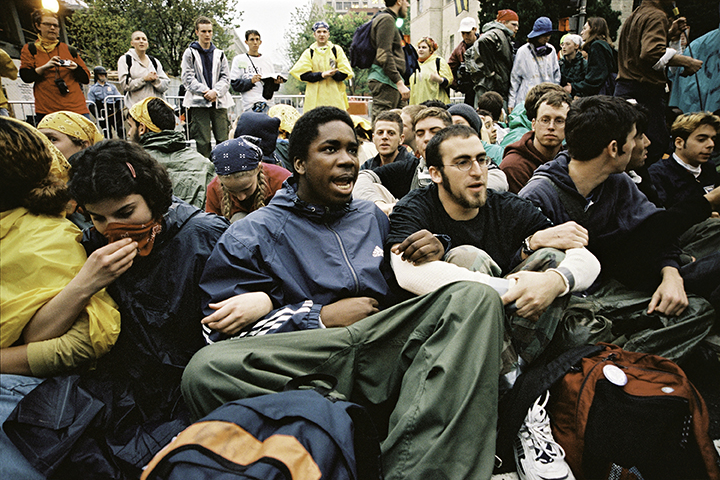 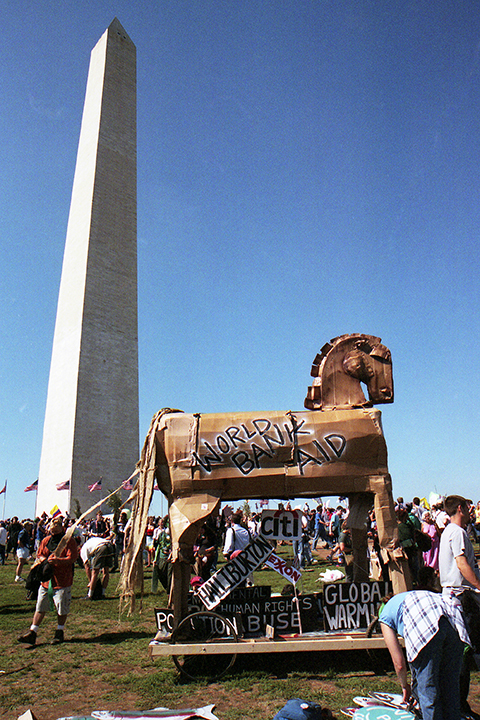 Trojan Horse in front of the Washington Monument in Washington, DC during a protest against the World Bank. 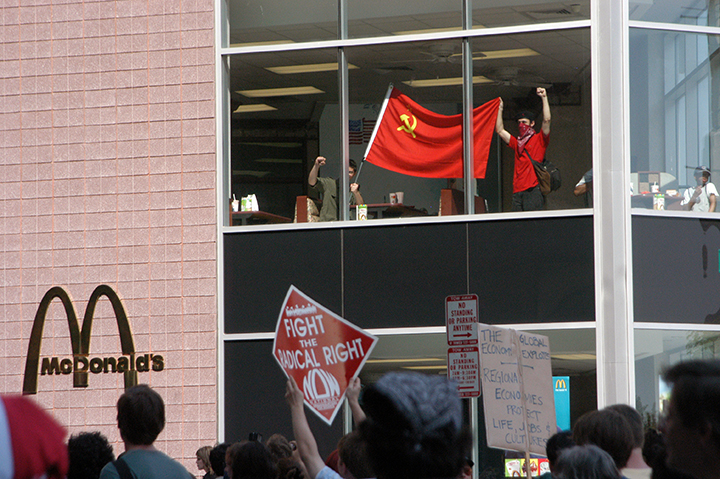 After the march to the World Bank on April 24 in Washington, DC some in the crowd went into McDonald’s for a flag waving before joining the rally against the World Bank/IMF at Franklin Square Park. (2004) 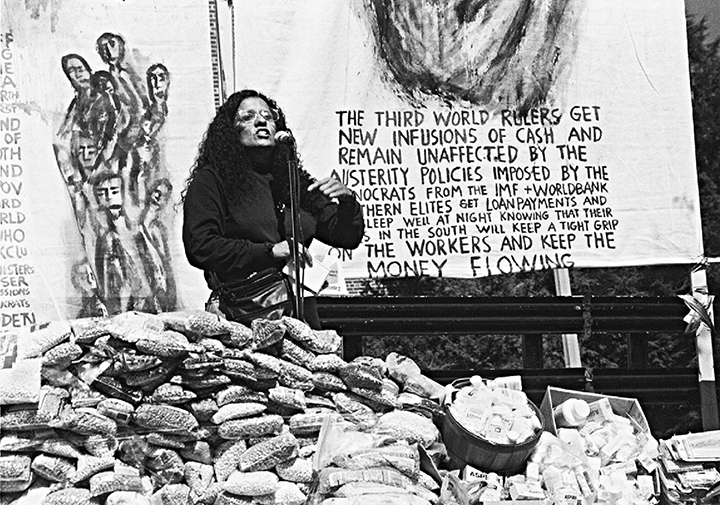 Cecilia Rodriguez, US representative of the EZLN, speaks at a rally protesting the World Bank’s 50th anniversary in Washington, DC and Mexican President Zedillo’s visit to the US.  In her speech she demanded suspension of US military and technical assistance to Mexico for any purpose until human rights violations cease. 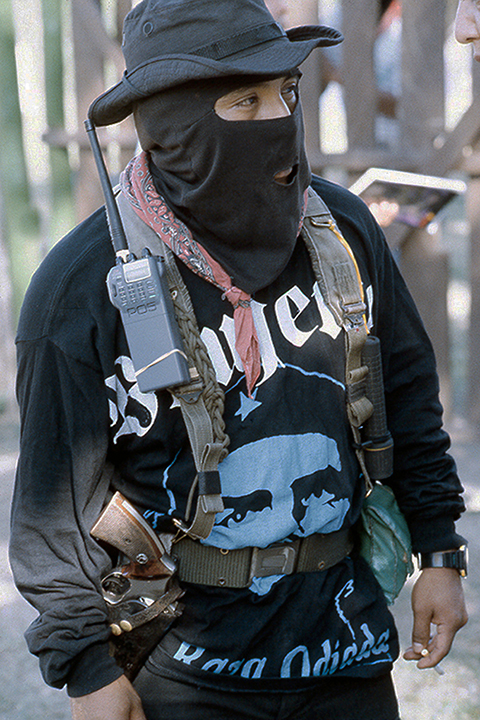 A Zapatista (EZLN) Comandante wearing a Che Guevara shirt in La Realidad, Chiapas. When the North American Free Trade Agreement went into effect on 1 January 1994, the Indigenous Peoples of Chiapas staged an uprising, denouncing NAFTA as a “death sentence” for Indigenous Peoples of Mexico.  (1996) 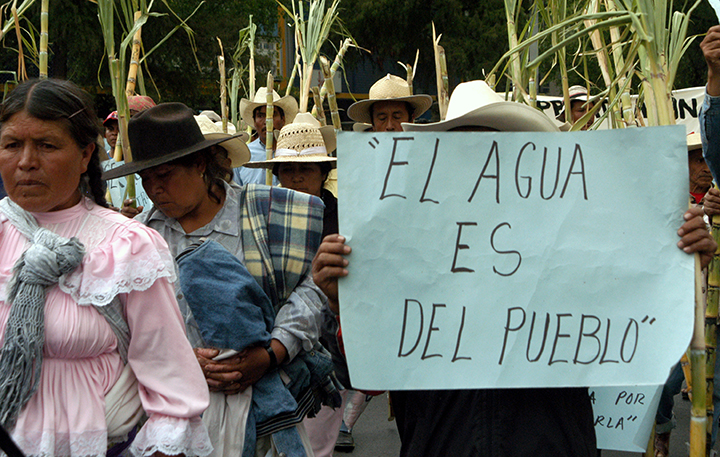 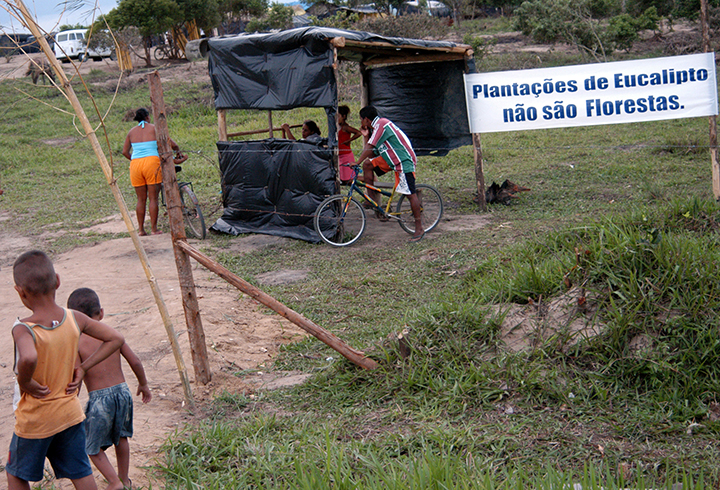 Plantations of Eucalyptus are not Forests” proclaims the sign at the entrance of the MST (Movimento dos Trabalhadores Rurais Sem Terra – Landless Workers Movement) encampment.  The MST here took over portion of a plantation owned by timber company Aracruz Cellulose, removed the non-native trees and erected their camp, complete with a well, community space and an elaborate system on non-hierarchical decision making.  The camp was named Galdino dos Santos, for an indigenous chief who was murdered two years earlier in a racist attack.  (Brazil 2005)

NOTE: Special thanks to IBON International and the Peoples’ Movement on Climate Change for all of the work in encouraging this exhibit and  for their work on the The Warsaw, Poland Exhibit at the UN Climate Conference installation.