As of Tuesday, 30 August 2011, there were still thirteen towns in the U.S. state of Vermont that were completely cut off from the outside world due to the torrential rains of Hurricane Irene.  This was because roads like Route 100, which runs north and south through the state, sustained catastrophic damage to its culverts and bridges for many miles.    In all, over 200 roads across the state were closed due to wash outs from the heavy rains that pelted the state for nearly twenty-four hours on Sunday, August 28. 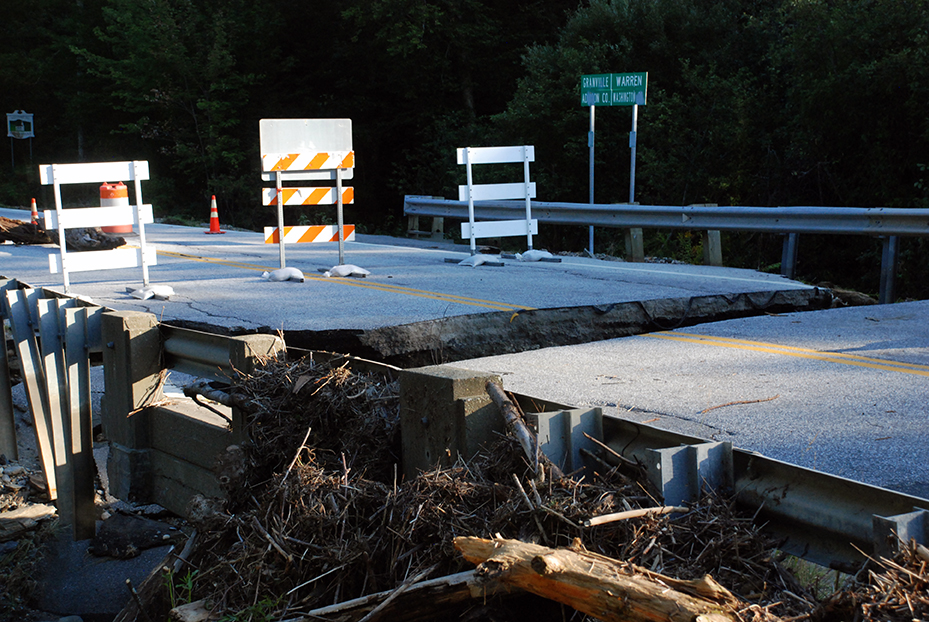 Route 100–this and other washed out bridges and culverts cut off the town of Granville, VT from the outside world

Orin Langelle and I toured a portion of our home state of Vermont on Tuesday, 30 August to witness and document some of the destruction that Hurricane Irene had left in its wake.  Though it was downgraded to a “tropical storm” by the time it reached Vermont, its torrential rains wreaked havoc around the state.  Where we live, we had been quite fortunate and only lost electricity for twenty-three hours or so.  Other parts of the state were far less lucky.  During our travels, however, we witnessed the resiliency of Vermonters, who tackled their own loss or the loss of their neighbors, not only with fortitude, but also with humor and a very New England-like matter of fact-ness. 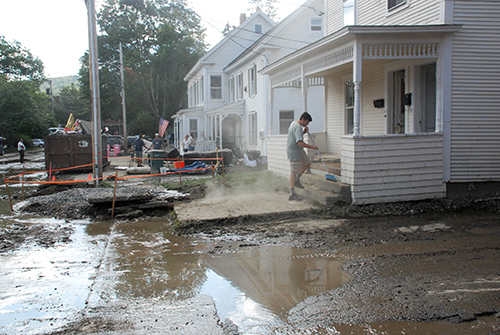 The post-flood clean up effort begins in Waterbury, VT (right)

Our journey began at Camp Johnson in Colchester, where the Vermont National Guard is stationed, to see what an official governmental response looked like.  Vermont’s National Guard sustained the heaviest losses per capita of any U.S. state during the occupation of Iraq.  Like many Vermont National Guardsmen, the young soldier we spoke with, Nathan Rivard of Enosburg Falls, explained that responding to the needs of his neighbors during disasters like Irene that was the reason he had joined the Guard.  The response to the storm was, he felt, the real story in Vermont. “It’s people helping people,” he explained.  “Not just the disaster, but how people respond after.” 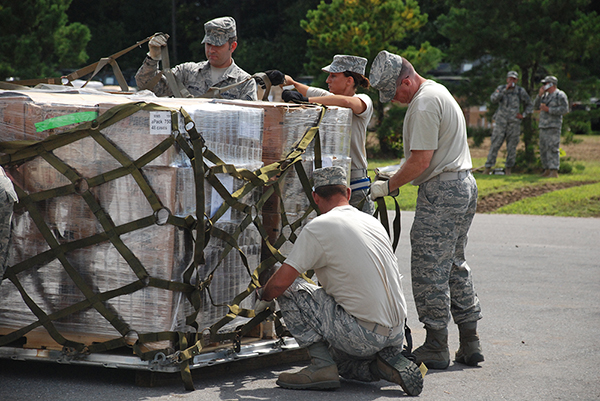 The Vermont National Guard responded while the storm was still raging to help Vermonters caught off guard by the inundation of water.  Before the sun was up on Tuesday morning, thirty FEMA (Federal Emergency Management Agency) tractor-trailers had arrived at the National Guard’s Camp Johnson with water, ready to eat meals, blankets, cots and other supplies. 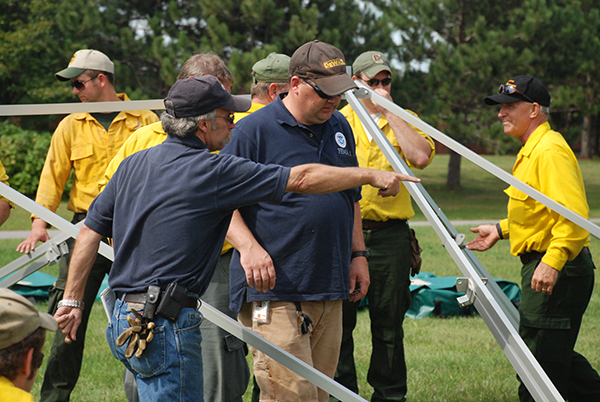 Because of the widespread road damage, however, getting the supplies to the people who need them has been extremely challenging.  With thirteen towns completely cut off from the outside world, National Guard helicopters have been almost the only way to get help in from the outside—either in the form of medical assistance or basic necessities like food and water. 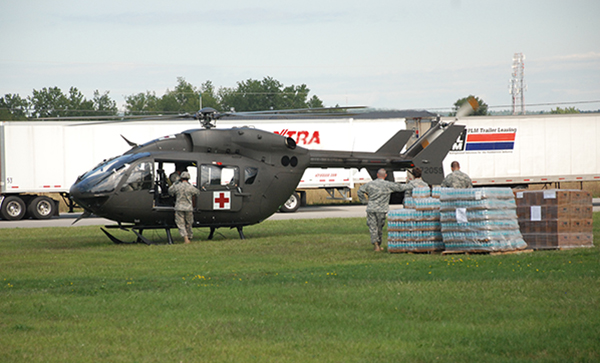 The ability of the government to help over the long term, however, is highly uncertain as the number of natural disasters in the U.S. over the past year has severely depleted FEMA’s budget.

[Note:  We asked the VT National Guard what communities in VT were receiving supplies from the Guard  so we could document distribution.  We were never given that information.]

The People Pull Together

From Camp Johnson, we headed to Waterbury, where Vermont’s state offices are located–and sustained heavy flood damage.  Waterbury was submerged under 10 feet or more of water when the Winooski River rose to record flood levels in minutes.  Even the state’s emergency management office succumbed to the flooding waters and had to relocate to Burlington—the state’s largest city.  When Irene hit Sunday, WDEV (Radio Vermont) stayed on the air all day and night with a generator, despite losing power from the grid and their internet connection.  While a commercial station, they remain dedicated to their community.  WDEV provided valuable information to residents about flooding damage and impassable roads during the disaster.  See Democracy Now! for an interview with the WDEV station owner. 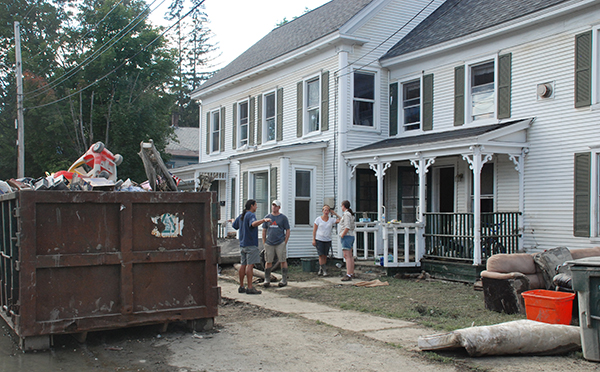 By Tuesday, volunteers and neighbors were pouring support into the community.

At the first house we came to on Elm Street, one of the streets where the flooding had been the worst, a group was sharing stories about the scene on Sunday.  Their front yard was heaped with ruined debris.  The home’s owner explained to us that the water in the apartment he rented downstairs had been up to his shoulders.  He explained that he wouldn’t even be able to start dealing with the damage to the house until the insurance agent arrived—which wouldn’t be until Friday.

But, he emphasized, the outpouring of support had been amazing.  Restaurants were donating food to the relief effort, and a bus full of “Youth Build” participants had arrived earlier that day to pitch in.  “If you didn’t know there was a flood, you’d think it was a block party,” he explained with a smile. 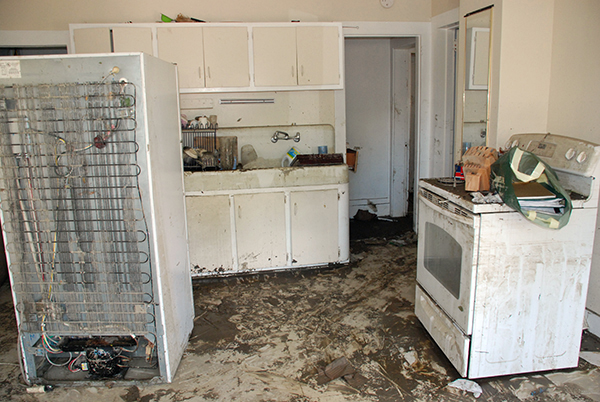 Inside the house, it was easy to see just how destructive the flood had been.  Kitchen appliances were covered in mud. In another room, mud covered baby toys littered the floor.  While at one end of what had presumably been the living room, a happy birthday sign still hung. 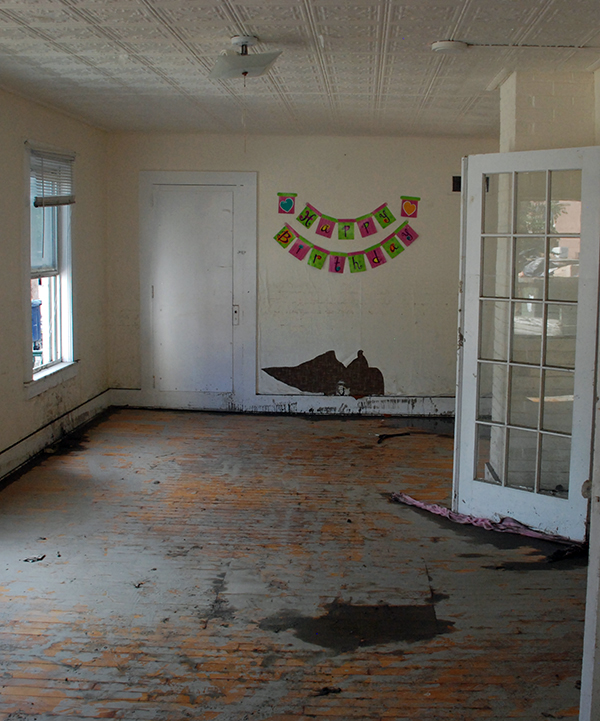 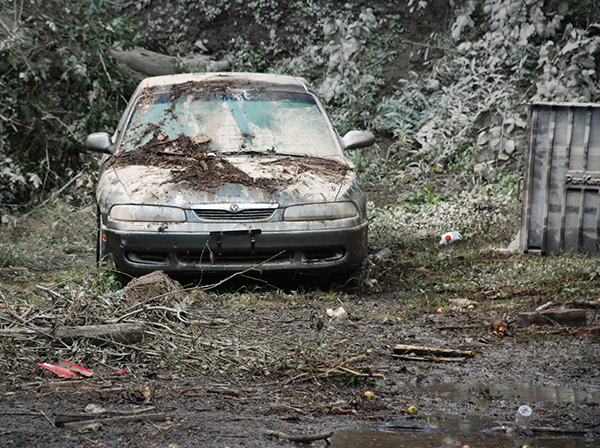 Cars did not fare well either during the flood 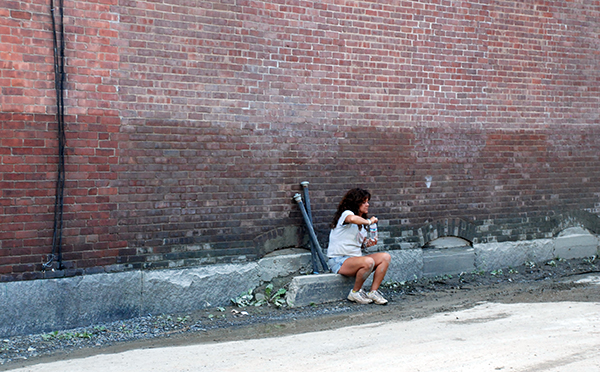 The high water mark from the flood in Waterbury

Around the corner on Randall Street, the activity of clearing homes of debris and salvaging what could be salvaged was still under way. 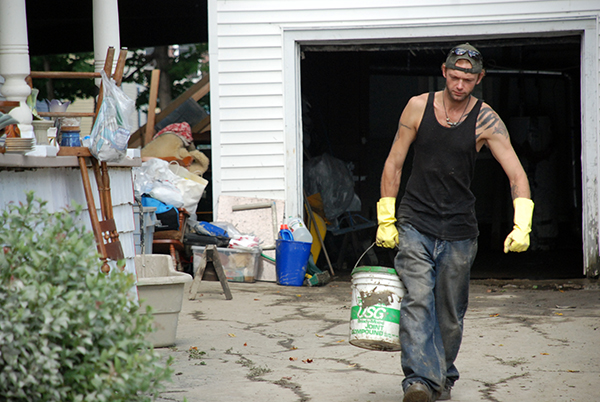 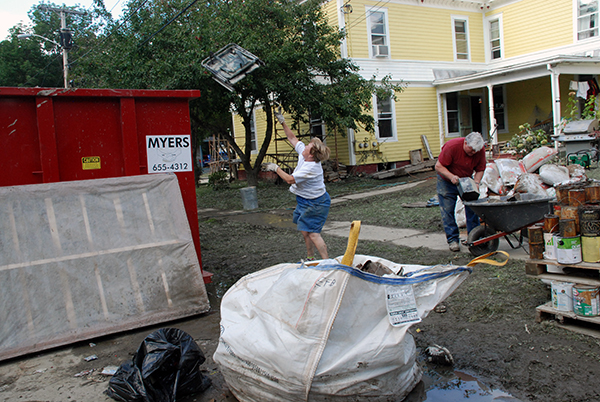 Huge dumpsters lined the street and debris was being piled according to type with electronics in one pile, hazardous materials (mostly paint, stain and household chemicals) in another, and everything else going in the dumpsters. 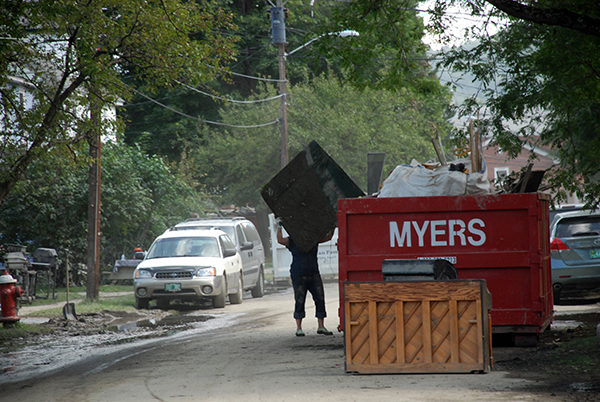 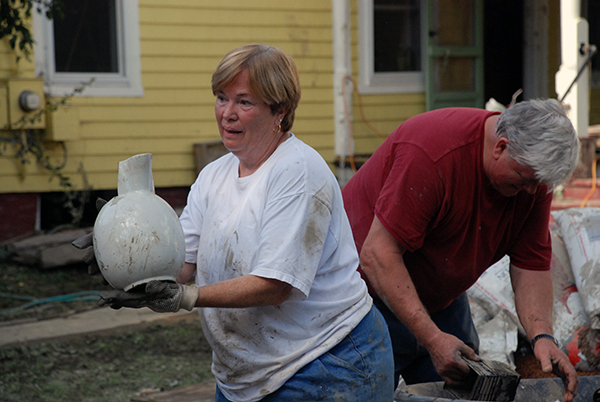 We came across one woman who picked up a white jug and sighed, “this was an antique,” as she poured muddy water out of a gaping hole in its side.  “Oh well,” she said.  “It’s just stuff, right?” then chucked it into the dumpster.  “Bye.”  The loss however was clearly overwhelming. 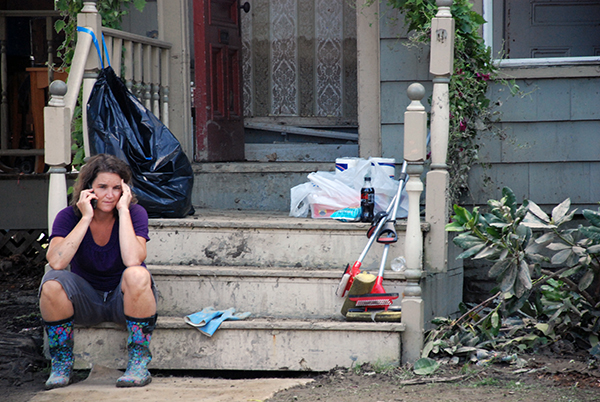 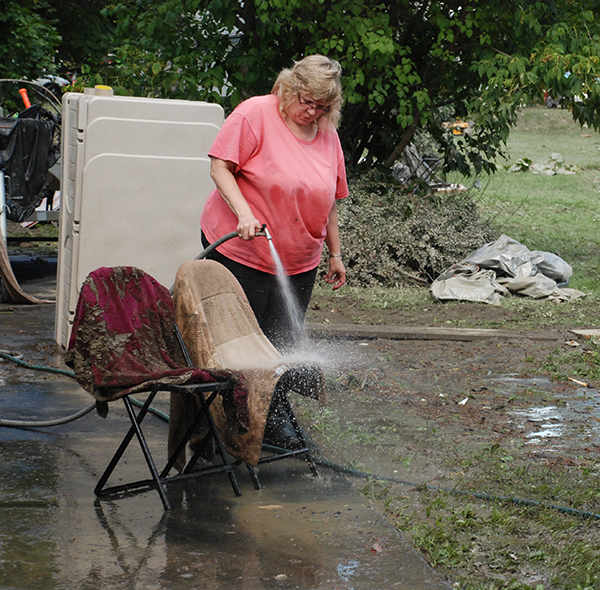 Others got to work cleaning what could be cleaned 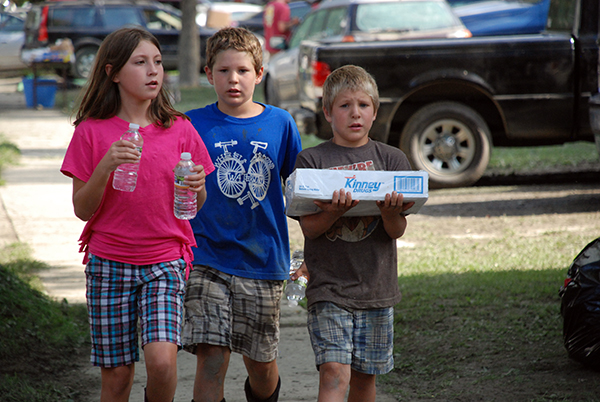 Coming up the road we encountered three intrepid children, helping out the best they could by giving out bottles of water.  They were very serious about their job, asking everyone they met if they wanted something to drink. 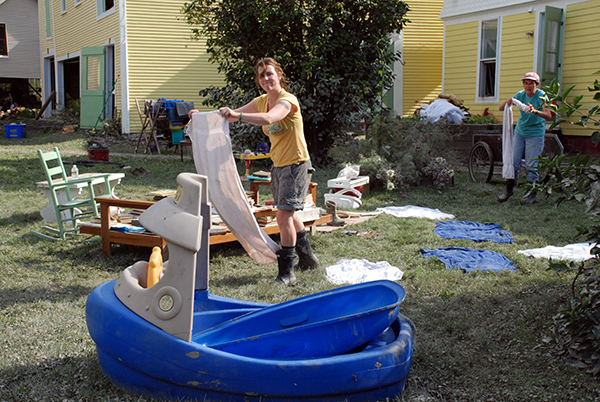 Among the ruins were tarps laid out with items that had been salvaged and washed, drying in the sun.  Many people managed to tackle the mess with a positive attitude. 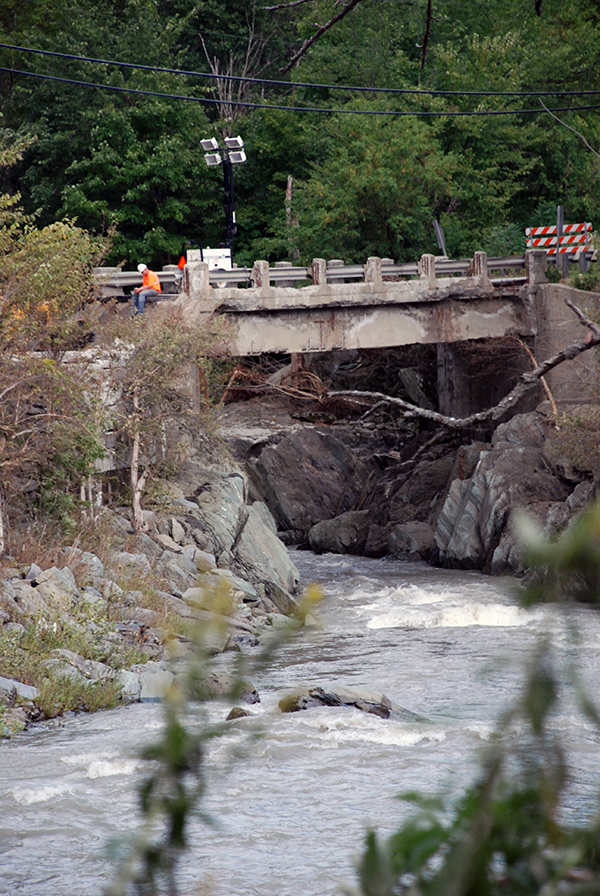 Bridge over the Mad River, severely damaged by the flood

From Waterbury, we headed down Route 100—one of the hardest hit roads in the state. Not far down the road, we came to Moretown, were the Mad River had lived up to its name. 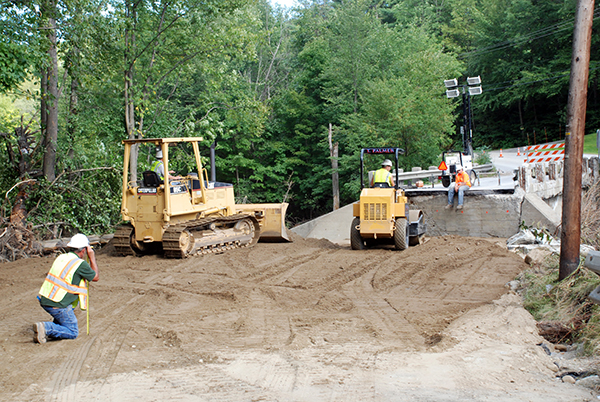 Workers repair the bridge over Route 100B in Moretown 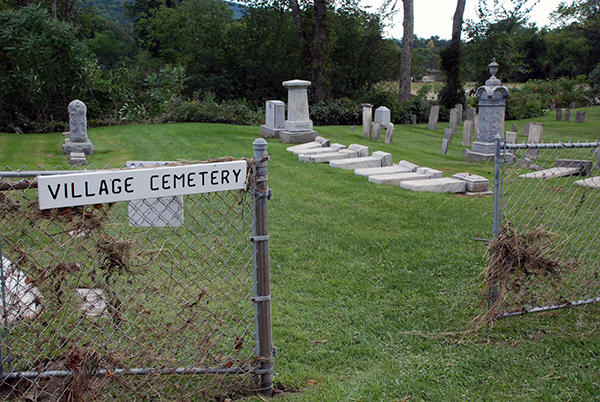 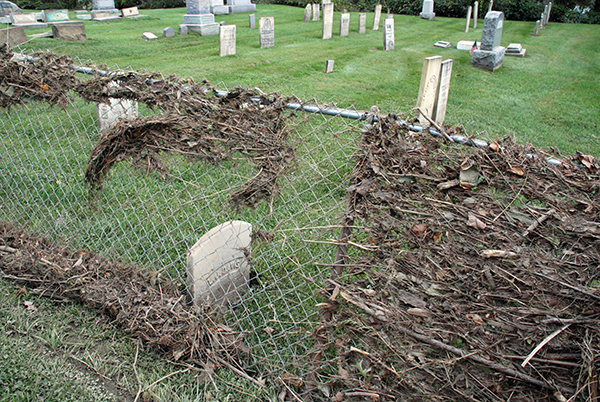 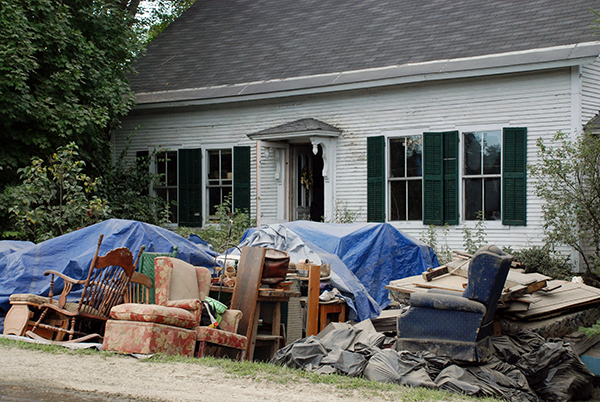 Across the street, another home was half-hidden by debris with a lonely pair of mud-covered rubber boots testifying to the people that had lived there. 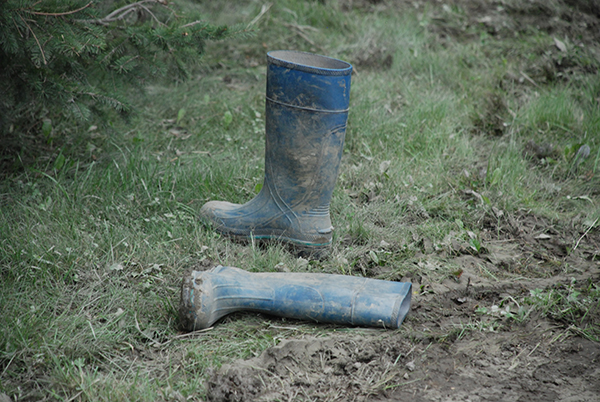 Further down Route 100, on the border of Waitsfield and Warren, the Mad River had taken out half of the road. 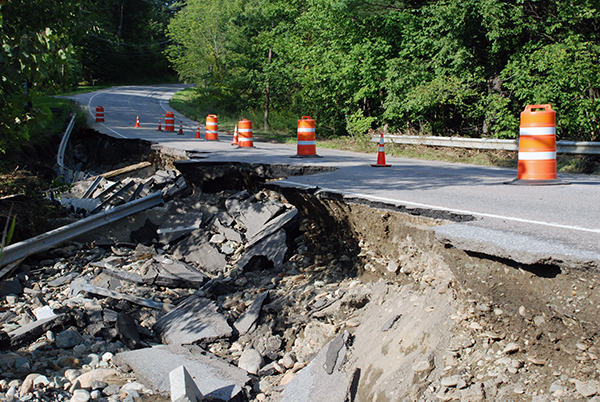 Nearby, American Flatbread, a unique and very popular Mad River Valley institution featuring an outdoor bonfire, indoor clay flatbread oven and walls covered with Bread and Puppet art, had also succumbed to the raging mud.  As we passed, teams of people were pitching in to help clean out the mess.

Our final stop on Route 100, where we could go no further, was at the border of Warren and Granville.  The road was washed out.  Route 100 further to the south was closed due to water, and Route 125, the only link to the west, was also impassable.  This left the towns of Granville, Hancock and Rochester, all located along Rte 100, cut off from the outside world. 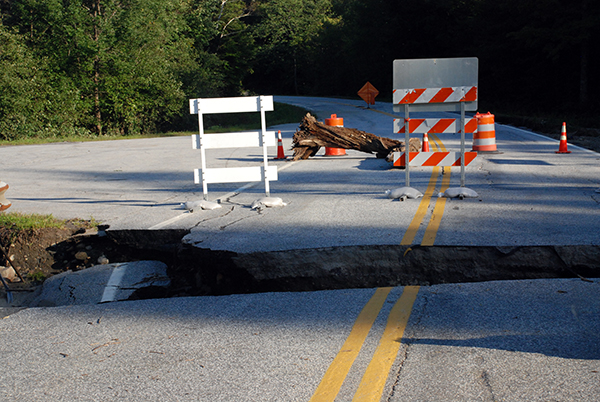 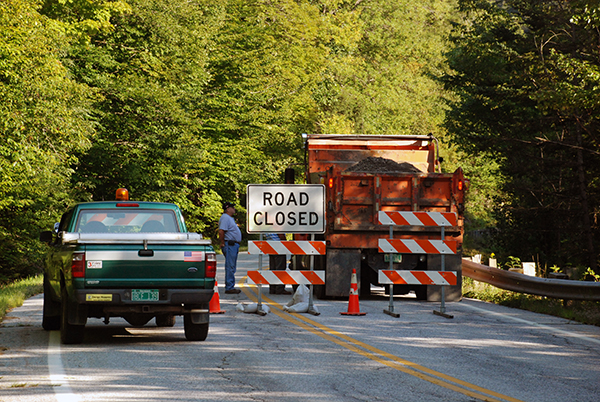 While the record devastation around Vermont has been catastrophic to many communities, the spirit of collective teamwork that we experienced on our journey gave us a hopeful glimpse of what is possible and the mountains that can be moved when people pull together.  As we head into the uncertain future of escalating climate chaos and extreme weather, this spirit may be the one thing that enables communities to come together to find local, small scale, ecologically sustainable solutions to the climate crisis.

The Mad River near Granville–not so mad anymore: 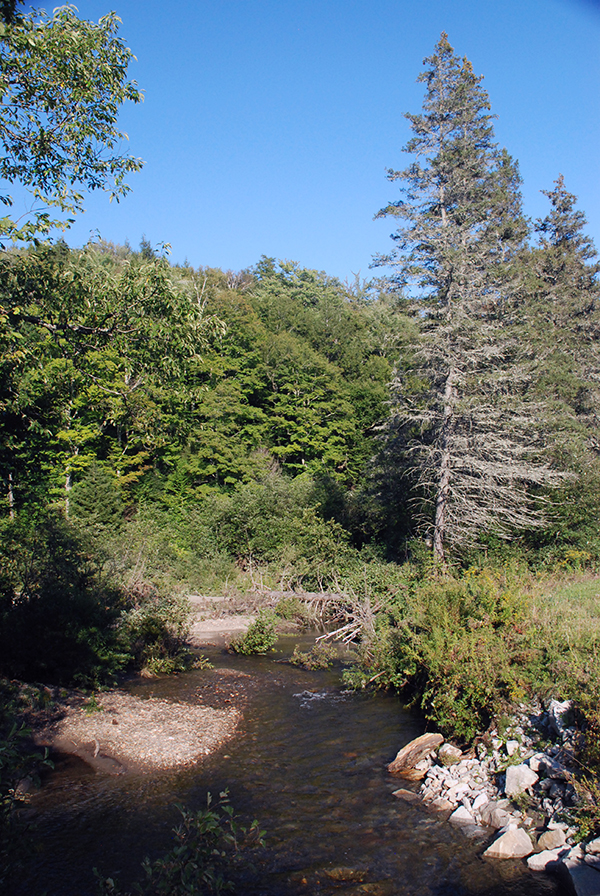